June 3, 2018, 6:38 PM · Theme Park Insider readers' choice for the world's best theme park counter service restaurant has made some changes to its menu. So of course we had to go try the three new meals at Universal Studios Hollywood's The Three Broomsticks.

We tried everything on the menu at the Harry Potter-themed restaurant when it opened two years ago and welcome any excuse to go back and eat there again, so we were looking forward to seeing if the new dishes would live up to the high standard of the restaurant's well-established meals.

First up was The Sunday Roast Sandwich ($17.99), with warm, sliced roast beef on baguette with caramelized onions, English Cheddar, horseradish sauce, and garlic pickles, served with choice of potato wedges or salad. 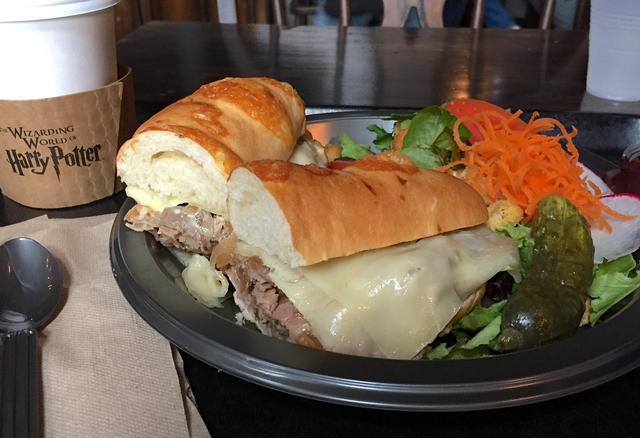 It's basically the restaurant's Sunday Roast prime rib meal on bread, with a slice of cheese and some amazing onions to round out the flavors. It's a bit sloppy with the jus and onions dripping from the sandwich, which led me to wonder if anyone would post an embarrassing Instagram of me if I licked the plate underneath. But I realized that potatoes would have provided an excellent alternative recovery method, if I'd only been gluttonous enough to choose them instead of the salad. Oh well, this was delicious, and I couldn't imagine any other menu addition tasting better.

Until we tried the Cheese Toastie with Chicken ($15.99), a grilled English Cheddar sandwich with grilled chicken breast, bacon, mustard sauce, and sliced tomato, topped with a sunny side egg and served with choice of potato wedges or salad. 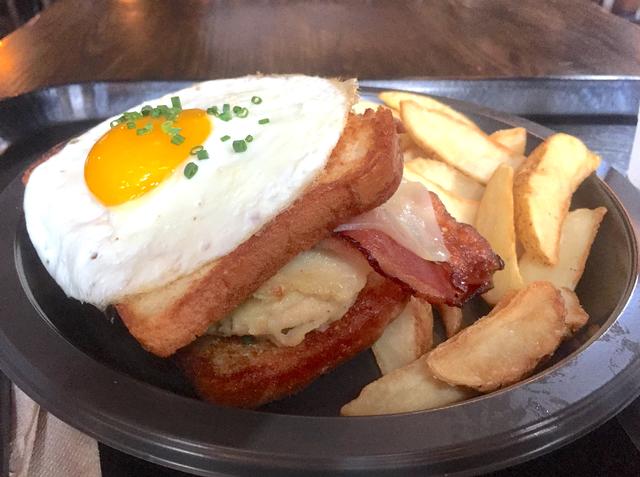 Go ahead and slice the sandwich to allow that yolk to run all over the bread and the chicken before you partake. (Yeah... egg and chicken. Don't think too hard about it. Just enjoy.) Bacon and eggs, with chicken and cheese... on toast? What an indulgence! This time, we learned and ordered the potatoes to sop up all the drippings from this yummy lunch. Okay, maybe that was better than the roast beef. Clearly, a new number one at the restaurant, right?

Finally, we ate the Ploughman's Lunch ($17.99), a charcuterie board with imported ham, salami, and country pate, served with a "variety of English cheeses" (we got a Stilton, a Cheddar, and a Derby), a Scotch egg (!), toasted bread, cranberry chutney, grain mustard, red grapes, a sliced Granny Smith apple, and a variety of pickles, including onions, mini gherkins, and olives. 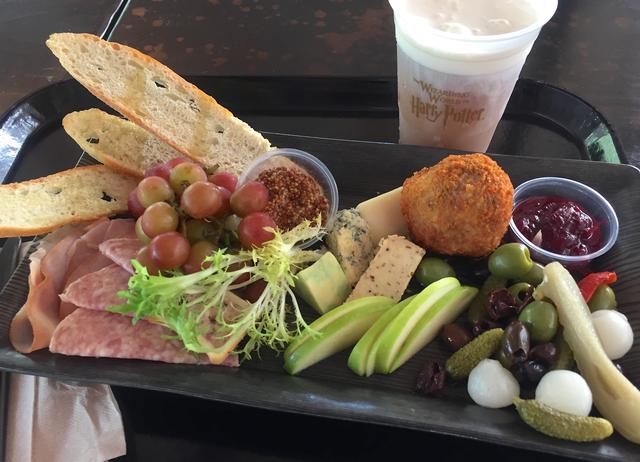 Just. Kill. Me. Now. Because if I find a better theme park counter-service meal than this I'm gonna have to die and go to heaven. Like with the two sandwiches, this meal offers enough food for two people to share, though that would prompt one heckuva fight over who gets to eat the slice of country pate on the platter. Pate? In a theme park meal? While I understand how that might seem as sketchy as an afternoon in the Animation Academy, Universal nails everything on this plate. I would have wanted more, if I hadn't left so stuffed.

Now, while Universal gives, it also takes away. The Beef, Lamb & Guinness Stew that we loved so much on previous trips to The Three Broomsticks is gone now, as are the soups and the turkey leg. You can find turkey legs pretty much anywhere in theme parks these days, and while the soups at the Three Broomsticks were good, they weren't unique. But we will miss that stew here on the west coast. (It remains available at the Leaky Cauldron in Orlando, last I checked.)

Yet the three new dishes at this restaurant are well worth the trade. I'm happy to see a theme park restaurant continue to excel with a well-themed menu, for the pull to backslide into mediocrity remains strong. On my most recent visit, as we looked at the display of menu items that The Three Broomsticks provides in the queue, I had to restrain myself from making a face at the family that complained, "what, no burgers?"

If you really want that, Krusty Burger remains around the corner. But not every restaurant need be the same. Thank goodness, then, that Universal's The Three Broomsticks continues to serve up its magic.

We Ate All the Main Courses at The Three Broomsticks

The soups are gone? What is the vegetarian option then? My favorite theme park counter service is definitely Satu'li. More than one veggie option and yummy food!

Hope those two sandwiches make it to the Orlando menu! My husband and I are already big fans of the Ploughman's... we've shared it several times at the Leaky Cauldron. Definitely different from your usual theme park fare... and absolutely delicious!

No loss since I can’t stand to eat lamb. The gamey taste is too nauseating.

I'm pretty sure the Ploughman's Lunch has been around in the Orlando location for awhile. I'm surprised it's a recent addition over there. Honestly, I could just eat an entire plate of Scotch Eggs. I seem to recall that they also serve them at Finnegan's across from Revenge of the Mummy. The Bird's Nest is also amazing there.

This post reminds me of your Holiday Food review. I was hoping upon hope they'd serve it in Orlando....but nope. Hollywood had the lead on it for awhile. I believe they started doing holiday menus at the tail end of '17, however.

All the food options are so good I almost forget about the rides. Kudos on your delicious photography skills. Now I'm going to have to leave my house and find some pickles and Scotch Eggs!

Orlando had a holiday feast at the Leaky Cauldron last year, but it had sausages instead of the Beef Wellington Hollywood had in 2016. And there was no soup option in lieu of the salad.

I’m not sure in the theming here? The roast beef is possibly British but the Cheese Toastie with egg and chicken???? Never seen that anywhere in the U.K. for consumption in the Muggle world. The Ploughman’s isn’t much better, more like a trip to supermarket deli counter than actual British pub grub which I though the menu was trying to reflect. However it’s not buggers or pizza so I’m not complaining to loudly.

I've seen (and had) a Ploughman's Lunch in pubs and cafes in Britain. The cheese toastie? Haven't seen that, but it would not look out of place on a pub grub menu which is often written on a chalk board propped up on the end of the bar. Remember, England is the place where baked beans are eaten for breakfast and pancakes are eaten for dessert, and a PBJ is considered as exotic as a Scotch Egg is here. They all look terrific!

I know Disney is trying to cater to the gourmet food truck crowd, but come on. I'd almost rather that Disney opens it up to real food trucks, to me it would have a more genuine California vibe, the weird food that Disney comes up on their own just seems like they're trying too hard. Maybe not real trucks, but put them in stands (Disney calls them 'marketplaces', another example of them trying too hard).

Being from the U.K. you tend to see the eggs at breakfast at cafes, you see ploughman’s usually at pubs ect for lunch.

Being from the U.K. you tend to see eggs like these at breakfast time in cafes ect and certainly not like this example.

The ploughman’s are usually served in pubs ect for lunch but it does not look like this version.

And the Sunday roast is not that either.

Not really what you have here I am afraid.

Sorry to burst the foodie bubble, but being a Brit and eaten enough pub grub to last 2 lifetimes ... !! all 3 items shown are a million miles from what you would get in the UK.
I’m actually trying to workout what they are supposed to be.
Maybe the toastie is trying to be a bacon and egg butty, but never had a butty toasted. Could be a loose representation of cheese on toast .. with ketchup ... Mmmmmm ... but I digress. But no, I have never seen anything like that in the UK, especially in a pub.
Beef and cheese sandwich ... maybe in a subway ??
.... and if I ever ordered a ploughmans in my local and they served me that ... they’d be fighting in the bar .... :)
Yeah yeah I know ... just lighthearted banter, but it cracks me up when I see what’s being served as, I assume ?, English pub grub in the restaurants at the parks.
...... and you can’t serve pub grub without some decent beer either. The 2 are inseparable.

Oh dear Universal, you haven't a Scooby what we Brits eat or what items go together. Very poor dishes with zero authenticity. Shame on you!

Food is always adjusted based on the preferences of the people being served. The notion of authenticity is highly subjective, due to variations that time, location, and people naturally impose on food. The only thing that really matters is that people are buying and enjoying it. 3 broomsticks is one of the best theme park restaurants I've ever visited, both in themeing and in how delicious and unique (for a theme park) the food is.

I have disagree Daniel. Both Potter lands have raised the theme park bar because of their amazing attention to micro-detail in every aspect of everything and that should also include these additional dishes. Being "palatable" is not justified in this case. They have to be authentic. You will not find any of the additional dishes in any UK eatery. Therefore, they serve no purpose in the 3 Broomsticks and have a negative effect on the whole experience.....which is designed to maximise believability.

I understand ProfPlum, it's not exactly what youd typically find in the UK. I'll take your word for it although I doubt you've been to every eatery in the UK to make such a claim. In any case neither will you find an actual 3 Broomsticks restaurant or butterbeer there. It's ultimately fantasy so I think a little imagination is ok.