The Surfside Inn, which is going up on the site of the former Wet n' Wild water park, will be Universal's lowest-priced hotel with rates starting as low as $73 a night. But to get that low rate, you'll need to book for at least a seven-night stay.

Volume pricing long has been a thing for theme park tickets in Orlando. Whether you are visiting Universal Orlando or the Walt Disney World Resort, your price per day will decrease with the more days you put on your ticket. A one-day ticket that starts at $115 can drop to $45 a day if you make that a five-day ticket at Universal Orlando, for example.

Now Universal is applying that same pricing strategy to its newest hotel. Universal and Disney have always packaged deals that gave visitors a break on price for staying longer, but I've not seen a theme park hotel go as strong on volume pricing as Surfside Inn is offering. Clicking around Universal's hotel booking website, I see rooms that start in the $110s (before taxes and fees) for one-night stays dropping into the $70s (ditto) for seven-day visits. That's a huge discount — designed, of course, to entice budget-conscious visitors to make Universal their home base for their Orlando vacation, instead of at the Mouse House down I-4. (Good luck finding on-site rooms at Disney for 70-some bucks a night anymore.)

The new rooms at Surfside look pretty sweet, too. The beach-themed resort will offer standard rooms and two-room suites. 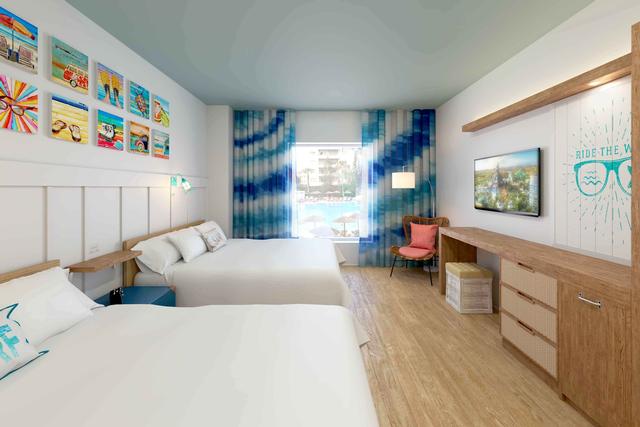 All rooms will include Early Park Admission benefits to The Wizarding World of Harry Potter at Universal Studios Florida and Islands of Adventure and to the Volcano Bay water park, one hour each day before those open to the public. (Universal Express Unlimited remains a benefit only for guests staying at the Portofino Bay, Hard Rock, and Royal Pacific.) A second Endless Summer hotel, Dockside Inn and Suites, will follow Surfside Inn in 2020.

If you are keeping track, Universal's sixth hotel, the Aventura Hotel, opens this August, joining the Sapphire Falls, Cabana Bay, and the original three.

"Good luck finding on-site rooms at Disney for 70-some bucks a night anymore."

Good luck finding ANY decent hotel rooms in Orlando for that price, whether on property or off, especially on weekends during peak visiting periods. The average room rates have nearly doubled in the past 8-10 years, and the increases have been even more dramatic for off-site hotels.

However, despite these great rates, I would be hesitant to book a stay at Endless Summer until they provide details on the amenities. For instance, do guests really get Early Entry like Cabana Bay/Sapphire Falls/Aventura (I know it says they do, but I have a hard time believing they're going to squeeze another 3-5k people in the parks during the extra hour), and how is transportation/parking going to work at the new resort?

It's buses, but yeah, the devil is in the details there. How many buses? How often? And how long will guests have to wait, both ways?

And will there be a safe walking option. Currently, you can walk from that side of I-4 to UO without too much issue (it's a little dicey at night, but not what I would consider dangerous), but will they be creating a dedicated walkway (similar to what they have on the current property), and/or can guests walk to the water taxi stand at Sapphire Falls/Aventura.

Also what types of amenities will be available at the pools? Currently, Disney uses its pools to differentiate between resort levels. Value resorts have pretty plain pools with just a few water features, where mods have fancier pools, while deluxe resorts have pools with slides, hot tubs, and other prominent features. I'm really not a fan of booking a room for a hotel that has just recently started construction.

Lots of questions that will be revealed in time. But what can be said right now is there will be some great prices available. For someone visiting with a tighter budget seems like a great option with early park admission.

I've honestly never had a bad experience on Cabana Bay's buses once. There is always a bus pulling up as one leaves & even though this new resort is across the freeway it will still be closer than ever than most WDW Resorts.

All my friends, who are HUGE fans of Universal Studios Orlando, would never stay SEVEN nights at USO. Three nights is really stretching it. So there goes the discount!

Not to mention, the off-property inconvenience. That said, Universal is feeling out the City of Orlando for a possible copy-WDW gondola system.

Was thinking same thing bout length of stay. What do you do at Universal for 7 nights...vist Walt Disney as well ? Going in October for Halloween Horror Nights on Columbus Day weekend haven't book yet but we'll be staying on property as always.

I have to agree, as a huge UO fan, seven nights is too much. That price is nice, but the allure of UO is the unlimited express pass, which you don't get there. I would say at that rate one could argue that you could use that hotel as a base of operations, but getting to Disney from there on a daily basis is practically out of the question. I will say I love the Royal Pacific for many reasons and have stayed there multiple times. The walk is wonderful. It is 15 minutes from the pool to Forbidden Journey, and the staff has always been great (but the cost is significantly greater that $70/night).

"I have to agree, as a huge UO fan, seven nights is too much."

I agree, but if you consider a 3/4-day visit to UO with 3/4 days at other area attractions (including WDW), it's quite a deal. As I stated earlier, the price point of this new resort is lower than virtually every off-site hotel in the theme park districts. So instead of staying at a UO hotel for 3 nights and then moving to another off-site hotel (or perhaps a WDW resort) to visit Sea World, Legoland, BGT, Fun Spot, or WDW, you can stay in one spot, and still take advantage of the Early Entry perks provided for the UO parks. I don't think this resort is taking aim at WDW resorts, but is going right after all the off-site hotels that are over priced, especially when you consider so many of them are charging "hidden" resort fees that make what appear to be $50-60/night hotels turn into $80-100 a night rip offs.

You have to think too, UO is going to get to work on their third dry gate sooner than later, which combined with the water park and the main campus will make a full week at UO sustainable. These hotels are going up to prepare for that crush and UO's full out push to catch and pass Disney once and for all. Can they do it? Probably not, but they're gonna make an incredible amount of money trying.

Here's how to beat the heat on a scorching Disney vacation