June 13, 2018, 10:54 PM · Anyone accustomed to visiting Six Flags parks is acutely aware that the chain holds the rights to DC Comics characters at theme parks. Until recently Six Flags Great Adventure featured rides named after Batman, Superman, The Green Lantern, The Joker and Harley Quinn. And now Cyborg has been added to the cast of characters. Great Adventure’s new attraction for 2018 is Cyborg Cyber Spin, located near the astonishingly good Justice League: Battle for Metropolis interactive dark ride. 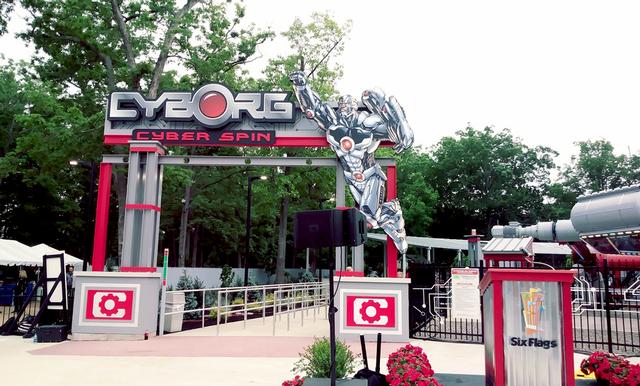 Designed to mimic the movement of a gyroscope, Cyborg Cyber Spin rotates on three separate axes. The gravity-defying triple box design which enables forward, backward and sideways gyration was implemented several years ago by Switzerland’s ABC Rides but to the best of my knowledge there were no installations in the USA until now.

Cyborg stands seven stories tall and operates with a gondola seating 24 riders, 12 facing one direction and 12 facing the opposite direction. The gondola ascends slowly but picks up momentum quickly, swinging the riders within seconds of being dispatched and then flipping them every which way. As a 66-year-old prone to motion sickness I approached this ride with some trepidation but I’ll try almost anything once short of bungee jumping or jumping out of an airplane. 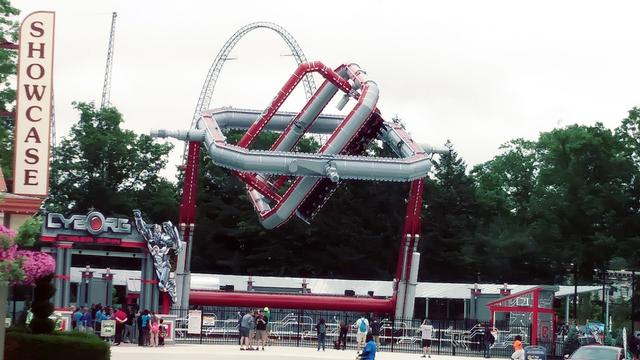 Any trepidation I felt about riding this contraption was quickly dispelled. While the ride is disorienting – not to mention more than a little disconcerting – I did not find it at all dizzying. What it was is unpredictable, gripping and refreshingly novel. It offers nice hang time and puts the riders into some precarious positions. At one point I found myself tilted to the left at an absolutely insane angle. I can't say that positions such as this are exactly comfortable; at times I found myself squirming but that's what the ride was designed for. The ride is variable according to riding position, weight distribution and ride cycle, the last of which is obviously controlled by the ride ops. I rode three times, twice from the front side of the gondola and once from the back, and each ride was different from the others. My final take? This is a fun ride whose compact footprint makes it perfect for the location in which it was erected. 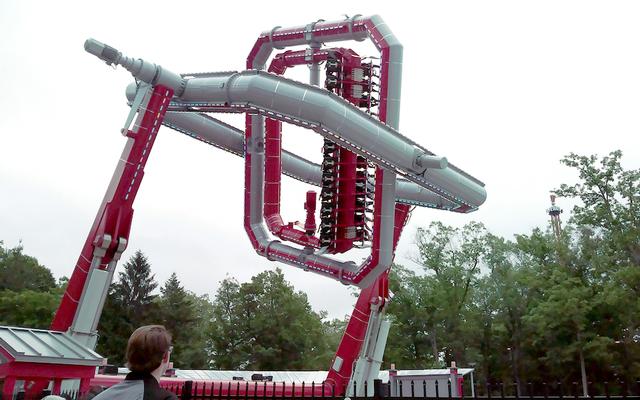 Let’s go for a spin.

What an odd contraption, but it definitely looks like a refreshing change from the standard top spins, pirate ships, and frisbees.

You noted that the operator has control over the ride cycle, which I don't think is accurate. I know operators have full control on all the Giant Loops Six Flags has installed in virtually every park (the operator has a joystick and can speed up or slow down the train to maximize the cycle), but I have a hard time believing a ride system as complicated as this (three axes of motion) would be put in the hands of a teenager. It also doesn't look like the gondola is free-swinging, meaning weight distribution would not affect the ride cycle (unlike a top spin where you can sometimes get an extra flip if all of the riders are on one side). The reverse POV doesn't really show how the system works, but my understanding of the ride is that all three axes are fully controlled by the PLC.

@Russell Meyer Interesting point, Russell. I have no way of definitively verifying or contradicting this but could not see how, other than by somehow altering the ride cycle, it's possible to make each ride different from every other ride. My second ride was nothing like my first - it was less intense whereas my third ride was more intense than either the first or second - and from what I've observed, the ride cycle is not always the same length. There could be another explanation although I don't know what it is. As to weight distribution, I'm merely repeating what someone in the media department of the park told me. You are absolutely correct that the gondola is not free-swinging and for most of the ride it rotates rather than swings but does swing at the beginning and end of the ride so I suppose that weight distribution could make a difference. I'd have to know more about physics to further address this issue.

I do know that Huss provides a number of different ride cycles for their Top Spin attractions (Twister at SFGAdv), and the PLC (programmable logic controller) can be setup to run a single ride sequence (typically when the park wants to utilize special effects like The Crypt at KD), an alternating series of ride sequences, or a random series of ride sequences. I'm not sure if the PLC on Cyborg has a random or alternating ride sequencer, but that would be the most likely reason why you were seeing varying ride times and experiences. I guess it is possible that the ride op could be manually controlling everything, but it just doesn't seem likely in today's world of computer controlled attractions. Temporary carnival rides and the aforementioned Giant Loops (El Diablo at SFGAdv) are the only attractions that I've ever seen in the US that are manually controlled by the ride op (even kiddie rides are almost always cycled through a PLC).

Bobbie, you said you're 66. I'm 61, and that is one ride I will not be riding. I know what you wrote, but watching your face on the video told that there were a few moments that you thought "This is NOT a good idea!" Terrific article, as always. You're braver than I am!

Thanks, James. I must admit that there were a few moments when I wondered what I'd gotten myself into but as the ride progressed I felt confident that I wasn't going to pass out or throw up or deal with similar scenarios I had imagined. Brave? Nah. Brave is relative. For instance, a lot of parkgoers think nothing of riding SkyScreamer but being a couple of hundred feet in the air on a swing attached to a chain is for me frankly terrifying. Getting apprehensive about riding Steel Vengeance - your report was excellent - after hearing so much about the restraints being excruciatingly painful.

The worst discomfort/pain was on my upper thighs where they hold you down into the seat. It was uncomfortable, but to me it was only towards the end where there are a lot of bunny hills. That was also before they installed hand hold bars, which I have no idea if they help the pain or not.

My biggest worry about AJ and the rest of the TPI invasion happening the week after next? Long range weather forecast says rain. Figures. Maybe the rain will be a blessing- it'll keep crowds down, and CP does a good job of getting coasters back up and running after the rain ends.

TPI invasion? It would be nice to meet some of those folks including you. Haven't booked my trip yet; was going to do it earlier but wanted to wait until 3-train operation and Fast Lane access were restored. I have 2 FB friends in Ohio, one of whom I ran into at Silver Dollar City last month and one of whom I've never met. As to the restraints, I know someone who's a hardcore enthusiast with close to 400 coasters to her credit and she said that the restraints were so painful that if offered a re-ride she probably would have declined.