June 14, 2018, 2:37 AM · The Oriental Land Company, the owner and operator of the Tokyo Disney Resort, today announced with The Walt Disney Company a major expansion of its Tokyo DisneySea theme park, which will add a new themed port and a hotel.

The 250 billion yen (US$2.27 billion) project will take over the surface parking area behind Tokyo Disneyland, across from the Sheraton hotel. The new DisneySea "port" (aka land) will be accessed by a pathway between the current Arabian Coast and Lost River Delta ports and will include three mini-lands, devoted to Frozen, Tangled, and Peter Pan. 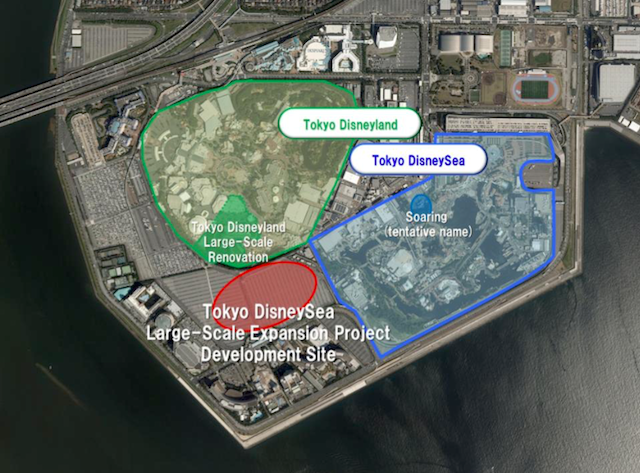 The port also will include a 475-room hotel, with two restaurants. The project is scheduled to be completed in 2022.

The Tokyo Disney Resort in 2014 announced a Frozen-themed Port of Arendelle, to be built on the other side of Lost River Delta, but Oriental Land abandoned that plan a few years ago. Currently, Tokyo Disney is building an installation of Soarin' in DisneySea, but that was the only major new attraction under development at the park, until today's announcement. 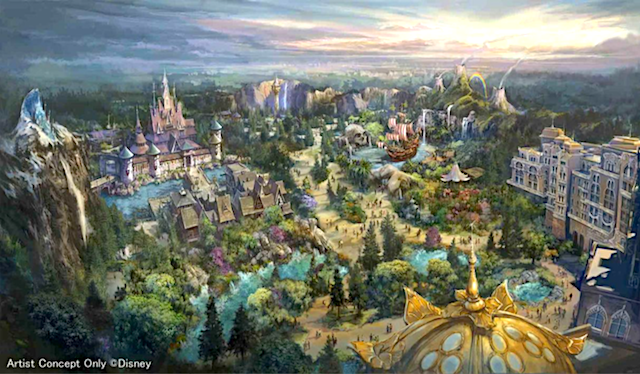 In addition to the hotel, the as-yet-unnamed new port will include four new attractions and three restaurants. 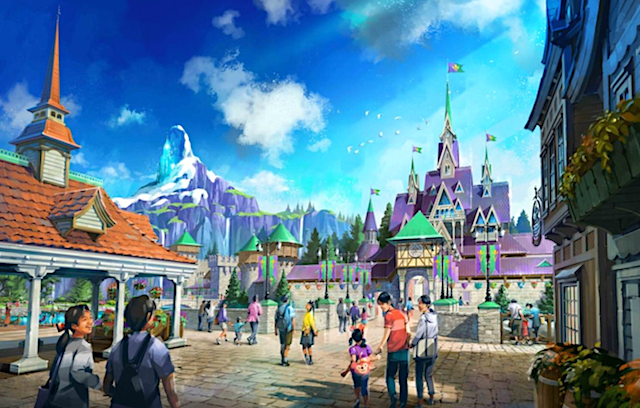 The Frozen section will include a boat ride that tells the story of Anna and Elsa, as well as a restaurant inside Arendelle Castle. 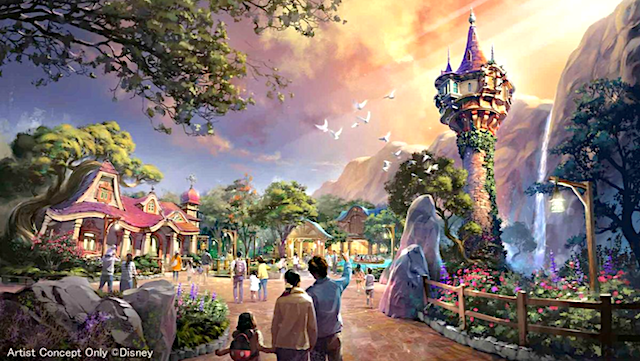 The Tangled area will include another boat ride, this one depicting Rapunzel’s "best day ever" as she goes with Flynn to the lantern festival. A Snuggly Duckling restaurant will also be part of this area. 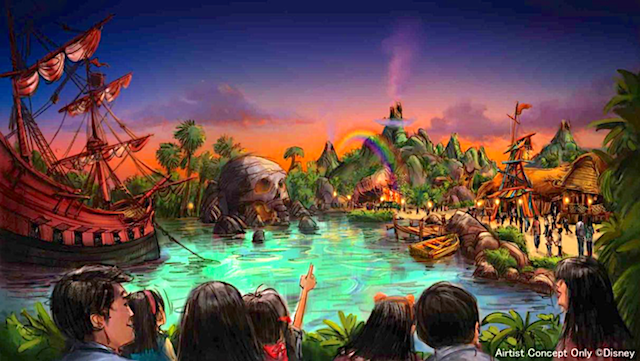 The Peter Pan section will include two attractions: a next-generation version of the flying boat ride over Neverland that "features iconic music and dynamic 3D imagery of the characters from the film," as well as a Pixie Hollow attraction. There will also be a Never Land restaurant in this section. 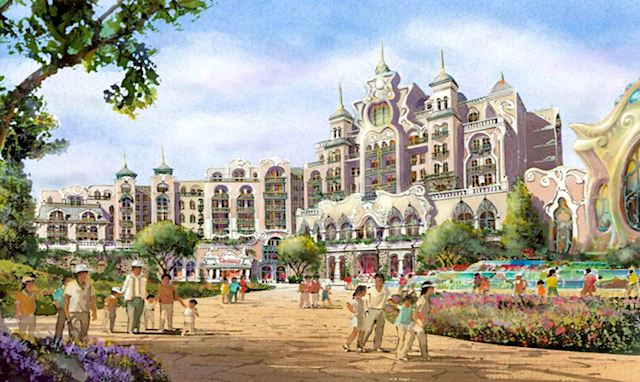 As for the hotel, Oriental Land's press release says, "Park-facing rooms will provide beautiful views of the port's majestic landscape, affording Guests a magical experience that can only be had at this hotel. The Disney hotel will offer 475 deluxe-type and luxury-type guest rooms, with the latter providing the finest accommodations in Tokyo Disney
Resort."

Over at Tokyo Disneyland, the resort is expanding as well, with new Beauty and the Beast and Big Hero 6 attractions coming in 2020.

I am very happy that Disney Sea receives a major expansion, and I am sure that it will strengthen the park's reputation as one of the best theme parks in the world. It will also enhance the park's offerings for children and families.

However, I would have loved to see the addition of an E+ ticket ride in the spirit of Shanghai's Pirates ride, Animal Kingdom's Avatar ride, or Disneyland's new Star Wars ride. Maybe the upgraded Peter Pan ride will be in the same league.

So...does this mean that the Tokyo Peter Pan's Flight will be closed? Or will still stay? I dunno, it's kinda confusing overall that OCL has decided to use two properties that couldd very well fit more in Fantasyland. Frozen it's kinda of the exception, since that one was planned a long time ago , but the other two...what does Tangled even have to do with something remotely maritime or adventure-ish?

So what goes in Peter Pan’s place in Fantasyland?

I really do love how Disneyland Tokyo has really embraced the idea of putting hotels within their parks to add to the theme around the lands. Genius idea and great utilization of land. This looks beautiful!

It looks like the Frozen Sleigh coaster from HKDL isn’t present on the picture or the description which is a shame in my opinion as it’s not a boat ride like the sounds of the other new rides in each area are. At least it’s not Star Ward land which would have been the cheap and easy option. New original rides are much better, along with the Beauty and Beast land/attraction TDR is now making itself irresistible.

So...does this mean that the Tokyo version of Peter Pan's Flight will be closing? Or is it going to be an entirely different concept from the one at Disneyland? I mean, the idea of having NeverLand in TDS is fitting enough but...why built another Peter Pan ride having the one in Fantasyland?

Also, I understand Frozen having finally a ride there since it was planned from the beginning and it kinda transports you to old Norway the same way Arabian Coast transports you to both Aladdin and old Arabia, but what does Tangled have to do with anything remotely maritime or "adventuri-ish"? I think it would've worked better at Fantasyland but whatever, we'll see how this goes.

Very excited for this nonetheless

Tokyo is now the fourth resort to get Frozen. Is Disneyland Anaheim next?

I guess Star Wars is not as popular in Asia. Based on box office, its a bust.

Yeah, I wondered about that, too, Rob. To the point where I had to go double-check that TDL actually does have Peter Pan's Flight. (It does.) The Frozen ride sounds a lot like the Epcot one, too.

I'd take Disney Tokyo announcement's with a pinch of salt. They often make huge announcement then don't carry on with them at the drop of a whim.

The Frozen attraction land was announced 4 years ago and nothing progressed.

This is clearly designed to be DisneySeas Fantasyland. I think the themeing is a little forced and unfortunately DisneySea will lose it's unique non fairy tale/ non IP feel. It will also lose the Disneyland-like nearly perfect symmetry that it has with a circular design with the water taxi going around.

Don't forget Daniel - Mermaid's Lagoon has been at TDS for maybe since the park opened. Not exactly sure when it opened, but I'm positive someone on here will correct me if I'm wrong. The Mermaid Lagoon is fantastic and just as immersive as any of the other lands at the park. I don't think either of the parks in Tokyo are capable of doing anything other than hitting home runs.

It's a brilliant move. They should build a larger version of Pan back by the old motorboats in Disneyland CA to free up space by the castle.

I love the way this plays into what TDS is, which is a celebration of the life-affirming nature of water.

Note the concept art all include three different bodies of water. Peter Pan is centered around its trademark lagoon, of course, and it's a story concerning pirates, a perfect fit for TDS. Tangled is the least concerned with water of the three, but it features a centerpiece waterfall, which of course appears quite similar to golden hair being let down from a tower. And Frozen not only features a moat around Elsa's castle, but is literally about solid water - the way ice maintains Arendelle's lifestyle, but can also be destructive.

I also love that all three centerpiece rides will be boat rides. I've seen some criticism of this, or perhaps just disappointment that a thrill ride won't be on offer, but 1) TDS already has three top notch thrill E-Tickets, and 2) the park is about water. Why shouldn't a Disney park about water have a bunch of boat rides?

This expansion is a beautiful way to bring more IP into the park (why have a Disney park without Disney characters, I say) while seamlessly integrating it with the park's concept, which is unique and worth preserving. Thumbs way, way up to Imagineering and OLC for this, I can't wait to see it someday!

I also think it's a total fallacy that TDS is some IP-free park or ever was. Indiana Jones and Little Mermaid have been present in the park from the start, and Toy Story, Finding Nemo, and the major WDAS canon characters from Fantasmic! have now made their way in with beautiful integration and little fuss.

Excellent. A bit of excitement visits me...

"and will include three mini-lands, devoted to Frozen, Tangled, and Peter Pan"

And now my interest is gone.

Tokyo Disneyland Resort is sure expanding. The announcements today are exciting. Even though they already announced Frozen, it’s nice to know what type of ride it will be. Peter Pan and Tangled sound great as well. Finally, a Disney park that will feature a Tangled attraction. The first of its kind.

Tokyo Disneyland is not only expanding with these lands and attractions...they are building other ones as well. Such as Star Wars, Marvel, and as well as Beauty and the Beast, and Big Hero 6. Tokyo Disneyland is already the best Disney resort in the world. They just solidified it even more.

I love Disneyland in California. It’s still my favorite. I’m looking forward to Star Wars and Marvel. But with all the new additions being added to Tokyo, they need to step up their game. Why can’t these rides and attractions be at Disneyland? I guess I’ll have to make the 15-hour plane ride again from New York to see it when it’s completed. I’m hoping it comes to California; so I can take a 5 1/2 flight instead.

I really love the Tangled attraction at Magic Kingdom. There is no line, and when I’m finished, I feel like I’ve taken a load off. Then I flush, wash my hands, and move on to a different part of the park.

I was skeptical asto how a park designed to have ports representing the seven seas could possibly add an eighth port - but then I realized, with the land comprised of Tangled, Frozen's Arendell, and Peter Pan's lagoon, this eighth port is obviously a port of FantaSea

I see a possible 2nd entrance opportunity at the back of each park connecting the two parks that can be tied into the new proposed hotel, the new DisneySea port and the new Fantasyland expansion! A full day of Disney fantasy could be offered, staying two nights in the new art nouveau inspired "fantasy" hotel, and from there, starting your day in Arendelle, Never Land and Corona, the port kingdom of Tangled (an area with an obvious water and/or sea tie in, "Hellooooo!?!"), then seamlessly jumping over to Disneyland through the Beauty and the Beast mini land to enjoy all that is there with Belle and Beast, as well as visiting the rest of existing Fantasyland, then ending the day back at DisneySea in Mermaid Lagoon with Ariel and Arabian Coast with Jasmine and Aladdin (AND Sinbad and Chandu!). Much like Universal Orlando Resort's "day of Harry Potter" itinerary jumping between UO and IOA by way of the Hogwarts Express, TDR can offer a "day of fantasy" itinerary jumping between TDL and TDS through the possible 2nd entrance. One could have a full day of FANTASY OVERLOAD!

@Keith- That is a great idea.