Disney announces new Inside Out ride for Pixar Pier

June 22, 2018, 4:28 PM · The day before Pixar Pier officially opens to the public, Disney finally announced the final piece of the newly re-themed land.

Inside Out Emotional Whirlwind will open in the "Inside Out" neighborhood on the far western end of Pixar Pier next year. Standing on the site of the long-removed Maliboomer, the Emotional Whirlwind ride will be the first new attraction added to the land that used to be known as Paradise Pier since Toy Story Midway Mania opened in 2008. 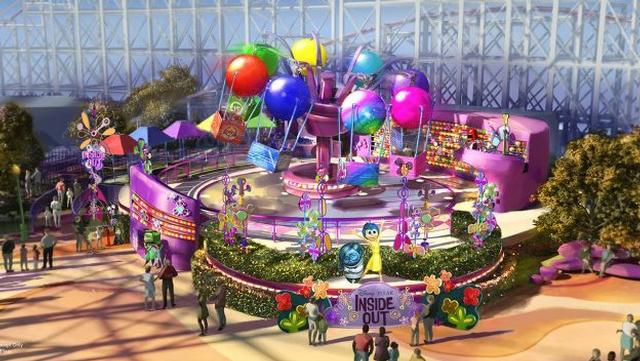 If the ride looks somewhat familiar, it's just Flik's Flyers from It's a Bugs Land, reskinned to make the leaf "balloons" look like Core Memory balls from the 2015 Disney/Pixar film. Also next year, Disney California Adventure will reopen the former King Triton's Carousel as the Toy Story-themed Jessie's Critter Carousel, with new ride animals based on the virtual critter prizes in the neighboring Midway Mania ride and the "Woody's Round-up" TV show in Toy Story 2.

We previewed Pixar Pier yesterday, taking a ride on the Incredicoaster and trying all the new food. Take a look at our Pixar Pier Instagram story from the day for ever more detail about DCA's "new" land.

What on earth?? What went wrong with this project???

I've been a huge fan of virtually every WDI installation in the last decade, so please don't take this as just a hater hating. I am deeply excited for Toy Story Land, for god's sake. This is appalling. What kind of name is that? "Emotional Whirlwind" doesn't sound like a fun theme park ride, it sounds like a reason to visit a psychiatrist. And it's as cheap and tacky as the rest of the area. What a horrible failure by WDI and Anaheim management.

Reskinning rides from Its a Bugs Land???? This is really disappointing

I'll go the other way and say that something is better than nothing. And since Bug's Land is going away why not repurpose it. The name, eh.

Tacky. Poor use of a reskinned ride that could easily have been a new installation and gone up in time for this Summer’s opening, had they spent a little extra. And what’s worse, they’re taking a deep film that could have gotten a lovely dark ride... amd dropping the ball entirely (especially since they have an old parade building behind that land that could hold a decently-lengthy dark ride).

I'm not disappointed by this attraction, I'm disappointed by the fact that Disney couldn't have such a small attraction ready with the rest of Pixar Pier. Honestly, I wouldn't be surprised if the Disneyland Resort takes an attendance hit this year as there really is very little reason for a non-local to make a trip before 2019.

I certainly hope they do. Rewarding them for this abomination of an installation would be incredibly disappointing.

Frankly, Radiator Springs Racers is the only reason to visit DCA at this point. That was true before Pixar Pier of course, but they desperately need another hit and it just isn't coming. Let's hope Not Marvel Land delivers something.

Leaving aside the idea of whether or not "amusement park" is a good choice for a theme, DCA has never--not once--executed that theme with any conviction. Even the DCA 2.0 improvements were sort of a half effort, never really transporting you to the turn-of-the-century, leaving in place several, modern, turn-of-THIS-century elements from DCA 1.0. Puking IP all over it might sell plushies and slushies, but it's certainly not Disney's best, most immersive work. This is Cedar Fair level of IP investment (although, at Cedar Fair, at least the coaster would be much more 'incredible.')

Also, the Pixar overlays seem to have taken this out of theme and into pastiche? I'm unsure how to put this--from the pictures, videos, and walk-arounds, it feels that Disney has added a lot of stuff, but the stuff doesn't really gel into a theme? It just kind of seems like one of the Value Resorts at Disney World, where they threw props, paint, and artist sketches at basic, inexpensive architecture.

In particular to the Disneyland Resort and DCA, Paradise/Pixar Pier-Park is a design flaw. With the lake, it takes up a lot of space. The large coaster doesn't block out the external views of Anaheim, so you're not transported anywhere but a land of power lines and mid priced chain hotels. You could probably get away with the land at Disney World, where there's tons of space (I'd send it over to Dino-Land as an extension of Chester and Hesters, if they were looking to retain their investment in the rides,) but, due to the limitations of space in California, it's never really going to work in DCA, no matter which IP they drag it out in.

I'll say this: from a business perspective it makes tons of sense. For a really small amount of "decor money," you get a whole land dedicated to an IP. If Pixar Pier stops being appealing in a decade, a six-month re-skin into a new IP is neither time-consuming nor expensive. And since folks keep coming, there's little incentive for Disney to change.

Pixar Pier is the equivalent of Toy Story Land. It is what it is. I thought they should just raze the whole land and start over, but the land is anchored by Toy Story Mania, which will NEVER go away since it’s so popular. So this is the best they can do to keep Toy Story Mania while advertising other Pixar characters.

I'm honestly surprised that
"Phase 2" of Pixar Pier won't be finished until 2019. It definitely doesn't seem like there's more than 6+ months left of work to do. Isn't all that's left to re-theme two pre-existing rides and build a candy store? Surely this could all easily be built by Christmas if they wanted to. What's the delay?

+1 to everything Miami said. That's really been a core issue with DCA from the start, lack of conviction. That very same conviction is what makes Cars Land stick out like a sore thumb, like it was dropped in from a way better park.

I really like Pixar movies, I really would love to step into their world and enjoy world class Disney rides in those ip's. For the money the Disney company is asking to "enjoy" this Six Flags mediocrity it's painful. this is not a place I want to spent my time in, eat or buy merchandise from.
A real fan should always question what the company they spent their tourist dollars on is doing and be critical. The "it's better than nothing" reaction kills the brand and it's quality. I shout out Universal for Fast & Furious and I shout out Disney for Pixar Pier (and the terrible party thing at MK).

Yup. And from what we've seen on DHS' Toy Story Land, that appears to be a high quality addition with some real heart put into the design and a pretty kickass family launch coaster to boot. Even with the budget cut from the original project, Orlando looks like they've delivered a winner that will fill a niche within that park. Anaheim, meanwhile, continues to slap on half-measures and ask you to drop enormous dollars to see them.

My nephew is SUPER EXCITED for this ride. He doesn’t care if it’s a retheme.

Can’t understand adults hating on a children’s ride. IF you have children or a nephew this ride is great!

Despite all the verbiage against DCA, the park’s attendance figures proves TDA is on the right track. CAN’T IGNORE FACTS!

Does DCA still have significant progress to make? The answer isn’t just yes, but HELL YES. Will Marvel land be another huge step in the right direction? Once again, HELL YES!

DCA was always a park that needs to be fixed. So I don’t get why the latest upgrade from Paradise Pier is knocked. DCA 2.0 didn’t upgrade Paradise Pier enough. Pixar Pier actually fixes the issue that Cars Land sticks out like a sore thumb. You guys are hilarious.

You still drop lots of money to see any Disney theme park even when DHS was under construction with 4 rides.

Wait, I thought this was a Six Flags announcement.

"Emotional Whirlwind?" Way too long a name for a kiddie ride. This would have been a much better use of Disney's already trademarked term,"Memory Maker."

OK so the outrage over this is a bit OTT. It's a just kiddie ride and with the closure of A Bug's Land in the fall DCA is going need rides like this for the younger guests. As Stevo B said "it's better than nothing."

Pixar Pier was never intended to be an immersive land on the scale of Cars Land or Galaxy's Edge. I know some people are disappointed that the Incredicoaster doesn't have more bells and whistles but in it's context I think it's a fine upgrade. Also let's remember that Pixar Pier is not finished. We still have Jessie's Critter Carousel, Bing Bong's Sweet Stuff, and the awkwardly named Inside Out ride to come. Some people have complained that it opened without being finished but that's not unusual and given that Summer season is here I appreciate that they didn't wait.

I think the rest of Pier area (called Paradise Park) will eventually be converted to Pixar (minus the Mermaid) and hopefully we'll see some new rides then rather than just re-themed existing ones.

TBH I'd still prefer a visit to Pixar Pier over Toy Story Land any day. I like having a wider representation of Pixar rather than the focus be on just one movie. Also I like that the attractions appeal to all ages rather than just little kids.

My prediction is that the remaining Paradise Park area will eventually be re-themed to an area called Paradise Lagoon, similar to DisneySea's Mermaid Lagoon, but not focussed on just one IP. The area itself will be themed to look like it's underwater with corals and seaweed and rock formations etc. The Little Mermaid and Jumping Jellyfish rides can stay since they're both thematically consistent. Golden Zephyr will be replaced with another flat ride, likely the Whirlpool spinner ride that's at DisneySea (and will also conveniently be another re-skinned bug's land ride) and Goofy's Sky School will be re-themed with turtle-shell shaped cars and will become the cheap DCA knock-off version of Crush's Coaster (and can also help transition into Pixar Pier.) I don't know what'll happen to the Silly Symphony Swings, it's possible it'll remain unchanged because I can't think of any obvious re-theming/replacements like I can with the rest of the area, but let me know if any of you can think of any easy re-theming that would work.

Retheming a used ride from Bug's Land.. and a press announcement. I'm embarrassed now. And... the garish look of it screams "migraine."

So all these Pixar IPs in the one land. Id that Pixar theory confirmed then?

Did Disney succeed or fail with its Pixar Pier?

Disney 'paints the night' with a new Incredibles parade float