Here is where Prohibition will end at Disneyland next year

August 30, 2018, 2:00 PM · Disney just announced that the cantina in the upcoming Star Wars: Galaxy's Edge lands at Disneyland and Disney's Hollywood Studios at the Walt Disney World Resort will be called Oga's Cantina and it will serve alcohol.

Here's a look at Disney's new concept art for the bar: 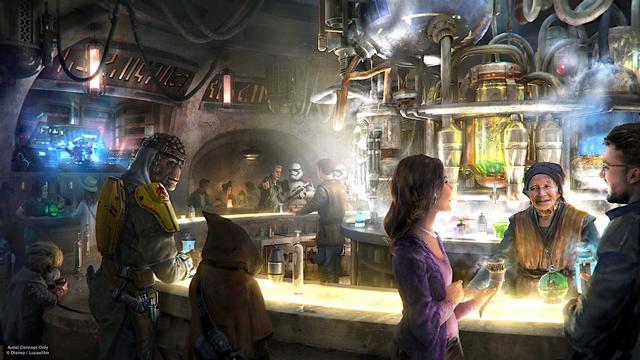 Oga’s Cantina is the kind of establishment that attracts some of the most interesting and disreputable characters in the galaxy. And you never know when a stormtrooper or a familiar face will show up. Patrons of the cantina come from across the galaxy to sample the famous concoctions created with exotic ingredients using 'otherworldly' methods, served in unique vessels. With choices for kids and libations for adults, the cantina will make for a great stop!

The menu of drinks at the cantina will be set, so no ordering a non-canon cocktail or beer. Disney officials also say that any alcohol ordered at the cantina must be consumed on the premises. No grab and go drinks.

While that will contain the alcohol consumption to within the restaurant, not allowing drinks to go with guests elsewhere in the park will mean that the crowd here will not disperse quickly, potentially making this another jam-packed Trader Sam's.

Disney included a fun little Easter egg in today's announcement, too. The DJ at the cantina will be Star Tours' formerly unemployed Captain Rex, the RX-24 StarSpeeder 3000 pilot who crashed out of his job.

"As quirky and talkative as ever, he’s still trying to do his best on the job," Trowbridge said.

The space-age tecnho beat builds toward the drop, and at its peak, Rex yells "Brakes, brakes, where are the brakes?!" and the beat drops!!!

Sweet! The alcohol ban at Disneyland has been outdated for years, because you're only a five minute walk away from the booze at California Adventure, at the Grand Californian, or in Downtown Disney (clearly, I have reasons for mapping this out, haha).

Of course, if you can only buy their pre-made drinks, you can assume no one will be getting boosted--those drinks are always always watered down.

But hey, it's a fun, cool idea, and won't make any difference on the crowds. They were already wasted if they wanted to be.

Rex as DJ was already announced, but maybe no one noticed so they made it sound like a new announcement with more fanfare this time?

On a separate note, I'm really not a big fan of most of the artwork coming out of imagineering these days. This one for example, it's fine for what it is, but it doesn't make me excited to go there. The only part that really says Star Wars to me is the storm trooper in the background. Otherwise it could be any generic sci fi scene... could be from Guardians of the Galaxy. And what's with using photos of people with photoshop filters? The imagineering greats did beautiful pencil renderings with watercolor washes, glorious oil paintings. These newer pieces that come out look too sterile, too plastic. Too photoshoppy.

Sonny Eclipse is gonna be pissed

Interesting choice for Disney to build a location that nobody knows or cares about, when they could have built something as iconic as Mos Eisley spaceport.

By 2020 there will be beverage carts in Disneyland selling booze.

When you spend a billion dollars to add a land I guess you need to squeeze in as many upcharges as you can to get the ROI ASAP. I'd rather they protect the legacy, but they already put a crack in foundation when they decided to serve alcohol at DCA.

I would love to have a blueberry milkshake with rum or bourbon. Call it Aunties’ Special.

I would make it a priority to visit Mos Eisley!

Oga's Cantina, I can wait 5 or more years for the crowds to die down. That and the disservice Disney is doing to the franchise is not making we want to rush to visit. Universal Nailed it with Potterverse, you WANT to visit what you saw in the movies, not some made up crap that sorta looks like the movies.

That concept drawing appears to be missing a thousand or so plain-clothes guests stuffed shoulder to shoulder and dripping in sweat trying to belly up to the bar. This will require some serious crowd control similar to what they employed at Be Our Guest, and is likely to frustrate guests who just want to walk in and have a drink. This place looks no bigger than LaCava at EPCOT, and anyone who's tried to grab a drink there on a busy day knows how crowded and stuffy that tight place can feel.

@Court E - With both Universal and Disney contracting local breweries for custom beers, I wouldn't be surprised to see them come up with something for Galaxy's Edge. However, I have no idea who Disney would use at Disneyland (Ballast Point perhaps, though Anchor Brewing and Bear Republic make far better beer IMHO) - they use 2 different breweries for custom brews at WDW (Tampa Bay Brewing Company at Tiffins and Terrapin in Sa'Tuli Canteen).

Opinions on IF alcohol should be sold in Disneyland aside, the idea that this will be the only place that does sounds like it might end up being a crowded, standing room only mess. I would love to just hang out and watch Rex while drinking an alcoholic blue milkshake...

Agree Mos Cantina would have been a better choice. The animatronic band could’ve popped up every 15 or 30 minutes with the original (or new) music. IF (note the big if) character is per artwork, the central European grandma is not an alien, intriguing or challenging hostess. I will still come for a drink, but hoped for a bit more SW alien experience.

How about a robot bar back to add detail and atmosphere?

That concept drawing appears to be missing a thousand or so plain-clothes "guests stuffed shoulder to shoulder and dripping in sweat trying to belly up to the bar. This will require some serious crowd control similar to what they employed at Be Our Guest, and is likely to frustrate guests who just want to walk in and have a drink. This place looks no bigger than LaCava at EPCOT, and anyone who's tried to grab a drink there on a busy day knows how crowded and stuffy that tight place can feel."

I agree 100%, and I suspect this will be the reason Disney will give when they start selling alcohol in the rest of the park.

The whining is always astounding to me. I am as hardcore a Disney fan as anybody else here (dozens of WDW trips, all of the D23s and every other park except Shanghai) , but I choose to enjoy what is being added to my experience instead of moaning about some kind of outdated, and frankly, invented-after-Walt legacy. Would Walt have wanted alcohol in the park? Probably not. But he also sold bras on Main Street, so times change.
You hear people complain about never having anything original anymore but then complain that they decided to expand on cannon by creating a new location that isn't from the movies. Maybe, let's quit the armchair Imagineering and see what they create. Every body did the same thing with Pandora at AK, and there is some gorgeous work there, despite the cries of "who cares about Avatar" and "this will just be a lame attempt to compete with Potter". The truth is, as Disney fans, we have an embarrassment of riches, and choosing the toxic side of fandom just kills your own joy.

The crowds here will likely lead to other locations serving alcohol very soon. See what has happened in Magic Kingdom for a data point. Alcohol went from Be Our Guest only to all table service locations pretty quickly will likely continue expanding.