Last week, we shared the first publicity photos from inside the "Stranger Things" house for this year's Halloween Horror Nights at Universal Studios in Florida, Hollywood, and Singapore. The photos were from the Orlando installation, but just before they dropped, I was invited to tour the Hollywood version of the maze, now under construction in Soundstage 29 at Universal Studios Hollywood.

Creative Director John Murdy guided us through the maze, which hits all the highlights from around the fictional town of Hawkins, as depicted in season one of the Netflix hit. We weren't allowed to shoot any video and only a few photos, but I have included an edited recording of Murdy's tour below, so you can learn more about what you can expect inside Halloween Horror Night's Stranger Things maze, as well as some behind-the-scenes insight into how Murdy and his team has brought this blockbuster TV franchise to practical life for fans.

Warning, of course. We are about to enter spoiler city. If you are like me, and an insider's look at how an attraction is made actually makes you more excited and engaged to experience it for the first time, we've got you covered here. Or, if you want to wait until you've walked through the maze to listen to Murdy, just bookmark this post and come on back next week. We will be here.

Visually, the Stranger Things maze looks to be among the most ambitious ever built for Halloween Horror Nights. These images are not yet fully decorated scenes, but you can see already the iconic locations from the show coming to life inside the soundstage, including the "alphabet wall" from the Byers' living room... 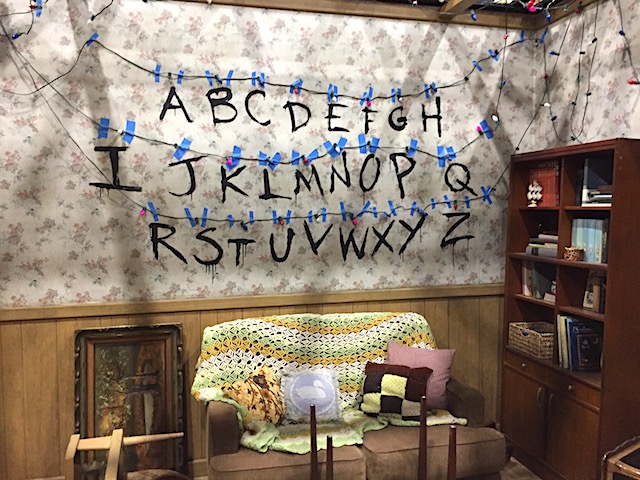 And the Gate inside the Hawkins laboratory... 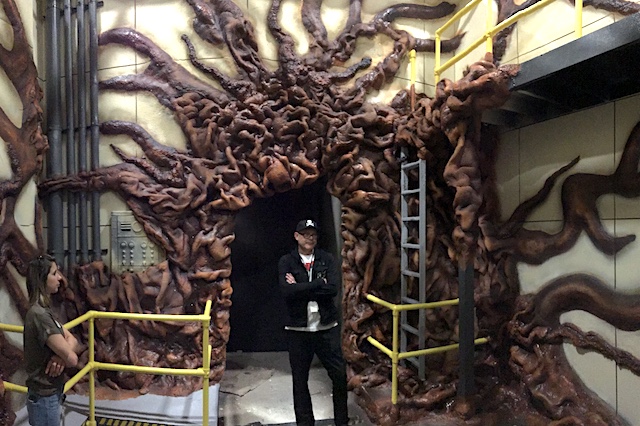 The technical highlight of the maze might be the Upside Down, the extra-dimensional "other world" from the show. (Just go binge watch it now on Netflix, if you haven't already. It's well worth your time, even if you are not a horror fan.) Murdy explains how the Universal team created a practical effect for what is a computer-animated one on screen.

But the emotional climax of the maze, as in the season one of the show, is set inside Hawkins Middle School. "Because," as Murdy said, "if there's one thing scarier than the Upside Down, it's middle school."

The narrative of the maze boils down to "You versus the Demogorgon," with familiar characters from the show encountered along the way, as the Demogorgon — and occasionally the "bad men" from the lab — chase you from scene to scene. But in the middle school, there's no more escape as Eleven and the Demogorgon face off, with you just hoping not to become collateral damage.

At the end of the tour, Murdy answers questions about the planning and production of the Stranger Things maze, as well as whether or not Universal might take on season two of the show at next year's Halloween Horror Nights.

I sometimes feel bad for the creative directors of haunted attractions. Many go to great extents to deliver mazes/houses that are highly detailed and immersive, but often sail straight over the average guests' heads. I often look for the fine details and nuance that the creative teams deliver in their productions, but am often distracted by the characters inside. I know both Universal parks provide behind the scenes tours where guests can go through the mazes devoid of actors and talk about the intricacies with knowledgeable cast members, but I wonder if there is enough interest for Universal (or other parks/events) to set aside an hour or so each night where guests can walk through without being distracted by scare actors and the screams, jumps, and running of startled guests?

russell I completey agree, I have been going to HHN in orlando since 2007 and have always just wanted to walk through and see the attention to detail without being told to move at such a fast pace