October 19, 2018, 4:47 PM · The best place to get your first look at new theme park attractions often lies within the black and white line drawings on a federal government website. That's where you will find patent applications for intriguing new ride systems, such as Disney's proposed design for a roller coaster with a moving ride vehicle.

Wait a minute, I hear many of you asking, a patent application? For that? Don't plenty of roller coasters have ride vehicles that rotate as they move along the track? Well, you're right. But with patent applications, the how matters much more than the what, and the way that Disney proposes moving its coaster seats is what this patent is all about.

Disney's application, entitled Roller Coaster With Passenger Compartment Motion Powered Through Stored Onboard Energy, submitted April 13, 2017 but just published yesterday, describes a system to power the rotation of coaster vehicles on the track. Disney's system would use energy storage units mounted under the seats that would be charged by elements along the track.

The patent application explains that some existing coasters are able to rotate due to a busbar system that allows their cars to draw power on the track. But those systems aren't effective in corners or steep sections where the cars are moving rapidly, Disney said. From Disney's patent filing:

There remains a need for a new gravity-based roller coaster design that allows a passenger compartment to be provided motion, including yaw, in addition to its travel along the [direction of travel] defined by the track. Preferably, these roller coasters would facilitate maintenance and provide the motion in any section of the track including corners and areas where vehicles are traveling at higher rates of speed while falling due to gravity (or stored potential energy being converted into kinetic energy) and where it is impractical to provide bus bar systems.

The present description addresses the above problems by providing a roller coaster (or coaster-type ride system) in which a vehicle is configured with a drive system for providing motion to a passenger compartment relative to a chassis rolling along a track. The drive system is powered through... one or more onboard storage devices such as batteries, capacitors, supercapacitors, and the like. For example, the passenger compartment may be caused to move... to the left or right from a load/unload position to cause the passengers to face show or visual display features along the ride path....

Here are a couple of those line drawing illustrations of the concept: 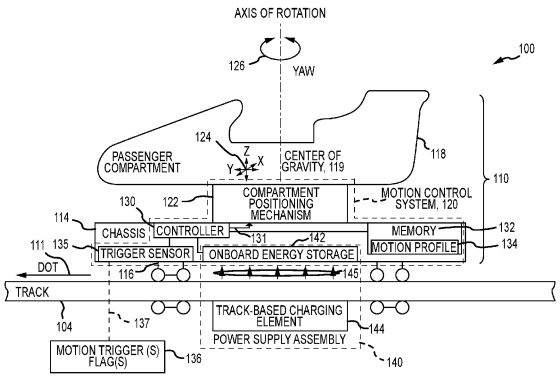 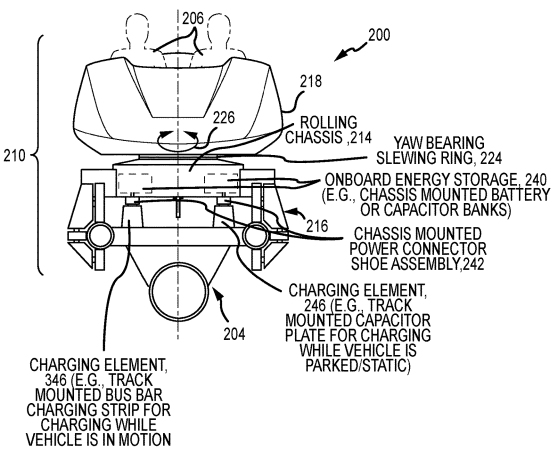 So where will see this proposed system in action? This appears to be the best fit yet for the "yaw coaster" in Epcot's upcoming Guardians of the Galaxy ride. (Better than the last patent we saw that fit the same moving ride vehicle on a track concept.) The rotating motion enabled with this system should confirm that this thrill ride will maintain a strong linear visual narrative in addition to the typical coaster thrills.

Putting the moving platform on top of the coaster track distinguishes this ride system from Universal's Harry Potter and the Escape from Gringotts, which essentially placed its motion base units under the coaster track in certain locations. If you really want to dive into the tech, take a look at Universal's patent application for the ride system on its Gringotts coaster.

Oh so that's how you guys get the scoop early! Really cool to see the technology behind the magic

This goes along perfectly with the leaked images from the Vekoma plant. I think we have our Guardians of the Galaxy system!

Will the car motion be pre-planned, in order to facilitate story along the roller coaster, or will it be free motion like a standard spinning coaster?

There could be a speed penalty from the charging system as well as adding weight to the cars. It doesn’t sound cool to me. This is all about execution if they can pull it off or it’s a dud.

Looks cool. Can't wait for some sneak peeks of the rides show elements.

I love this but why is it taking sooooooo long to build?

So it's a coaster train with built in motors and a battery with wireless charging (like most cell phones do now). Big deal. What this really means is that the cars will be able to perform precision spins without being connected to a wire or without having to take vehicles out of service to charge the batteries since they can charge on the fly. With how touchy wireless charging is, I do wonder if these will work consistently. If a train is off its mark by just a fraction of an inch, the system won't provide charge to the on-board batteries.

Another WDI breakthrough. Not a big deal ... A HUGE DEAL! GOTG at EPCOT will be every bit the gate crasher that FOP is at DAK. Meanwhile, down the street, the other guys are negotiating a bulk purchase for the material used to build screens.

What is your hotel budget for a Walt Disney World trip?

What happens now with themed entertainment in Saudi Arabia?