Is there any future for virtual reality in theme park attractions?

November 7, 2018, 10:00 AM · Virtual reality got off to a hot start a few years ago, as parks around the world - led by Six Flags - started adding virtual reality to roller coasters and drop rides. VR media breathed new life into a bunch of rides that had been languishing due to fan indifference, but their revival didn't last long. Fans hated the long waits for VR rides, as the time people needed to put on and adjust VR headsets slowed loading to a sleepy toddler's pace.

Novelty alone doesn't get you very far for very long in this business. Mediocre storytelling kept fans from endorsing VR rides as "must do" attractions worth the wait and the hassle. If VR is going to endure in the theme park business, parks and creators need to step up their game and offer something more compelling that their first attempts at implementing this technology.

Turns out, it's not just fans saying that. The parks and creators behind theme park VR believe that, too. In the latest episode of our "Building the World's Best Theme Parks" podcast, I spoke with David Schaefer from Falcon's Creative Group. As Vice President at Falcon's, David oversaw the development of Battle for Eire, the virtual reality motion simulator experience that opened this year at Busch Gardens Williamsburg in Virginia.

Unlike many other VR attractions in theme parks, Battle for Eire was designed from the ground up as an original attraction and not as an overlay onto an existing ride profile. That gave the team at Falcon's Creative Group the freedom to develop an experience that rewarded guests with a more compelling story while also avoiding some of the operational hassle that doomed previous VR installations around the industry.

David and I talked about the potential for VR in theme park attractions, and what parks and designers need to do if they want to keep fans excited about this new medium.

"Virtual reality is a great medium that can really stretch the boundaries of the theme park experience," David said. "But you don't want it to be about the technology. Instead, the technology should play a supportive role to communicate the story or the experience."

And on Battle for Eire, the VR ride experience flowed from the storytelling... literally.

"We used techniques, for example, when we were producing the media, of using the motion of the camera in the virtual CGI media production, extracting that data and loading it into the motion profile of the motion base," David said.

"It eliminated that human factor of interpretation of movement and makes it computer-accurate. Things like that really help with reducing nausea and motion sickness. It's when the visual cues of the motion are not perfectly aligned with the physical motion, that's when you start to get motion sick. If those are really tightly connected, which we were able to do in this ride, the results are that much more spectacular."

David also talked about the development of the unique headwear solution that his team created to get around some of the operational problems with getting headgear on riders. 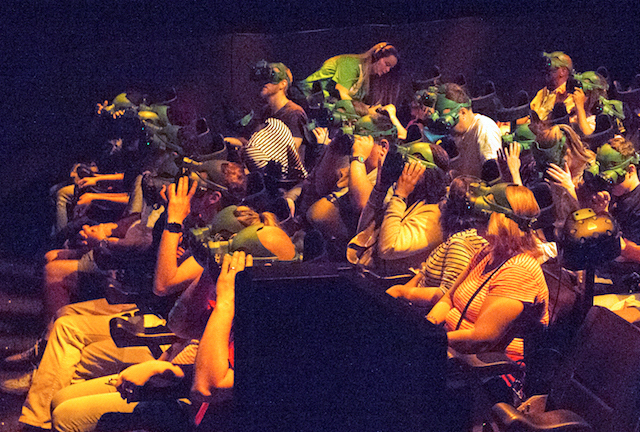 The magnetic attachment allows for instant alignment without any part of the screen unit touching the rider's face. After the show's over, you put the screen device back in its cradle and give back the headpiece as you exit, as you would the 3D glasses in a traditional theme park media show.

So why not skip the hassle of a two-piece solution and load the entire unit in the preshow, which creates an opportunity to make walking into the theater part of the VR experience? Bandwidth, David said.

"It was important [for us] to get some higher frame rate and higher resolution to improve the quality of the movie," he said. "For Battle for Eire, we used HTC VIVE headsets, which are tethered." The wired solution allowed the park to deliver the higher resolution media that everyone wanted. Plus, not putting tech into guests' hands also reduced the risk of broken and damaged VR units, too, he said.

"Of the general population, the percentage of people who have put on a VR headset is shockingly small," David said. "So when you enter an attraction like Battle for Eire at Busch Gardens we are finding that by far for the vast majority of people riding that ride, this is their first VR experience. That can present a great opportunity for theme parks. They can actually expand the potential for VR, but again it comes back to the importance of developing VR from the ground up and being purposeful.

"What we hate to see is for people to get turned off by VR because they had to wait twice as long to get on the roller coaster because of the operational challenges of VR. ...That's kind of sad for all of us if that's the case."

"What it really comes down to is having a greater connection to the experience," he said. "And that can be done in a whole bunch of different ways."

"We will find that VR will be successful when it's the right solution for the attraction, rather than being forced upon a guest."

To listen to the entire podcast episode, including our discussion on how augmented reality figures into the mix, visit our podcast page, where you can subscribe via your favorite podcast app and click to support the production of future episodes. Thanks for listening!

I don't have a crystal ball or anything, but I think that theme parks need to carefully think about how to implement VR before trying to just follow the fad for the hell of it. Kraken Unleashed at SeaWorld was awful, and I think bad implementation can turn off visitors from future projects of quality.

That having been said, much like 3d/4d experiences, I think VR is going to have a narrow window of appeal before it becomes a very commonplace technology. If VR is going to be used in a theme park, it should not be an overlay in which the load times are impacted. It should have tons of bells and whistles to distinguish it from vanilla VR (randomization, branching paths, 4d effects, tactile interactions, etc.) and/or have the experience somehow tie into a LARPing experience like Star Wars Galaxy's Edge is going to try.

The only VR I've been tempted to check out is the VOID. Again built from the ground up with a unique experience.

I think the coaster overlays can still work as a feature of an ERT/after-hours event, when the capacity is contained and people are willing to endure the hassle to experience something special. But I am ready for it to go away during normal operation.

For me, the real takeaway from this interview is its insight on how designers ought to be looking at the relationship between technology and storytelling. As fans, we love seeing the development of new tech, but it's the storytelling that allows installations to endure for a generation and beyond.

Good implementation is everything. Galactica at Alton Towers is a perfect example. Unlike VR operations on coasters I've ridden in the USA, those on Galactica are seamless. There's a separate queue for those who want the VR experience and because the VR headsets are attached to the cars by cords - unlike coasters in the USA, which require riders to pick up the headsets before boarding the train - loading and dispatch are carried out efficiently. Of course I found the VR experience on Galactica vastly inferior to the normal experience but at least it didn't compromise ride operations.

When I rode Galactica a few years ago, they hadn't yet (?) made that change, and load/dispatch was incredibly slow. THEN, when the ride was over, we were at the brake area in a very uncomfortable hanging position for about five minutes while we waited for the next car to dispatch... It was miserable. Good riddance to VR on coasters not originally designed for it. While I'm at it, I was on Battle for Eire a few months ago. Ok, nothing special.

@Jeffrey H Thank you for actually telling it like is was about Kraken Unleashed at SeaWorld Orlando. It sucked, was janky and killed operations. I predicted after riding it at the AP preview event (it was so bad) that it would be gone within a year. But the theme park blogging community gushed over how incredible of an experience it was. Sincerely made me question whether they could be objective about reviewing theme parks, or whether they were more concerned about keeping the parks happy so that they would continue to get early access to media events.

Should Warner Bros. dive back into the theme park business?

What should Universal Studios do now with Shrek?