It's already time for Christmas at Disneyland

November 10, 2018, 2:20 AM · After starting the day at Disney California Adventure for Festival of the Holidays, we moved over to Disneyland for the rest of the afternoon.

While California Adventure celebrates the diversity of modern California with its holiday event, over here at Disneyland, it might as well still be 1955. Christmas is the reason for the season at Walt's original park, where the young-'un among the park's holiday traditions — Haunted Mansion Holiday — has been running for only 17 years.

I used Maxpass to reserve Fastpass reservations for that show and It's a Small World Holiday early in the evening. But first, let's admire the 60-foot Christmas tree in Town Square, as well as the snow-draped Sleeping Beauty Castle. 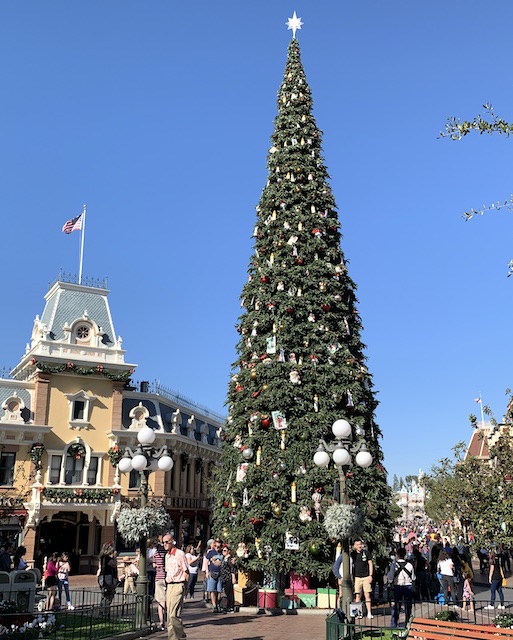 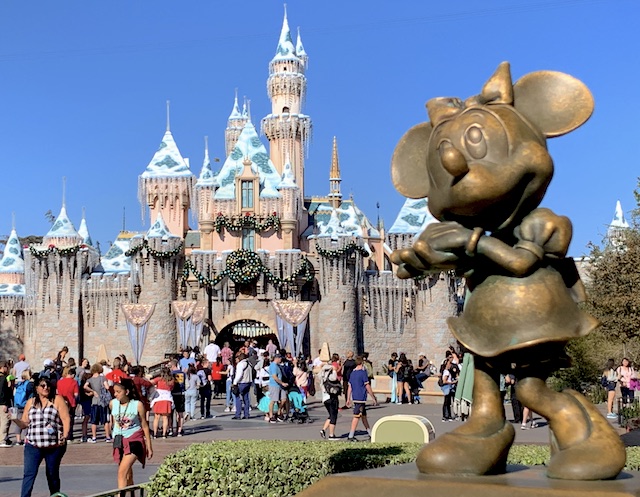 With the Friday afternoon after-work crowd descending upon the park for the 6pm showing of the 'A Christmas Fantasy' parade, I opted to watch the less-crowded 3:30 performance.

It's always a bit strange to see Mickey and Minnie leading off a parade, instead of occupying their traditional spot at the end. But this is the Christmas parade, and not even Mickey Mouse can upstage Santa Claus.

This year's new holiday obsession seemed to be the Little Green Men holiday popcorn buckets, which elicited long queues of fans, waiting to buy. But the deep supply of LGM buckets suggested that perhaps Disney is selling these with the intent that fans buy the buckets to enjoy them, instead of ginning up a scarcity to drive yet another Disney souvenir aftermarket on eBay. 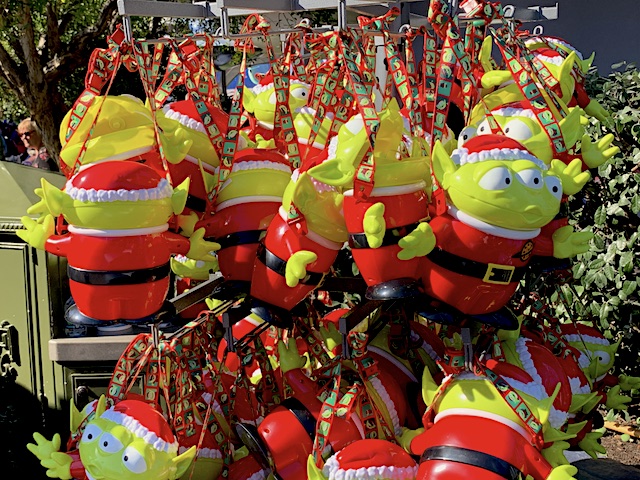 I'm not much of a popcorn fan, so after gorging on savory holiday treats at DCA, I opted for a sweet dessert at Disneyland. The S'mores Parfait ($5.99) had caught my eye in our holiday preview, so I followed the LGMs to Alien Pizza Planet to try one. 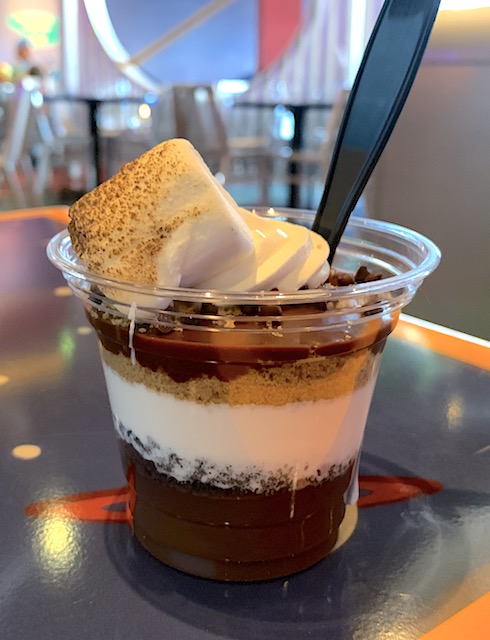 Graham crackers are my jam. Graham cracker crumbs, however, are the devil's work. Robbed of any moisture by being crushed, these crumbs taste like sawdust in the middle of the parfait. The ganache layer at the top also has solidified into what might as well have been a plastic shell. The only thing I liked in this was the chocolate pudding at the bottom, which made me wish I'd just bought a cup of chocolate pudding. Not good.

My disappointment with the parfait led me in search of another holiday-themed sweet. But nothing too fancy. Just something I could get at a cart, perhaps. Oh lord, no — not after last summer's pig-out, I couldn't... could I? Is it still to early to go back to... churros? 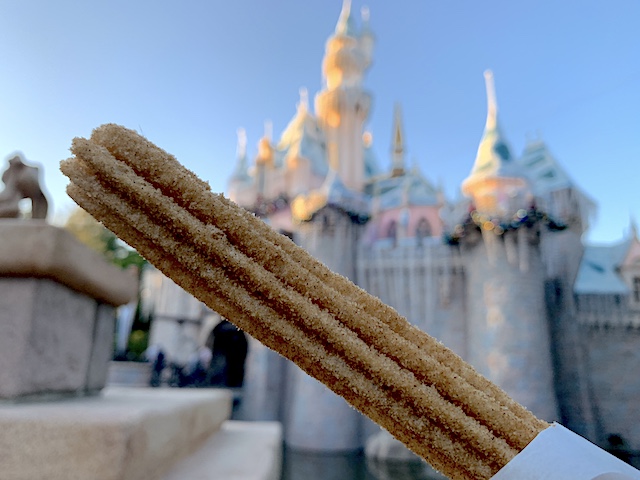 The Gingerbread churro ($5.25) nearly had me swearing off churros again, unfortunately. The trick with Disneyland's specialty churros is identifying which ones are actually unique churros and which are just regular churros rolled in a different coating. The "gingerbread" is one of those, a regular churro rolled in a coating that tasted vaguely like years-old powdered ginger and cinnamon, mixed together but tasting like neither. I was about to quit, but decided to take one last chance on the "Cowboy bark" holiday churro (also $5.25), a chocolate churro rolled in peppermint bits and pretzel crumbs. 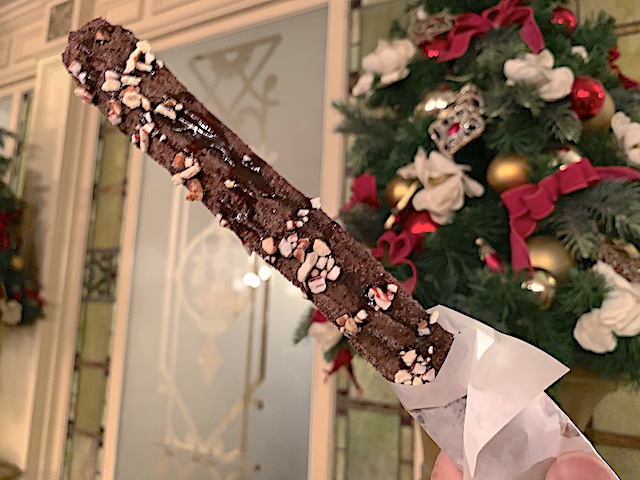 Bingo. We have a winner. The sweet and salty mix atop the chocolate churro elevated this above the traditional (and 50 cents cheaper) cinnamon option. While the extra bits only coated the top half of the churro, I enjoyed every bite of this chocolatey treat, leading me to quit while I was ahead and call it a day on the holiday food.

So let's head over to those holiday overlays, shall we? First, It's a Small World Holiday.

This show is 20-some years old now, and though Disney has kept up the inside, I really wish that they'd give it another go on the music. It kills me that this celebration of the world has all the dolls singing Christmas songs, when so many other musical traditions from around the world could get some love here — as they do on the background music tracks over at Festival of the Holidays. After hearing composer Richard Sherman talk so lovingly about this creation, I'm a big Small World fan, so I prefer the original version over the holiday overlay that, frankly, undercuts the original's power.

More successful is Haunted Mansion Holiday, which has been running since the start of the Halloween season, just after Labor Day.

A loving tribute to Tim Burton's The Nightmare Before Christmas, this overlay has Jack Skellington and crew taking over the Haunted Mansion as part of their effort to celebrate Christmas in Halloween Town. It's a delightfully silly mash-up that actually gives some narrative structure to the Mansion, which is notorious among Disney's classic dark rides for being more of an impressionistic endeavor, despite Disney's recent attempts to retcon a story into it, following Disney fans' attempts to do the same over the years.

The Holidays at Disneyland Resort continues through January 6, 2019.

Part one: Time to celebrate the holidays at Disney California Adventure

Time to celebrate the holidays at Disney California Adventure