November 13, 2018, 2:51 PM · IAAPA is known for its coaster train reveals, but dark fans weren't left out at the annual industry convention this year. Two vendors revealed details from major new dark rides that will open at parks around the world next year. 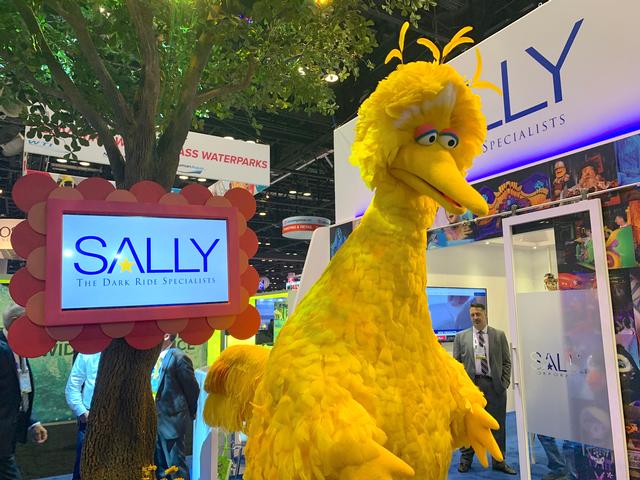 "Detective Grover will be your guide through this interactive adventure, urging guests to collect clues that will help solve a mystery happening on Sesame Street. With numerous animatronic characters, immersive scenery, and interactive gameplay, this mixed media attraction will appeal to guests of all ages," Sally said in a press release.

The 5:50 ride will include a 10-minute pre-show experience and eight projection screens, including four projection-mapped screens on dimensional sets with practical target integration, a 90-degree curved screen with animatronics and show elements, and two 180-degree screens that send riders through Count's Castle and into Oscar's trash can.

Later, Dynamic Attractions introduces its new "Duel Power Coaster" design, which it said will open in a park in Malaysia next spring. Featuring dual on-board LSM drives and a motion-platform, this coaster/dark ride hybrid is Radiator Springs Racers taken to the next level, with capabilities for drifting, inversions... and even simulated airtime. Check out the hype video:

Dynamic also announced that its Batman: Knight Flight robot-arm dark ride will open within the next month at Warner Bros. World Abu Dhabi. (Actually, Dynamic's spokesperson never said the name of the ride and the park, because they never confirm clients, but I know that this is the ride in question. It's amazing, and might be worth a return trip to the UAE!)

Get your first look at new coaster trains, from the IAAPA Expo

Dynamic Attractions continues to be the most interesting company in the theme park business. I instantly think of the Donkey Kong attraction that's been drawn up for Universal's Nintendo Land...

I would love to see Sally bring back the once beloved Knotts Berry Tales dark ride in 2020 in time for Knotts 100th anniversary. Im hoping its going to happen.

Seeing that Big Bird animatronic makes me wonder why more parks haven't utilized Muppets/Sesame Street puppets for dark rides. They have to be amongst the easiest characters to do.

Sesame Street’s theme park rights are owned by different companies throughout the world. Most of which lack the money or the interest. Disney has owned the Muppets since 2004. A new Muppet attraction would be amazing, but the Muppets have been a victim of Pixar, Marvel, Star Wars; and now Fox taking priority. Theme park potential aside, I think it might be best for the Muppets to be sold back to Jim Henson’s children, who still own and operate the Jim Henson Company, minus their most famous creations. Either that or the people who gave a big nod to the Muppets in Wreck It Ralph 2 need big promotions.

That Dynamic Attractions concept screams Mario Kart to me. I really hope it's an indicator of the sort of ride Universal has planned for that attraction. As for the Sesame Street dark ride, SeaWorld should seriously consider dropping that one in Sesame Place the next time they're due for a large investment.

The Duel Power Coaster is going to Fox World in Malaysia. And it is not the Mario Kart ride system.

My guess is Sons Of Anarchy.

Second... this would work really well for Mario Kart (whether it is the ride system for MK is irrelevant, it would work well)

Get your first look at new coaster trains, from the IAAPA Expo