November 14, 2018, 12:39 AM · While back in Orlando for the week, I could not resist playing hooky from IAAPA for one evening and heading back to my "home" park — Walt Disney World's Magic Kingdom, for Mickey's Very Merry Christmas Party.

Now, at $95-125 a night, the tickets aren't that much less than the $114-129 for a one-day ticket during the party's run. But having not just visited the Magic Kingdom more times than I can count, but also worked there for years, I was in the mood for something different than a normal evening in the park. And Mickey's Very Merry Christmas Party delivers that.

The mix-in period starts three hours before the party officially starts at 7pm, allowing you to get extra time in the park for your money. And don't forget that you can make FastPass+ reservations up to 30 days in advance on your party day with that party ticket, too. Disney does not use Fastpass+ during the party hours, but you can use it during the mix-in period.

I decided to keep with the holiday spirit by riding the one holiday attraction overlay Disneyland doesn't have anymore: Jingle Cruise. Then this happened:

Oh, boy. When the laughs start before you ever get to the dock, I swear....

Soon enough, 7pm rolled around, I joined the throngs in queuing for our free holiday treats. Seven treat locations await you around the Magic Kingdom. If you go only to one location, make it Pinocchio Village Haus, where you can get all four varieties of cookies served at the event at once: the peppermint and chocolate chip, the ginger molasses, the chocolate chip, and the snickerdoodle (presented in descending order of tastiness, according to me). Hot chocolate completes the snack. 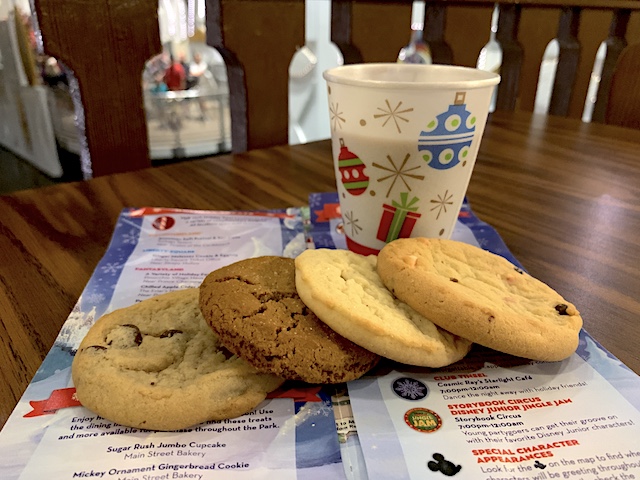 The second-most important location is Tortuga Tavern in Adventureland, which serves a Snowman-shaped soft pretzel and a sno-cone. 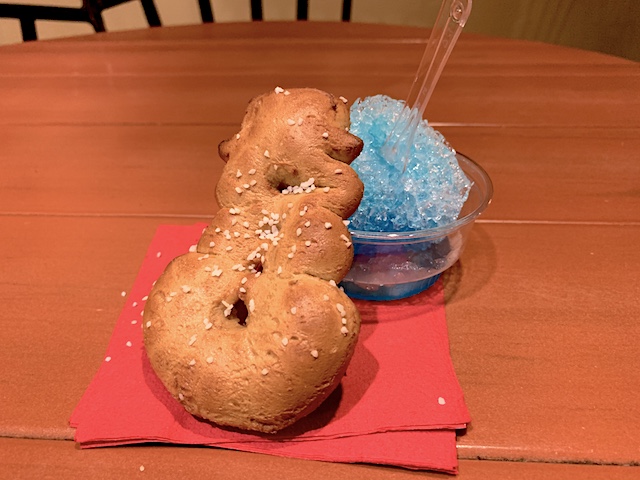 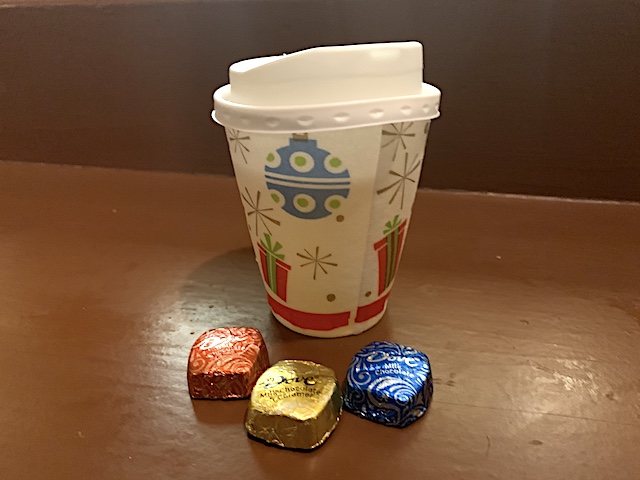 Next is the Liberty Square Ticket Office, which serves the same ginger molasses cookie, put pairs it with egg nog, which is the best drink at the party, IMHO. At this point, you've had one of each of the "free" snacks offered at the party. The other three locations are redundant: chocolate chip cookies and sno-cones at Auntie Gravity's, snickerdoodles and hot chocolate at Cosmic Ray's, and the peppermint and chocolate chip cookies at Storybook Circus Snacks.

So let's get to the entertainment. You could go on some of the "regular" attractions that remain open during the party, but I wanted to do things I couldn't during a "normal" day with my time. Four times during the party, you can watch the 20-minute "Mickey's Most Merriest Celebration" musical show on the Castle Forecourt Stage, accompanied by projection mapping on the castle.

Twice during the night, at 8:30 and 11pm, Mickey's Once Upon a Christmastime Parade winds through the west side of the park and down Main Street USA.

Finally, the Holiday Wishes fireworks show plays once at 10pm.

After the shows, if you want to hit up the treats again, the queues will be gone, the cast members will be singing carols to try to stay awake, and they will be shoving cookies at you by the handful. Load up your pack like Santa's bag of presents, then try to navigate the fleet of strollers carrying sleeping children to the parking lot at evening's end.

Or just stay until they kick you out, soaking in every last moment of Disney holiday magic.