November 29, 2018, 4:43 PM · The United States Patent & Trademark Office published five patent applications from Universal today, led by a proposal for a flume ride where the ride vehicle can point to the side as well as straight ahead.

Direction-changing vehicles on thrill rides seems to be one of the big trends in attraction design right now. At the IAAPA Attractions Expo and Destination D event in Orlando earlier this month, Disney Parks chairman Bob Chapek made a big deal of how the roller coaster cars on Epcot's new Guardians of the Galaxy ride will be able to turn to face in multiple directions. Chapek called the ride a "story-telling coaster."

Disney's found a fresh way to do that, but the general effect will be familiar to anyone who's ridden Universal's Harry Potter and the Escape from Gringotts, which uses a combination of motion base and roller coaster technology to create an experience where cars can pivot like a dark ride and also glide like a coaster.

At some point, it was inevitable that a theme park company was going to try to apply this to flume or boat rides. And that's what Universal proposes in its application, System and Method for Kinetic Rotation of a Ride Vehicle, published today and filed in May 2017.

Shanghai Disneyland's Pirates ride pivots, but it uses underwater tracks rather than simply flumes to direct its boats (*updated), so Universal's is a different approach. Universal's proposal does not rely on expensive motion bases or other mechanical contraptions to rotate the flume ride vehicles. Instead, it takes a simpler approach, using objects positioned within the flume to turn the vehicle. It's similar to how obstacles along a course can help rotate the rafts on a river rapids attraction, except more controlled and for traditional, forward-facing "boat ride" vehicles. 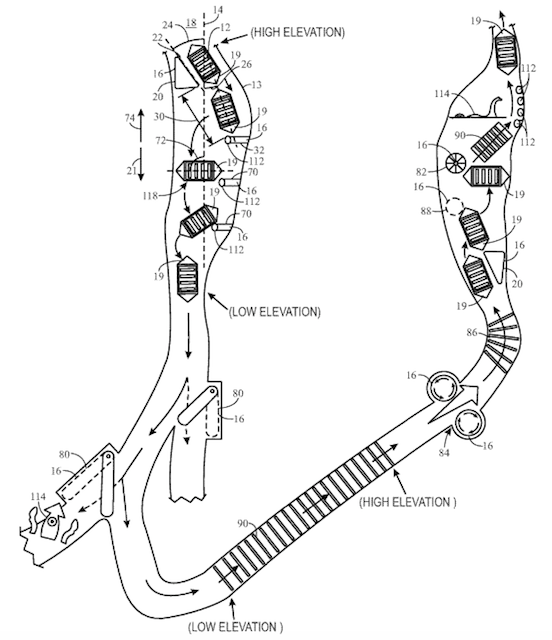 Universal also applied for a patent for a Variable Vehicle Ride Switch, again with the ability to change a ride vehicle's direction mid-course.

Other patent applications included System and Method for Tracking Vehicles in Parking Structures, a Tracking System and Method for Use in Surveying Amusement Park Equipment, and Systems for Ride Vehicle Restraint, which describes lap bar and restraint systems that could "simultaneously accommodate guests of a wide spectrum of shapes and sizes."

Okay, aspiring and amateur designers playing at home... what would you do with this proposed tech in the parks?

How does Disney rotate their boats in the latest version of POTC? I like this unversal method better, because it still leaves the possibility open for drops.

Here's our story on the Shanghai Pirates ride system — it's basically an Omnimover on water.

Boy - the development of a restraint system that would accommodate a larger assortment of sizes would be fantastic. Having been on both sides of the equation, I can tell you it's no fun for either the staff member or the person trying to ride when they learn they don't fit. I wonder if this would be something for new build attractions, or if it can be retrofitted into existing rides?

Little dinsosaur or Loch Ness monster suggests Jurassic World. A couple other possibilities could be Jaws 3.0 or a bit of a stretch, Fantastic Beasts Family flume?

I was disappointed in hearing that Calvin and Hobbes wasn’t going to be made in Toon Lagoon. I would have loved to see an interactive water ride either splash battle or boat ride with water guns where it’s you versus killer deranged snow goons. Oh well, missed opportunity I suppose.

The former Typhoon Sea Coaster (changed to Skull Mountain) at Six Flags America was an Intamin log flume style attraction that used turntables to change the direction of boats during the course. The turntables were not used to direct boats towards show elements, instead they allowed for a smaller footprint for the ride by allowing the course to incorporate tight turns (all at the top or bottom of lift hills) to maximize the area where the ride was placed. Ultimately, I think the turntables became unreliable, and are probably the reason the attraction was ultimately scrapped (what used to be a 270-degree turn at the top of the final drop became a 90-degree turn with an occasional push from a ride op near the end of its life), but seemed like an effective system.

Obviously Universal's patent is a bit more low tech with fewer moving parts, but considering how unpredictable and random rapid rides can be, it's going to be interesting to see how Universal is able to ensure that logs navigate a consistent course over a specific amount of time to allow for the narrative of the ride to play out. For those that don't know, parks can control how much splash is generated on flume and rapid rides (yes, it can sometimes be affected by the mass and weight distribution of the vehicle) by raising and lowering the amount of water in the attraction (higher water=more splash and vice versa), so it's possible that they may lose that important control to be able to facilitate these intricate boat movements in other parts of the course, or perhaps these areas would have to be isolated from the reservoir of the splashdown area. It's a clever system, but I do wonder if they will be able to achieve the consistency necessary to actually tell a story over the course of a flume ride.

I'm intrigued with the multi path structures.
Maybe one boat could overtake an other boat or maybe you can vote to go one way or the other changing the story.

Pinball machines have used this system for years :-)

Let's share tips for visiting Disney in the rain and cold