December 11, 2018, 4:52 PM · Disney has filed a patent application for a new theater special effects system based on the classic Pepper's Ghost effect.

Commonly (and somewhat mistakenly) known these days as "holograms," a Pepper's Ghost is a 19th century stage trick that uses glass or another reflective surface to make a person standing off stage appear directly in front of the audience. Because the audience is seeing a reflection, rather than the actual actor, the appearance looks somewhat "ghostly," leading to the effect's name.

(The "Pepper," by the way, refers to British scientist John Henry Pepper, who is credited with popularizing the effect back in 1862. This is truly old school stuff.)

You can see Pepper's Ghost in action in attractions such as Mystery Lodge at Knott's Berry Farm.

The problem with Pepper's Ghost in the 21st century is that, sometime, you don't want your illusion to look like a ghost. The nature of bouncing light waves dictates that whatever light source is illuminating the offstage figure must be coming from his or her side, otherwise, the audience would not have a clear view of the actor's reflection on stage. That relatively weak lighting often stands out strangely next to the brighter elements on the visible stage.

Disney's patent application seeks to address that problem by using infrared lights, cameras, black retroreflective material, and "hot mirrors" to create a system that allows for brighter lighting of the offstage actors, without creating light leaks of anything around them that might spoil the illusion. The application also describes a combination of live actors, off stage and on, with recorded media to create a more visually convincing multimedia production where actors and appear and disappear on a traditional theater stage.

[T]he new display techniques and display systems configured to implement these techniques would provide a live cinematic performance for viewers or an audience with better illuminated and balance images and would allow a live performer to appear to interact with other virtual performers (e.g., with objects/performers in a hidden room that are projected into the space/stage where the live performer is located) and projected media and with still or moving physical set elements.

Here's a diagram, from the patent application: 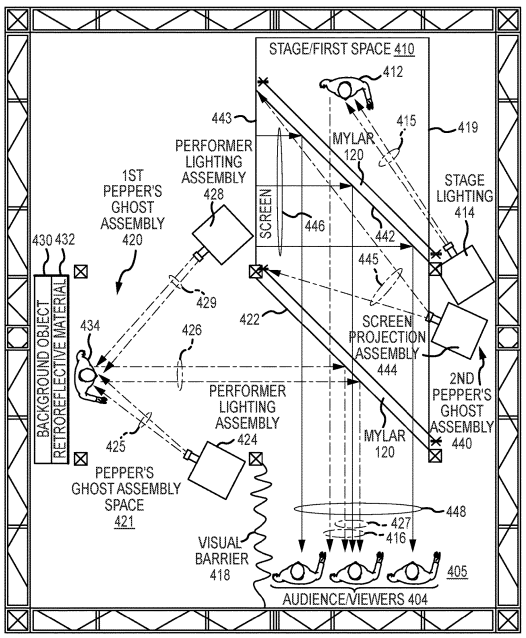 And part of the nitty-gritty description of Disney's proposed system:

The light source, such as a high speed projector, is operated to project visible light (e.g., white or colored light) onto the non-background surfaces or onto the foreground or selected objects and/or performers. The light sources (e.g., left and right front projectors) provide frontal illumination of the foreground or selected objects and/or performers, and light is projected out of the Pepper's ghost assembly or second space into the first space where it strikes and is reflected from a beamsplitter (or half-mirrored surface that may be a surface on a pane of glass, a planar sheet of plastic (such as Mylar), or other transparent material) and reflected outward to the audience/viewers for viewing concurrently with illuminated objects/performers/surfaces in the first space. During use of the Pepper's ghost assembly, all the surfaces covered with the retroreflective material appear black (or not readily visible) to the audience/viewer (not lit up) while the selected objects and performers in the second space (or "hidden room") are visible or illuminated (lit up). The brightness of the displayed/projected "Pepper's ghost" can be chosen to match that of the objects and performers in the first space such that they appear to be physically present in the first space or to be less ghostly than was the case with prior Pepper's ghost technologies (unless a lower brightness is desired for a particular effect or display).

How would you like to see Disney use this new system in its theme parks? (My guess: This sounds perfect for Doctor Strange opening a portal, live on stage.)

All around the world, the Pepper's ghost effect is used in 2 variants.
At least, since last quart of 20th century.
First, the original, is the 'ghost' being a physical object which appears when the lighting levels change. (Beam on the object, and it appears through the reflecting plane)
Second is the variant where a video projection is beamed in the reflecing plane, making the need for the physical set obsolete.
Wether or not you combine both techniques in ONE set, is not an invention... it's an application.
One can "file" as many patents which represent no more then applications of existing stuff, as he want, there is no reason to grant the patent !
I believe, the far majority of actual Disney patent-filings, just serve the lottery game. Perhaps ONE out of 50 gets granted in the end ?
In the meanwhile, many people think Disney 'owns' all these patent rights... nothing is less true !
...
By the way, Efteling is actually building a new fairy tale show ('The six swans', Grimm) where the different techniques will be combined in one scene. No future guesses, actually in building stage. For them, no fear from whatever Disney is "filing", everbody can and is allowed to combine all existing techniques in whatever possible forms.