January 9, 2019, 10:34 PM · Hersheypark today celebrated the groundbreaking for its Hershey's Chocolatetown expansion, which will open in 2020.

The new entrance to the Pennsylvania theme park will include the park's 15th roller coaster — billed as Hersheypark's longest, tallest, and fastest — as well as a new icon for the park, the Kisses Fountain.

Officials from the theme park, Hershey Company, and local government joined a few tasty friends for the ceremony this morning, in front of the Hershey's Chocolatetown construction site. 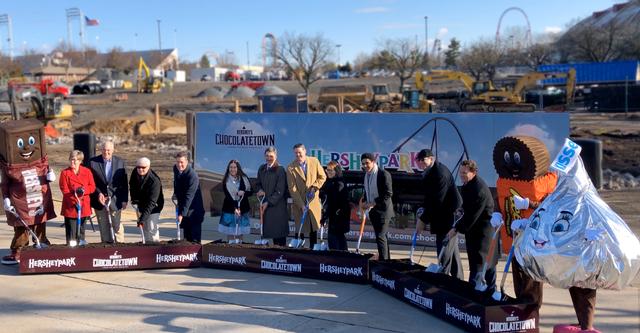 "We are incredibly excited to officially break ground and enter this next chapter in the rich history of Hersheypark," Hershey Entertainment & Resorts President and CEO John Lawn said. "Hersheypark will be open and fully operational during 2019 as Chocolatetown comes to life for the summer of 2020."

The park is spending $150 million on the 23-acre expansion, which includes new dining and retail and represents the largest single capital investment in the history of Hershey Entertainment & Resorts. 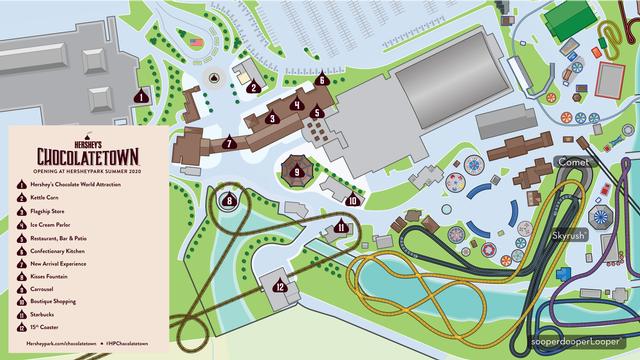 Even though the new expansion won't be ready until next year, Hersheypark isn't taking this year off from improvements. For 2019, the park is retheming its Reese's Xtreme Cup Challenge interactive dark ride into Reese's Cupfusion, where riders will battle the "League of Misfit Candy."

I really want to believe that the "dirt" in those troughs is just ground-up chocolate bars.

"I really want to believe that the "dirt" in those troughs is just ground-up chocolate bars. "

I'd rather eat dirt than Hershey's chocolate.

It's a shame they are demolishing the Bavarian-style buildings.

How can you have a groundbreaking without at least revealing the name for the new coaster? I know it's 2 years off, but a groundbreaking ceremony like this should offer some additional details of what's to come beyond what has already been released.

I'm excited for this expansion. I take my high school physics classes there every year. I hope the roller coaster is a smoother ride than skyrush. That one is so uncomfortable on the turns.