Disney details a new look and a new pavilion for Epcot

February 21, 2019, 11:35 AM · We've gotten our first look at the reimagined entrance to Walt Disney World's Epcot, as well as news of a new pavilion coming to the park's Future World.

Disney this morning released fresh concept art for the Epcot entry plaza, in which the much-maligned "Leave a Legacy" photo sculptures will be removed. 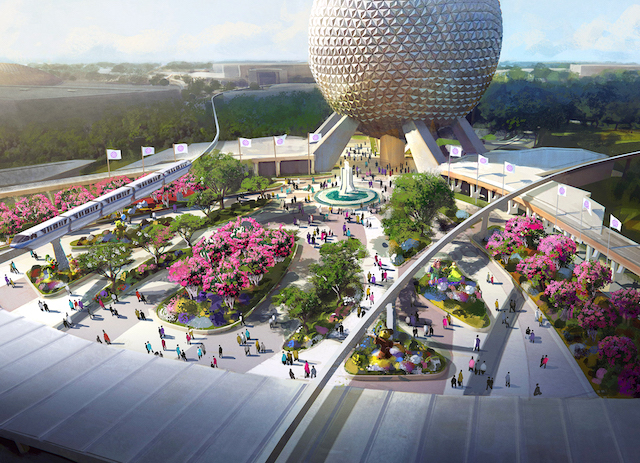 The concept art emphasizes greenery over the cold, rock-like slabs that now dominate the entrance to the park. It looks like Epcot is getting an infusion of Disneyland's pink-blossomed Tabebuia trees, as well as a new fountain design that calls back to the park's original entry fountain. There's a mass of trees behind Spaceship Earth, as well, but Disney tends to use Bob Ross-like tree "smudges" to obscure stuff around the periphery of its concept art, so I wouldn't take it as a given that the area behind Spaceship Earth will become some sort of forest. Disney says that "more details about the transformation of this area will be announced at a later date."

The Leave a Legacy pictures will "move into a beautiful setting just outside the park’s gateway," Disney said, providing no additional detail on where that will be.

In addition, Disney announced that the park's former Wonders of Life pavilion will become a new, as-yet-unnamed pavilion "devoted to playful fun." 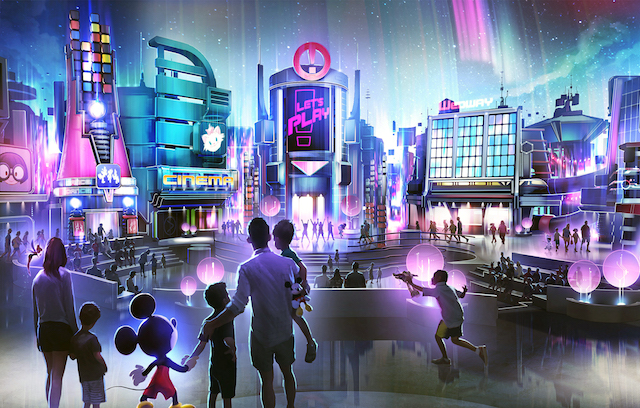 The concept art looks straight out of Ralph Breaks the Internet, in a pop-futuristic style that both evokes and explicitly includes Disney branding. (Check out the building just to left of center, with the Aristocats Marie icon and the unmistakable "D" shape.)

"This innovative, new pavilion is beyond anything we’ve ever created and is completely unique to Epcot," Walt Disney Imagineering portfolio executive Zach Riddley said in a release from Disney. "Built on the power of play, it introduces an immersive and interactive 'city' where you can explore, create and interact with some of your favorite Disney characters. This is an experience worthy of our bold vision for Epcot – and another signature element of our transformation."

The new pavilion will open in time for Walt Disney World's 50th anniversary, which comes on October 1, 2021.

If you want an in-person look at the plans for Epcot's upcoming changes, Disney is opening a Blue Sky Cellar-like Experience Center in the Odyssey building later this year. In addition to the new entry and the play pavilion, Disney is building a Guardians of the Galaxy roller coaster in the former Universe of Energy pavilion, adding the Remy's Ratatouille Adventure trackless dark ride in the France pavilion, replacing IllumiNations with Epcot Forever and then an all-night nighttime show in 2020, adding table service restaurants in Japan and next to Mission: Space, updating the films in the China and Canada pavilions, and adding a Beauty and the Beast sing-along to run in rotation with the Impressions de France movie.

Specific opening dates are yet to come for all, but Epcot's 40th anniversary in 2022 appears to be the target to wrap these projects, with several — including the Guardians coaster — opening in time for the WDW 50th.

"Built on the power of play, it introduces an immersive and interactive 'city' where you can explore, create and interact with some of your favorite Disney characters. This is an experience worthy of our bold vision for Epcot – and another signature element of our transformation."

I thought WDW gave up on DisneyQuest.

First, I had a picture on Leave a Legacy so a tad annoyed losing it but the new entrance looks much better.

Second, glad to see the former Wonders pavilion used again but it looks more like a fancier version of Innoventions. Hopefully they have some sort of simulator attraction and still possibility of more changes so we'll see how it works out.

My impression of the Play Pavillion is that they're trying to create a new attraction for younger children and a flexible way for them add synergy and promote new properties. I wouldn't be surprised to see meet and greets go to that space.

So exciting to see Wonders of Life back in the game! And, even if it's just for a preview center, going back into the Odyssey building will bring back great memories. I hope that the new plans that they have yet to unveil include some drastic changes for Innovations. What a waste of space! I hope it's not just character meet and greets either. This new play zone looks great and feels very Epcot, while still injecting the obligatory characters into it. I like it! Funny how this was released the same day Universal unveiled their Potter coaster!

I get the sense they're going to do something pretty major with the central hub/Communicore space, which probably involves completely tearing those buildings down. They still need the counter service restaurant, the major gift shop, and the Starbucks, but just about everything else can come down without much of an issue, and those three spaces could easily find new or redesigned homes. It will come down to budget, of course.

This is great news, and interests me far more than the new Potter ride at IOA. EPCOT has always had that bland feeling when approaching the entrance, and the face lift is well overdue.

Lots going on inside the park as well, with the Guardians ride building beginning to take shape.

Russell .... Disney Quest was antiquated and had seen out it's usefulness. This new pavilion could have been the reasoning behind the closure of DQ and the potential for a new state-of-the-art, VR and/or simulation indoor facility would fit well into that area of EPCOT.

I like the reimagined entrance & the fountain. And the Play Pavilion looks cool....It is funny how Mickey is just apart of that one family, haha.

The Play Pavilion seems like it has a lot of overlap with the Imagination Pavilion concept. Reserving judgement for now but concerned.

Great improvement on the entrance plaza (FLAGS!) and love the throwback EPCOT Center fountain. I wish they would bring back the 30-ft palms that used to flank either side of Spaceship Earth as well, it felt very “Floridian” when they were there. EPCOT and Disney horticulture do very well together and I’m glad Disney is expanding on this. EPCOT IS GETTING SOME LOVE!

Introducing more trees is NEVER a bad idea. I love it!
I'll miss NSYNC's photos on the Leave a Legacy tombstone, though.