March 28, 2019, 5:02 AM · With the Star Wars: Galaxy's Edge expansion about to claim Disneyland's last remaining designated smoking area, the Disneyland Resort has announced that it will go smoke-free on May 1.

Starting that date, any Disneyland visitor wishing to smoke or vape will have to leave the security area, which includes the Disneyland and Disney California Adventure theme parks as well as the Downtown Disney shopping and dining district. (Update: The smoking ban extends to Walt Disney World theme parks and Disney Springs as well.)

A smoking ban is not the only new restriction coming to the parks, as Disneyland prepares for the opening of its new Star Wars land on May 31.

Also starting May 1, Disneyland will ban oversized strollers inside its theme parks. It also will begin strictly enforcing its current (but pretty much ignored) ban on wagons inside Disneyland and Disney California Adventure. Strollers may be no wider than 31 inches, starting May 1. That's a reduction from the current 36-inch limit. The new stroller restrictions and wagon enforcement will go into effect at the Walt Disney World theme parks on the same day, as well.

(All of this information was provided to Theme Park Insider by senior Disneyland officials in a private presentation to five news outlets last week. The information was given under embargo until 3am PT today.)

To encourage visitors who want double strollers to use narrower units, Disneyland soon will begin renting double strollers. These will be tandem models, where the two children sit one behind the other rather than side-by-side. 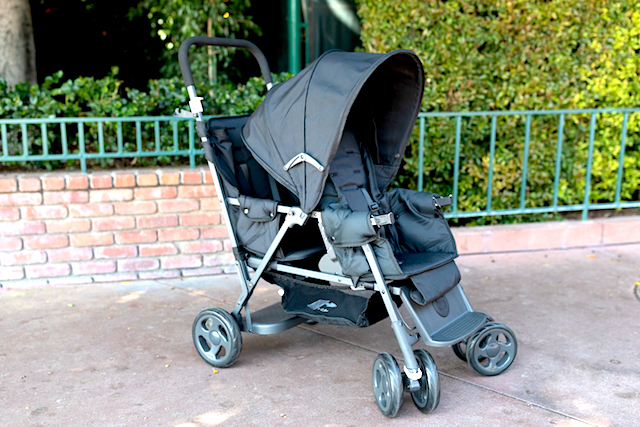 Disneyland has had an official ban on pulled wagons inside the park for years. But it's been lax about enforcing that ban, as it has allowed wagons that could be pushed like a stroller so long as adults pushed them through the front gate. Now Disney is closing that loophole by banning wagons inside the parks entirely, including popular Mac Sports and Siena models.

Disney officials hope that the new restrictions will help to clear often-crowded pathways inside Disneyland and California Adventure, especially around older building entrances in the original park, which were not designed to accommodate extra-wide strollers. The elimination of the last remaining smoking areas also should free up space within the parks, too.

Finally, Disney also announced that it is banning visitors from bringing ice or dry ice into the parks. Visitors who want to bring in coolers or backpacks with cold items should use a reusable ice pack, instead. However, Disney quick-service dining locations will continue to provide ice to guests upon requests, should you need to keep stuff cold after your ice pack loses its cool.

Follow the links below for more of today's "Project Stardust" news from the Disneyland Resort.

Disneyland will use a virtual queue for Galaxy's Edge

Policies that have been a long time coming - now if they can only transplant them to WDW, particularly the wagon ban. However, I do feel empathy for smokers/vapers (even though I find them to be disgusting and annoying habits). Having to completely leave the security of the parks is going to be a HUGE issue for guests, and I anticipate lots of people trying to grab a drag anywhere they can (especially those that vape, seeing as they are already notorious for creating clouds of fog anywhere they please already). Establishing a policy is one thing, but enforcing it is another. Will getting caught vaping be cause for dismissal from the park, or just result in a verbal warning? The stroller/wagon ban is easy to enforce because you can simply not allow them through the gate, but e-cigs are not contraband, so it's not like they can be confiscated prior to entry. With proliferation of vaping, I think Disney would have been better served creating designated smoking areas instead of completely eliminating it in the park, because I predict that this new prohibition will create more problems than it solves.

These bans actually affect WDW as well. The parks published an infographic that's being posted in the mom groups, upsetting those who have rented or purchased the Keenz stroller wagons for their upcoming trips. Keenz released a statement earlier this week reassuring moms (and the companies that have been renting their stroller wagons) that they would still be allowed in the parks; however, that doesn't seem to be the case anymore. That said, I'm glad I've been planning to use my Joovy Caboose sit-and-stand stroller, which is what it looks like Disney will start renting.

Note to Mr. Iger: Require an up-charge to enter the designated smoking area.

Seriously though, I concur with RM. Some of the strollers you see in the MK may as well be RVs. As for smoking, Disney should still designate areas for smokers.

I do a lot of work in Scotland's biggest prison (HMP Barlinnie). We went fully smoke free in November, other than one time use Vapes that that the boys can buy, they have the strength of 20 cigs, and cost £2 (Bear in mind a convicted prisoner can expect a "cell wage" of £7 a day, and remand/untried prisoners have nothing except what friends and families pay in (they can sometimes get a whole 90p by doing an educational class).

After their hidden caches of tobacco ran out, there was an upswing in fights.

What's my point? At a place like a MK park running from early hours until o-dark-thirty, I'm not convinced making someone go that far away to satisfy a craving is a smart idea.

I think TH has it right. Designate a smoking space and charge admission to discourage use. If people will pay stupid money for a selfie with a minnie mouse cutout, they'll pay for this.

Florida version of the smoking ban is different in that there will be designated smoking areas at "entrances' to Disney Springs and at the on-site reaort hotels. No word on the backstage cast smoking areas on WDW property, which could lead to a major union grievance since there are thousands of smokers with seniority (including among leaders & management) thay will certainly grieve if not given a designated smoking area backstage. Laws are very different in Florida as is the make up of guests since a large percentage of international guests at WDW smoke.

Smoking areas should still be a part of the parks, though they should be located far away from main pathways, unlike smoking areas right underneath the PeopleMover track in Magic Kingdom so that everyone riding gets a nose full of cigarette smoke, or on Big Thunder Trail at Disneyland where there isn't enough room for non-smokers to give the lingering cloud a wide berth.

I know there will be those with no sympathy for smokers, and I get it, but this could very well make for an unpleasant experience for non-smokers, as well. I think, once smoking areas are gone, there will be a huge uptick in people either trying to "sneak" some puffs or just outright ignoring the rule and openly smoking wherever, since there is no place in the park to have a "legal" drag anyway.

Related topic, Tokyo Disney Resort has the best designated smoking areas industry wide, and considering the relatively high percentage of smokers in Japan, no surprise. Especially Tokyo DisneySea, where they are like cul de sacs and well marked and out of the way of non smokers while comvenient to smoking guests. At least this dictate from Burbank comes with timely warning- unlike when corporate banned smoking guestrooms at the on-site resorts on both coasts and left Florida's cast and management with many rightfully angry resort guests that had checked in to designated smoking rooms and were suddenly faced with a ban out of the blue. The backstage smoking areas were extra full of disgruntled Mice who were tasked with dealing with this. Honestly there is no decent reason to apply this to Walt Disney World Resort where there are already too few designated smoking areas on-stage at the theme parks and no crowd control excuses to be made for Star Wars Galaxys Edge involved. We already have guests lighting up more than ever at the Cast backstage entrances. What's considered socially acceptable and politically correct in California is very different than what is expected in Florida and for what Disney charges frankly Scrooge McDuck should be lighting smokes for guests instead. Expect guests to light up randomly and play dumb from May 1st....

Just put a designated smoking area in the Esplanade between the parks. The parks are small enough to leave and reenter relatively easily. Pretty stupid move by Disney.

This definitely needed to happen. A family completely blocked off a section with 3 enormous strollers and it blocked the views of many when I last went to watch the World of Color