There's plenty for even grown-ups to enjoy at Legoland Florida

March 31, 2019, 11:07 PM · Before the press events kicked off for the grand opening of The Lego Movie World last week, I took some time to wander around Legoland Florida — a park I hadn't visited before.

Well, not as Legoland Florida. When I was a kid, I'd visited the park's predecessor, Cypress Gardens. Along with Silver Springs, Weeki Wachee, and Sunken Gardens, Cypress Gardens was one of Central Florida's legendary roadside attractions. Unfortunately, the roads they stood beside turned not to be important ones, not once Interstates 4 and 75 pulled all the snowbirds away.

Like a real-life Radiator Springs, Cypress Gardens lost the attention of many Florida visitors. For a while, it was part of the SeaWorld/Busch Gardens family, which helped boost attendance as the park become a "throw in" on SeaWorld Orlando and Busch Gardens Tampa annual passes. (And APs for the late Circus World/Boardwalk and Baseball, too.) But SeaWorld parent Anheuser-Busch sold the park and by 2003, it was closed.

A new owner the next year installed a slew of amusement rides, but the park closed again by 2009. Fortunately, Legoland owner Merlin Entertainments stepped in, and the park reopened as Legoland Florida in 2011.

And in 2014, Legoland reopened the botanical gardens that started it all, Cypress Gardens. 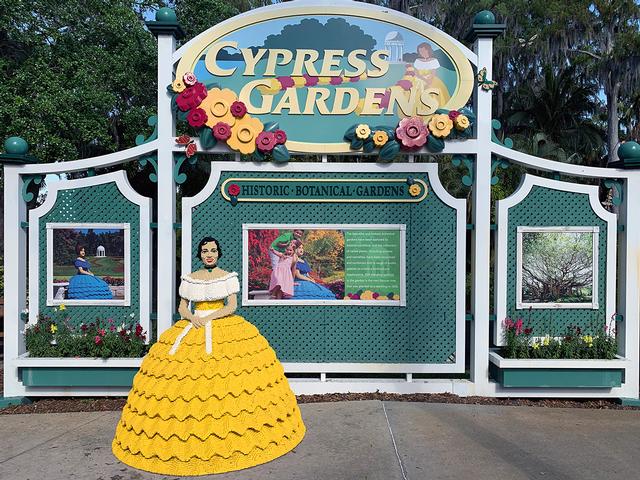 The southern belles returned, now in Lego form, but the real attraction remains the gardens themselves, beckoning you to explore the pathways. This is not like any other Legoland theme park. 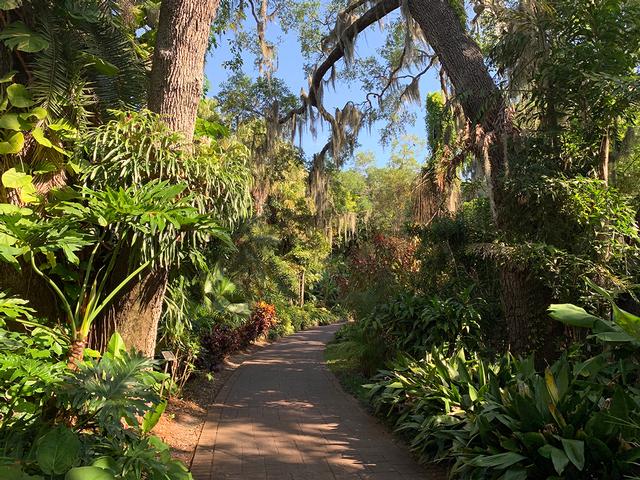 Flowers lead the way down to Lake Eloise, upon whose shores Cypress Gardens was built. 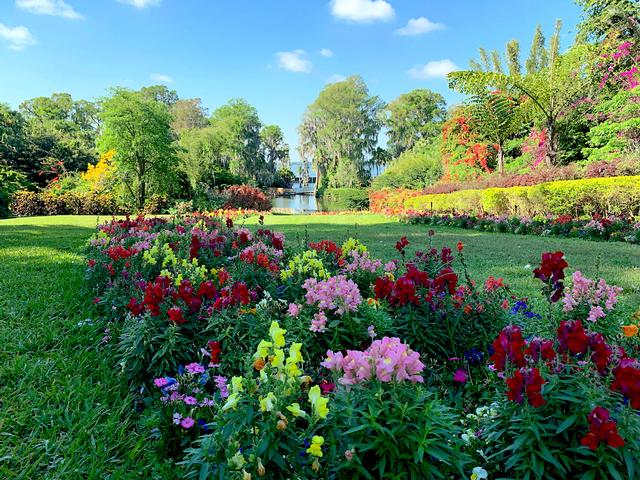 The most photographed spot in the gardens might be its gazebo, with its southern belle sitting out front. 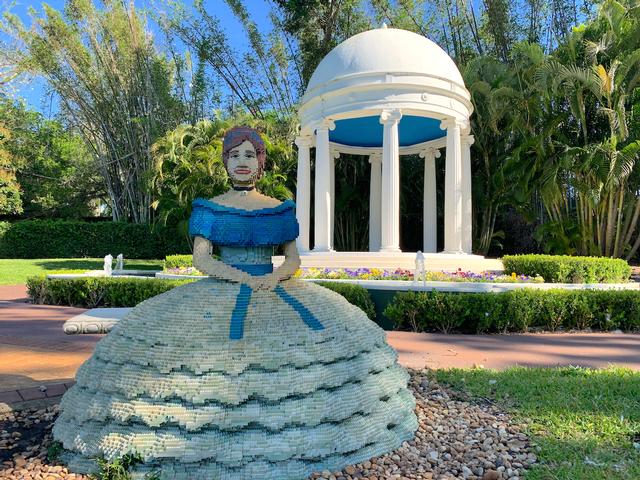 It can take a conscious effort to get lost enough to find the Oriental gardens in the back, but do not be deterred. 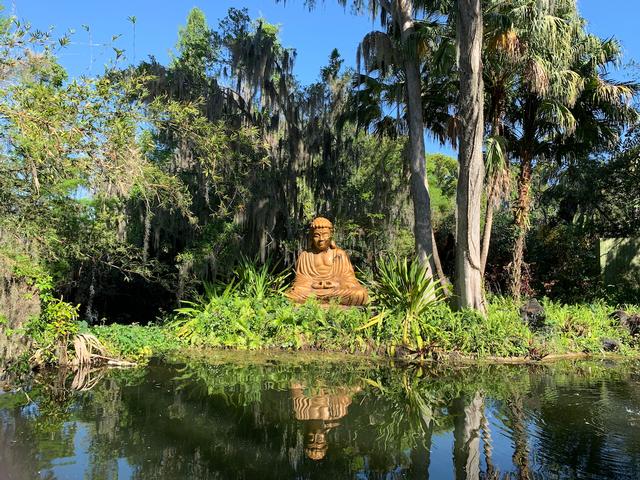 Nearby is the gardens' "Florida Pool," built for an Esther Williams movie. Yes, it's the shape of the state of Florida, thought that is best seen from the lake... or the air. 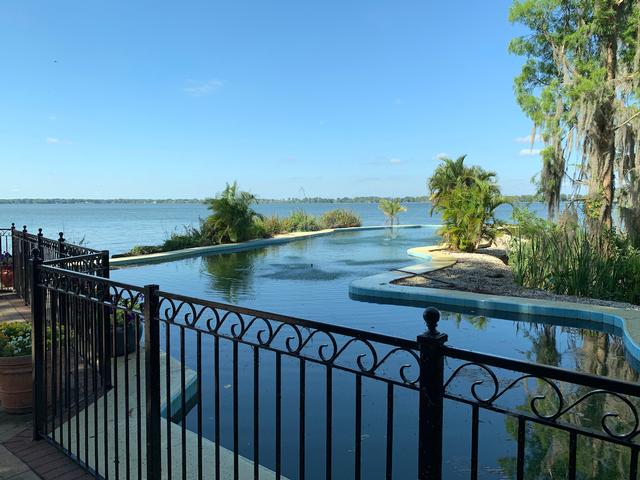 High water on Lake Eloise closed a few pathways on my visit, but there remains more then enough sights to delight on a walking tour of Cypress Gardens. 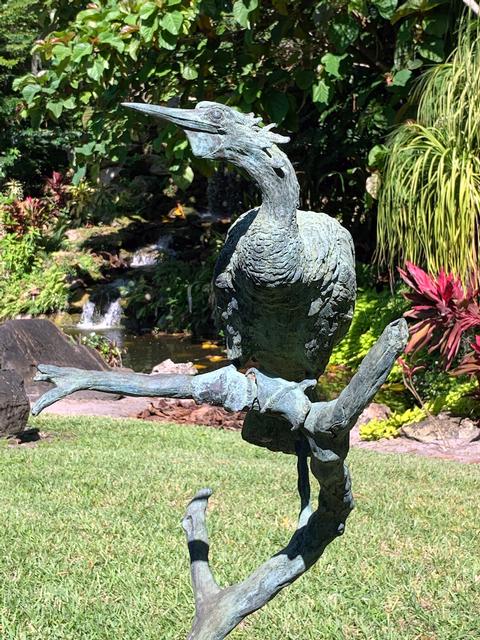 Of course, the walking tour most associate with any Legoland theme park is its Miniland, and the Florida park does not disappoint, offering some unique Florida sights, including the Kennedy Space Center... 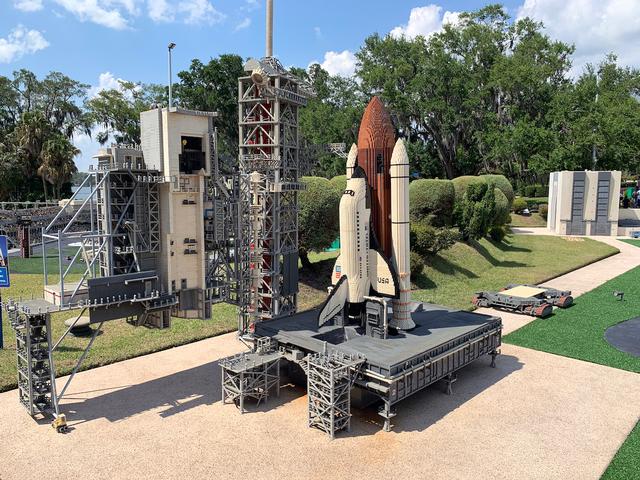 ...and the Daytona Speedway. 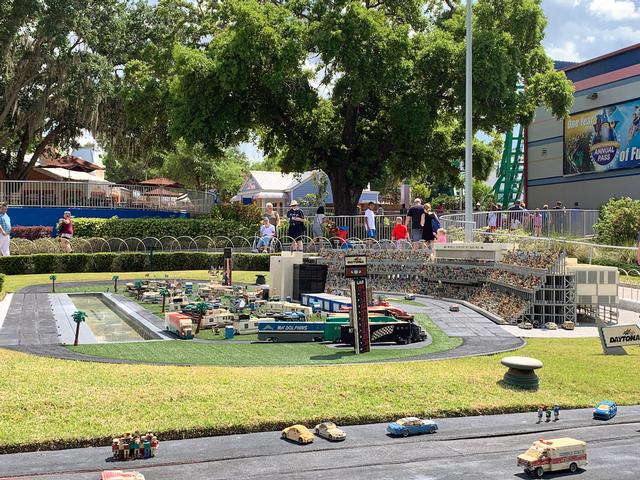 But I didn't want to just walk around this park. I wanted to go on some rides! But with no child accompanying me to check out the kid-focused attractions, and deadlines looming for The Lego Movie World, I opted to skip the interactive rides that I knew from Legoland California close to my home: Lost Kingdom Adventure and Ninjago The Ride. So that left the coasters.

I could not resist a ride on Legoland's classic The Dragon, which I always enjoy in California. The Legoland version uses the Vekoma Junior Coaster track originally installed at Cypress Gardens as Okeechobee Rampage in 2004, but it's the same delightful experience as I know from California. 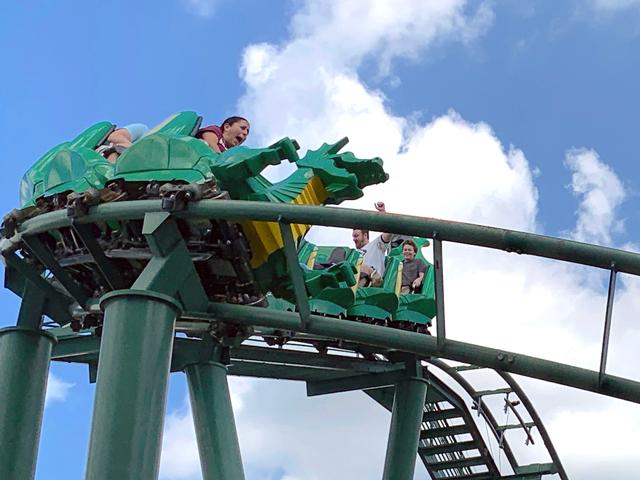 But Legoland Florida's Coastersaurus is worlds better than its west-coast counterpart. Originally "Triple Hurricane," named for the three storms that delayed the park's reopening in 2004, this Great Coasters International wooden junior coaster delights throughout its 1,365-foot run. 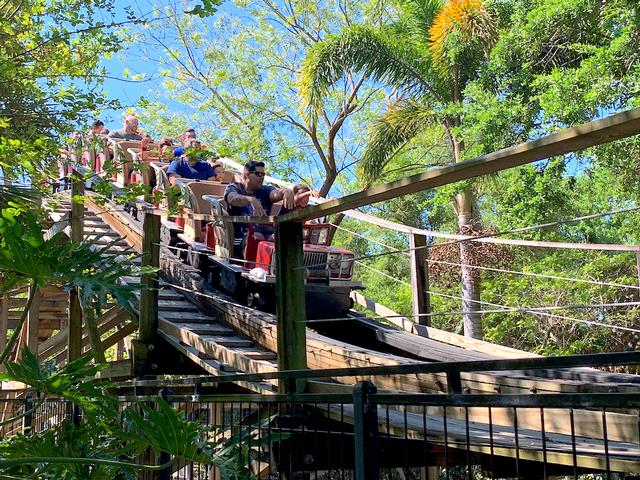 But the first coaster I rode here was Flying School, a Vekoma Suspended Family Coaster. Typically, I avoid inverts, but since I had such a good time on Fast and Furry-ous at Warner Bros. World Abu Dhabi last summer, I figured I would give this one a try. 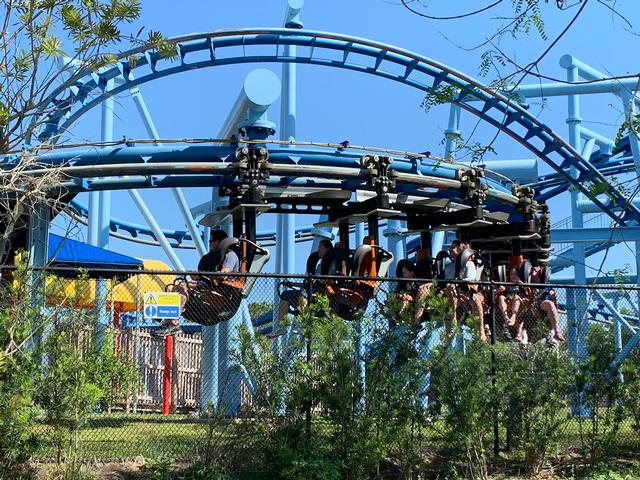 Ouch. A headbanger's ball from beginning to end. Coastersaurus — a woodie! — provided a far smoother ride. Tucked in the back of the park, this would be my first choice for an addition-by-subtraction upgrade should Legoland need a site for a future attraction. Or maybe just some extra open space.

The Great Lego Race was a virtual reality makeover of the park's old Project X coaster, a Mack Wilde Maus themed to Lego Technic at other Legoland parks, including California's. The VR is gone now, but the new name and entrance remain. 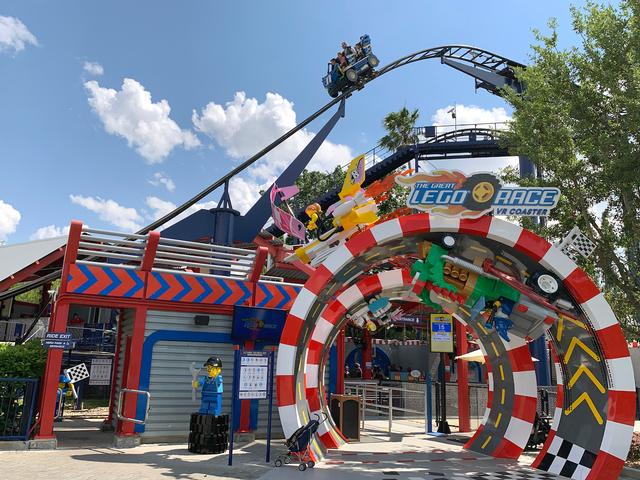 But let's return to Cypress Gardens before we call it a day. In addition to its botanical gardens, the park was known best for its epic water ski shows, a tradition that Legoland Florida continues with the Battle for Brickbeard's Bounty Ski Show. Here's the full show video... though I mercifully did not include the audience sing-along of "Baby Shark" from the pre-show. You're welcome.

Yes, Legoland is a children's park, and for that, they remain the world's best. But with its historic gardens, fun water ski show, a couple of neat coasters and shooters, and that new flying theater ride, there's plenty at this Legoland for even a parent of now-grown children to enjoy.

I visited Cypress Gardens with family on our first Florida trip in 1984. We sadly never got back but was happy to hear it revived, a classic of the state that deserved more love.

LEGOLAND Florida Resort also boasts 2 on-site resort hotels (going on 3) and there is a combo ticket with shuttle bus option that connects the theme park resort to the Merlin Midway Attractions Orlando Cluster on International Drive, which includes The Orlando Eye, Madame Tussauds Orlando and Sea Life Orlando. Main issue this park struggles with is the same issue that doomed Cypress Gardens, the road access problem. Makes it relatively difficult to access compared to the rest of Central Florida's theme park destinations, even for those of us who live relatively near geographically.

Never visited the park as Lego but it's former iterations I have and yes, the suspended coaster is terrible but the rest is great and I loved the gardens. My mom also was taken by the fact Elvis filmed there.

Great article! I know I was a little overly critical about Legoland, but I still would maintain that it is nowhere near the all day affair and value of any other park in Central Florida. They closed Island in the Sky and the last time I visited (which was in the Summer last year) Miniland was in serious need of some TLC (many of the structures looked really faded from the Florida heat) and many of the interactive elements were broken. I think if an adult visitor headed there at park opening you could be done with everything on that list by 2 pm. Ninjago is walk-on if you go at park opening. I'm not saying Legoland is terrible, just be smart and if you go make sure to get a discount. It's not anywhere near worth the $100-ish dollars that any other theme park charges for a 1-day ticket.

I think a solo adult would probably have trouble filling an entire day at Legoland. Cyprus Gardens is beautiful, but when we visited in October 2017, that section of the park was closed. I'm not sure what the operating schedule is for the gardens, but if they're closed, it's definitely a stretch to fill even a half day. The Ninjago ride is repeatable as is Lost Kingdom Adventure, but both are significantly inferior to Men in Black. The Dragon and Coastersaurus are decent, but certainly not worth anything more than a single ride. The Great Lego Race is a wild mouse that has identical clones all over the world, while Flying School similarly has clones at various theme parks around the world. Mia's Riding Adventure is an interesting flat ride that you don't find very often, and Miniland USA is definitely worth almost an hour of time.

Depending on how long the lines are (on our last and only visit in October 2017, we never waited more than 10 minutes for a ride), you can probably experience all of the unique, interesting rides for adults in less than 3 hours, and if you spend an hour at Miniland and another 30-45 minutes at the Ski Show, you would need to spend more than an hour walking through the gardens to get anywhere close to a full day's worth of activities.

I would say that the one thing that really annoyed me about Legoland was the overall park layout. I know the park didn't have much of a choice, taking over an existing park and gardens, but the way they've expended the park has not done anything to improve the flow. The park is long and skinny, kinda like Cedar Point, but the individual lands off of the central walkway often lead to dead ends. The Ninjago Land in particular was annoying with a hugely popular attraction and new themed area dead-ending at the ride. Flying School, is all the way at the top of the park, also at a dead end. A hub and spoke design is probably impractical with so much infrastructure already in place before it became Legoland, but I think park designers could have done more to eliminate all of the dead ends and limited pathways along the perimeter of the park.

@Russell Meyer - The Gardens are often closed when they have heavy rains, which happens alot in Summer.

I've never been but world's best for children? Better than Disney? I had never even thought of going. My kid likes Legos but isn't crazy about them. Now I might take another look at the place.

Rigby, I'd call Legoland world's best for children. Sure, Disney is King, that is if you're willing to put up with insane crowds and hour long waits for rides/character meet and greets. Thankfully, Legoland doesn't have to worry about that. We visited last year mid-June and got on everything within 15 minutes. The only ride we waited long for was the VR coaster, but it sounds like that's done.

What do you think about Disney's new theme park policies?