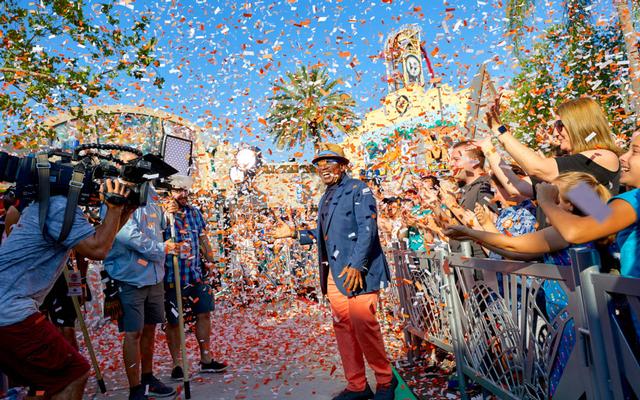 Al Roker walked the orange carpet for the opening, introducing the first of his signature dishes at the cafe, Al's Avocado Toast. I wasn't there for the premiere event but since I was at Universal today (for reasons that I will reveal later), I stopped in to try the new restaurant for the first time.

Living in the Los Angeles area, where avocado toast has been around long enough to make the jump from staple to cliche, I opted instead for a two-course lunch of The Bulls & The Bears sandwich ($13.99) and a Raspberry Chocolate Bombe ($4.49). 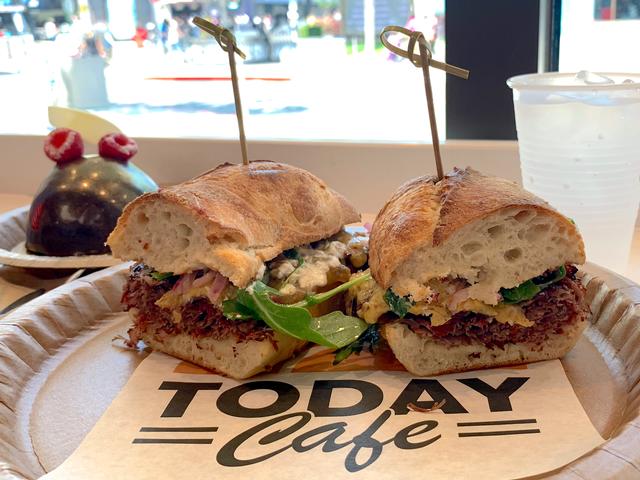 The Bulls & The Bears is, as Universal describes it, "smokey beef brisket, cheddar cheese, arugula, pickled red onion, horseradish cream, [served on a] warm crusty baguette." All the fat has rendered from the brisket, leaving it almost crispy in spots... but I love that. The cheddar restored a bit of richness, while the horseradish cream complemented the beef while never overpowering it. Just a delicious sandwich... and far tastier than typical theme park fare.

Two bites convinced me to ignore the accompanying potato salad, which tastes of bland potatoes bathed in watered-down mayonnaise. Skipping those carbs allowed me enough stomach room to polish off the sandwich's tasty baguette, however, so the potato salad did not languish in vain.

On to dessert! With so many sweets crowding the display cabinets, I went with my go-to strategy — ask the person behind the counter for a recommendation. She did not hesitate in suggesting the Raspberry Chocolate Bombe, a raspberry mousse enveloped in thin chocolate sponge and draped in chocolate mirror glaze. 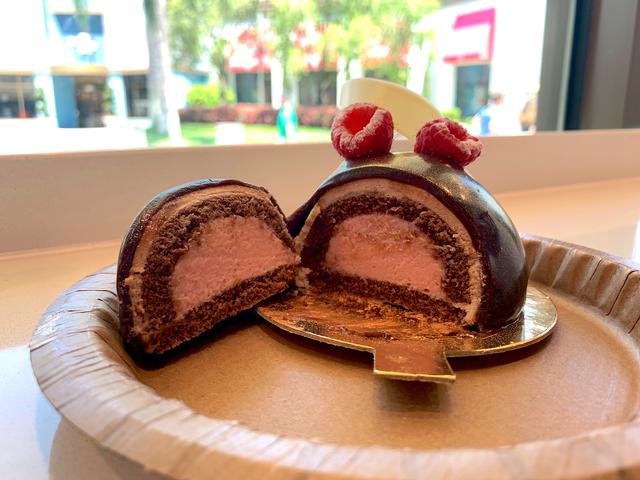 Chocolate and raspberry win over my taste buds every time, especially when they are not compromised by other flavors. This dessert was well worth the recommendation, so allow me to add mine.

The Today Cafe serves breakfast and lunch daily, with beer and wine available. You place your order at the counter and collect your drinks and sweets, while sandwiches will be delivered to your table. For some great deals on Universal Orlando vacations, including a "three days free" ticket offer, please visit our Universal Orlando tickets page.

Synergy at any cost. I can only conclude that Jack Donaghy is still running Kabletown.

"so the potato salad did not languish in vain." is the best thing I've read all month. Keep up the good work.

So? Why WERE you there? I'm clicking refresh here. . .

Will Universal finally be making its new park official? Nintendo? Both? Something so cool and secretive we have no idea yet? You revealing you were there for something that you can’t say yet is more interesting than the rest of the article. The sandwhich sounds good though.

Remember when I wrote a couple of Mays ago that I never again would do three media events in two days, on two coasts?

I lied. (Two were embargoed though, so stay tuned.)

Chad - I don't believe Jack was involved in this project. If he had been, I am sure we would have seen some high quality trivection microwave ovens in use behind the counter. Beyond that, I don't believe they have Cheese Blasters on the menu - shame.

Well...judging by the fact that they are now leveling the ground near Destination Pky and extending the privacy fence over to Shingle Creek, I'd say something is going on with that land...and will they ever stop digging up Sand Lake Road in that area??

I now feel the need for brisket and raspberries, those look great.

Ok, Robert, so how was the new Hagrid's Magical Creatures Motorbike Adventure?

Not a fan of the Today Show theme, but at least the food looks good. For now at least, until the menu changes as they always start out good and then go downhill at every theme park.

Well, when they inevitably change (ie: downgrade) the menu at the Today Show restaurant, perhaps they can open a new restaurant called Yesterday Show and put Today's menu there.

I don't think Robert is in Orlando for any new Universal park event. Probably more to do with Hagrid. But eventually we will get that news, and it'll surely be amazing.

@MrTorrance … came here to say the same thing, but you beat me to it. Just a matter of time before pre-made sandwiches and the standard issue Universal desserts are on the menu.

Never really watched the Today Show, but the food looked good, so I decided to give it a try. Haven't tried the desserts yet, but am looking forward to do so the next time I visit. But I did have, by coincidence (but also, the description sold it well) the The Bulls & The Bears sandwich. Delicious! But the best part is, for a theme park sandwich, it was a good price. Loved the place!

Looking to the future from the top of Disneyland's castle