"As part of original content created exclusively for the new ride, Owen, Claire and Dr. Wu will shed light on their interactions with the dinosaurs along with facts and information about the imposing prehistoric creatures that first roamed the earth more than 65 million years ago," Universal said in its press release, which included new teaser art for the ride. 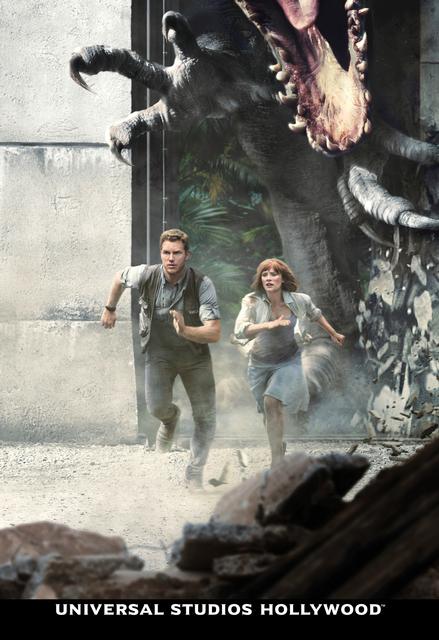 This will be Pratt's second appearance in a local theme park attraction, following Guardians of the Galaxy: Mission Breakout! at Disney California Adventure. It's Howard's first theme park appearance, but a return to the park for the Howard family, as her dad used to star in the old Backdraft show that was replaced by the Transformers ride.

Universal today also provided some more detail about the giant Mosasaurus that will features in the ride. We got our first look at the marine dinosaur in Universal's TV commercial for Jurassic World - The Ride.

"Appearing to span over 60 feet in length and tipping the scales at over 30K pounds through stunning state-of-the-art visual effects, the Mosasaurus is a sight to behold as she moves just inches away from guests throughout her glass enclosure filled with the equivalent of 3.5 million gallons of water," Universal said in today's release.

My first impression of this scene, which Universal has created by building a new show building around the flume from the old Jurassic Park ride, was that this looks like the PG-13 version of the whale encounter from Efteling's Symbolica [skip to 3:15 in that video]. Universal obviously is using a screen to create this scene, which is why the press release says "the equivalent" of 3.5 million gallons of water. But Universal Creative is bringing some tricks to make this not look like a screen to visitors, including the use of motion parallax and lighting effects to simulate the shift from day to night as well as changing light during inclement weather. The result should be a convincing view into an aquarium that's not really there.

Still no word on an opening date, though. Just "summer."

Now they need to make a Lego movie ride at Legoland featuring Chris Pratt so he can continue his domination over theme parks.

There is one at Legoland Florida, but it's pretty obvious that Pratt did not do the voice for it.

Chris Pratt has Merlin Entertainments presence regardless of LEGOLAND since his figure waxes poetic with their Madame Tussauds:)

Looks amazing. When will we get a Florida version?

We skipped Universal on our last two Orlando trips because there wasn`t enough new stuff. But if Jurassic World comes to Orlando, that`s going to be an absolute must.

Has anyone else seen the new Jurassic World construction Universal has on the Studio Tour? Near the bottom of the initial decline where the decades of Universal Studios movie posters are is a right-side entrance indicating Jurassic World that seems to take the tram parallel the ride queue.

@Still a fan - Universal is in the process of building a new Jurassic World roller coaster at IOA, presumably themed to the Gyroshperes. I'm not sure if they would take the River Adventure down for the JW upgrade while they're still building the new coaster, but I wouldn't be surprised to see them do so after the coaster opens to complete the full conversion of the land to JW.

Disneyland is bringing back Soarin' Over California