New Jurassic food and drinks on the menu at Universal Hollywood

The new, open-air, thatched-roof bar will serve tropical drinks next to the refurbished Jurassic World - The Ride and an also-refreshed Jurassic Cafe. 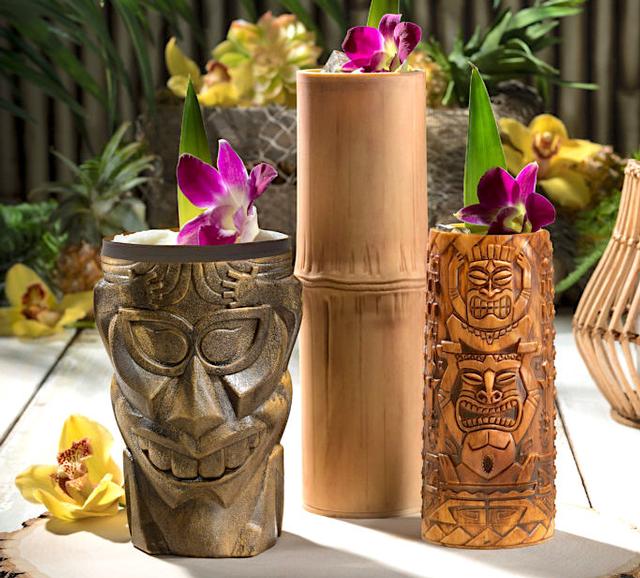 The Isla Nu-Bar menu will include tropical-themed cocktails such as Tiki Tai, Bird of Paradise, Ti Peach, Rum Runner, Mai Tai, Tropical Margarita, and Piña Colada. Drinks will be available in three models of souvenir tiki mugs (shown above). 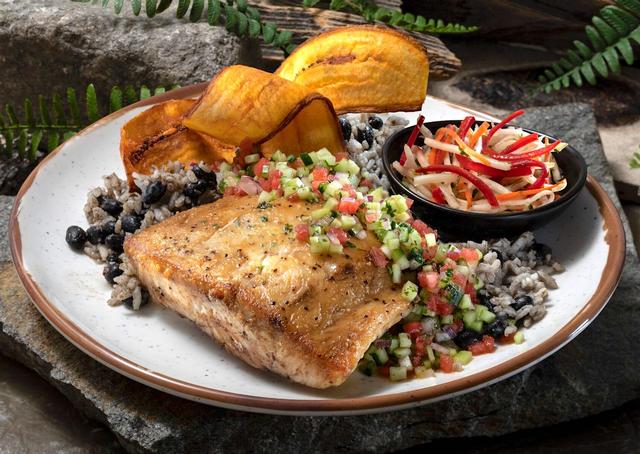 But the rest of the menu hits some notes not often found in theme parks and that should appeal to the Los Angeles area's diverse and adventurous food community.

Isla Nu-Bar also gives theme park fans in Los Angeles County a tiki bar to match Disneyland's Trader Sam's, as well as an IP-driven bar to compete with Oga's. Still no official word on an opening date fo the ride, though, other than "this summer."

Universal's food teams are killing it with their new concepts. But when will we reach a tipping point where the public sees food as an attraction in theme parks and expects - instead of turning their noses at - more diverse and interesting cuisine?

I think we're getting close, with fans embracing food events at parks across the country. But keeping dishes like these on regular menus continues to be a challenge for parks, due to popular demand... or lack thereof.

Props to Universal for taking a gamble. Most of these dishes look and sound pretty tasty. Hopefully the prices are fair and reasonable, and maybe just maybe this will have a chance. Jurassic Cafe is the only major eatery in the lower lot and if people go in expecting and demanding chicken strips, pizza, and burgers just like in the olden days than it might not last.

Honestly my money is on this being converted back to the standard fare listed above by next summer. I hope not, because Costa Rican food is certainly unique but I don't know if it will catch on. The bar should be a hit though.

Also what the heck. Why is Universal insistent on not announcing an opening day? It seems the ride is close enough to opening, I'm not sure why Universal doesn't have a day. I don't remember a theme park doing something like this, keeping people in the dark. Summer officially starts this week. I'm starting to believe it won't open until August and that is really unfortunate as a lot of people have been looking forward to it, including me. I'm sure members of the press will hear about a press conference or preview or something of the like that will be set up for publicity sake. Nothing of that sort has made its way into the internet so it just further postpones opening day.

Universal just tweeted that it's opening the bar TODAY. (!) No word on the ride, though the walls are down and it looks like it could soft at any time.

Darn, now I can't make my "They're going to say 'Opening' soon during a massive ad campaign without ever actually announcing the opening date" joke. [sigh]

What a fun concept and a great name! Though I'm a little bummed that the Tiki glasses aren't dinosaur themed. I would love a T(iki)-Rex glass to take home! With great companies like Geeki Tiki out there making pop culture mugs, seems like more specific mugs would be possible. Maybe later down the line!

>>>But when will we reach a tipping point where the public sees food as an attraction in theme parks and expects - instead of turning their noses at - more diverse and interesting cuisine?

Probably when its included in the admission fee.

I think the biggest issue with offering fancier and more diverse cuisine in theme parks is the menu prices. You can't offer a grilled snapper for the same price as a hamburger while still generating profit. That means people have to be willing to pay more for these dishes placed side by side against cheaper, more accessible options. When you're paying $100 just to walk into the gate of a theme park, many guests are looking to save money wherever they can, and unfortunately food is one of those places where guests are trimming their costs. When they see a 1/2 pound hamburger served with toppings and fries/chips for $5 or more less than a tiny portion of fish with some rice and beans, guests that are more concerned about their bank accounts than their palates are going to naturally gravitate towards the burger.

Also, there's an increased cost in terms of not just the raw ingredients for these fancier dishes, but in terms or preparing and holding them. When preparing fish or vegetarian entrees alongside burgers, you have to use discrete grills/cooktops and increase the level of training for staff that cannot handle a delicate filet of fish the same way they would flip a frozen burger patty. Also, these more exotic dishes cannot hold in a warming area like a burger and fries, so they either need to be prepared fresh to order (causing frustration from guests that have to wait longer) or being more expeditious at tossing prepared plates that are beyond their hold time at increased cost due to food waste. Finally, because guests are going to be paying more for these fancier dishes, they will increase their standards, even if the food is still coming from the same chefs that are making the burgers. A $20 snapper dish has to be significantly better than a $14 burger or guests won't order it anymore, and the park cannot decrease the price of the fish without turning it into a loss leader.

The bottom line is that I think if theme parks want these higher end dishes to succeed, they need to place them in exclusive restaurants and away from other places serving more generic fare. Putting fancy, expensive food within reach of burgers and fries is a recipe for failure because of simple economics, not necessarily because guests don't want the more adventurous options.

Chad H makes an interesting point. Disney and Sea World have actually been somewhat successful in getting guests to expand their culinary horizons not just because of their food festivals, where guests can purchase smaller portions of more exotic foods at lower prices, but through their dining plans. Both chains make pretty much their entire culinary menus open to guests purchasing their dining plans. Guests that are more value-conscious will naturally gravitate towards the dishes with the higher menu prices knowing that they paid a flat fee regardless of what items they choose. Food is a sunk cost before they even enter the park, so the menu prices are mostly irrelevant to their selection, allowing guests to be more adventurous when making choices, and on an "all-you-can-eat" plan like at Sea World, they will not feel guilty if the exotic dish that they may be trying for the first time is not necessarily to their liking. Universal has a similar dining plan, but it limits what guests can purchase on it, and usually eliminates anything beyond standard theme park fare.

Theme parks are making strides to try to get guests to be more open when eating in the parks, but I think as long as guests are paying a fortune just to enter the parks, there will always be a hesitancy to pay a premium for fancier theme park food.