July 31, 2019, 2:11 AM · The Disneyland Resort this evening hosted a media preview for its rebooted Halloween party, Oogie Boogie Bash, which kicks off September 17.

The after-hours, hard-ticket event replaces Mickey's Halloween Party and will run for 20 select evenings at Disney California Adventure. In addition to previews of the event's food and merchandise, we were invited to watch a rehearsal of the new Halloween-themed World of Color show that will run exclusively during Oogie Boogie Bash, Villainous! (No video was permitted during the show.)

Villainous! could have just mashed up clips from songs featuring notable Disney baddies and everyone watching likely would have walked away happy with that. Heck, that's what I expected from the show. But Creative Director Steve Davison and his team opted instead to workshop something different — the first World of Color production driven by a traditional narrative.

Walt Disney Animation Studios' Eric Goldberg, who was the lead animator for the Genie in the original Aladdin, has created "Shelley Marie," a nine-year-old girl who's trying to decide whether to be a princess or a villain for Halloween. (If you reverse her names and end up with the author of "Frankenstein," you'd not be wrong.) Host Oogie Boogie suggests that she do what Wicked Queens always do and ask her mirror for advice. 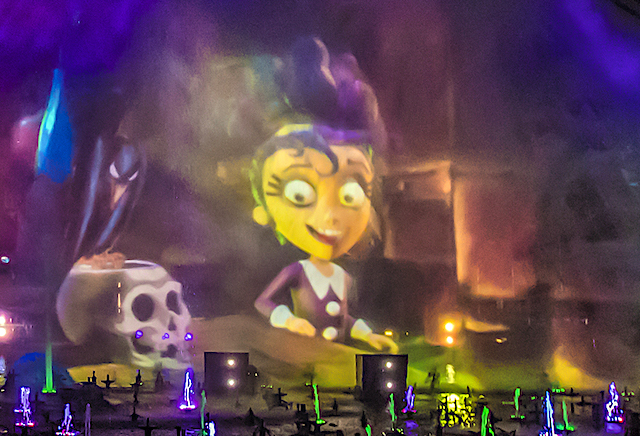 She does, and the mirror lures her into an adventure that delivers her to the Wicked Queen, then on to Ursula, Dr. Facilier, and Hades, before the climatic encounter with Maleficent. 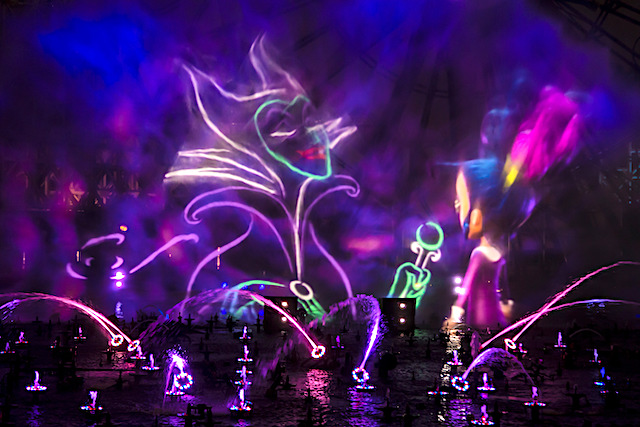 Musical interludes connect the encounters but it's Shelley Marie's journey that drives the show. That gives the production a very different feel than all previous iterations of World of Color, which each play like a slightly different "Now That's What I Call Disney!" music video collection.

Ultimately, though, Disney cannot deny what's in its DNA. As much as this show sets out to celebrate villainy, in the end Disney concludes Shelley Marie's journey with an earnest message about being yourself... followed with an upbeat dance number set to A Taste of Honey's "Boogie Ooge Oogie." You can be a princess or a villain for your Disney Halloween, dear, but there's no escaping a happy ending.

Villainous! is just one of four new entertainment offerings from Disneyland, as it moves its Halloween party across the esplanade and tries to lure people from the event's often-clogged trick-or-treat lines. Villains Grove takes over the Redwood Creek Challenge Trail with a "hauntingly beautiful" collection of scenes inspired by select Disney villains, including lighting, projections, and other visual and audio effects. This isn't a meet-and-greet takeover, like Santa moves in here for the holidays. Instead, might this be called... Disneyland's first Halloween maze?

Show Director Jordan Peterson agreed with that assessment, while also pushing back against it ever so gently.

"My only trepidation in labeling it that way is that there's such an association with a 'Halloween maze,'" he said, referencing the term's association with horror-based attractions at a couple of other parks up the I-5.

"It comes with baggage — wonderful baggage that I love to experience — but if you want to look at [Villains Grove] as a walk-through environmental element, then yes," he said. "The other big difference is that there's no physical [scareactor] presence there." 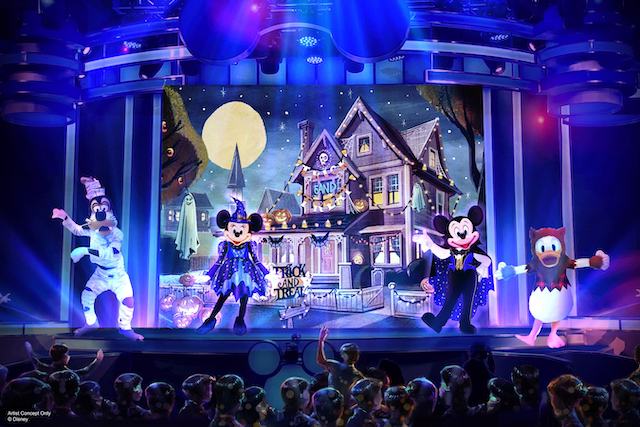 Other new entertainment elements for the party include a "Mickey's Trick and Treat" stage show in the Disney Jr. Dance Party theater, featuring songs, dance, stories and a candy treat at the end, plus "DescenDANCE," a more tween-focused production on the Hollywood Land backlot stage. That show will feature the "Villain Kids" from the Descendants franchise eventually leading the audience in learning dance moves for songs from those movies. 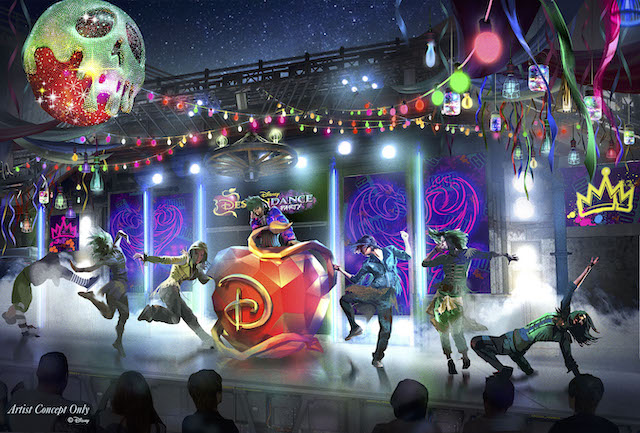 The Frightfully Fun Parade will make the trip over from Mickey's Halloween Party, as well, with only a couple of minor tweaks: a shorter Maleficent to accommodate the overhead Red Car cables on the DCA parade route, and the Cheshire Cat replacing Vampirina.

The facade of the Carthay Circle Theater also will come alive with projection mapping throughout the nights of Ooogie Boogie Bash, while rare Disney characters come out to meet party guests, too.

And if bags of candy from the new interactive treat trails isn't enough for you to haul home, Disney will offer plenty of themed food and merchandise during the party, most of which will be available in the parks' regular hours during the Halloween Time season.

Oogie Boogie Bash runs Tuesday, Thursday, and Sunday evenings from September 17 through October 31, with tickets ranging from $110 to $145 per person per night. Tickets are available on the Disneyland website.

Quick question Robert - you mentioned new original animation. Was there any original music composed for the new show?

Thanks for the info Robert. I’m wondering - do you think that they’ll continue to show the regular version of World of Color on non-party nights? We are heading to the resort in October and are not planning on attending the party but really want to see World of Color

On an unrelated note, I can't wait to find out what Universal is going to announce tomorrow!!!!

Yes, regular WOC on non-party nights. I’ll check on music. There is original music elsewhere for the party, but I don’t have my notes in front of me now to confirm that’s also for Villainous too.

Can we even refer to this as "Villainous World of Color" these days- especially in California?

Will Universal Orlando's next thrill ride be the Velocicoaster?