Disney's original nighttime parade has returned for another limited engagement, starting this weekend and playing at Disneyland nightly through the end of next month. To celebrate the parade's return, Disneyland also rolled out a new collection of souvenirs and snacks. 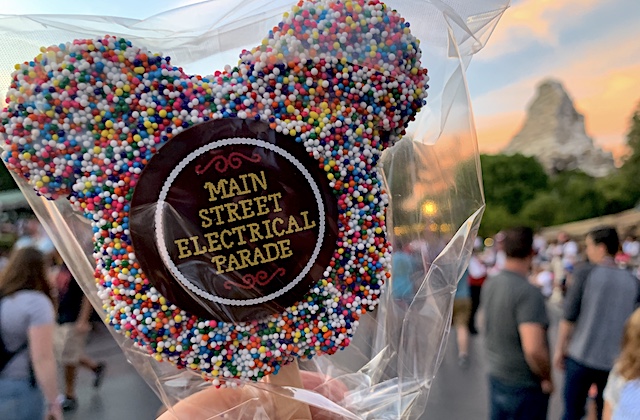 In addition to the parade-themed krispie treat, marshmallow "caterpillar" wand, and cake pops, Fantasia ice cream has returned to the Gibson Girl Ice Cream Parlor for the parade's run. A modified spumoni of cherry, pistachio, and banana ice creams, my serving came in the Fantasia Waffle Bowl Sundae [$7.99], which comes with caramel sauce, chocolate candies, whipped cream, and a cherry. 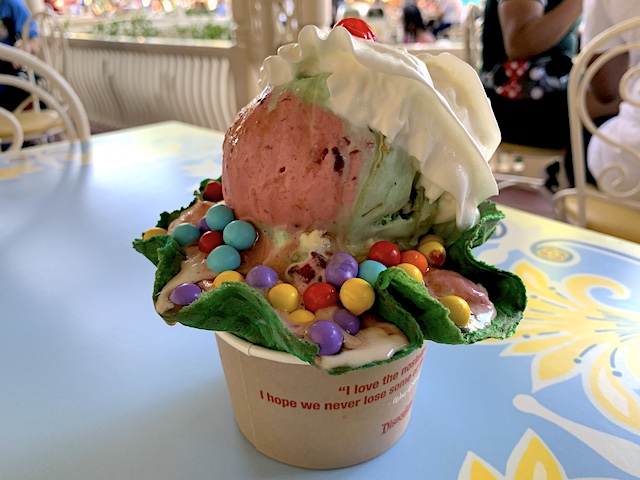 The caramel sauce starts melting the rest of the sundae pretty much immediately, precluding a truly glamorous photograph. There's more then enough to share here, and the ice cream probably could have stood on its own without the accompaniments. The cherry and pistachio flavors delight, and it's always fun to tear into one of the waffle bowls that you can watch Disney's cast members making behind the window next to the Gibson Girl's mobile order pick-up counter.

But enough with the diversions. As the sun sets, it's time for the main event of the evening.

Yeah, it's pretty much the same parade as when we last saw it at Disneyland, two years ago. But judging from the cheers of the crowd when "Baroque Hoedown" came over the park's loudspeakers once again, fans still love it. So Disneyland keeps bringing it back.

Current and or future parades may have more impressive floats but I doubt there will ever be a better soundtrack to a parade than the Baroque Hoedown. It is musical joy.

I agree, Rob! I think it's the nostalgia of the music that people really enjoy. I had a little record of the soundtrack that probably dated back to the first year or two of its existence at WDW and I used to play it constantly. Probably drove my mother insane....

I'm not going to argue that this parade is better than those that have come since, but if someone were to ask me to describe a Disney parade this is the one that comes to mind. Perhaps its because the parade has a certain timeless quality to it, perhaps it is because the soundtrack is ridiculously awesome (more the original version than the remaster), or perhaps it is simply because the parade is more Disney than most of what has come out of the company in the past 15-20 years. In any case, if Disney were to extend this to an open-ended run, I certainly wouldn't complain...I'd rather they run it seasonally for the foreseeable future then keep bringing it back for limited engagements.

The quintessential theme park parade- iconic. And gives me the warm and fuzzies in a way similar to comfort food no matter which Disney Destination I encounter it in;)

We saw this on opening night also across from Small World, and the crowd was ecstatic. I thought it was moving very slow, and there were a few technical glitches, which are expected for its first run out of mothballs.

However, there’s not doubt that the music is one of the most memorable soundtracks in theme park history.