The Lego Movie World is coming to Legoland California

August 15, 2019, 1:47 PM · It's a big day for 2020 attraction announcements, and we're kicking it off with Legoland California. The resort announced today that it will be bringing The Lego Movie World to the park next year.

We visited Legoland Florida last spring for the debut of the original Lego Movie World. Like in Florida, the California installation will feature The Lego Movie Masters of Flight flying theater show and the Unikitty's Disco Drop tower ride. However, since Legoland California already has a Splash Battle over in Pirate Shores, it appears that this new version of the land will not include the Battle of Bricksburg that Florida had as a retheme of its old Quest for CHI ride.

[Update: Legoland California's extended press release says that visitors will be able to "ride a fully reimagined carousel" and the park's updated map includes a "Something Awesome Coming 2020" sign overlapping Lego Friends Heartlake City, so it appears that The Lego Movie World will be replacing at least part of that land and will include a rethemed Mia's Riding Camp.]

Looking back at the Florida originals, Unikitty's Disco Drop offers a cute screen effect atop the tower, showing Unikitty's reaction to the motion of the ride.

There's also a rocket play structure in the middle of the land, Benny's Play-Ship. 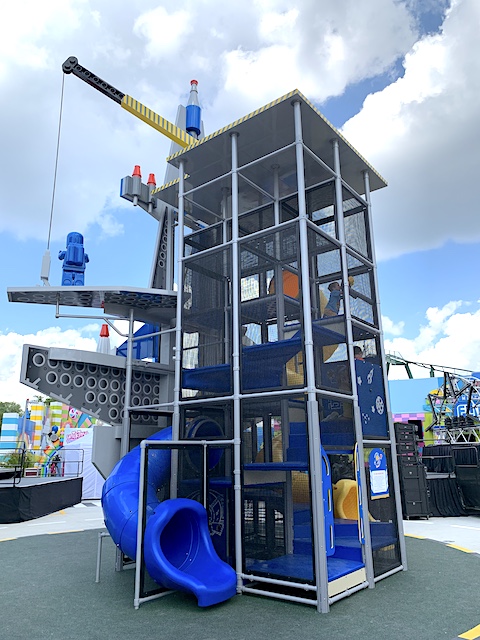 Back side view of the Florida installation, so you can see better the play elements.

But the highlight of the land is Masters of Flight, a delightful flying theater adventure that carries on The Lego Movie's schtick of abundant cultural references with call-outs to several other theme park attractions, including Universal's Despicable Me Minion Mayhem and Disney's Flight of Passage.

The Lego Movie World at Legoland California is scheduled to open in spring 2020.