September 7, 2019, 1:26 AM · Universal Orlando kicked off its 2019 season of Halloween Horror Nights Friday night. The 1980s theme returns this year, and Universal is doubling down with one of the greatest hits of the decade.

The return of Ghostbusters to Universal Studios Hollywood, for the first time as a Halloween Horror Nights house, promised to be the big story of this year’s event. But while the Ghostbusters house amazes, it didn’t crack my top three houses of the evening.

That’s not a knock on Ghostbusters. That’s just testimony to how stacked this event is this year. I cannot think of another theme park special event that delivers the volume of fresh entertainment that Halloween Horror Nights does: 10 all-new houses, five new scare zones, and two new shows — plus the “regular” park attractions that are open for the evening.

No wonder that this event leaves me completely spent every year I cover it. Short of covering the opening of a brand-new theme park, no event crams as much new to discover in one evening as Halloween Horror Nights does.

Perhaps that’s why Horror Nights has become a lifestyle for so many of its fans. You almost have to commit to that level in order to take it all in each year. Universal presents each of its 10 houses with levels of detail that command repeat visits. I don’t care if you get the all-inclusive RIP Tour, as Universal provided to its invited media guests tonight. Even that’s not enough to catch - and fully appreciate - all that HHN has to offer.

But let’s give it a go anyway, shall we?

Before the event, I sat down with creative leader Michael Aiello to talk about how his team puts together this event.

Sorry, Mike. I’m going with the Mind Flayer. (Confused? Ya gotta watch the video, then!) But before we get to the houses, I want to offer a well-deserved shout-out to Horror Nights’ two shows, including our first lagoon show created especially for the event — Marathon of Mayhem.

Employing the same projection systems, water mist screens, and fountains as Universal Orlando’s Cinematic Celebration, Marathon of Mayhem incorporated moments from the Universal Monsters, Killer Klowns, Stranger Things, and Ghostbusters. The show nails its emotional beats, reminding us why so many of us feel in love with these franchises.

On the Fear Factor stage, Academy of Villains returns with a new production, Altered States. This was my first time watching an AoV show, and this hard-rock/hip-hop/horror ballet definitely impressed. With a contortionist, silk aerialist, and soccer-ball trickster leading a crew of dancers, there’s too much on stage at any given moment to watch it all. But I didn’t want to miss any of it. 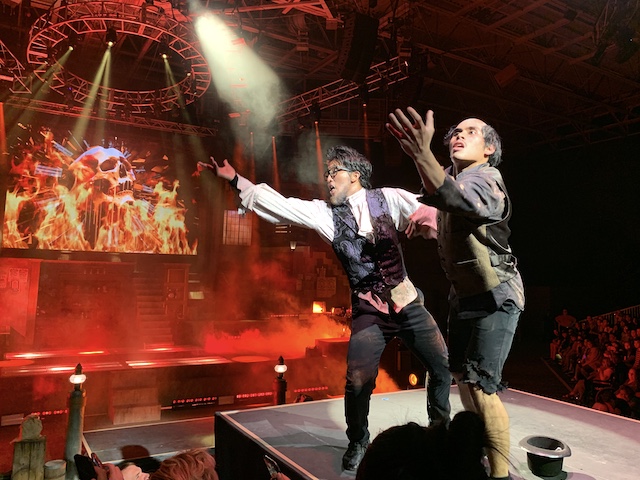 Okay, now on to the houses. First, my disclaimer. These rankings are based on one walk through of each house. I do not doubt that if I went through each house again, that would scramble my ratings. They’re all that close.

So we start with my favorite of the evening, one of Universal’s original concepts. Yeti: Terror of the Yukon is a gorgeous production. It just feels different than the other houses, in large part due to the aggressive air conditioning that helps convince you that you’ve stumbled into the mid-19th century Canadian wilderness. The fur dividers between scenes also provide tactile reinforcement of the setting among trappers taking shelter from a blizzard… only to find a much deadlier foe in their camp.

Stranger Things this year includes seasons two and three of the Netflix hit. But that’s too much for one maze. The finale here offers the largest puppet ever created for HHN and it elevates this house to the top half of my list. But I would have rather seen Universal focus on the more maze-friendly season three here to make this an all-time great.

I was surprised by how much I enjoyed Killer Klowns from Outer Space. I suspect that I immediately lower my expectations for anything involving clowns, but as our tour guide reminded us, these are aliens, so, hey, that makes them cool, right? Okay, whatever, I was swept up by the wonderful cheesiness of it all. And I enjoyed getting squirted when I foolishly pushed one of the big red buttons.

How could Ghostbusters not be higher? Maybe I fell in love with some of the scenes in Hollywood’s version (especially the practical Stay-Puft Marshmallow Man), and the differences here left me a little less enthusiastic. But there are plenty of amazing scenes in this version and I’d eagerly recommend it.

Rob Zombie’s House of 1,000 Corpses delivered non-stop horror camp, sucking me right into the experience. If you’ve been to more than a few haunts, you probably know that your “hit rate” in any given house can vary wildly, as scareactors time their bits. Sometimes, it seems like you walk up to every scareactor as they are resetting between hits. But sometimes, you time your walk through perfectly. I felt like this one was my best-timed house of the night, which surely moved it up some spots on my list.

I love the production design in Universal Monsters, which gives each of Universal’s classics, from Dracula to Frankenstein’s monster and down the list, a moment to scare the life from you. This is another house where I wanted to linger, to better appreciate the work put into it.

Depths of Fear shows the power of sound design in creating a terrifying environment. The countdown in this undersea mining station amplifies your distress as the “mouthbrooders” attack the station’s residents, spraying their eggs upon them – that soon enough will hatch and devour everyone aboard.

There’s some great design work in Graveyard Games, too — a revenge tale as the residents of a Louisiana graveyard fight back against a teen couple who defiled their eternal resting place with graffiti. Maybe I just mistimed this one, but this house seemed more like a dark ride than a HHN house, with far fewer scares then I expected.

Nightingales: Blood Pit easily wins the “Most Blood” award at this year’s HHN. If you like gore more than I do, feel free to jump this one about four or five spots up your list.

Finally, Jordan Peele’s Us does an amazing job of bringing one of the year’s best movie to life on the HHN stage. I loved this house and cannot believe that I am rating it 10 or 10. Again, it’s testimony to how stacked this line-up is this year. This house was so good, it felt like I was walking through a four-minute summary of the movie… instead of living my own experience with the characters and settings, as I felt in the other IP houses. That feeling knocked this one below them, for me.

But as I said, gimme another pass through these houses, I am sure that I would change my mind. That’s why Halloween Horror Nights runs for more than 40 evenings this year. And why a lot of fans will be there for many of them.

By the way, if you are staying at one Universal's on-site hotels when you visit for HHN, especially if you stay at the Cabana Bay, there's a pop-up photo op for Stranger Things fans who wish they could take time for a photo in the maze.

This #StrangerThings pop-up is open to Universal hotel guests from 2-10pm during #HalloweenHorrorNights (Cabana Bay guests get priority). It’s upstairs by the bowling alley and also includes a Scoops Ahoy photo op. pic.twitter.com/69PImsGyPx

Thank you for the great review, the video's and the interview. Wish I could visit this year.

Awesome glad to hear that all the houses are worth it this year. Can't wait to go and to watch your videos when I come back. Didn't want to spoil anything so had to skip those. I'm especially interested in the interview with Michael Aiello.

The Universal mazes are always good, although my fave Halloween event is the Haunt at Knott`s Berry Farm in California. Lower budget, but more creative in non-IP mazes and often unpredictable scares.

The off-season is back at SoCal theme parks