Knott's raises its game with the return of Scary Farm

Knott's has added two new mazes for this year's event — Wax Works and Origins: The Curse of Calico.

Wax Works tells the story of Dr. Augustus Scratch, a once-prominent plastic surgeon eager to show off his new work — accomplished by dipping his patients into cauldrons of molten wax. Like many Knott’s mazes, the production design here includes some visually amazing set pieces, peaking within the finale where we see Dr. Scratch at work, though at least one of his patients, it seems, would prefer a refund.

Origins: The Curse of Calico gives us the backstory of the fog that shrouds the Ghost Town Streets each year during Knott's Scary Farm. It all started with the hanging of Calico's Sarah Marshall for witchcraft. But those who judged Sarah were up to some misdeeds of their own, evoking the wrath of the witch, who curses the people of Calico, transforming those who accused Sarah into zombies who wander the fog.

The new mazes replace the retired Trick Or Treat: Lights Out and Red Barn. The difference between this year's rookies and those retirees illustrates just how much Knott's has been raising its game in recent years. Wax Works compares favorably with last year’s mine-themed The Depths and sci-fi adventure Dark Entities, which also featured some amazing visuals, including the use of fog and lasers to simulate the ocean surface in The Depths as well as some outstanding use of puppetry in Dark Entities.

But Origins surpasses them all, easily becoming my favorite maze of the event. This is the epic walkthrough backstory that Ghost Town deserved, with well-detailed set pieces, an engaging story and a stunning finale with an aerial witch, performing above our heads as we try to escape.

Other returning mazes include Shadow Lands, Paranormal, Inc., Pumpkin Eater, Dark Ride: Castle of Chaos, and Special Ops: Infected, which is appearing for its final year.

This year's new show in the Charles M Schulz Theatre is Puppet Up! Uncensored, an adults-only comedy improv show from The Jim Henson Company. Created by Brian Henson and both directed and hosted by Patrick Bristow, this isn't the Muppet Show from your youth. (In case you are wondering why they don't use the "M" word for these puppets, remember that Disney bought that.)

Bristow encourages the audience to shout prompts that the cast of puppeteers twist in brash and bawdy bits. The puppeteers do their thing in front of a camera set center stage, allowing you to shift your attention from them to the camera's view, shown on screens at either side of the stage. It's a fascinating perspective, that allows you to see the work that goes into animating these characters.

And if you are long-time Henson fan, as I am, there's a delightful moment of wish fulfillment here, too, as Brian Henson takes the stage to welcome an audience recruit, who gets a crash course in puppetry before joining the cast in a sketch. 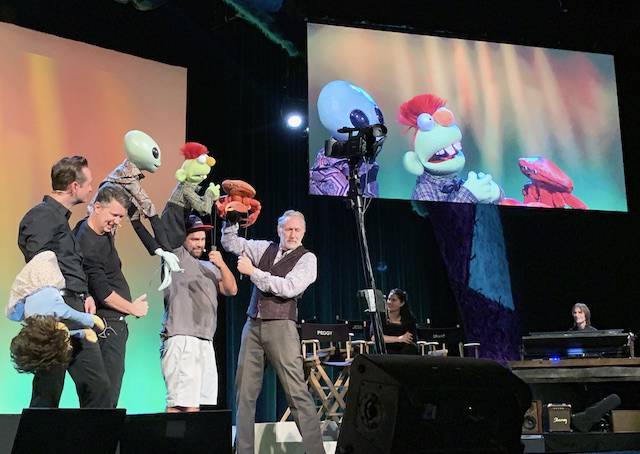 While the demographics of this adults-only show match well with Scary Farm, the bawdy comedy ain't horror, which is perhaps why the opening show played to a relatively small crowd of a couple hundred people in a mostly empty theater, even if all of us laughed until we couldn't breathe. Yet many more crowd the Ghost Town Stage to watch The Hanging each year. Perhaps a few of those Scary Farm fans might try the far better show inside the Schulz Theatre.

Other returning shows this year include Conjure - Magic and Mirth at the Birdcage Theatre and the Awaken the Dead DJ dance party in Fiesta Village. The four scarezones also return: Ghost Town Streets, Carnevil, The Hollow, and Forsaken Lake... but at Knott's pretty much the entire park is a scarezone, so there is no escape. Which is just the way Scary Farm's legions of fans like it.

Being raised in “The OC” - this was always my favorite event. For my 50th in mid-October, we’re heading down to experience the event. Thanks for the recommendation on the Henson show! And now I can’t wait for the Calico house.

Spectacular night as always! Neat running into you there Robert! Highlights for me this year are definitely the Origins maze and Puppet Up, and of course the Into the Fog gallery show. FYI, inside sources say Brian Henson will not be there every night, but will show up on occasion.

Thanks for saying hello AngryDuck! Always a pleasure to meet readers IRL. I just wish I had more time at these press events to chat.

Henson being there was definitely a surprise. Knott's has pretty much stuck to horror with its mazes instead of pursuing the crossover appeal that Universal has with houses such as Ghostbusters and Stranger Things. But it's always had a strong comedy element with its shows, and Puppet Up! might be its best yet.

It's the audience just barfing its id... and the cast illustrating that with puppets. Fun stuff.

Universal confirms 2021 opening for its first park in China