The Nickelodeon Universe theme park welcomed a sell-out crowd of more than 2,500 fans to its debut today, including New Jersey Governor Phil Murphy. 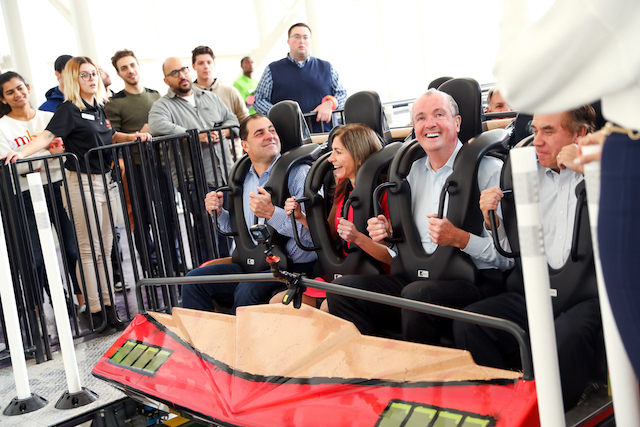 The park is part of the first phase of the American Dream development, which also includes The Rink - an NHL-regulation-sized ice rink that will host open skating, figure skating, hockey tournaments, and other events. Future phases will include the DreamWorks Water Park (opening November 27), Big SNOW - North America's first indoor ski and snow park (opening December 5), and a major new shopping mall, including a Sea Life Aquarium, Legoland Discovery Center, and 300-foot observation wheel. All that opens in March 2020. 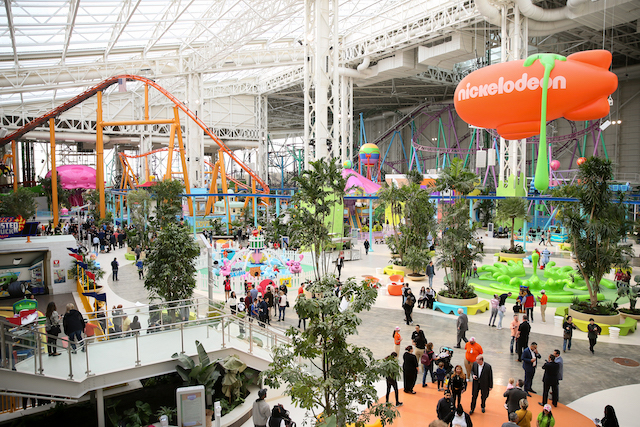 Highlights in the theme park include two Teenage Mutant Ninja Turtles-themed Gerstlauer coasters: The Shredder - a spinning coaster with an 85-foot drop, and The Shellraiser - a Euro-Fighter that ties the record for the world's steepest drop with a 121.5-degree plunge. That one also features a 62-mph launch, along with two corkscrews, a heartline roll and a banana roll. 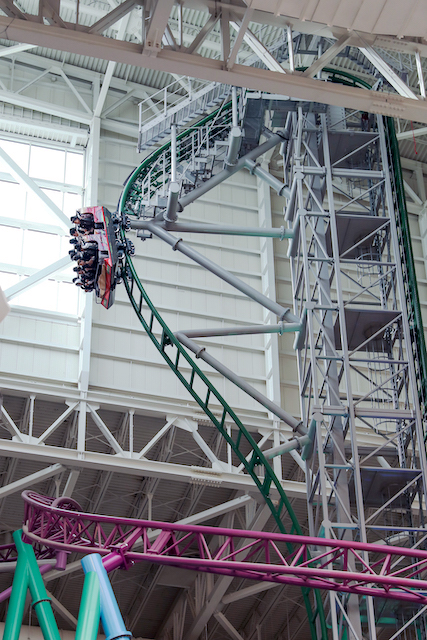 Here is the rest of the Nickelodeon Universe line-up, courtesy the park:

Aang’s Air Gliders - Hold on tight as you soar and spin like an Airbender! After your flight you can snap a photo with Appa, Aang’s sky bison.

Blaze’s Monster Truck Rally - Rev up and roll out with Blaze and his friends for an epic race in the Monster Dome.

Blue’s Skidoo - Blue Skidoo, you can too! Make Blue and Magenta soar up, down, and all around! Then, sit down in the Thinking Chair to think… think… think with a little help from your good friend Blue.

Dora’s Sky Railway - ¡Todos a bordo! Join Dora for a trip aboard her little blue train friend, Azul. First, a hot air balloon floats you up to the rail station in the clouds. Then you’ll board Azul for a sky-high journey featuring scenic views of the park from the elevated tracks.

Timmy’s Half Pipe Havoc - Take a not-so-ordinary spin on the halfpipe with Timmy, Cosmo and Wanda. This giant skateboard ride provides the ultimate in airtime!

Fairly OddAirways - When Timmy wishes to become a pilot, you get to go along for the ride! With the wave of a wand, you’re ready for takeoff. This thrilling flight through the clouds is a wish come true for the whole family.

Invader Zim’s Flip & Spin... OF DOOM! - You’ve been recruited to battle aboard planet Irk’s latest militarized spacecraft. Aid in Zim’s invasion as you flip, spin, and bump into unsuspecting humans.

Jimmy Neutron’s Atom Smasher - Jimmy Neutron needs your help to supercharge his latest invention. You control the level of thrill from gentle cruise to a topsy-turvy tumble … all in the name of science!

Legends of the Hidden Temple Challenge - Olmec challenges all to scale to breathtaking heights in the world’s tallest adventure ropes course. How high will you climb to reach the Shrine of the Silver Monkey? The choices are yours and yours alone!

Nickelodeon Slime Streak - As this coaster streaks along a twisting, turning track through Nickelodeon Universe, it leaves nothing but a Slime streak of screams in its wake.

PAW Patrol Adventure Bay - Get on a roll with the PAW Patrol! The slides, climb structures and rescue-play activities in Adventure Bay are specially designed for the younger pups.

Pup Pup & Away - Join Marshall and the gang on a PAWsome Ferris wheel that’s an adventure for the whole family.

Ren & Stimpy’s Space Madness - Join Commander Hoëk and Cadet Stimpy on a 36-year mission to the Crab Nebula. Strap in, hold on and prepare for launch… but try to avoid the dreaded SPACE MADNESS!

Rugrats Reptar Go-Round - Hop on Reptar’s back or take a spin in a giant sippy cup on this double-decker, all-ages merry-go-round.

Shimmer & Shine Jumping Genies - Climb onto your very own magic carpet as you take a genie-rific ride through the skies of Zahramay Falls.

Sandy’s Blasting Bronco - Yeehaw! Sandy, our favorite Texan squirrel, and mechanic Patrick have built an out-of-control coaster contraption. Saddle up as it blasts you forward, backwards, up, down and even upside-down!

Kraang Prime Pandemonium! - Kraang Prime has the innocent citizens of New York in her clutches. Can you endure swinging back and forth in her giant, slimy tentacles?

American Dream is a development of the Triple Five Group, which also runs the Mall of America and West Edmonton Mall. Special timed preview tickets for Nickelodeon Universe are available at www.americandream.com from October 28 through November 7, as the opening weekend is sold out. Ticket prices are $39.99 for General Access and $49.99 for All Access (which includes the top thrill rides). Children two and younger enter for free.

Update: Only 17 of the park's rides were permitted to operate at opening today, according to a local news report.

Google maps says this is about a 3 hour drive for me. However, like with GE, I'm gonna wait until more is open before gassing up the car!

I'm not sure if it's because so many rides are not operating yet, or because the entire complex is still a work in progress, but there hasn't been much media coverage of this opening. Even the coaster/theme park media have been pretty quiet about this project. Did the public relations department even contact non-traditional/non-local media to cover the opening?

I think the location is going to make this a tricky sell. The reported parking rates are beyond bizarre. They're charging $3 for up to 3 hours (first 30 minutes are free), $4 for 3-5 hours, $5 for 5-7 hours, and $6 for 7-8 hours. However, if you stay for 8+ hours, they tag you with a $24 parking fee. That's a pretty big jump to triple the cost for staying 7 hours and 59 minutes versus 8 hours flat. Even if you only spend a few hours at the theme park, but decide to do some shopping, have a meal, and/or take a run down the ski slopes, you could easily spend 8+ hours here, inflicting yourself with the massive parking fee.

The biggest problem is that the only mass transit solution to the complex is by bus (though you can catch an express bus directly from the Port Authority Bus Terminal on Manhattan). None of the NJIT commuter rail or light rail stations are anywhere close to this complex, and even with nearby MetLife Stadium, there are no plans to enhance the mass transit options to this part of New Jersey. I'm sure there will be plenty of upwardly mobile New Yorkers driving over here and spending their seemingly unending supply of cash, but I wonder if an indoor theme park like Nickelodeon Universe can survive off the backs of the uber rich.

I'm glad that I didn't go when all the rides aren't open yet. There have been articles reporting 35 rides but that doesn't match with the list of announced rides, likely those numbers include the upcoming Dreamworks Water Park. As of now, they are only selling wristbands for four hour time slots and have no options for season passes. I doubt they will have very many repeat customers with that business plan.

@JJmusic - Not only are they only allowing guests to visit the park in 4-hour time slots, they are charging $50 for those 4 hours (with limited rides actually open and running). Supposedly, the price will jump to $80 for an all-day pass once they eliminate the current 4-hour promotional tickets next month. That seems really pricey for a relatively small park, especially when you tack on the absurd parking rates.

I guess it's easier to lower ticket prices and offer promotions than it is to increase prices when crowds get out of control, but I think EVERY new theme park needs to study the failures of Hard Rock Park before they set their admission prices and promotional strategy. HRP had a similar "build it and they will come" mentality, and instead of offering affordable admissions to build a fanbase, they immediately started a flat-rate ticket price of $50, which was higher than any other regional park at the time, with very expensive season pass prices. The result was an initial surge of guests intrigued by the concept, but few returning to the park because there was little value in spending such high prices to revisit a park that was not repeatable.

Wings Over Washington is a flying theater done right