It's the most popular time of the year at Disneyland

November 9, 2019, 11:45 AM · If there's a lesson to be learned from Disneyland this year, it's that, despite the global popularity of Star Wars, Pixar, Marvel, and even Mickey Mouse, the most powerful "franchises" among Southern California's theme park fans are Halloween and Christmas.

Recent financial reports confirmed what everyone here saw — that attendance was down at Disneyland this spring and summer. We might still be awaiting final word on attendance for the final four months of 2019, but visiting the park, you'll find that the crowds are back.

Disneyland fans love Halloween Time and now, the Holidays at Disneyland Resort. After a quick changeover from Halloween this past week, the Christmas celebrations kicked off this weekend at Disneyland and Disney California Adventure.

It's all about tradition at Disneyland... which is a positive way of saying that not much has changed at Disney's oldest park for this year's celebrations. The biggest change is likely the addition of new smells to the It's a Small World Holiday overlay.

Beyond that, Disneyland fans will welcome the return of the 60-foot Christmas tree on Main Street, the Believe... In Holiday Magic fireworks, and the annual A Christmas Fantasy Parade - running for its 12th season in its current format and 25th overall.

Haunted Mansion Holiday continues for the back half of its hybrid holiday fun, and the It's a Small World facade shines with its holiday lighting each evening at dusk.

The light-up moment for the It’s a Small World Holiday facade this evening. #disneyland pic.twitter.com/YPGjE5skMH

Over at Disney California Adventure, the park has added the Mickey's Happy Holidays character cavalcade to the line-up this year, with Mickey and friends, accompanied by the Toy Soldier Drummers, entertaining guests from Paradise Park To Carthay Circle and back twice daily.

Returning events include the holiday overlays Mater’s Jingle Jamboree and Luigi’s Joy to the Whirl, with holiday tunes playing on those Cars Land attractions. Cars Land continues to get the bulk of DCA's holiday displays again this year, along with the Santa's Holiday Visit at Redwood Creek Challenge Trail.

And at night, World of Color - Season of Light offers a special holiday edition of California Adventure's nighttime spectacular. 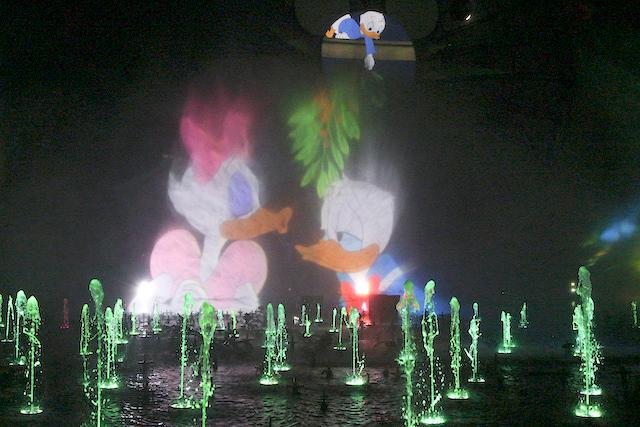 But the biggest event at Disney California Adventure remains Festival of the Holidays, which welcomes all the winter-time celebrations, including Christmas, Navidad, Hanukkah, Diwali, Kwanzaa, and Three Kings Day. Performances occur multiple times daily on the stages in Paradise Gardens, Paradise Park, and Hollywood Land. ¡Viva Navidad! takes over the Paradise Gardens, and eight festival marketplaces offer food at locations throughout Paradise Park, as well.

I tried one of the new food items for this year, a Reimagined Beef Wellington [$8.50] from A Twist on Tradition. 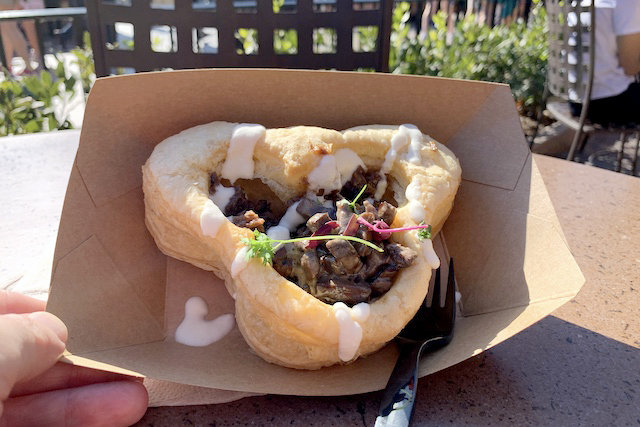 The obvious gimmick here is the Mickey head puff, encasing the diced steak and mushrooms. It's pleasant enough, but not nearly as good - or as a good a value - as the Filet across the country in the Canada pavilion at the Epcot International Food & Wine Festival. 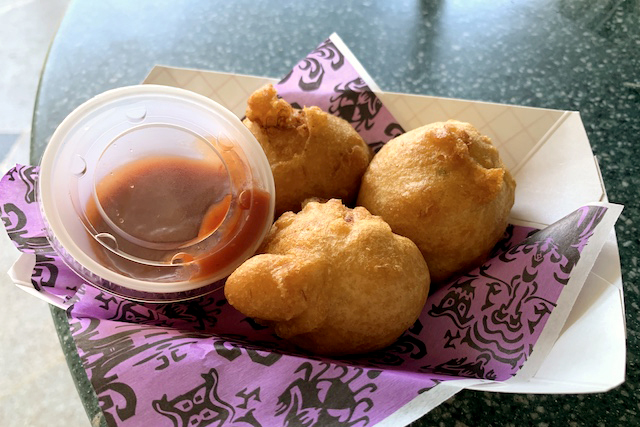 Filled with cream cheese and herbs, these better would be called Crab Fondue Fritters. But what's not to like about crab fondue you can carry in your hand because it's encased in a crisp and airy batter shell?

Let's look at some of the other holiday sweets and treats available throughout the resort this year.

Before you go: For discount tickets to Disneyland and Disney California Adventure, visit our officially authorized Disneyland tickets page.

I hope that Disney doesn't miss the opportunity to have Chewbacca wander around Galaxy's Edge in red Life-Day robes for the month of December.

Being an east coaster, how long does it take to put the holiday overlays on hm and small world?