On the Lower Lot, Super Nintendo World construction continues to expand... both up and out. 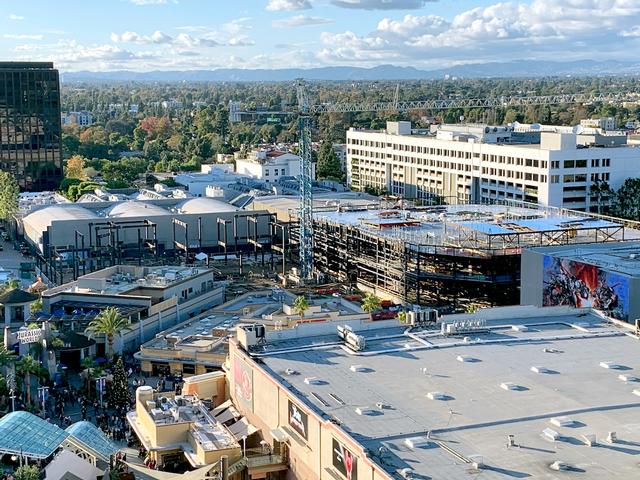 The future home of America's first Mario Kart Ride will be massive, having consumed former soundstages and backstage areas on the Lower Lot. 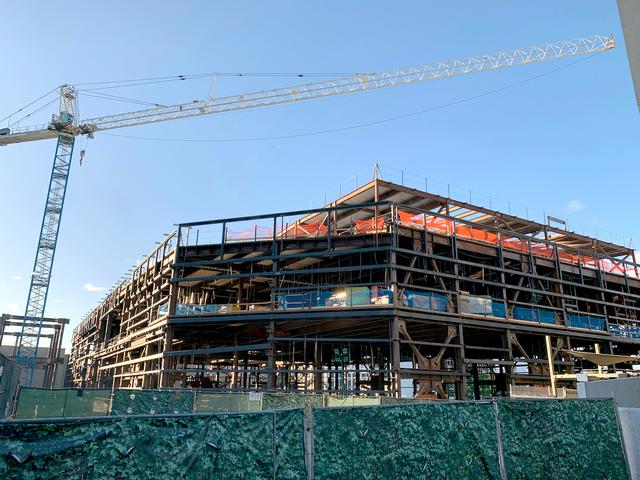 Meanwhile, Universal Studios Japan this week released a new concept image for its installation of Super Nintendo World, which is on track to open sometime before the Tokyo Olympics this summer. 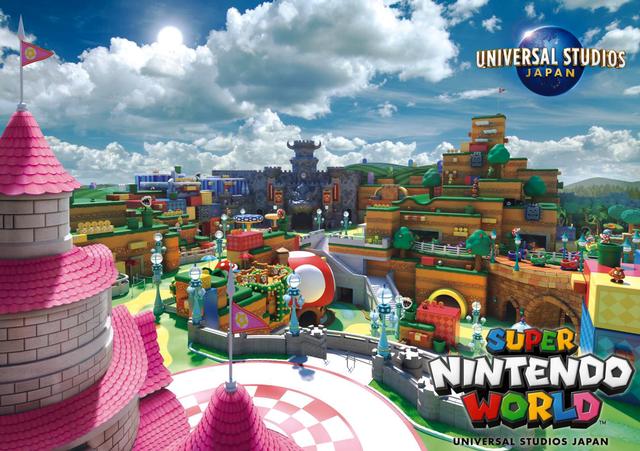 The new image more clearly shows Peach's Castle and Bowser's Castle in this version of the land, which will include both the Mario Kart ride and a Yoshi ride.

Back in Hollywood, let's head back to the Upper Lot for a look at The Secret Life of Pets: Off the Leash! 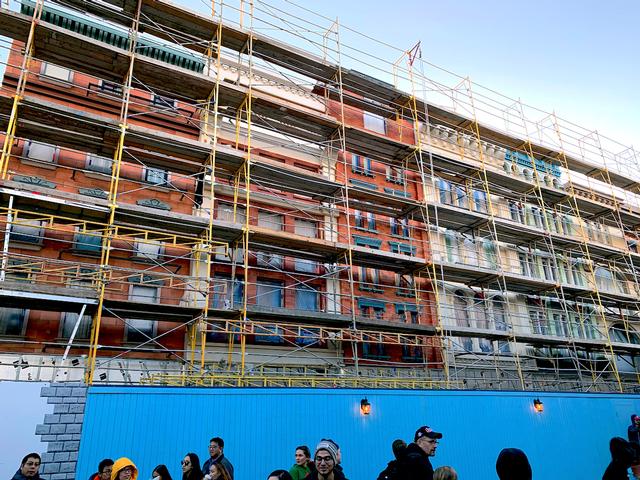 This new dark ride replaces the Globe Theatre building, which Universal demolished to make room for this full city block of New York apartments. The facade detail emerging from behind the scaffolding looks quite impressive. 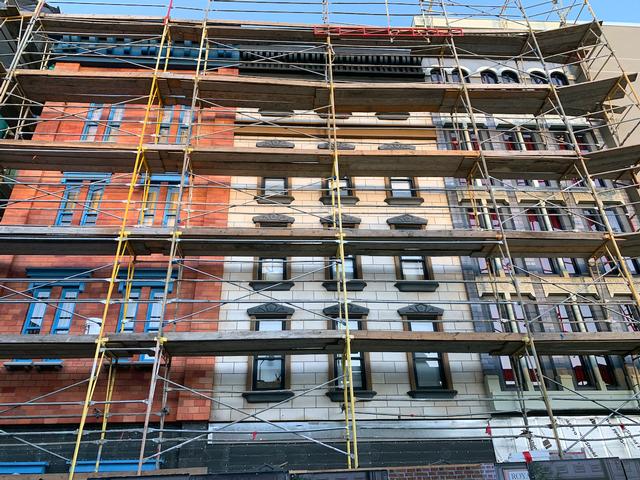 The Secret Life of Pets ride is tipped to open next year, while Universal still hasn't given us a date, or even a formal announcement, for Super Nintendo World. So, as always, stay tuned.

What's under construction at Disney, Universal and other top theme parks

Mario Kart is going to have an epic challenge working. Believe me, Nintendo fans take that game seriously so a live version is going to an epic trying to replicate its wild races.

Whilst any new cutting-edge attraction is to be welcomed (and I assume Mario Karts is going to be as cutting edge as they come) I wonder how many people are like me in that we have not the slightest interest in, or connection to, the world of Nintendo. I've never played video games, never embraced the video game culture so don't even know what the references are. I wasn't a fan of Harry Potter but when I visit the Wizarding Worlds I find a lot to appeal - gorgeous buildings, fantastic detailing. The same will be true in the Land of Avatar or Star Wars: Galaxy's Edge - regardless of the interest in the IP the lands themselves look amazing. But from what I see of the Nintendo Worlds they look (presumably) very much like the video games - which frankly look like cheap cartoons.

I'm willing to bet that I'm in a minority (especially on a forum like this) but is Nintendo going to have the broad appeal of, say, Harry Potter or Star Wars, however impressive the actual attractions are?

It's funny that David Brown has the same concern as myself, except I am confident in the appeal of Nintendo, especially for families, where-as I am less sure that Secret Life of Pets will have any lasting appeal as a ride.

In regards to Nintendo, I played Mario as a kid on my old N.E.S. game system (actually, if you want to be technical, we first met with Donkey Kong on my ColecoVision). Now my boys play the latest version of Mario on their Nintendo Switch. There is some real multi-generational appeal to that property. The designs might be cartoonish, but if the detail is there, it will be a huge draw for millions to have an opportunity to walk through that imaginary world.

However, I'm not sure that I see any long term appeal of Secret Life of Pets. I fully acknowledge that Quality-of-ride/land is always the determining factor above the overall influence of the Intellectual Property, but...Secret Life of Pets? I know I saw the first one, but I can't really remember any of it. There was a funny, crazy rabbit living in a sewer if I recall correctly. I don't think my kids have ever mentioned it. It's sequel made half the money of the first one (according to a quick google search). Is there really going to be any long lasting desire to spend time with those characters?

However, as I often point out myself, you haven't been able to even see Song of the South since 1982, yet it is the basis for one of Disney's best rides. So I guess a ride's success can rise above its origins.

I think a themed land or attraction from a know ip can delight everyone who doesn't know the ip. You don't know what it is and take it for what it is. If it's good it's good.
When you love an ip the theme park has a harder job to meet your expectations. In that regard I hate Galaxy Edge but love Harry Potter (personal preferences and taste will very from yours).

Nintendo goes back a long time and had many popular handhelds and consoles. Game characters like Mario, Luigi and Donkey Kong are will known world wide. The Wii also attracted a huge popularity at non gamers. Nintendo game visuals have the innocents of the old Disney movies but don't let that fool you because the game-play can be very deep. Thing is that a Nintendo game scales very well so kids and adults are able to play and enjoy them. The fact Nintendo is fully involved with this theme park expansion gives me the confidence this is going to be as good and popular as Potter. Even more so because these rides can be enjoyed by the whole family. There is 1 coaster going to be build in Orlando but the rest of the ride is perfect for everyone and best of all, almost no screens.
Also the true Nintendo gamer is spending on ton of money on that brand. I am positive many will visit a Universal theme park for the first time in their life just to visit this land (if it's any good).

I didn’t like the first Secret Life of Pets but it grossed almost $900 million worldwide so I can see why Universal wanted it to get into the parks. That’s more than either Guardians of the Galaxy movies which are getting a $100 million plus roller coaster at Epcot.

>> I wonder how many people are like me in that we have not the slightest interest in, or connection to, the world of Nintendo.

We've got an IP that has existed for, give or take about 40 years when then the attractions open, and is still amazingly popular with kids worldwide today. Its an IP that not only do kids enjoy, but their parents are familiar with and perhaps grew up with too (and perhaps still enjoy!). There's 41 Million Switch consoles in the wild, 75 Million 3DSes and even more Wiis and DSes. Some of these could have been onsold second hand touching even more; and older generation consoles have similar sales numbers.

If you were looking for a solid multi-generation IP to build a park world around, I'd struggle to think of a better one.

"I wonder how many people are like me in that we have not the slightest interest in, or connection to, the world of Nintendo."

Nintendo has 3-4 generations of people who have played their main line games, and the consumer base for their products are huge. It's not really a question of is there demand for the brand, cause there most certainly is, it's a matter of how this project is executed.

No one knows yet how these two projects will turn out... but I will betcha that these projects are the reasons why Disney green-lit adding Mickey and Minnie's Runaway Railway to Disneyland and the Wakanda ride to Disney California Adventure.

Disney knows that its Spider-Man Ninjago ride won't be enough to compete with what USH is adding, so it's stepping up with more. If Disney believes these projects will be impressive, that encourages me.

It doesnt appear that Donkey Kong and Zelda are still part of this project. Thats probably a good thing as Id much rather have multiple separate Super Nintendo lands each with their own unique theme within the Nintendo IP (DK, Zelda, Pokemon etc) instead of one land with 3 half baked concepts squeezed in. Universal already pioneered this concept with the Wizarding World so Im hoping the same will apply here. This is what Disney should have done and still can do with Star Wars, different lands based on the different trilogies.

As Chad H and Court E pointed out, Nintendo has a multi-generational appeal, and I would argue that it's greater than any other IP that has gone into parks to date. It's as popular today (or even more so) than it was several decades ago. I've never really been into gaming and am a fan of Star Wars and Harry Potter, but I think the Nintendo lands will be fun and not take themselves too seriously. And that will appeal to a lot of people. I've played MarioKart with my kids, and it's a blast. Most Nintendo properties are like it. Nothing violent or complex, just silly and fun. Most people will appreciate that.

As far as Secret Life of Pets goes, no they weren't great movies, but the first one had box office success. Plus, it's a single ride, not an entire land. If it's a cute, indoor, dark ride that's (rumored) to be about saving dogs and cats and other pets, it will do well and continue to help Universal appeal to a younger audience.

Now if Disney wants to combat all this, all they need to do is add a simple, interactive, indoor kids' show to Galaxy's Edge: Baby Yoda's Dance Party. Then it's game over, man. Game over.

Was just here last night. Universal Studios Hollywood is really lacking diversity in their attractions. Our family loves theme parks, but even my kids were bored towards the end of the day and I had to force them to stick around to see the Hogwarts light show. Almost every attaction here is not much more than sitting you in front of a movie screen and shaking your seat around(and don't forget squirting a bit of water in your face). It's cool for a couple attractions, but over and over again....it's a bit grating. Even the backstage tour now has two 3-D movies you need to sit through(while they jiggle the tram a bit).Thank god for The Mummy, Jurrasic World, and Waterworld. Sounds like the new Pets ride will again include movie screens. I know they are limited in space, but there are many great attractions in the world opperating in tight quarters. Universal has really transformed into a once every 3 or 4 year park for us.

@munch Wait, everything I've read from insiders about the SLOP ride is that it's going to be an animatronic-heavy omni-mover dark ride, not screen dependent at all.

The Grinch and Harry Potter welcome Christmas at Universal