This Premier Rides coaster features two tracks that are actually one, twisting in a Mobius strip design just like the Magic Mountain's Twisted Colossus. That means you get two laps around the track in the park's new "Underground" section, which also now houses Apocalypse as well as West Coast Racers.

Three trains run on the track. In between laps, your train slides into a "pit stop," parallel to the load station where the other two trains are unloading and loading. The pit stop needs some decorative work, which is one reason why Six Flags prohibited us from recording any on-ride video today. But off-ride views show the nonstop action that West Coast Racers delivers.

The ride starts innocently enough, with a slow roll out of the station to meet the car from the pit stop. Then the initial launch doesn't smack you in the mouth the way that many other launch coasters do. But the acceleration builds with the launch continuing up the hill and pushing you into a high five element that delivers a sharp ejector airtime moment.

Watching from the street, none of these hills will intimidate anyone. The maximum height on West Coast Racers measures just 67 feet. In fact, the top speed here is a Sammy-Hagar-rage-inducing 55 mph. West Coast Racers ain't the Indy 500. This is a street race. You're not setting records around a superspeedway here. You're drifting through the intersections of Los Angeles. It's nonstop action as you slam from one turn, one twist, and one dip into the next, seemingly testing the limits of the soft, over-the-shoulder "seat belt" restraints that keep you from flying out of the car. (The lap bar's actually doing more of that work, though.)

Like Steve McQueen roaring through San Francisco in Bullitt, it's all about the airtime on West Coast Racers. The ejector on the high five shocked everyone on my first ride, and we didn't get a chance to breathe until the pit stop. Even what looks like a pause after the initial airtime sequence, a ground-level segment lightly decorated to look like the LA River, delivers the ride's second (and fourth, on the second lap) launch, a nice little kick in the pants that sends you flying into the ride's spaghetti bowl — another mess of hangtime and airtime moments with a surprising headchopper element on the first lap. 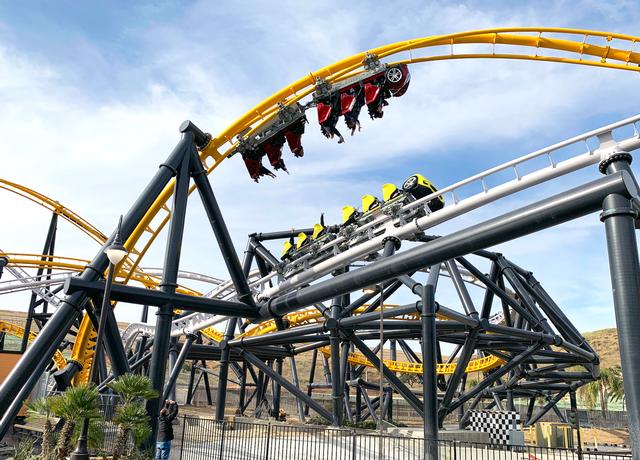 That first lap actually left me hoping that Six Flags doesn't get too slick with its operations on West Coast Racers. The time you spend in the pit stop equals the time it takes the ops team to prep the next train for dispatch. At peak capacity, the ops team at load will start unloading a train as soon as it returns to their station. Then the ops team will have reloaded that train during your first lap, so that it is ready to dispatch as soon as you hit the pit stop, allowing you to get through it faster than the Red Bull F1 team.

While the thrills here are not extreme, given the ride’s limited specs, I needed a breather today after the chaos of that first run. For a ride that looks like the compact, junior version of Twisted Colossus, West Coast Racers might actually be the most efficient coaster in America in terms of thrills per second. I don't know that I could take a flying run through both laps without pause — at least if I didn't want to stagger off the ride like someone in desperate need of a DUI attorney.

West Coast Racers is open to Six Flags members at Gold level and above today and tomorrow, opening to all season passholders and members on Monday and through January 4. (Update: This is a change from the original schedule.) West Coast Racers then will open to the public on January 9, 2020. We will be back for the media day then, bringing you on-ride video and more analysis.

I've given this park a lot of crap over the years but I have to give credit where it's due, this does look like a nice addition that was perfectly placed in an area of the park that badly needed renovations. Also they made a nice long ride and didn't cheapen out.

Haven't been to SFMM since spring 2012, its always been one of my least favorite parks, but over the past decade they have had a good strategy in regards to fixing up what needed to be fixed. No idea what it's like now in terms of maintenance and operations but I do like what they've done to the park in regards to additions.

I guess better late than never. As with virtually every coaster at SFMM, the appeal will always come down to how well they can move people through the line. With identical trains to Full Throttle, this coaster will have similar capacity issues and tight quarters getting guests in and of the train quickly and efficiently. If trains are being held in the "pit" are while another train is loaded, it's going to slow things down even more. Much like Twisted Colossus, I expect them to quickly abandon the racing/dueling features on the coaster as the park will give up allocating sufficient resources to keep train stacking to a minimum.

It's pretty fun actually! I was a little disappointed when it was announced because it seemed a bit pointless or redundant, but it's quick and fun. Much respect to all the employees but the long-held tradition of utter chaos and disorganization of loading/unloading rides at SFMM is going to make this another slow mover. Also placing my bet now that SF will outdo themselves and go down to mostly single-train operation after one year instead of two. You love to see it!

Most of the reviews I've been hearing about this coaster say it's in the park's top five, which is a little higher than I expected it would land. While certainly not an extreme ride, it does look like a fun coaster that would slip right into the roll of a family thrill coaster if not for the 54" height restriction. I'm hoping to go ride it myself in the next week or two and am looking forward to seeing how it is for myself.

I know SFMM gets a lot of flack from enthusiasts, but I've got to be honest: Based on what Disney appears to have planned, SFMM's likely got a better superhero ride than Disney will next year, and it appears they've now got a better Fast and Furious ride than what Universal came up with.

I'm quite concerned about capacity. I was there for Season Pass holder's "Technical Rehearsal," and they were dispatching one train with twelve riders about every 120 seconds...for a massive hourly capacity of about 360. Whoever designed the load/unload station -- ummm, have you ever done this before? Load and unload at the same spot, both on the right side of the train. Maybe it was operator error, but the gates consistently opened for the oncoming riders long before departing riders were clear. They should at least off-load one train while loading another, but the station is far too small for that. In the summer, when this ride is open to everyone, I'd expect 90 minute waits at a minimum. It's not a bad ride, two segments of about 35 seconds each, separated by more than 1.5 minutes of "pit stop." Yes, "Technical Rehearsal" is just that, but based upon design of the station, I'd bet absolute maximum capacity for this ride will be 600 per hour, and that's being remarkably optimistic.

Who's visiting theme parks for this holiday season?

All aboard the 2020 Hype Train for Iron Gwazi