January 6, 2020, 10:15 AM · We're down to the final three categories in this year's Theme Park Insider Awards, with today's honor going to our readers' pick as the Best New Attraction of the past year. And to the surprise of probably no one who's been reading the site for the past month or so, it's Star Wars: Rise of the Resistance. 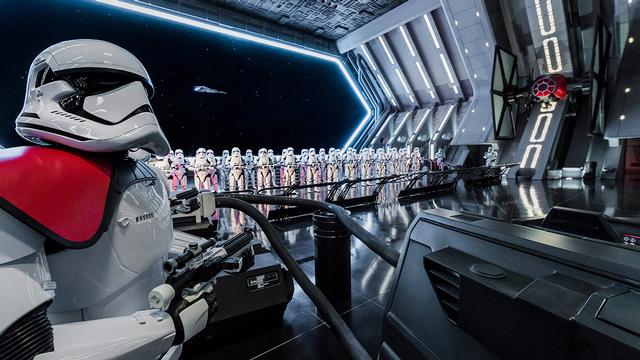 Disney's latest masterpiece blends four ride systems with animatronics and live actors to create the most immersive themed experience of the year. It's nonstop action in every direction, enticing you to want to come back again and again to try to see everything Rise of the Resistance is throwing at you.

Our honorable mention in this category is Hagrid's Magical Creatures Motorbike Adventure, which also won yesterday's award for Best New Roller Coaster. Like Hagrid's, Rise debuted to blockbuster crowds after no previews... and suffered frequent downtimes. But unlike Hagrid's, Rise had a twin on the west coast, providing Disney with double the testing opportunities and helping Rise to overcome (mostly) its initial downtime issues.

And also unlike Hagrid's, Disney is using its "boarding groups" virtual queue system to manage the crowds that are packing Disney's Hollywood Studios each morning to experience this attraction. Late next week, on January 17, theme park fans on the west coast will get their own installation of our best new attraction of the year, when Star Wars: Rise of the Resistance opens at Disneyland.

The Theme Park Insider Awards continue tomorrow with the presentation of our award for Best Attraction... as well as our "Top 10" attractions list for the year.

For tickets to the Disney theme parks, please visit the Walt Disney World tickets and Disneyland tickets pages from our travel partner.

About Theme Park Insider: Theme Park Insider is a consumer's guide to the world's best theme park resorts, reaching more than five million unique readers via its website annually and winning multiple honors for its reporting, including from the Online Journalism Association and the Webby Awards. Winners of the Theme Park Insider Awards are those locations that received the highest average reader rating, with a minimum number of votes, in their categories over the past year.

A well-deserved win for Disney and their creative team. Amazing ride -- well done.

Hooray for RotR! It should double up on the awards this year - Best New Attraction and Best Attraction. The West Coasters are going to love it.
I do prefer the back of the transport with much to see out the rear window.
Congratulations Imagineering!

No shock here as the videos of this ride are astounding and incredible how it sucks you into the experience so well. This is just a mind-blowing achievement by Disney that even Universal buffs have to champion.

So, will Rise win next year as well as it's going to be a 'new' theme park attraction based in CA?, or, as it's a clone, that will make it ineligible for the 2020 award?

I'm glad for Disney for this win. They were getting so much negative press following the openings of Galaxy's Edge, with reports of empty parks and a failed expansion - despite what looked like an amazing effort to bring something new to its guests. There were several factors, some of them corporate Disney's own fault, that resulted in lack-luster attendance this past summer. But the Land/franchise was the one taking blame, when it really wasn't the fault of what the Imagineers put out there. Now that this flagship ride has finally opened, all of those complaints (in Florida, anyway) have all gone away, and I expect the same to be true in California. Glad to see it. Looking forward to visiting, once those crowds finally die down.

Considering 90+% of the reviews I've read of Rise of the Resistance dub it the greatest theme park attraction Disney has ever built, I'm not surprised by this win. I'm really looking forward to experiencing this one myself at Disneyland later in January.

We've long had a "no clone" rule for Best New Attraction, so, no, Rise can't win again.

OK, that's good news .... thanks for the clarification Robert.

@B Goodwin .... one of our "quieter windows" opens up tomorrow, for a couple of weeks anyway !! Although it's the marathon weekend upcoming, so next week will be better. DHS is back to 8am opening next week as well, so I may go back and give it another try.

When I first heard about how this ride would work, I was excited because it sounded like the former Star Trek Experience in Las Vegas, which IMO upped the immersion experience in theme park attractions.

I'm not positive how they did it, but I think you are in a small room with the doors, then the walls go up to reveal the transporter pad. Even the floor is different, but I think with different lighting.

There are live crew members on the ship, and you are escorted to the fully staffed bridge, where Commander Riker on the view screen tells you that one in your party is an ancestor of Captain Picard, which the enemy wants to kill.

You are then escorted to an elevator, when the ship is attacked and the elevator shakes, then you go to the shuttle bay to board a shuttle (simulator like Star Tours) to escape. The simulator even flies through and lands in Las Vegas! This attraction was awesome, and I see that Rise of the Resistance drew inspiration from it.

@Disfan: One of my favorite bits on videos is when folks gush on Kylo Ren's lightsaber cutting through the ceiling and "how'd they do that?" Turns out just a light beam on a rotating disc. Fun how the old methods still work great.

Also, they did shift the Star Trek one to now an attack by the Borg with cool mix of effects and actors. Still amazing how Disney pulled this one off.

I didn't get to see the Borg attraction, but my understanding was that it was a separate theater type attraction. Disney definitely took the Star Trek experience and multiplied the awesome factor, but it is interesting to see how they drew inspiration from it. Rounding out the experience was Quark's Bar, which was like the Star Wars cantina.