January 13, 2020, 6:04 PM · Walt Disney World today previewed more of the new attractions that will be available at Epcot starting later this week.

We got a first look at the new Beauty and the Beast Sing Along last month during another Disney press event. Our correspondent at the preview today called it an inventive mix of the original animation and plenty of new bits, including new narration from Angela Lansbury, that make it an enjoyable stand-alone film. Plus, you get to sing in public, to the delight or torment of those around you.

Beauty and the Beast Sing-Along starts Friday and will play during the day while Impressions de France returns in the evenings. The specific hours for each show are 11am-7pm for Beauty and the Beast and 7:30pm-9pm for Impressions de France, which is now projected in 4K. The lobby of the France pavilion's theater is now presenting "Tales as Old as Time: French Storytelling on Stage and Screen," with displays of artwork and costumes from French theater, cinema, ballet and opera, some of which are on loan from Opera Orlando. 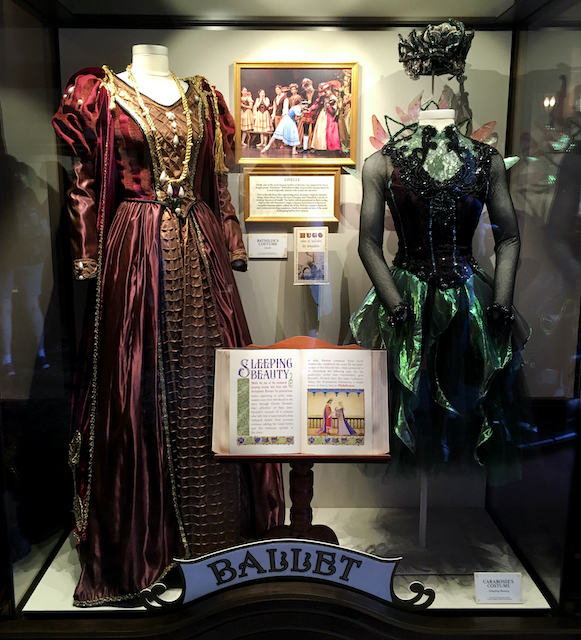 Today, Disney also previewed the new Canada Far and Wide in Circle-Vision 360 film that also opens Friday. The new production stars Second City legends Catharine O'Hara and Eugene Levy and kicks off with amazing views of the Chateau Frontenac in Quebec City. Celine Dion returns for her rendition of "O Canada," in addition to a new musical score by Canadian composer Andrew Lockington. The movie takes full advantage of its 360-degrees projection to deliver a compelling geography lesson that might inspire many Epcot visitors to think about a trip to Canada in real life.

The third new movie at Epcot, Awesome Planet from The Land pavilion, was not ready to see today, but should be running by Friday, according to Disney.

Friday also marks the start of the annual Epcot International Festival of the Arts. Today, invited media sampled a few of the treats available at the Food Studios located around the park. The visual highlight was the Rose Panna Cotta from Masterpiece Kitchen, which begs to be posted to fans' social media. 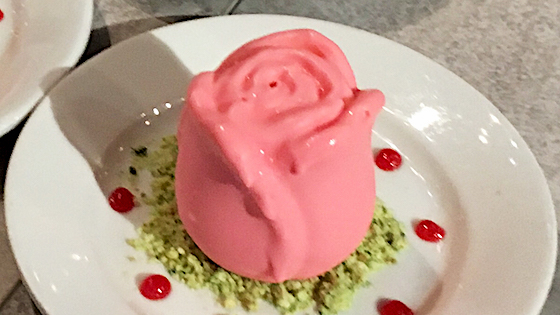 It's a bit unwieldy to eat, though, and quite sweet. You can find a complete menu from the Food Studios on Disney's website.

More impressive was the live musical entertainment that visitors will find three times daily at the America Gardens Theatre, featuring Disney on Broadway performers. Here is the complete schedule:

If you want to avoid the wait and get a reserved seat, Disney on Broadway Dining Packages are available for Biergarten Restaurant, Rose & Crown Dining Room, Coral Reef Restaurant, and Garden Grill Restaurant. Call +1-407-WDW-FEST or follow the link to reserve.

And you don't have to just watch. If you want to participate in creating art, there are many varied opportunities such as making “Handimals,” an interactive experience presented by Kaman’s Art Shoppes. The artist uses the guest’s handprint and creates an illustration around it for a unique gift to take home.

The Epcot International Festival of the Arts runs through February 24 at Walt Disney World.

So much for Impressions rotating with the sing along. Seriously, no one will be there during those times because they’ll either be eating dinner or getting ready for the fireworks.

Enjoy Impressions while it lasts folks. Disney is doing everything in their power to justify closing it some day.

I'm incredibly disappointed that Impressions is not rotating. I can understand that the original film is more appealing to adults, while Beauty and the Beast is more targeted at the kiddos, but to split the showings like this is pathetic. The least they could do is alternate them for the first few months to see how crowds reacted and then make adjustments as they gathered data regarding the popularity of the two different presentations.

They might as well just can Impressions altogether since so few will seek out the film during the 90 minutes prior to EPCOT Forever/HarmonioUS. The writing is clearly on the wall for one of the last remaining original EPCOT Center attractions.

I'm in agreement that Impressions shouldn't be limited to that late in the evening. If you are a fan of the film, your only choice is to attend Epcot in the evening. A better fit would have been to alternate every hour or two hours. I am assuming there must be some technical reasons for this schedule.

I suspect the IDF schedule is temporary. No big deal.

What makes you suspect that TH?

I was disappointed at first with the scheduling of Impressions, but as a former operator, I kind of see their logic. First, the Sing-A-Long is new, so based on that virtue along, more people will be drawn to it, so they will want to give it lots of availability during the daytime. Second, People are pretty stupid when it comes to showtimes. If you were to tell the GP Beauty and the Beast will have shows at the top of each hour and Impressions of France will run at the bottom of each hour that would go in and out of people's head like sand through a sieve. By dividing the shows into AM and PM showings, it will make it a lot easier for people to know when to go to what.
Very sadly, I too estimate our beloved Impressions is on its last leg. So sad, because it is such a great film.
I really wish there was some way to convenience the folks over at Disney+ to add content showing retired attraction media. Y'all know there has to be archival footage of every single show, ride, parade and nighttime spectacular in the vaults. Sure, the super-wide and 360 films are going to be nearly impossible to translate to a single TV screen, but I'm still willing to see these things in whatever form they give them to me.

As much as I like Impressions de France its in no way represenative of how modern France actually is lol. So I think it's long overdue for a replacement.

Now replacing it with Beauty and the Beast sing along...that I think is a bit over the top. And since its Disney it'll probably be a temporary stop gap that will be there 10+ years.

Why can the Canadian pavillion not have a log flume ride? 360 movies are fine and all, but it is a country full of wilderness, rivers, wildlife, mines, waterfalls, and would lend itself wonderfully to a water ride - and could be a rather easy-to-design thrill attraction on the West side of World Showcase (okay, I know we're getting the culinary rat ride in the France pavilion, but I still think a log flume with a great drop would be perfect in that location).

@ B Goodwin, are you concerned that EPCOT is not getting enough new enhancements, entertainment, restaurants and attractions?

Wait! Let me rephrase that question.

@ B Goodwin, are you SERIOUSLY concerned that EPCOT is not getting enough new enhancements, entertainment, restaurants and attractions?

@B Goodwin - There was a rumored log flume style ride for the Canada pavilion back when EPCOT first opened. However, Disney at the time wanted to differentiate EPCOT from MK, and thrill rides were never considered as part of an EPCOT guest's experience when the park was in its infancy (the long-rumored Mt. Fuji coaster would fall into this as well).

Now that Disney has thrown out some of the original principles constraining EPCOT by adding IP and more thrilling attractions, revisiting some of these original concepts makes sense. However, FutureWorld definitely needed the most help, so Disney rightfully is committing the most resources to improving the front of the park. I don't think some of these World Showcase thrill ride concepts are necessarily off the table, but considering how much effort they're putting into FutureWorld, it's unreasonable to expect Disney to also do a full renovation of World Showcase any time soon. Enjoy what will be the worlds largest indoor roller coaster when it opens in 2021. The fact that Disney will hold a roller coaster record (and that coaster will be in EPCOT of all places) is a feat in and of itself.

In response to the_man, a truer representation of France would be a film about the weekly demonstrations and riots in Paris, raging since November 18. Keep the original. Far more idyllic.

Very disappointed as well in the Impressions of France schedule. Disney has been increasingly adding branding to all their attractions and making the park a little too much targeted at kids. Disney also is doing this because it wants to advertise their own products in the park as much as possible that it wants to sell. That's why Maelstrom was replaced with Frozen etc. Some of it works and some of it doesn't. In my opinion a beauty and beast sing a long doesn't appeal to most adults and rotating the two shows was a great plan that would please everyone. However Disney decided to instead schedule only playing impressions of France the last 2 hours where there will only be about 4 showings each day. I hope this is temporary and Disney fixes this schedule.