February 25, 2020, 5:46 PM · Ever since last summer's D23 Expo in Anaheim, Disney fans have been asking when the company would announce something about that big Spaceship Earth refurb it promised.

Then-Disney Parks chairman Bob Chapek (now Disney CEO) promised a new narration, host and scenes for Epcot's centerpiece, but the weeks following the event brought no news about a starting date for the transformation.

Until now. Today, Walt Disney World announced that Spaceship Earth will close on May 26 to begin its transformation. Disney also dropped its first concept art for the new show, depicting "an Egypt like you’ve never seen before, transformed through the power of light." 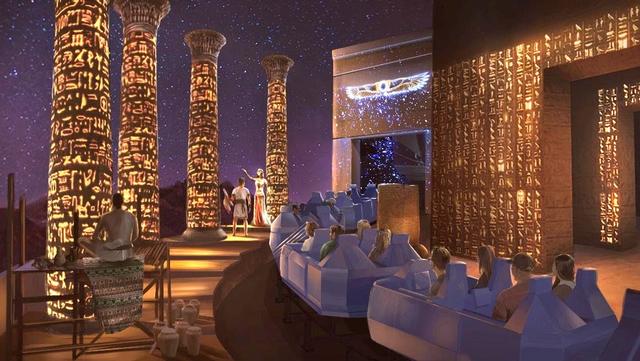 However long it takes, Disney is promising a substantial change to the attraction. "Many of the moments you know and love will be updated in amazing ways, blended with brand-new scenes to tell a story about our human experience," it said in a press release.

This will be the fourth version of Spaceship Earth when it opens. (And each one has gotten worse, so here's hoping that Disney finds its way to reverse that trend.)

Looking at the new concept art education went even further out of the windows and is replaced with kitsch.

I still miss classic Spaceship Earth which had so much done right, they didn't need to mix it up more just for flash.

So it sounds like they're going to spruce this up with a bunch of projection mapping, but leave most of the scenes unchanged - using the projections to alter the feel and focus of each scene. Sounds like a reasonable renovation for an iconic attraction, but perhaps not the full gutting that was alluded to when this was initially announced.

I never cared for the little televisions on the ride vehicles that showed half of your face stuck on a cartoon future, towards the end of the ride. Cute gimmick, but not much more than that.

Hope this new version will make the ride even more enjoyable. I like the notion of "storytelling" as the theme, but I also think the greater scope of "communication" was more profound and befitting Epcot's central messaging.

However, as it has been shown over-and-over again in Epcot, it's tough to be timeless when the future keeps catching up to your ride scenes.

Unfortunately, I'm visiting next February, and it probably won't be ready by then to judge for myself.

One of the most iconic theme park attractions in the world is going to get even better. Thumbs up from the Plums.

This ride has an opportunity to be a top tier attraction with some upgrades to some of the Animatronics. I hope they don't rely solely on projection mapping. New tracks and a new entry point should allow some additional pluses. That Chariot scene in Ancient Rome can benefit from new special effects.

The animatronics would show it has moved past it's nostalgic 80's co-dependence that has weighed the previous iterations down.

Bob Chapek takes over as CEO at Disney