With Abyssus, Energylandia adds to an impressive coaster line-up

March 10, 2020, 4:41 PM · Our focus here at Theme Park Insider long has been on the world's most popular theme parks. People most like reading about the parks that people are most likely to visit, after all. But I've also long considered it part of my responsibility running the site to guide people's attention to worthy parks around the world that don't show up on the TEA/AECOM Theme Index attendance lists — parks such as Holiday World and Silver Dollar City, the Legoland theme parks, and Warner Bros. World and Ferrari World in Abu Dhabi.

One more lesser-visited park that has been drawing my attention recently is Energylandia in Poland. I haven't visited the park, so don't consider this an endorsement yet — just an expression of interest. But this park is quickly building an impressive line-up of coasters.

Since its 2014 opening, Polish theme park has opened 15 coasters, including 2018's Intamin mega Hyperion and last year's RMC I-Box, Zadra - whose specs remind me of Busch Gardens' upcoming Iron Gwazi, though the Energylandia coaster was built from the ground up rather than upon the remains of a previously wooden-tracked coaster. (Zandra is 206 feet high, with three inversions, a 90-degree drop, a top speed of 75 mph, and 4,318 feet of track.)

Now for 2020, the park is building Abyssus, a dual-launched Vekoma Shockwave with a height of 126 feet and a top speed of 62 mph. The €11 million coaster anchors the park's Aqualantis land. 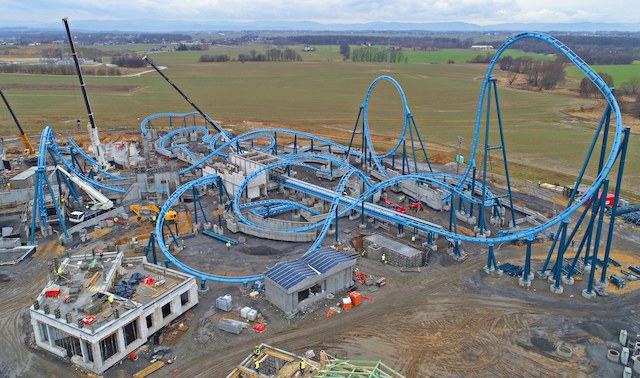 Here's a promo video from the park, which includes concept and construction footage. (Be advised that it's in Polish.) Fitting its setting among the ruins of the mythical city of Atlantis, Abyssus will be set amid multiple water elements, which will continue throughout the new land.

I would love to hear from any Theme Park Insider readers who have visited this park in the past year or so. Is Energylandia worth including on a European theme park vacation? Please share your thoughts - or a trip report! - in the comments.

I haven't been to the park myself, but I have several friends who have journeyed to Energylandia. The general consensus seemed to be that the park as a whole was fairly mediocre, with only Formula and Zadra standing out as high quality coasters (Hyperion was said to be weaker and rougher than other Intamin hypers). Plus, although the park contains fifteen operating coasters, nine of them would be considered at best a junior coaster. The impression I got from them was that the smaller Legendia was a much better park for those in the region, but if you're doing a European coaster tour from abroad you're better off sticking to more well-known parks in Western Europe.