April 7, 2020, 9:56 PM · Over on our sister site Violinist.com right now, you can find a tribute to the late James "Jim" Christensen, a longtime music director for the Disney theme parks.

Christensen passed away on March 15 at age 84. He was the music director for Disneyland's Main Street Electrical Parade, co-composing the original orchestration for the production and also did arrangements for the "Fantasy in the Sky" fireworks. But it was his work with college musicians that inspired this tribute.

The words come from Peter Wilson, the String Section Commander for "The President's Own" U.S. Marine Band, who played in the Disney All-American College Orchestra at the Walt Disney World Resort in the summer of 1990 (as did future Violinist.com editor and Mrs. Theme Park Insider Laurie Niles). Christensen served as music director and conductor of the orchestra for nine seasons (1984-1992) at Epcot's American Gardens Theatre, "where he and his hand-picked young musicians collaborated with world-renowned artists and celebrities each summer," Peter wrote.

Peter continued, "Ultimately, those of us who had the privilege of being in Jim’s orchestras soon learned that our ability to play was only part of what he saw in us. Regardless, I knew right away how important one’s presentation was to Jim. I would soon learn what a master he was of the stage, the show, the image, and how to entertain audiences — in short, the whole package." 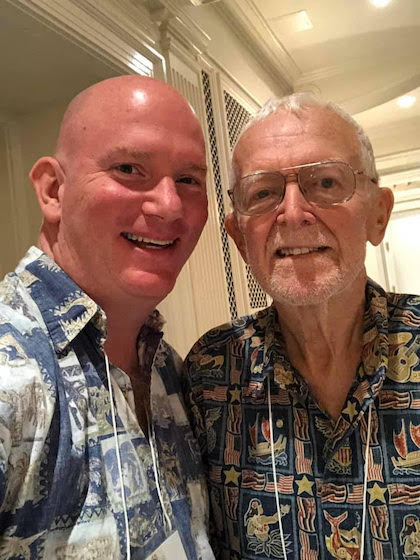 Peter Wilson and Jim Christensen in 2019

After I arrived at Walt Disney World in Orlando to join the orchestra in the summer of 1990, Jim immediately began drilling into us that we should always strive to not only give the audience what they came to see and hear, but also to exceed their expectations through exciting musical performances and by having a great time on stage. We performed three shows each night for five days (Wednesday through Sunday) and worked with some amazing, legendary musicians each week including Rosemary Clooney, Carol Lawerence, Billy Taylor, Della Reese, Maureen McGovern, Michael Feinstein, Pat Williams, Bill Conti, and Sesame Street’s Bob McGrath. Jim would stress the importance of making sure each guest artist was as happy and comfortable as possible.

That meant detailed rehearsals, maximum effort and soaking up Christensen insight into the professional music business, which has welcomed many All-American College Orchestra alumni over the years. Please visit Violinist.com to read the complete tribute.

On Stage with the Disney World All-American College Orchestra

Enjoy Some of Europe's Top Theme Parks from Home