Can Theme Parks Get on the Right Side of History?

June 11, 2020, 4:48 PM · So what do you think now about Disney changing the chase and auction scenes in Pirates of the Caribbean?

The protests that have swept across America - and now Europe - over the past two weeks have challenged many of us to take a fresh look at our assumptions as well as our view of history. Entertainment companies are not exempt for this questioning. People are challenging movies, TV shows, and even theme park attractions over their depictions of race, bigotry, and exploitation.

In its theme parks, The Walt Disney Company has been relatively proactive in getting itself on the right side of history. Pirates might provide the most famous example, but let's not forget that many fans eviscerated Disney for changing the ride's chase scene, putting platters of food in the hands of the women the pirates were running after. The fan pushback continued when Disney changed the ride's auction scene, turning the Redhead from an object of human trafficking into a pirate herself, overseeing the auction of plundered goods rather than women.

I've defended both changes and will continue to do so. In the Disneyland original, the pirates were about to meet an explosive end at the conclusion of the ride - a karmic punishment for their crimes throughout the attraction. That punishment balanced the depiction of those crimes, making them less offensive to watch. But Disney removed that ending in the Walt Disney World installation, fixed things a bit with the chase scene re-do, then compounded PotC's narrative problem by adding the Captain Jack Sparrow character to the ride after the movies based on the attraction became a hit. Since the pirates now were heroes, the ride's original condemnation of human trafficking implicitly became an endorsement, so it had to go.

In 2015, Disney removed the confederate flag from its hall of flags at the entrance to The American Adventure theater in Epcot. That show from its beginning otherwise handled relatively well many of the issues other companies are catching heat for now. It addressed slavery and the genocide of Indigenous people head on, and its segment on the Civil War acknowledged its cost in human lives rather than glorifying it as some noble "lost cause," as so much revisionist history of that war has sought to do.

But all in Disney's world is not on the right side of history just yet.

Except that it isn't. Even if you ignore Song of the South, the ride's characters and narrative are based upon the "Uncle Remus" stories written down and published by Joel Chandler Harris. I say "written down" and not "written," because Harris did not create these stories. Harris got them from listening to slaves telling stories than combined African and Native American myths and folklore.

Brer Rabbit is a classic "trickster" archetype - an actor who defies convention to trick an authority figure. If you look through this context, slaves telling stories about characters who defied authority to win their escape was pretty subversive, wasn't it? This was no endorsement of the plantation system.

Yet Song of the South downplayed that subversiveness to promote a simplistic nostalgia. In attempting to make a kid-friendly movie, Disney ended up making a white supremacist-friendly one instead. That's why Disney, appropriately, has buried it. But the movie's "Zip-a-Dee-Doo-Dah" song won an Academy Award and has endured as one of Disney's most popular earworms. Disney didn't want to lose that asset, so when Tony Baxter came forward in the 1980s with the idea of a Disney-themed log flume ride, Imagineers went with this as an opportunity to reboot the characters and songs from the movie.

But Harris' version of the stories is not free from criticism. A journalist and not a novelist, Harris attempted to capture in print the patois of the slaves who told him the stories. Harris gets heat for cultural appropriation, but if he'd truly appropriated these stories into his own, white voice, he'd likely have avoided that criticism. Again, irony. Harris takes heat for trying to recreate and preserve enslaved Black people's voices.

Let's not pretend though that Harris's stories would have been nearly as popular if he'd white-washed them, though. Much of his success in publishing "Uncle Remus" came because the stories tapped into the popularity of minstrelsy. The stories endured because they appealed to racists.

It's so tempting to use the offensive "tar baby" story that Harris popularized, because once you associate with a minstrel work, it's nearly impossible now to extract yourself from it. Just ask any celebrity who's had to apologize for using blackface. (By the way, how's that Jimmy Fallon ride working out for you now, Universal?)

Disney attempted to extract "Zip-a-Dee-Doo-Dah" from Song of the South with Splash Mountain, but it's discovering that the problem with this franchise wasn't just with the tone, imagery, and narrative of that 1946 movie. Let's talk about the title of that song. "Zip-a-Dee-Doo-Dah" derives from the chorus "O Zip a duden duden duden zip a duden day" in a "Turkey in the Straw" contrafactum called... wait for it... "Zip Coon."

In its attempt to distance itself from the perceived racism of Song of the South, Disney transferred to Splash Mountain what might have been the most racist thing about that film. Whoops.

But Splash Mountain isn't close to providing the most offensive racial stereotyping in a Magic Kingdom theme park. Let's talk about Peter Pan's Flight, shall we?

There is no possible modern excuse for the visual depiction of the "Indians" in this ride. It's a racist caricature that makes me - and a whole lot of other Disney fans - deeply uncomfortable on what otherwise could be a delightful ride. If Disney wants to do better in getting on the right side of history, changing the depiction of Indigenous people in this attraction would be its best first step.

Disney is hardly the only theme park that needs to take a hard look at its depiction of Indigenous peoples.

Hey @Efteling , how about removing this extraordinarily racist ride from your park? pic.twitter.com/h0IQ0IziKl

That's the Monsieur Cannibale spinner ride at the Dutch theme park, which - I'll admit - has a really catchy theme song. So why not keep the tune, write new lyrics and install a new theme and decoration for the ride? And then Efteling will have a "new" attraction upon which anyone can feel welcome.

Efteling has shown better judgment in the past. I will take a moment to give the park props for not displaying the offensive "Black Pete" character that is otherwise ubiquitous in The Netherlands at Christmastime. 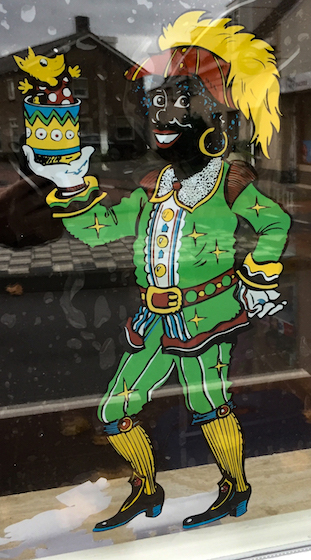 This apprentice to Santa appears in shop windows throughout the country and even inspires some Dutch people to put on full blackface to cosplay the character. So, yeah, racism is not a uniquely American problem. Not even close. But just because someone else does something offensive does not absolve you for not doing the right thing.

Efteling, Disney, and other theme parks have made many changes over the years to help a more diverse audience of fans and potential fans feel welcome. But so long as there is an opportunity to do more, getting on the right side of history requires the attempt.

This isn't "political correctness," which is a term often slung by people who have engaged in hostile speech and acts but who want to recast themselves as a victim rather than a perpetrator. It's making everyone feel welcome - which, ultimately, is theme parks' business.

Update: I tried leaving the comments open, but... well, that turned out to have been a bad idea. So I've closed them for this post. As always, be excellent to each other.

SeaWorld and Busch Gardens Are Back