SeaWorld and Busch Gardens Are Back

The other half reopen next month with the return of the four Walt Disney World parks. For now though, the two SeaWorld company parks join the Universal Orlando parks, which reopened last week. Like at Universal, initial crowds at SeaWorld were just a small fraction of what would be visiting the parks at this time of year.

SeaWorld and Busch Gardens are requiring advance reservations to visit, unlike the Universal parks. But fans today estimated the crowd at only about 15 percent of a typical summer day. As SeaWorld's interim CEO suggested in an investors' call last month, maintaining safe social distancing isn't turning out to be a problem in the parks, as the combination of few visitors in a large space left plenty of room for everyone. Temperature checks and masks are mandatory, as well. (Thanks again to Theme Park Insider readers for their reports and photos.) 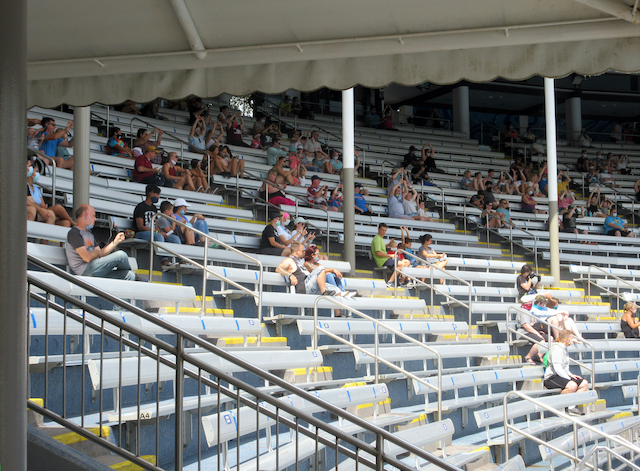 The park was spacing parties and alternating rows for the shows that were running, including Dolphin Days, Clyde and Seymour, and Orca Encounter. Pets Ahoy is not running at this time.

On rides, spacing rules were pretty much the same - alternate rows. But on Infinity Falls, each party got its own raft. 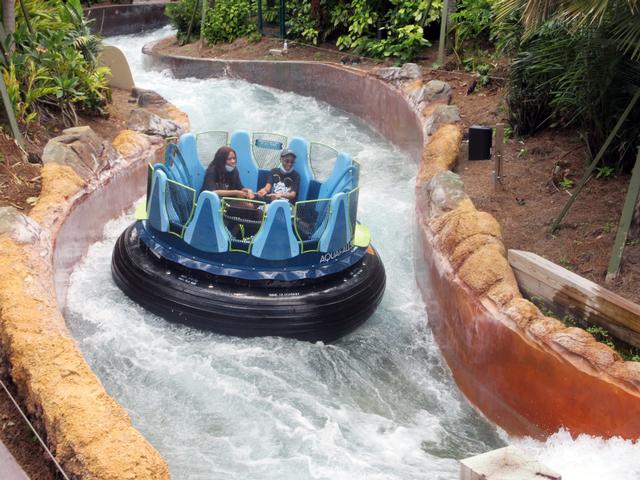 In case you were wondering, the park's new coaster, Icebreaker, is not running. No word on an opening date for that, or for Busch Gardens' Iron Gwazi, which at least was testing before the parks closed due to the virus. 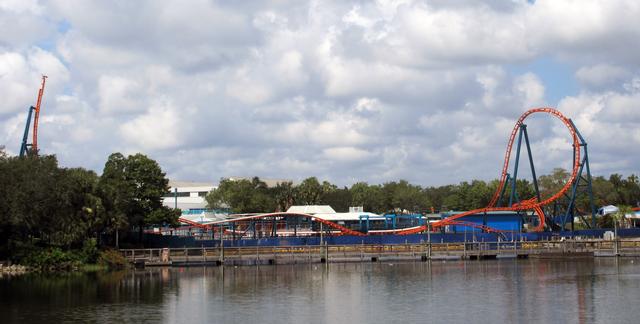 Also to help promote social distancing, SeaWorld has cleared merchandise displays from the floor of many of its stores, including Hooper's Store in Sesame Street. 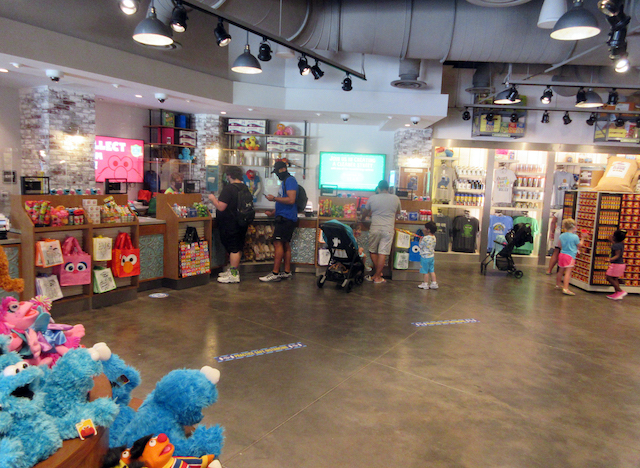 The park also is restricting access to restrooms, assigning attendants to ensure that they do not get so overcrowded that people can't keep their distance.

SeaWorld's Aquatica and Discovery Cove and Busch Gardens' Adventure Island also reopened to the public today. You can check reopening dates for other parks across the country in our post, When Will Your Favorite Theme Parks Reopen?

Would anyone happen to know why Antarctica and Journey to Atlantis are both not operating? Is it refurbishments or something else? Are they going to open up anytime soon?

I guess we're desperate for something to do, but risking your life to go to a half-functioning park seems kinda lame.

I do want one of those shark face masks.

@Manny, possibly without the addition of useable water and/or misting effects they deemed the in-show story not passable. Only a guess on my part, mind you. I’m not even sure if the SeaWorld Parks were rolling out their attractions without water elements like Universal announced it was going to. Anyone hear anything about this?

@thecolonel couldn't have said it better myself. reports from yesterday indicating there was zero enforcement of social distancing or mask wearing inside of the park.

Cowering in your home, afraid to step outside is kinda Lame!
If you're healthy with no pre-existing conditions than you are NOT risking your life!

Not going to a theme park = cowering in your home, afraid to step outside?

All depends on what one's individual risk tolerance is.

From the front page of Seaworld.com ...

Exposure to COVID-19 is an inherent risk in any public location where people are present; we cannot guarantee you will not be exposed during your visit.

No mention of a "healthy w/o pre-existing conditions" clause.

Now the rib platter at Voyagers? That might be worth the risk ;)

Is water parks riskier than theme parks? I am looking for this answer but could not find one in the internet.
Is people going to the open waterparks?

i haven't been to sea world yet, but went to universal earlier this week and thought they did a great job of enforcing masks (even announcing it must be over the mouth AND nose). they also got the social distancing word out and i felt very safe, much safer than at my local supermarket. i do wonder with the very light crowds if they are managing to even break even but as a park enthusiast, wearing a mask is worth the very short wait times (they do have areas where you can take it off if you really need a break). we spent about 5 hours there and are planning to go again this afternoon.

I have visiting Universal, Disney Springs and SeaWorld. SeaWorld made no effort to enforce social distancing and face mask wearing once inside the park beyond an announcement on the sound system. It’s was a disaster in my opinion. I left after about 1 hour. If they don’t improve their efforts they will become a hot spot of growth for the virus.

Universal and Disney Springs have done a much better job of enforcing their safety measures once inside the parks and shopping areas.

What is sad about SeaWorld’s poor effort was it will ultimately hurt them and the efforts to restart the Orlando tourist industry if our virus numbers just keep going up. It’s a very self defeating approach by them.

@Rave5: I think the only person taking masking seriously at Sea World was the PETA protestor in a dolphin costume outside the gates.

I get it, the first day so hope it improves but the fact there are social media postings of folks sitting close together sans masks is not a good look for a park already having major issues. They should get it together fast but that they weren't enforcing them on the very first day is terrible.

that is not good news to hear at all. and yes, i agree, it hurts all orlando tourism. sea world/busch had done such a great job lately turning things around at their parks. i hope they get it together on this.

@ Flavio de Souza - I don’t think there is a simple straight answer to your question. The facts are that the virus would be spread by other humans. So even in a water park the risks would be the same (being too close to other people, etc).

There is currently no evidence that being in chlorinated water with others poses a greater risk than just being outdoors with others. The current belief is that the chlorine would take away any threat of the virus in the water itself.

But of course there is still much unknown about this virus...

went to Universal again yesterday. rode all 3 major water rides. on JP, everyone kept masks on and they loaded rows 1, 3 and 5, keeping 2 and 4 empty. on popeye, we rode with another party seated across the boat from us. they took off their masks as they said they were told it was okay. then on ripsaw falls the ride ops told us we could remove our masks.

Stay safe all of those willing to give the theme parks a visit.

Florida still refuses to list hospitalizations, thus making a complete and utter joke of just how serious this is now becoming in my home state.

@Makorider: I'm lucky to live in Illinois which is the only state to meet all the criteria for reopening thanks to our governor so strident on shelter orders even against protests and legal actions. So it's still rough (libraries still closed) but better than other spots.

Florida, it's clear they've been fudging some numbers to stay open which hurts their plans and likely not alone.

Meanwhile, New Zealand did a major shutdown, stuck to it and now so okay that 20,000 people were able to be in a stadium without masks/distancing to enjoy a rugby game. Just shows how badly so many other nations botched the response.

"If you're healthy with no pre-existing conditions than you are NOT risking your life!"

For me it's not my life I'm risking. It's my older family members who are far more vulnerable that I take care of. I can't imagine I'm the only healthy young adult that is taking care of older family, or works in a field where older people are constantly present.

Can Theme Parks Get on the Right Side of History?