Book Review: Discovering the History of 'The Disney Monorail'

My first monorail memory wasn't a ride, but it was an awakening. My grandfather was carrying me back to the car in the old Disneyland parking lot at the end of the day, when the monorail came by overhead, waking me. (For reference, this would be about where the monorail passes over Buena Vista Street in Disney California Adventure today.) I looked up from my perch on my grandfather's shoulder, watched the sleek new Mark III glide past... then fell right back asleep. 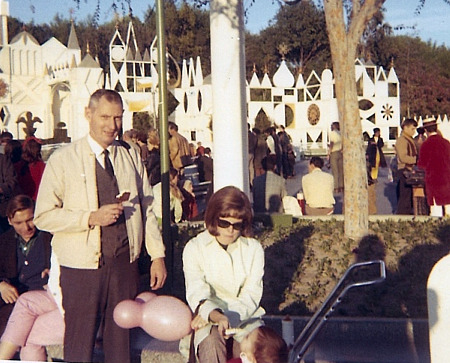 Me, in the stroller, earlier that day, with my mother and grandfather

Starting with the Mark I at Disneyland in 1959, the monorail has become an icon of the Disney theme parks, grabbing the attention of millions of guests each year at the Disneyland, Walt Disney World, and Tokyo Disney Resorts... and waking up more than a few more kids at the end of the day along the way, too. Disney Editions and D23 are honoring the monorail's legacy in a gorgeous new book, The Disney Monorail: Imagineering a Highway in the Sky [$32.99 from Amazon - affiliate link].

On almost every page of this 208-page volume you will find concept art, historical photos, and graphic art that would distinguish the walls of any Disney fan's home. It seems a shame to keep them hidden inside a book, where you can ogle no more than two pages at a time. The visual adventure starts on the dust jacket itself, whose interior reveals a 1975 concept for Epcot by production designer John DeCuir, Jr.

But the story begins with a foreword from Tricia Nixon Cox and Julie Nixon Eisenhower, who, with their father — then-Vice President Richard Nixon — helped Walt Disney dedicate the original Disneyland monorail at its June 14, 1959 debut. From the remembrance of that moment, authors Jeff Kurtti, Vanessa Hunt, and Paul Wolski step back to introduce readers to Walt's lifelong passion for transportation before diving into the history of the monorail as a transportation medium.

We don't get back to Disneyland's monorail until chapter six, on page 84. Though the Disneyland-Alweg Monorail debuted that summer as part of an expansion that also welcomed the Matterhorn, Submarines, Fantasyland Autopia, and Motor Boat Cruise to the park, Walt never intended the monorail to be just a theme park attraction. The book's careful attention to the development of monorails as transportation systems helped us to understand why Walt presented Disneyland's monorail to the Los Angeles County Board of Supervisors as a prototype urban transportation system. The supervisors dismissed the idea, to Walt's ever-lasting frustration.

Walt hoped to show the full potential of the monorail as a transportation system in his Florida Project, where monorails would help carry people around his planned Experimental Prototype Community of Tomorrow. After Walt's death in 1966, the company kept the monorail as a transportation system connecting the Magic Kingdom theme park with the resort's parking lot and two hotels. And when EPCOT became a theme park, rather than a modernist residential and commercial community, the Walt Disney World Monorail extended to serve that, too.

The book recounts the development of monorail systems at Walt Disney World and Disneyland over the years, adding details about the Tokyo Disney monorail as well as modern urban systems in Seattle, Las Vegas, Japan, and China. Want to know the differences between each of the Mark series monorails that have run in the Disney parks? The service dates for each monorail train? The Disney Monorail delivers.

Save for one tragic omission on that last detail, this could have been the definitive resource on not just the history of the Disney Monorail. But I cannot let pass the note on page 148 that monorails "Pink and Purple were retired in July 2009," which is followed immediately — and with great irony — by a passage entitled "Speed with Safety" on page 150.

The book never mentions why those two monorails were "retired." In the early morning of July 5, 2009, Monorail Pink reversed and crashed into his Monorail Purple, killing Purple's driver, 21-year-old cast member Austin Wuennenberg. The new automation system ("initiated in 2014") that book hails in that "Speed and Safety" passage was installed after the crash that took Austin's life.

For a book that strives to detail every social, historic, and engineering influence upon the Disney Monorail, ignoring the July 2009 tragedy and its influence on the Walt Disney World system mars what otherwise might have been the definitive history of this icon. Like its subject, The Disney Monorail awes and inspires with its beautiful design. But like its subject, it's also not perfect.

That will not keep fans from loving them both.

* * *
The Disney Monorail: Imagineering a Highway in the Sky is available Tuesday, September 15.

I don't remember my first ride on the monorail, but I have distinct memories of riding it in the late '70s and being in awe every time we'd go through the Contemporary and I could see the giant mural on the wall. I'd also swear that the cabins were roomier then, with less seating, so that it seemed like a more exclusive, special experience. At least to my 7-year-old self :-)

I can't believe they left the 2009 crash out of the book. That's a glaring oversight...

That’s a shocking oversight... I wonder if it was self censorship or if someone at Disney had approval over the final text.

It’s a shame Monorails have not lived up to their potential as urban transport... even MagLev hasn’t really taken off like the it should have. Instead they’re, next to roller coasters, the stereotypical theme park attraction.

Disney is the publisher, so yes, I’d say Disney had final approval over the text.

Back when I was young and poor, an afternoon adventure with my two small children would be a trip to WDW to ride the Monorail. Once around the Seven Seas Lagoon. Disembark at MK, boat ride to the Poly for ice cream. We all picked our own Monorail (the THC train is Monorail Gold). Love those rails.

My first trip on a Disney monorail was in November 1971 at WDW. It was incredibly exciting. Brand new resort, brand new monorail. The monorail track was gleaming white. It was all so perfect and beautiful!

The sleek monorail featured rows of individual seats, like on a train. The floor was carpeted. We sat and stared excitedly out the window as we zoomed toward the Magic Kingdom, the recorded narration pointing out the various sights at this awesome new and utterly amazing resort. What a great memory.

And who could forget Walt's big scissors fumble when he opened the monorail with Nixon?

The first monorail ride I remember was the one from Epcot to Magic Kingdom in 2008 at 12 years old. Although I'm sure I probably rode it as well during my first visit when I was 4.

My first memory of riding the monorail was when I was a wee youngling in the early 80’s. The engineer allowed us to ride up front with him. I felt like we were on a spaceship to the future lol :)
I remember about 9 years ago giddily taking my girlfriend (who is now my wife) to MK for the first time and trying to be so cool and get her a seat in the front of the train. Alas, they said that they no longer allowed guests to ride in the front of the train. Now I know why.

My first monorail ride was at Disneyland in the Spring of 1968.

First time was Disneyland in 1982 although a bit young to remember it fully. But '84 was the first real one to love going between MAK and EPCOT and back then, just felt the coolest thing imaginable.

A few times my family would stay at the Dolphin or another EPCOT resort...yet I'd take a bus to TTC because I just loved riding monorail into Epcot and loving it.

You just know Universal is dying to make some sort of Monorail joke for the Simpsons section but no doubt legal issues....

When Will Parades and Fireworks Return to Disney World?