Fresh Look at Disney's Galaxy of the Guardians Coaster Trains

Disney earlier had shared a sneak peek video for the coaster trains, which will pivot along the track of what Disney is calling a "story coaster," directing riders' attention to the promised visual elements on this indoor attraction. Today's image allows us to see multiple trains side by side. 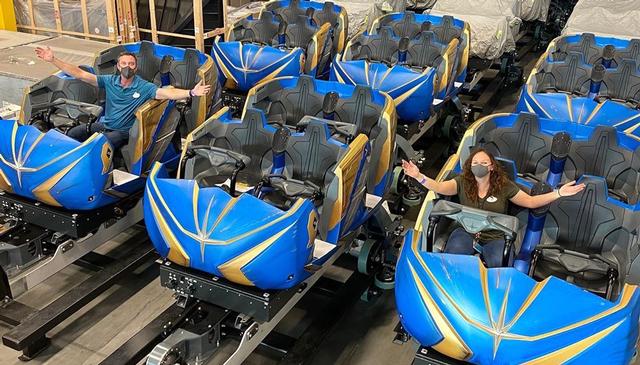 WDI says that "each one is unique with different wear patterns and impact marks. Imagineers were inspired by markings that appear on NASA Space Shuttles and other spacecraft upon reentry into Earth’s atmosphere."

Inside word is very positive on construction progress for the coaster, which is going into Epcot's old Universe of Energy building... and a massive new show building behind it. We had pegged Guardians of the Galaxy: Cosmic Rewind to open in time for Epcot's 40th anniversary on October 1, 2022, but sources suggest that the coaster could beat that deadline and might even open closer to Walt Disney World's 50th anniversary next October 1.

Disney, of course, has issued no official opening date for Guardians of the Galaxy: Cosmic Rewind or for the TRON Lightcycle Run coaster under construction in the Magic Kingdom, or even the largely complete Remy's Ratatouille Adventure in Epcot's expanded France pavilion. Stay tuned.

What sources suggest that it will open before 2022? Legal wise (or whatever wise) you don't have to state who specifically but it would be nice to hear from where. I've heard that it won't make it's 2022 opening so that's why I'm asking.

Also on a side note, have you thought about adding a "like" button on the site? A "like" button so people can like what people say in articles, comments, and the threads.

No way I'm burning sources. But I offer you my track record on such things, which I think is pretty good. Honestly, though, it's just such a crapshoot to predict construction schedules right now, given the pandemic and the crash of the tourism economy. If things get better, skeds can accelerate and stuff opens sooner. If things go south, push everything back again. In the past month or so, I think people in the industry in Florida have been feeling cautiously optimistic about 2021, but as we've seen so often over the past eight months, anything can change in an instant.

The show building is up forever. To quote Brad Pitt, “What’s in the box”?!?!

My sources are still saying spring 2021 for Ratatouille, fall 2021 for Tron, and spring 2022 for Guardians, but timelines are very fluid right now and what happens over the next couple months could definitely impact them. With Guardians as the last major attraction to open at WDW in the next five years, I'd be surprised if they moved it forward and would expect it to be moved backward if things don't improve. Whenever it arrives, it looks like we're in for a very unique ride that could dethrone Everest as the best coaster attraction Disney has done.

"Whenever it arrives, it looks like we're in for a very unique ride that could dethrone Everest as the best coaster attraction Disney has done."

Did they get rid of Big Thunder Mountain Railroad?

Yeah I figured you wouldn't be able to say, just thought I'd try. Everything's so up in the air that really anything could happen.

.... so that "like" button ehh? Im not sure about anyone else (well other than 2relax!) but I've agreed with alot of people on this site. However, it would be a bit awkward to post a comment saying "I agree with you" in the middle of a discussion. I think a like feature would bring more of a sense of community to the site. A dislike button would probably bring more division within the site (I'm so sure we all want more of that), but I see no harm in a like feature. Hope you'll consider it!

I just hope this ride is reliable and gets decent capacity - it seems all signs point to no on both. After Hagrid and Rise I don't really have the desire to deal with another new major E-Ticket causing all sorts of issues for years.

Guys and gals as far as the best Disney coaster experience built yet, my vote goes for Big Grizzly Mountain Runaway Rail Cars at Hong Kong Disneyland. It's Big Thunder Mountain with audio-animatronic bears, accelerated launches, and backwards sections. Theming is spot on and the thrill factor is just right.

This is exciting news, thank you.

Ratatouille - Springv2021
Guardians - Fall 2021
TRON - No idea. The work being completed on TRON is being done to protect in-place work.

Okay, what are rankings for favorite Disney coasters?

If were doing Disney coasters in general....

What is with all the Everest hate? In my book it’s the best combination of thrill and theming Disney has ever done on a coaster (I have yet to ride TRON). The backwards helix gives great Gs, and the drop out of the mountain has great airtime in the back. Combine that with a long ride and impeccable theming and you have a winner

Since I started the discussion on which coaster is best, I guess I should throw my list up too. I haven't visited the three Asian resorts and didn't ride every coaster in Paris, but here we go...

... AJ come on. You've gotta explain why Incredicoaster is #2.

At least for me, I didn't put EE in the spot that I did because I hate the coaster. However, while the theming is topic notch, the thrills have left something to be desired. I've seen people look at EE from the front of the mountain and turn away, so maybe for the GP it really is a thrilling coaster. I find that's just alright. Still an amazing experience that everyone should ride at least once.

Postcott, while I won't deny that the theming is pretty poor on Incredicoaster, as a pure coaster I consider it the finest Disney has crafted (at least among those I've ridden). It is thrilling, but not too extreme for typical Disney visitors, and it is a long, smooth ride. Plus, there might be a little sentimental value, as California Screamin' back in 2001 was the first launch coaster I rode. Other Disney coasters definitely have it beat in terms of theming, but if Disney's E-ticket coasters were lined up side with equal wait times Expedition Everest is probably the only one I'd ride more than Incredicoaster. I will admit that if you look at the overall attraction instead of just the ride itself Incredicoaster would lose a couple spots, but even in it's current form I'd consider it among the top five Disney coaster-style attractions in the US no matter how you look at them.

@TH: Guardians completed before Tron? With Tron being the secibd version of the ride, I would think the kinks could be ironed out quicker than in an all-new ride.

I can’t imagine Disney will want an incomplete attraction during the actual 50th anniversary in October 2021, so I think Tron will be ready to go by next summer unless there is another construction shutdown (and since Florida is not California, I think that is unlikely).

This is all speculation and opinion with no resources to report.

Regardless, I have put off my next trip until 2022 in hopes that these two Disney coasters as well has Universal’s Velocicoaster are up and running.

I'd agree with you on that. CS was my first launch coaster too so it'll always hold a special place in my heart.

I'm honestly a bit sad that Disney hasn't worked with Intamin on a new coaster since then. I think if Disney is ever looking for a more thrilling coaster thats catered to older kids, they should go to Intamin. Imagine an extremely well themed blitz like taron. It doesn't need inversions, but quick turns and a few good launches would be great. However, thats unrealistic and Disney will probably continue doing Vekomas.

I personally, as a coaster enthusiast, find that Everest gives the best forces among the Florida Disney coasters (which are the only ones I’ve ridden so far.
I too will throw my list up there.