"This shows celebrates Disney music and stories that are inspired and influenced by people and cultures from around the world," the Imagineering Portfolio Executive for Walt Disney World Resort, Zach Riddley, said during the Epcot – The Magic of Possibility presentation for Disney D23's Fantastic Worlds event. "It's a massive and ambitious show we're bringing to life on the largest lagoon in any Disney park. And we've developed one of the largest toolkits ever constructed to tell the story in a truly awe inspiring way."

That toolkit includes five enormous floating platforms, including one with a six-story ring structure that will house a water curtain during the show. Other platforms will support 25-foot-tall, double-sided LED walls. The show also will use eight 54-foot moving arms, along with moving lights, fountains, and lasers.

But what to do with those platforms during the day, when they would be visible to guests walking around World Showcase? Enter the fountains. 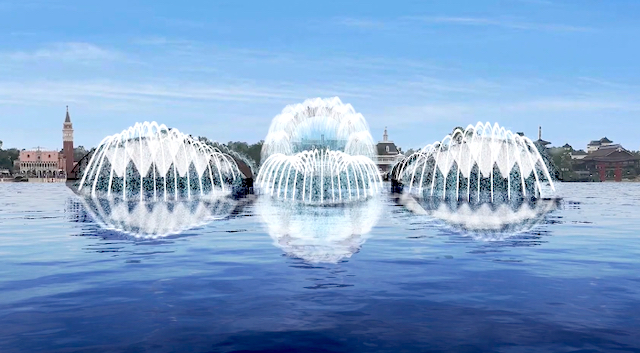 "I just know these show elements will become a defining feature of Epcot," Vice President of Epcot Melissa Valiquette said. "Their scale gives us a chance to bring a beautiful new ambient daytime look to the World Showcase lagoon, with water fountains that perfectly situate these elements within World Showcase."

Harmonius had been scheduled to open last year, but the pandemic delayed its premiere. Disney has not yet announced an opening date for the show.

* * *
You can be part of our year-end surveys to determine the 2021 Theme Park Insider Awards and ThemeParkInsider.com attraction recommendations by signing up for our free, three-times-a-week email newsletter. That's the exclusive way to get the links to our surveys.

I love to take photos at Disney world. Really glad to see these new show elements will be fountains during the day!

Hmmm. Bit concerned about this in regards to scale. The lagoon has a feeling of a real body of water, a lake or bay upon which cities were built. These elements look massive, so while I'll hold judgment until we see it live, I can't help but think this will have the same scale issues as the wand and the sorcerer's cap, which belittled the structures around them. (And still catching up on all the D23 content this week. Some good stuff.)

Disney California Adventure Opens Up as the State Cracks Down