It's time for a ride on Formula Rossa - the world's fastest roller coaster. Ferrari World Abu Dhabi's custom Intamin Accelerator pulls 4.8 Gs as it launches riders from zero to a world-record 149.1 miles per hour in just 4.9 seconds. The coaster is so fast that ride attendants will hand you a pair of plastic goggles to wear as you prepare to board. At these speeds, a bug or even a grain of Emirati sand could really screw up your eyes if they hit.

Assuming that you'd be keeping your eyes open for this launch, of course.

Formula Rossa doesn't get the love that many other coasters with similarly gaudy stats enjoy. Perhaps it's due to the ride's location. Ferrari World has never appeared on the TEA/AECOM annual attendance report, even for its region, meaning that it attracts fewer than 1.6 million visitors annually, despite being open year-round. So there just aren't that many coaster fans with personal experience on Formula Rossa.

In addition - and I say this as a devoted fan of Formula Rossa - this coaster plays a one-note song. Formula Rossa does not provide a symphony of crescendoing movements, with varying speeds, G forces and airtime. The views are nothing to write home about. The theme here is speed - and no theme park ride on Earth delivers it as well as Formula Rossa does.

The adventure begins at the ride's entrance, which is framed by giant portraits of Ferrari Legends:

I have not revisited the park since two-time world champion for Ferrari Niki Lauda passed away in 2019, but his portrait deserves a place here. Three living drivers have won F1 championships for Ferrari: Jody Scheckter, the legendary Michael Schumacher, and Kimi Räikkönen - who continues to race F1, this year for the Ferrari-powered Alfa Romeo team.

Having grown up in Indianapolis, I fell in love with racing a long time ago. So when I ride Formula Rossa, a front-row seat is a must for me. I want to see that iconic Ferrari F1 racing nose in front of me, to promote the illusion that I am strapping in for a Formula 1 race. 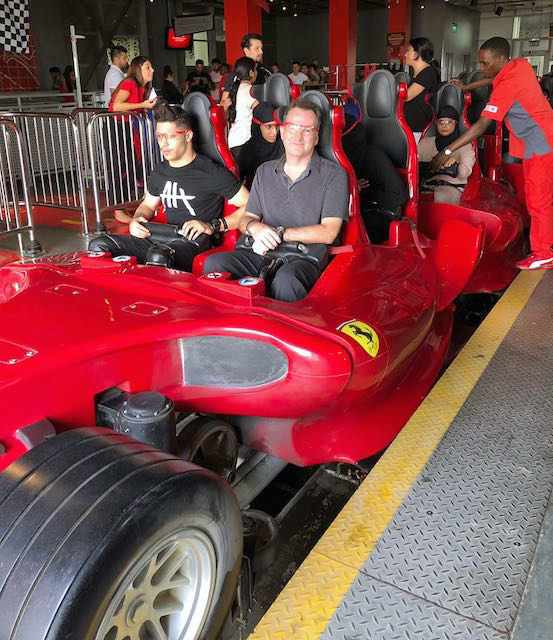 When I spoke with the creative team at JRA a couple years ago, we talked about their design work on Ferrari World, and the importance of details like that to fans who visit sports-themed attractions. Ferrari isn't just a sports team, of course - it's a luxury brand that resonates with consumers around the world, including some who do not follow Formula 1. But the thematic detail on Formula Rossa - and throughout Ferrari World - demonstrate that Ferrari has not forgotten what made it such as powerful brand.

The thrill of racing.

No video does this hydraulic launch justice. But consider for a moment that Formula Rossa's initial hill stands 170 feet tall. That's a solid height for a coaster hill, but at 149 mph, Formula Rossa's car blows past it like a gentle rise on a country road. From there, Formula Rossa dives through a trio of sweeping curves. The second feels like it might brush the ground, amplifying the speed of the car. I finally got a taste of what it must be like to drive an F1 car through Raidillon at Spa-Francorchamps - a dream for any F1 fan.

After that, we head back toward the park and over a series of bunny hops that help scrub our speed for a safe return. It goes by quickly, but at 6,562 feet, Formula Rossa is the sixth-longest coaster in the world, ranking in between Holiday World's The Voyage and Cedar Point's Millennium Force.

You can cover a lot of ground quickly when you are racing this fast.

I feel the need, the need for speed!

Never do extreme things in countries that lack tort law, the only thing keeping you alive here is the goodwill of the park operators.

And gosh, Fabio thought he had it bad when that bird smacked his face on Apollo's Chariot, you'd be dead on this thing.

this must be absolutely wild at night

This must be one hell of a ride. Outbound Lighting

Take a Virtual Ride on the World's Best Coaster