Disneyland Fans Return for 'A Touch of Disney'

March 18, 2021, 8:32 PM · Disneyland's "A Touch of Disney" food and merchandise event kicked off today at Disney California Adventure. This is the first ticked admission in one of the Disneyland theme parks since the Covid-19 pandemic closed the parks over a year ago... so fans were ready for it.

With people kept away from the parks for more than a year, fans swamped the Mickey and Friends parking structure ahead of the event's noon start. I arrived at 11:35 this morning and needed 35 minutes to get through the toll booths and up to a physically-distanced parking space. Disney was parking every other space in its garages for the limited-capacity event.

But with no trams operating, fans had to hoof it down the tram path to the park. The queue for the early arrivals stretched back behind Downtown Disney and snaked through the (closed) ticket booth queues, taking me 45 minutes to walk through on way into the park. 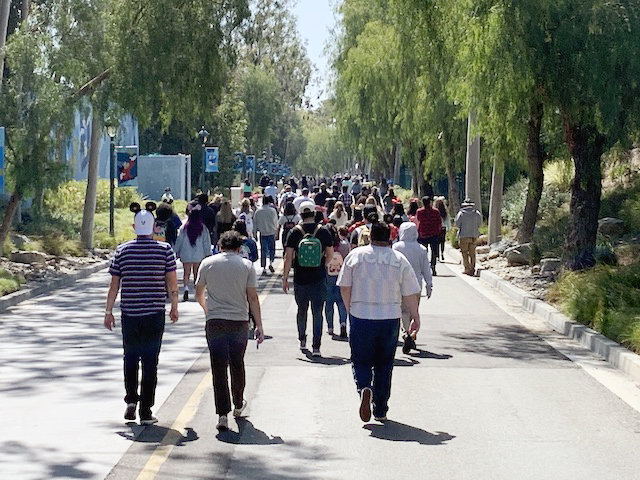 Physical distancing was pretty good, with cast members stationed throughout the area to monitor guests. 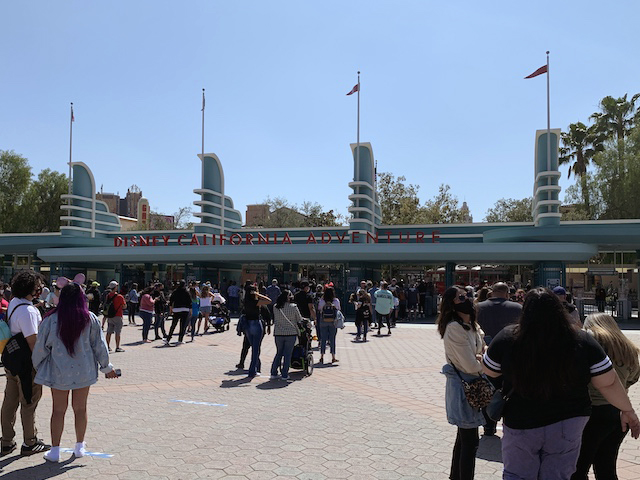 By the time I left the event in mid-afternoon, though, later arrivals found an easy walk-in for entry. 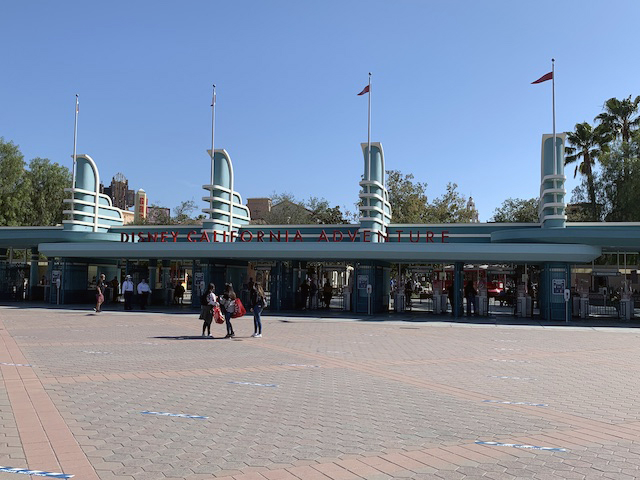 It's been a long year, everyone, so let's enjoy a walking tour of the park.

I loved the marquee on the Sunset Showcase Theater in Hollywood Land, which welcomed guests to "Westview" before glitching and showing "Home is Where You Make It." If you didn't the reference, the marquee followed with a "WandaVision" logo. Nice touch.

Each guest to A Touch of Disney gets a $25 Disney Dining card as part of their $75 admission, and Disney has filled the park with a "best of" menu of both Disneyland and Disney California Adventure. Wanting to take advantage of the unique opportunity to enjoy some Disneyland favorites as DCA, I opted for "A Taste of New Orleans Square."

Starting with the Chicken Gumbo [$7] from the Cluck-A-Doodle-Moo marketplace in Paradise Park. 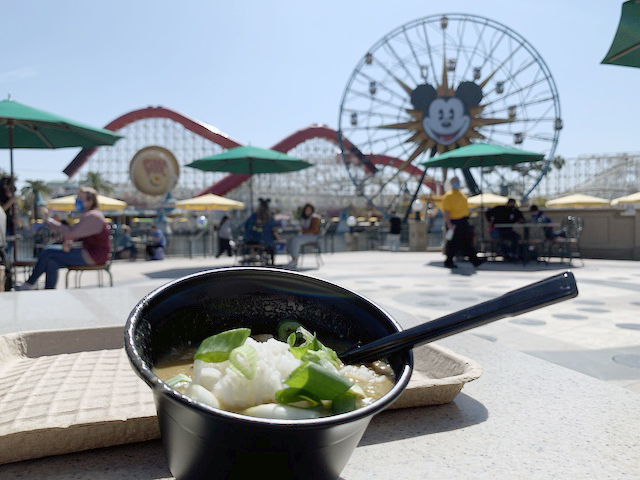 This wasn't the full-sized version from Cafe Orleans, but it was packed with chicken, ham, and sausage, making it a delightful and filling start to my day.

With the soup as my starter, I opted for New Orleans Square's most famous dish as my main course... and, let's face it, dessert. Time for a Monte Cristo! 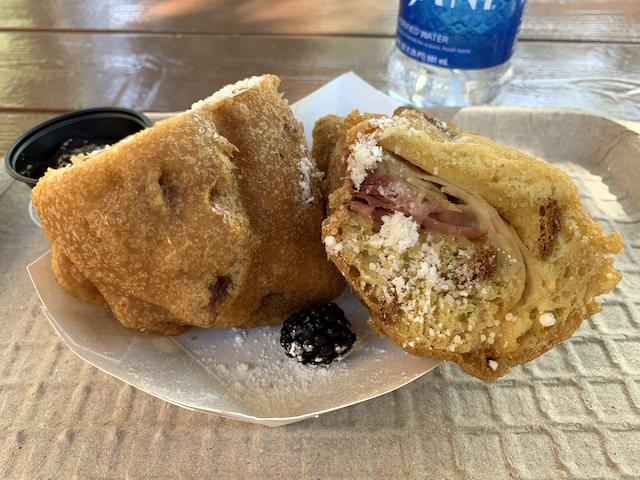 It seems weird ordering this from Smokejumpers Grill. For $10.99, you get "half" of a Cafe Orleans Monte Cristo, but that thing has served four people in my family before, so eating two slabs of Monte Cristo - after that Gumbo - was more than enough to knock me out for the night. It didn't seem exactly like the Disneyland original, but maybe I just prefer my "Socially Distanced Kitchen" home version.

Still, it was a tasty sandwich. But throw in a bottle of water [$4.25] with the Gumbo, and then add taxes, and that left me with about a buck on my $25 dining card, which brings up what I am sure will be a talking point about this event. There's pretty much no way to spend exactly $25 at Disney. So you're either gonna leave some money on the table (this dining card is good only for food at Disneyland, unlike other Disney gift cards), or - more likely - you're gonna end up spending even more while you are here. You can't use the dining card to purchase alcohol, either, which becomes an issue for thirsty Disney fans looking to make this their attempt at "drinking around the lagoon."

A Touch of Disney provides evidence to support the charge that thousands of locals come to the Disneyland theme parks just to walk around, eat and shop. Because that's basically what there is to do here, with attractions closed until the parks "officially" reopen on April 30.

Guests do get unlimited Photopass downloads with their admission, and Disney has stationed photo ops around the park, as well as distanced character encounters, including Goofy - and Max! - fishing off the balconies above Pacific Wharf. 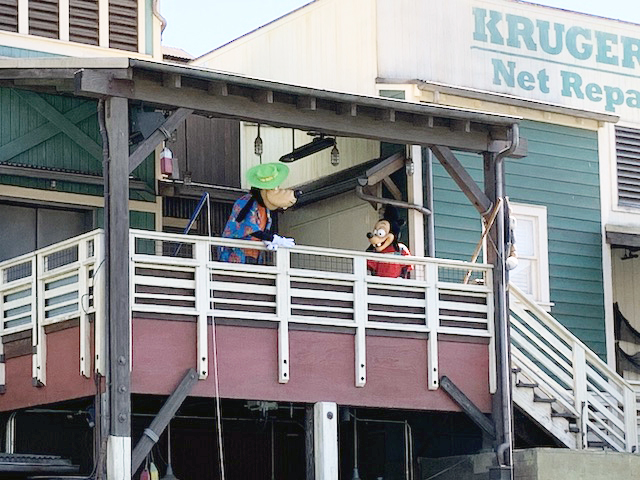 It's a merchandise event, too, so you could seek some relief from the sun inside the many open stores and pick up some new Disney souvenirs. 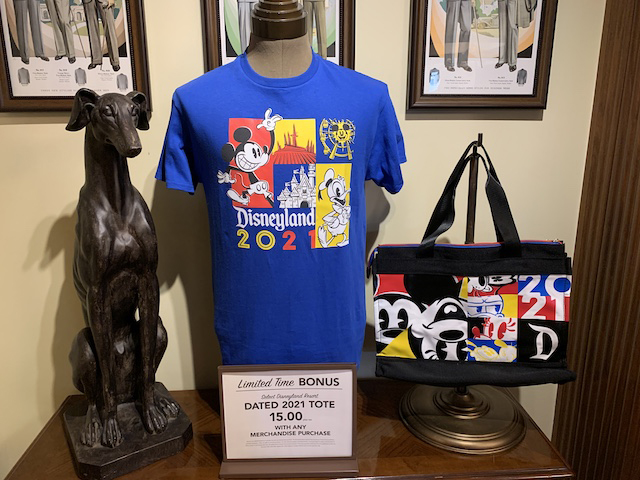 But for most of us, A Touch of Disney provides, well... that. It's an opportunity to get back in the parks and enjoy just a touch of Disney after a long year without it. Well, if you don't count all the time over the past year that many of is spent binge-watching Marvel, Star Wars and animated movies on Disney+. Or going to Disney in Orlando.

As the Hollywood Land marquee suggested - your Disney home is where you make it, after all.

I am sure it was great to get back into a park for a few hours even though the rides were closed. Still just nice to get back to some semblance of normalcy.

Not sure how it would be trying to explain to a 4 year old, Park Open, Rides closed....

It’s it just me or is the Max character super creepy?

Legoland California Goes for an April 1 Return, Too