Disney Doubles Down on SEA in Jungle Cruise Revamp

March 19, 2021, 3:13 PM · Walt Disney Imagineering will lean into its original Society of Explorers and Adventurers franchise as it revamps its Jungle Cruise attraction, Disney confirmed today.

Disney announced earlier this year that it would Jungle Navigation Co. Skipper Canteen restaurant in the old Adventureland Veranda space at the Magic Kingdom. Disney announced the news in an "recently uncovered" edition of the Jungle skippers' "The Daily Gnus" (say it out loud), posted on the Disney Parks website today. It's an "interview" with Jungle Navigation Co. owner Alberta Falls. 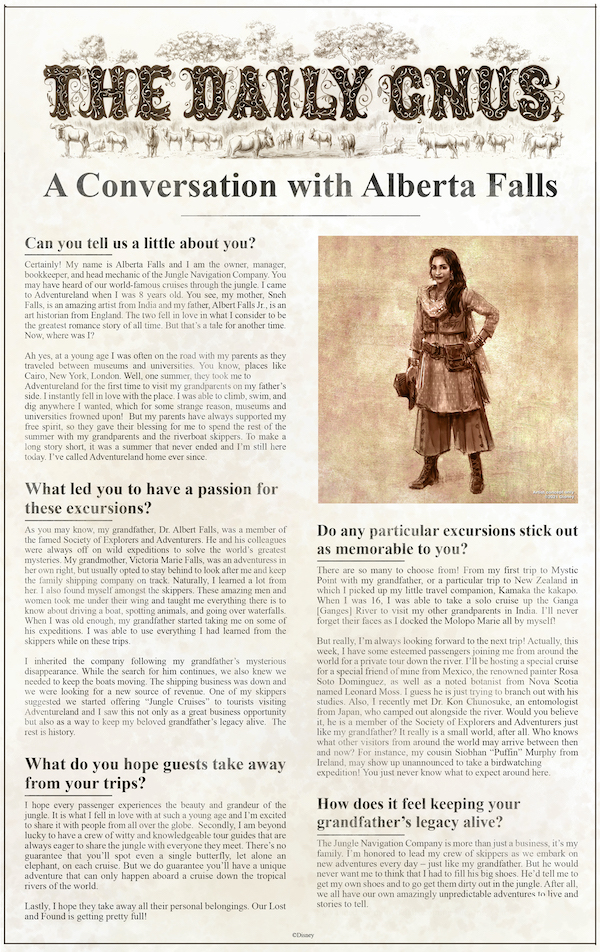 Alberta Falls is granddaughter of Jungle Navigation Co. founder Dr. Albert Falls (for whom the Jungle Cruise's Schweitzer Falls is named - in one of the ride's countless silly jokes). Earlier stories had suggested that Alberta was Albert's daughter, but now there's an Albert Falls Jr. in the timeline. It's also worth noting that Disney now has made Alberta a South Asian woman with this reveal, as the daughter of an Indian mother and English father.

Going back up the family tree, he senior Albert was a member of Disney's Society of Explorers and Adventures, a hundreds-year-old secret society headquartered at Magellan's restaurant at Tokyo DisneySea. The SEA long has been a bit of an Easter egg for Disney Parks fans, as a park-original IP franchise that mostly features the likenesses of Imagineers. It provides the backstory for the Mystic Manor ride at Hong Kong Disneyland as well as the Tower of Terror and Soaring: Fantastic Flight rides at Tokyo DisneySea. In recent years, however, Disney has retconned backstories for Big Thunder Mountain Railroad, the Jungle Cruise and other attractions to add them into the SEA franchise. Here's an overview, if you haven't seen it yet:

Now a Disney+ TV series based on the SEA is reportedly in the works, potentially making this theme park Easter egg into the type of multi-platform franchise that Disney craves.

Revamping the Jungle Cruise ticks two boxes for The Walt Disney Company. It allows Disney to rid one of its enduring entertainment properties of racist caricatures for which the company has no desire to spend social capital to defend, and it helps the company develop a new multi-platform entertainment franchise by tying it to that same enduring property - the Jungle Cruise.

The new Jungle Cruise will include several new scenes and "welcome new characters from around the world." It's slated to open in Orlando and Anaheim by the end of the year.

Here’s hoping that the infusion of the SEA IP into this attraction is met with enough success to warrant the continued refurbishment, ahem...”refreshing”, of more classic attractions. I think with some tweaks here and there they could even breathe new life into the Swiss Family Treehouse. I wonder, would the Dreamfinder at Journey Into Imagination be a candidate for a time-traveling member of SEA? This might be blasphemy, but I say revamp the Carousel of Progress into a series of vignettes about SEA’s history. Actually, keep Carousel. Instead, re-skin the Hall of Presidents!

Journey Into Imagination needs to be blown up for a 'Big Hero Six' attraction.

I wouldn’t be mad at that. Big Hero 6 is rife with theme park attraction possibility. I’ve also heard the idea of a Inside Out themed attraction in that spot bandied about, to which I would also not be averse. The original iteration of Journey was, I think, roundly accepted as a far superior attraction. Never understood why it was unnecessarily mangled.

Yeah, Imagination is one ride I will not miss in current version.

Even the Imagineers openly acknowledge the '99 revamp was a huge misfire and never the same.

Big Hero Six. The movie where the robots come to take over all the jobs: construction worker, nurse, MMA fighter.

What I love about the SEA concept is how it advances the richness of "story" which supports the "park as a platform" approach to themed entertainment.

I'll take SEA any day over putting an AA Dwayne Johnson in there just to promote the movie.

@TH: I agree 100%. It almost seems like a radical concept in today’s pre-existing IP-craved environment. I think that’s why many of us Theme Park enthusiasts dig the concept- it hearkens back to the origins of what made Disney parks so original and great

Agreed, MikeW. Though after the way the inclusion of Johnny Depp has backfired on PotC, I doubt Disney will ever include a living actor as an animatronic again. Especially an extremely lifelike one who appears to be so drunk he can't even control his eyeballs, haha.

@fattyackin also strongly agree with the idea of using the SEA to refurbish the Swiss Family Treehouse. The Tarzan overlay is an abomination, it makes me angry every time I walk through it.

It could be fun to have new scenes. We only ride JC once per trip, because it's basically the same as I remember back in the 70s. Hopefully, it will also include more advanced AAs?

They brought back more fun to life and humor as well. travel nursing jobs in michigan

Go Wayback for the First Ride on Universal's Men in Black

Legoland California Goes for an April 1 Return, Too