April 27, 2021, 2:35 PM · If I asked theme park fans what non-existent ride they most wish they could go on, I betcha the top answer would be "a time machine." Countless theme park fans obsess about the attractions of the past. "What I would give to go on (fill in the blank)," or "I just wish I could experience (insert title here) once again."

While the new ride occupies the same show building at the corner of Charleston Circle and Memory Lane Square as the original installation, the building has seen a couple of other tenants since then, most recently Voyage to the Iron Reef, which closed in January 2020. Return to the Fair runs on the same Triotech ride and gameplay system as Iron Reef, but with one very significant 4D enhancement.

Breathe deeply as the ride begins, and enjoy the smell of boysenberry pies.

Yes, Knott's has added scent to this boysenberry-themed adventure, upon which you try to blast stolen pies from the clutches of Crafty Coyote's pups, who have been sent to raid the Boysenberry Pie Factory. Your shooter is a "jelly blaster," a jar of Knott's Boysenberry Jam with a boysenberry at the end of the pull string you will use to fire it. This makes the game play feel more like Disney's Toy Story Midway Mania than a traditional shooter with triggered guns. But it also means that gameplay here is a two-handed task. 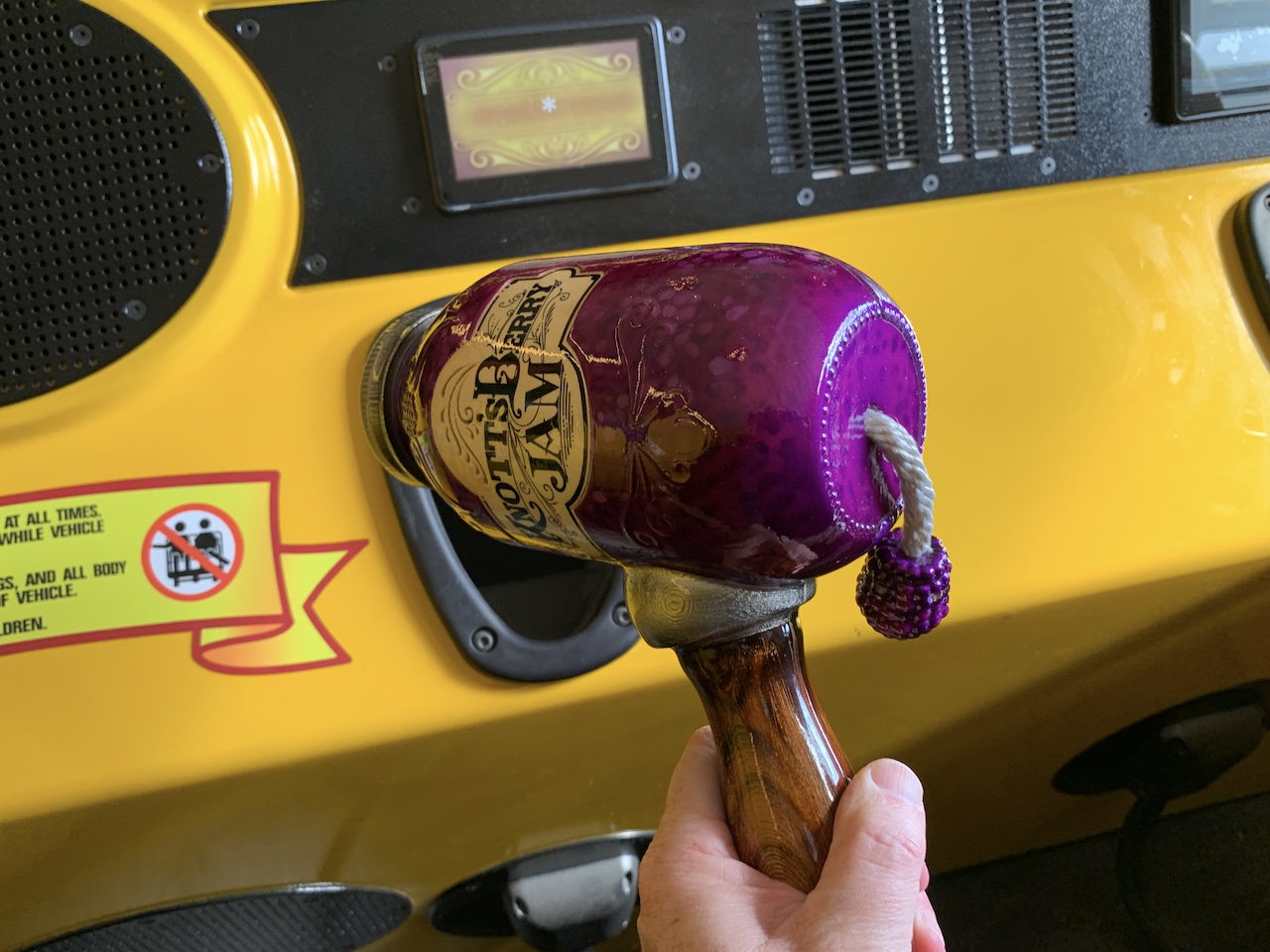 Great family entertainment works on multiple levels, with obvious gags for the kids and more subtle ones for the grown-ups. Return to the Fair delivers similar returns for its riders. Millennial, Gen Z and Alpha guests will enjoy the brisk cartoon action of the heist and chase, while Gen X fans enjoy the added layer of nostalgia for the original attraction, which was designed by Disney Legend Rolly Crump while on hiatus from the Mouse.

Return to the Fair ticks the same story beats at the original, starting with the Boysenberry Factory, before continuing through Frog Forest, Fortune Teller Camp (Gypsy Camp in the original, but appropriately renamed here), Thunder Cave and Weird Woods, before arriving at the County Fair. But with 3D imagery and that interactive gameplay, Return to the Fair's story runs at a pace that the original ride just could not match.

That's the danger in revisiting the past. Our memories can distort the reality of past experiences. Nostalgia lures us into seeing old theme park rides as better than they might feel if they were transported into the parks of today. (You can see a ride video for the original version in our All Aboard the Hype Train for Knott's Bear-y Tales.) Knott's therefore chose not to recreate Knott's Bear-y Tales but to reboot it, bringing its soul and characters back to revive an interactive attraction that had quickly fallen out of favor with park guests.

Uptime and capacity issues diminished many fans' opinion of Iron Reef, and it remains to be seen if the refurbishment into Return to the Fair has corrected those issues. In today's media preview, the ride operated splendidly, but a few dozen reporters hardly put the same load demand upon an attraction as a park filled with guests, even if the park is operating at a Covid-reduced capacity.

As for the gameplay, if anything even looks like a pie, blast it. That first scene is not a warm-up; you're scoring points right away. If a hit pie doesn't immediately disintegrate, hit it again for extra points. Try to clear all the pies you see in silhouette at the end of the Fortune Teller Camp scene. That provides me a nice bonus on my second ride. And don't focus exclusively on the pies. Blasting Crafty Coyote will earn you points, too, as will a variety of background targets.

The game is fun, but if nothing else, Return to the Fair brings Knott's a delightful character family, including Boysen Bear and his sister Girlsen Bear (oh, the puns in this attraction), as well as that villain, Crafty Coyote. (Look for coyote paw prints on the ground as your walk through the queue.) 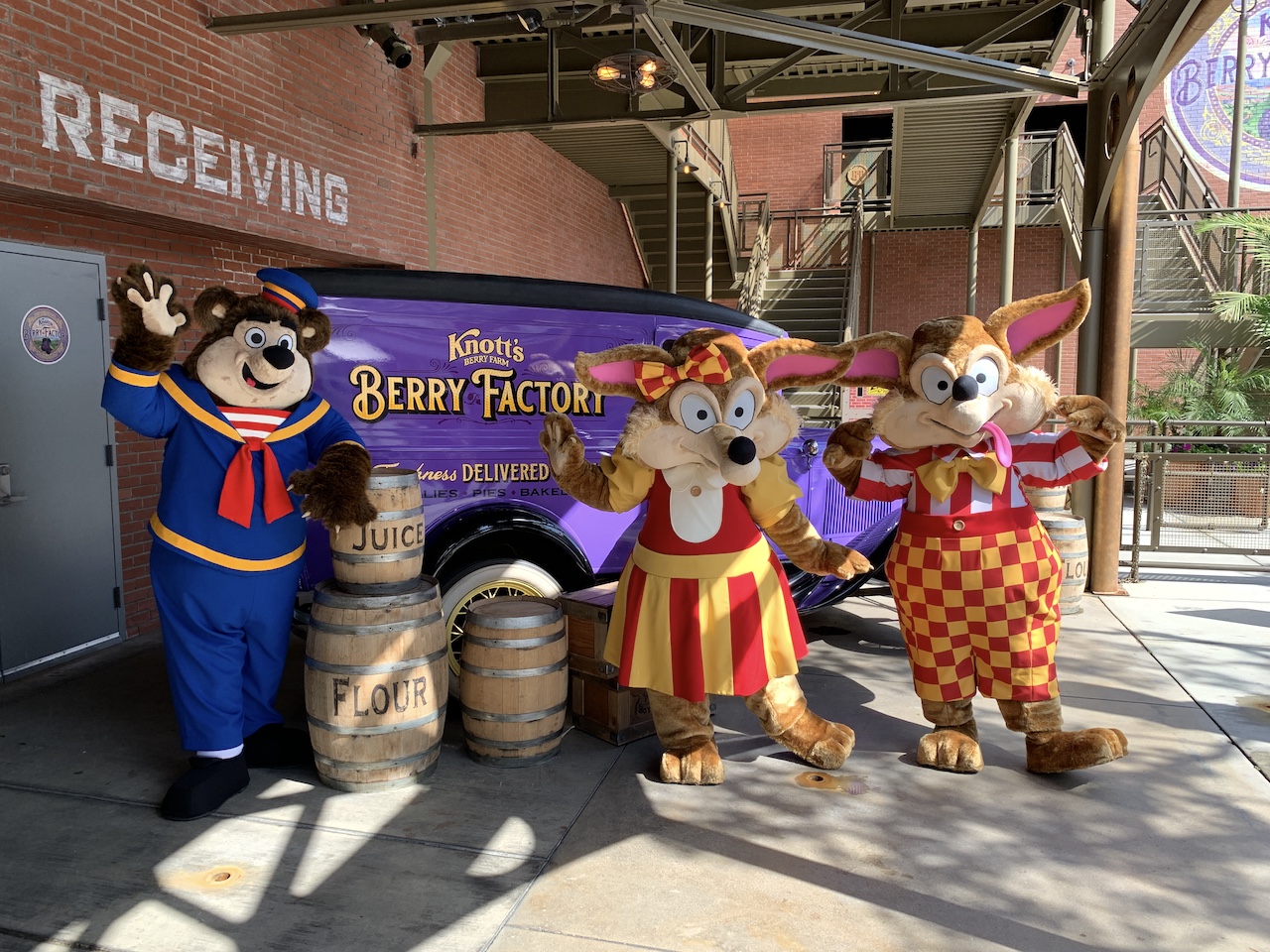 While it can be fun to revisit the past, successful theme parks need to build for the future. Ultimately, nostalgia won't save Return to the Fair any more than it did the original Knott's Bear-y Tales. But great characters, fun action and a good time draw fans in any time period. With Knott's Bear-y Tales: Return to the Fair, Knott's has taken a strong step into its second century.

Knott's Berry Farm reopens to passholders on May 6 before reopening to the public on May 21, which will be the official opening day for Knott's Bear-y Tales: Return to the Fair.

Maybe I'm a weirdo, but I liked Voyage to the Iron Reef. I did experience some technical issues on my few rides on it in summer 2019, but overall, the animation, gameplay, and theming were really solid for a predominantly digital experience. Given the limitations of the building where it's housed, Knott's was never going to be able to get anything as dynamic and unique as it's sister attraction Wonder Mountain's Guardian at Canada's Wonderland, but Voyage to the Iron Reef was a strong compromise given the circumstances.

This new attraction appears to appeal to the cuteness and nostalgia that Knott's has been trying to tap into recently that brings it into direct competition with Disneyland/DCA. It's pretty interesting since Disney is going in the other direction by appealing to the more thrilling action/adventure (Cedar Fair) crowd with its latest shooting-gallery attraction W.E.B. Slingers. The back and forth these 2 parks have taken with each other over the decades is the stuff of a Ken Burns documentary.

The original ride only lasted 11 years, although designed by the great Rolly Crump, I always thought the character design was a little wonky, it seems a little better here. Kingdom of the Dinosaurs was marginally better, Voyage was surprisingly good and immersive, and this one looks like a home run.

The main problem I saw with Voyage was the very slow loading process, the loading platform is very small, so I don't see how they can improve it much. Also I believe the original Bear-y Tales was in the Gypsy Camp, which changed to Roaring 20s with Kingdom of the Dinosaurs, then to Boardwalk with Voyage, now with the new ride, it's still Boardwalk, which is ok. Yes, Knott's needs more dark rides, maybe a not-so-scary haunted hotel ride. And maybe a tea cup type ride with berry jam jars.

@Disfan - I don't think they changed the ride system here, so this "new" attraction will have the same issues with slow loading that Iron Reef had - this is also an issue I anticipate on W.E.B. Slingers unless Disney put in parallel tracks, which might be tricky given the limited space they had to work with (Ninjago is also a dreadfully slow loader).