Bookings for Disney Wish will open May 27, 2021 for three- and four-night cruises from Port Canaveral to the Bahamas, starting with its maiden voyage on June 9, 2022.

"The Disney Wish is our fifth jewel," Walt Disney Imagineering Executive Producer Pam Rawlins said in a press conference following the online presentation. "Each of our ships has a special personality and what inspired is a motif - enchantment. It is entwined in every story that we've told through Disney - whether it's Marvel Disney/Pixar, Star Wars - that enchantment is a part of our life, and we've taken that and infused it in every space on the ship."

Of course, Disney is unveiling this ship at a moment when neither the Disney Cruise Line nor any other cruise companies can sail from the United States due to the pandemic. "Fortunately for the operation that we're planning on board, none of the guest experiences will be impacted by what we've been experiencing through the pandemic," James Willoughby, the DCL's Director of Hotel Operations, said.

"What's exciting is we found new and innovative ways to continue to dream up the magic as we do in this new world," Kristen Baribeau, Area Manager, Entertainment Operations, said. "It's keeping our finger on the pulse of what those new trends are the new technologies that are coming out, and that's really helped us to infuse some of the new Disney magic that you'll see as you step on board to Disney Wish." 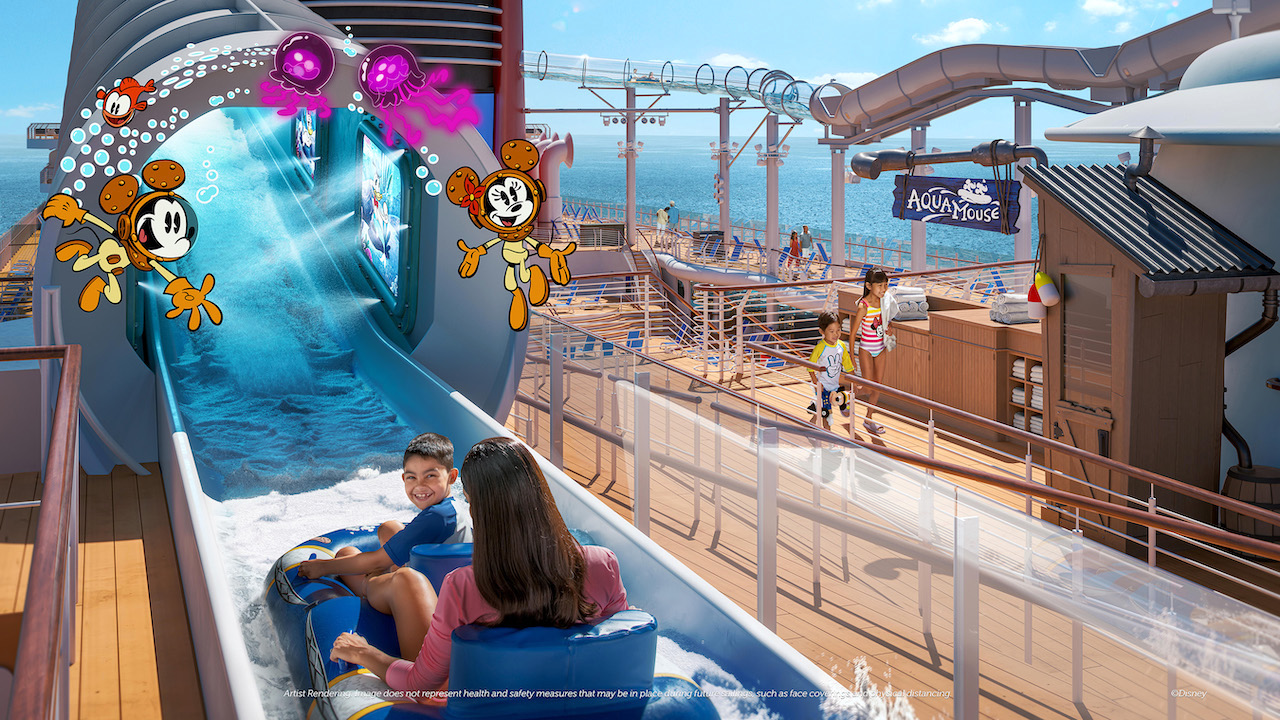 The new Triton-class ship will offer the "first Disney attraction at sea," the AquaMouse - a water coaster themed to Mickey Mouse short films. You join Mickey and Minnie's "Port Misadventures" excursion company for a trip to Mermaid Lagoon that, of course, goes delightfully wrong. You shoot through a magic tunnel into the cartoon world of "Scuba Scramble,” a new animated short that plays out through oversized virtual portholes on the water coaster route. The ride will feature a new musical score by Emmy-nominated composer Christopher Willis ("The Wonderful World of Mickey Mouse").

Other upper deck attractions will include Toy Story Splash Zone, a water playground for kids inspired by the short "Partysaurus Rex." Features will include Slide-a-saurus Rex, a double-looping waterslide; Trixie’s Falls, a six-inch-deep wading pool with a small fountain and waterfall, and Wheezy’s Freezies, a smoothie bar. For adults, the upper deck will feature Quiet Cove, with a bar and infinity pool.

Below, Disney Wish will feature a reimagined Disney’s Oceaneer Club for kids ages 3 to 12, with a slide from the atrium into the club, which will include a Marvel Super Hero Academy, Fairytale Hall, and (get jealous, adults) Walt Disney Imagineering Lab, "a first-of-its-kind opportunity for kids to discover the secrets of world-renowned Disney Imagineers." Features will include a Ride Studio where kids can design and ride their own roller coaster. 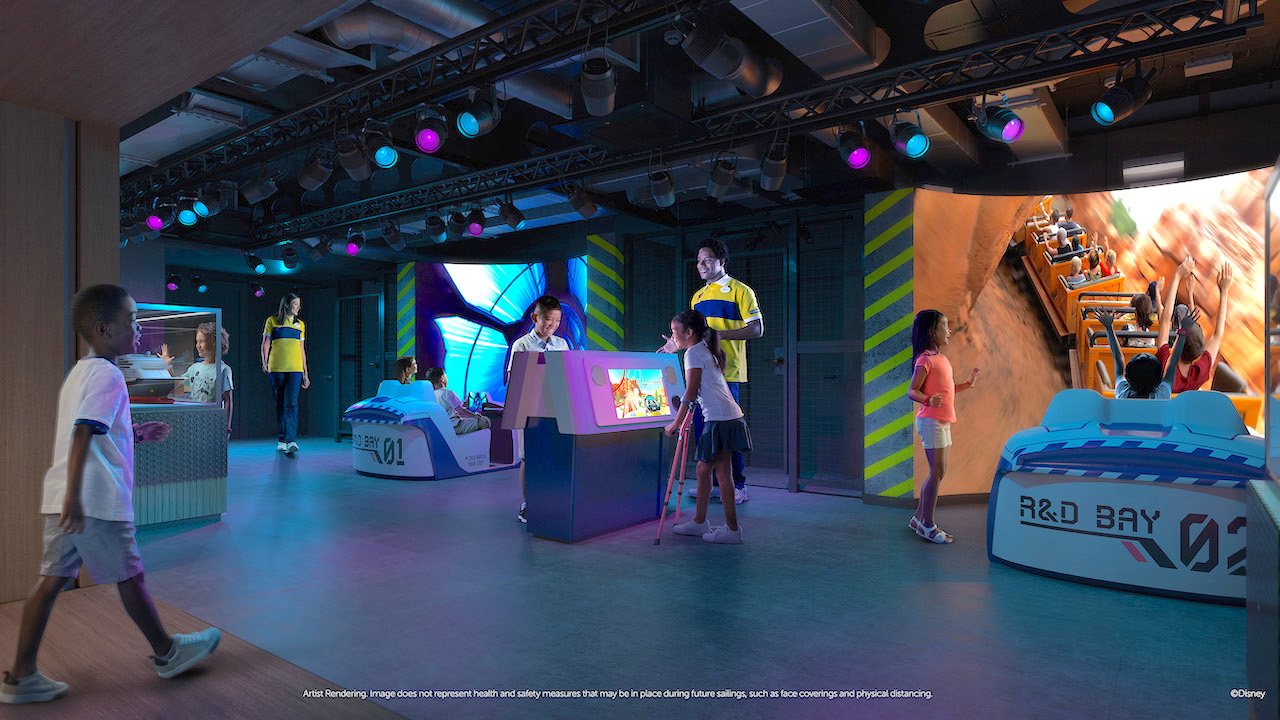 It’s A Small World Nursery will offer babysitting for children from six months to three years while Edge and Vibe will offer programming for kids ages 11-14 and 14-17, respectively. 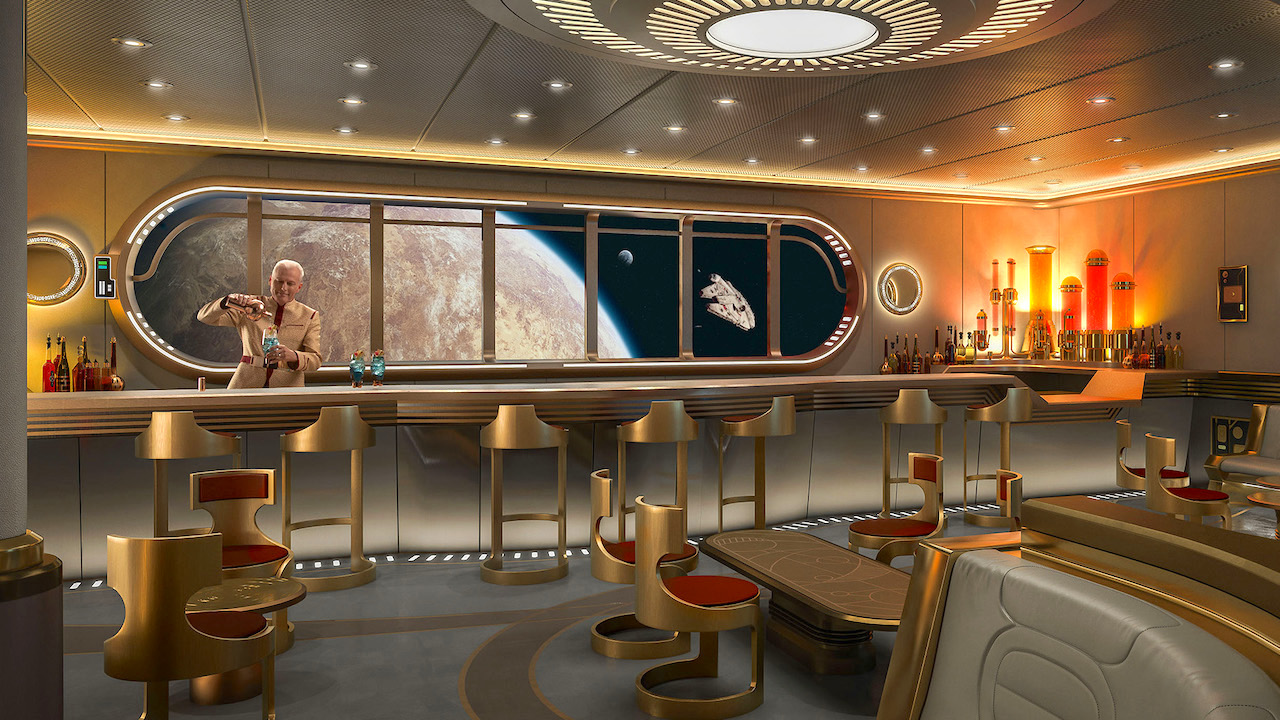 Adult experiences on Disney Wish include Star Wars: Hyperspace Lounge, designed to be part of a "luxurious yacht-class spaceship," with an animated window into space, where guests can see famous ships from the films and planets such as Batuu, Tatooine, Mustafar, and Coruscant. Three other locations will be inspired by Beauty and the Beast: The Rose lounge, a Cogsworth-inspired reimagining of Palo, the DCL's steakhouse, and Enchanté by Chef Arnaud Lallement, a Lumiere-inspired fine dining location from the three-Michelin-starred chef of of L’Assiette Champenoise, near Reims, France. 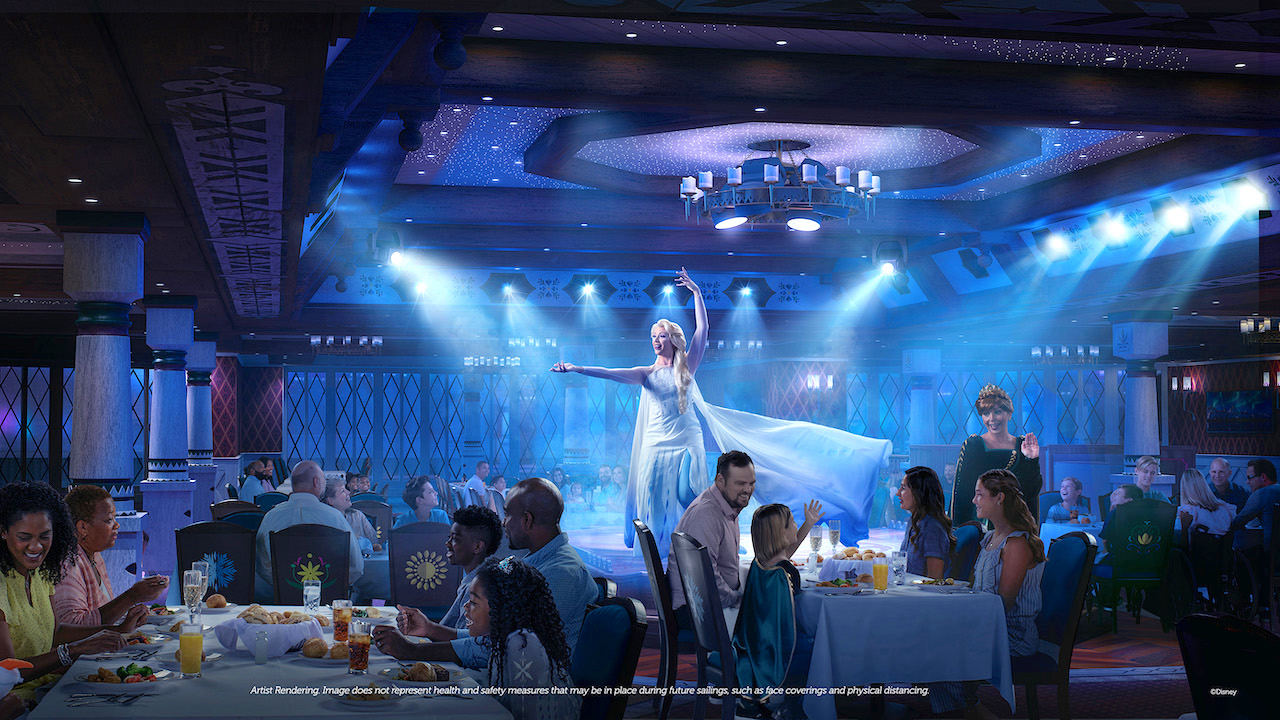 Family dining will include

As for entertainment, the ship's Walt Disney Theatre will stage Disney’s Aladdin – A Musical Spectacular, while a new Grand Hall stage will feature entertainment throughout the day. Hero Zone will be a "futuristic sports arena" with "physical challenges themed to some of Disney’s most incredible heroes during over-the-top, game show-style competitions." Finally, Luna - themed to the Pixar short - will transition from family entertainment during the day to an adults-only venue at night. 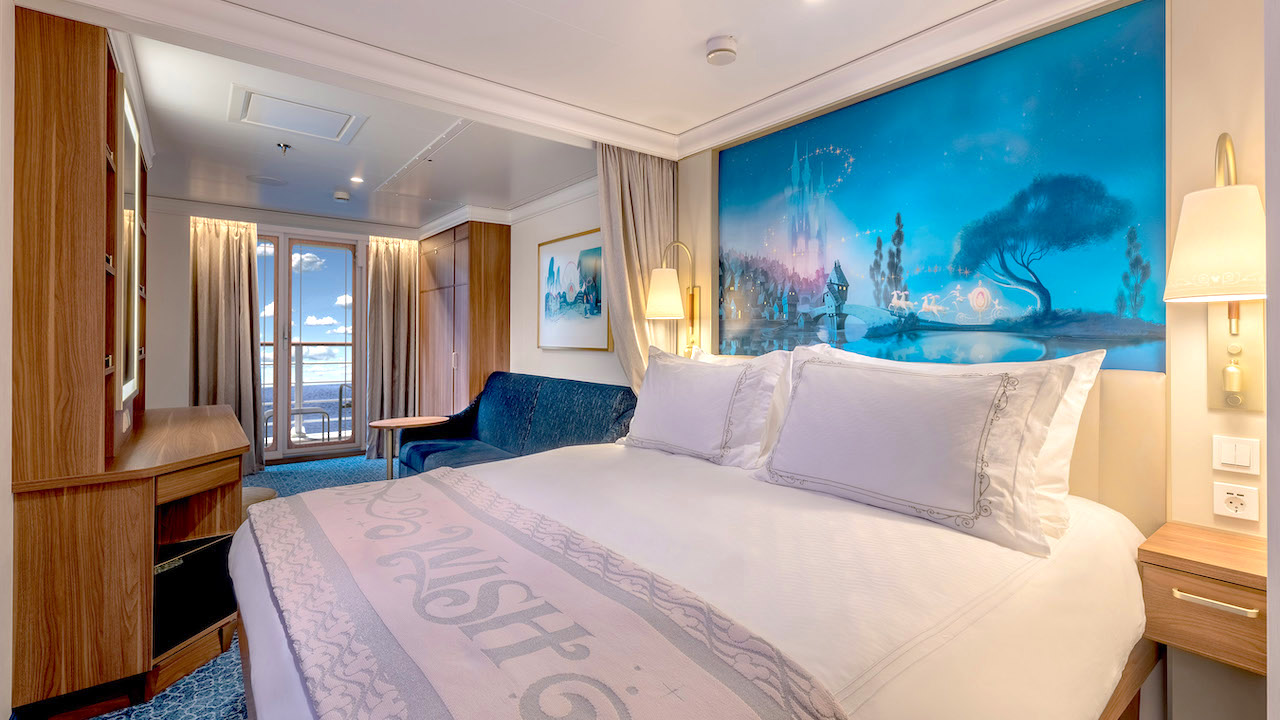 Disney Wish will have 1,254 staterooms, of which 90% will be outside staterooms, including 948 verandah staterooms and 185 oceanview staterooms. There will be 76 concierge staterooms and suites, including Disney's first two-story royal suite, with floor-to-ceiling windows and a spiral staircase connecting the floors. The Concierge Lounge will be more than three times the size others in the DCL fleet and will include a full bar, light bites, a kids' area and an outdoor terrace.

Update: Using some supplies sent to us by Disney, Natalie made a TikTok.

Undoubtedly all for the low-low price of >$2k/person for a 3-night/4-day vacation, which is $8k for a family of 4.

I get that Disney has established a high-end brand and plenty of loyalty in DCL, but I just can't believe people really pay these prices along with the inevitable add-on/excursions that easily turn a long-weekend's voyage into a $10,000 investment. I could spend weeks at WDW for what DCL charges for short, single port of call voyages.

I like what I’m seeing but I never cared for the cruise line, in fact any cruise line.

It’s way too expensive and would rather used that money to travel to various international parks instead of being stuck on a boat for a weekend.

Man this really seems to be something special. Disney keeps stepping up their game in the cruise industry.

Never been on a cruise nor do I really want to, but this seems cool.

Not sure where you got those prices from. Until Covid struck my wife and I were booked on a 3 day Disney cruise as the finale to a 14 night Disney stay precede by a 3 night Universal stay and our combined price was less than £2000 for the two of us. It’s more than we would expect to pay for a ‘standard’ cruise but then we were paying more (way more) for both the Universal and Disney rooms than we would ever dream of paying for a ‘normal’ holiday so it was very much on a par with the rest of the vacation.

People who say they ‘don’t like cruising’ when they’ve never been on one are as ludicrous as people who say they ‘don’t like hotels’. It’s all down to the choice of cruise line, itinerary, and what you want to do. At the end of the day its just a fancy hotel resort with an ever-changing view. You make of it what you want. And there is literally a cruise to suit everyone. Just possibly not a Disney cruise....

I have occasionally shopped cruise prices, and my parents are frequent cruisers. And yes, I have seen prices for 4-day/3-night itineraries with a single POC at Castaway Key in the $2,000/person/night for an outside stateroom on DCL in the past, so would anticipate base rates to be in that $1,500-2,000 range on a ship where virtually every cabin is an exterior stateroom.

Despite having pretty limited itineraries, DCL prices are among the highest per night cruises I've ever seen, and in some cases are double or triple the costs of Royal Caribbean and Norwegian (not even bargain-basement Carnival, which can often be a third or a quarter the price of DCL on a per person/per night basis). I get that DCL has created a niche and immense demand from their hordes of devoted fans (especially the ones that haven't been able to cruise for over a year now), but I simply don't get the appeal, especially when other lines have upped their amenities and entertainment offerings for younger kids and families. Obviously, the IPs at DCL's disposal are far more recognizable than what other lines can tap in to, but I just don't see the 2-3x cost to take a DCL even compared to a WDW vacation, where you can take a comparable length trip at a moderate or deluxe WDW resort with DDP (when it was still available) and park tickets for significantly less than DCL.

More power to DCL in being able to charge what they do for their vacations, but I just don't understand how guests can be so blinded by the Disney shine that they cannot see how much they're being fleeced compared to other cruise lines. Disney resort rates are obviously higher than rates at other hotels surrounding their parks (usually not more than 50% more), but that differential is not nearly as big as it is between DCL and its competitors.