First Look at Disney's 'Real' Lightsaber... and How It Works

May 4, 2021, 12:19 PM · For May the Fourth, Disney has given Star Wars fans what they've wanted for the past month - a look at that "real" lightsaber that Disney Parks Chairman Josh D'Amaro showed off at an online press conference last month.

Guests will get the opportunity to see Disney's practical lightsabers in person when the Star Wars: Galactic Starcruiser hotel opens at the Walt Disney World Resort next year, Disney said today. Here is the public sneak peek video that Disney just released.

If you are interested in how this device works, check out Disney's patent application for "Sword device with retractable, internally illuminated blade." For more patent insight, Disney also has a patent application for "Systems and methods for using a gyroscope to change the resistance of moving a virtual weapon," for that unique lightsaber "feel."

A visit to Disney World's Star Wars hotel will be a two-day, two-night interactive experience, simulating a space cruise on the Halcyon starcruiser. Part of your itinerary will include a "port call" to Batuu - the Star Wars: Galaxy's Edge land in Disney's Hollywood Studios. But another itinerary option will be the opportunity to learn "the ancient ways of the lightsaber" and face off against a training remote. That appears to be the place where you will get to see this new lightsaber design in action. 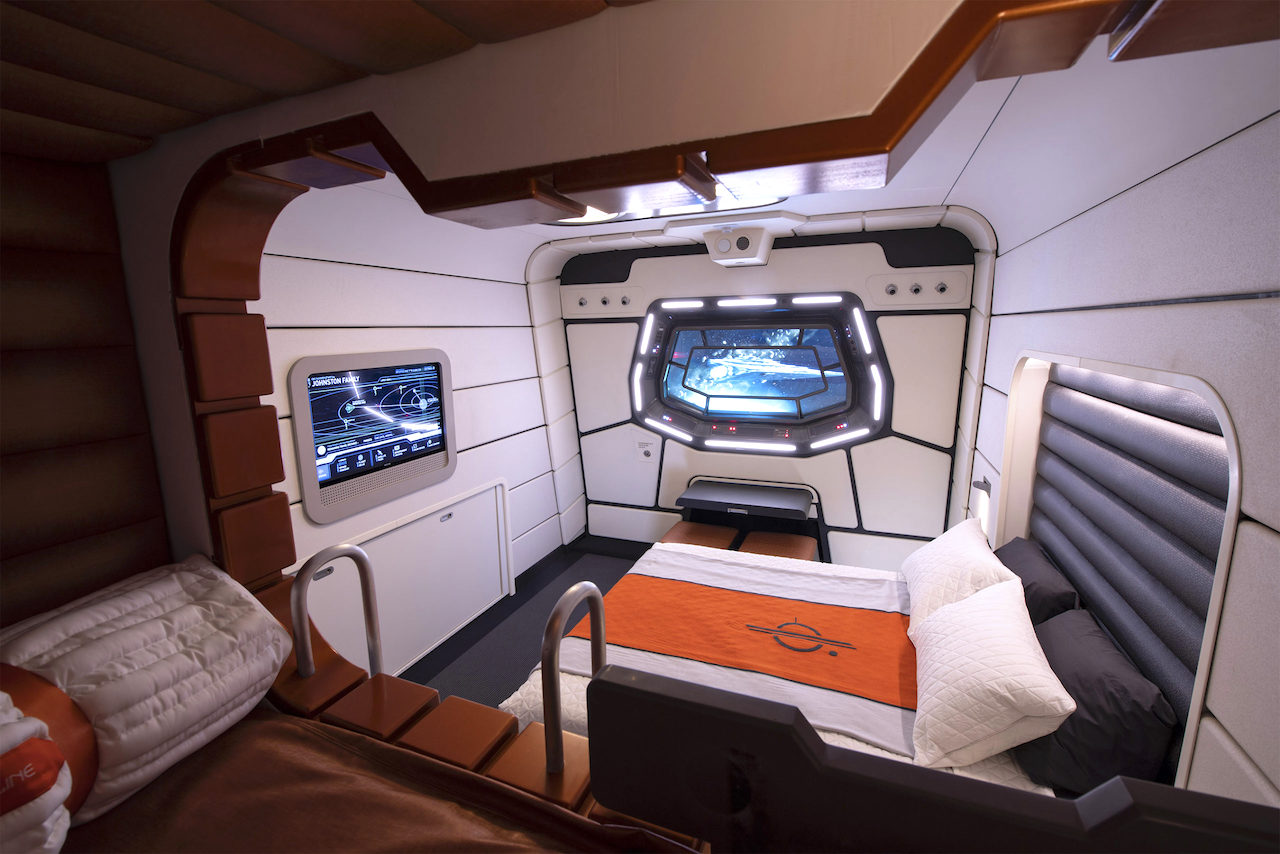 Windows in the Halycon's cabins and public areas will be screens meant to simulate views into space, completing the illusion that you're actually on a spaceship rather than inside a Walt Disney World hotel. Even the shuttle that takes you to Galaxy's Edge will use the animated windows.

Other activities on the Halycon will include a visit to the bridge, including instruction in the ship's navigation and defense... which may come in handy if something goes terribly wrong during your visit. Meals will be in the Crown of Corellia Dining Room, where "one night's dinner will feature a live performance from a galactic superstar who can captivate an entire room with the crook of her jewel-encrusted purple Twi'lek finger," according to Disney's press release.

A model of Halycon is now on display at Walt Disney Presents in Disney's Hollywood Studios. Disney has said that it will start taking reservations this year for the Star Wars: Galactic Starcruiser experience, which will debut next year, but we do not have official prices available for that yet.

If Savi's Lightsabers are $200, I can only imagine how much one of these beauties must cost. Though, if guests of the Halcyon get one as part of their package (or discounted upcharge), it might make those rumors of prices in the $1,000/person/night range actually worth it.

I LOVE my Savi's lightsaber (and collection of Kyber crystals to alter its appearance and sounds), but if I can own one of these, my son just got himself a hand-me-down.

Not sure if these will be quite ready for the public to take home yet. Seems like the mechanism is fairly complicated. But, then again, I never would have guessed that we could have our own BB-8 droids at home, so maybe we will get these new sabers someday.

I don’t think Disney’s lawyers will let guests take them home or even turn it on. As part of the six-thousand per person cruise, they might let you hold one for a little bit.

You’ll stab your eye out!

Just once I want to walk into the Cantina, sit down, order a drink, light my cigarette with this thing, and say "Screw the Empire".