Six Flags Great Adventure Scores with a Devil of a Ride

June 10, 2021, 10:45 PM · Advertised as the world’s tallest, longest and fastest single rail coaster, Jersey Devil got its name from regional folklore. The Jersey Devil is a mythical creature purported to dwell in the Pine Barrens of South Jersey, which encompass Jackson, the location of Six Flags Great Adventure. It seems only fitting that the park’s 13th coaster incorporates a local legend.

Standing 130 feet tall and featuring 3,000 feet of Rocky Mountain Construction’s raptor track, Jersey Devil operates with four trains accommodating twelve riders seated in single file. The configuration is such that riders straddle the rail, restrained by a lap bar and soft shoulder straps. Theming is abundant and elements include three inversions following an 87-degree drop. The coaster reaches a speed of 58 mph. 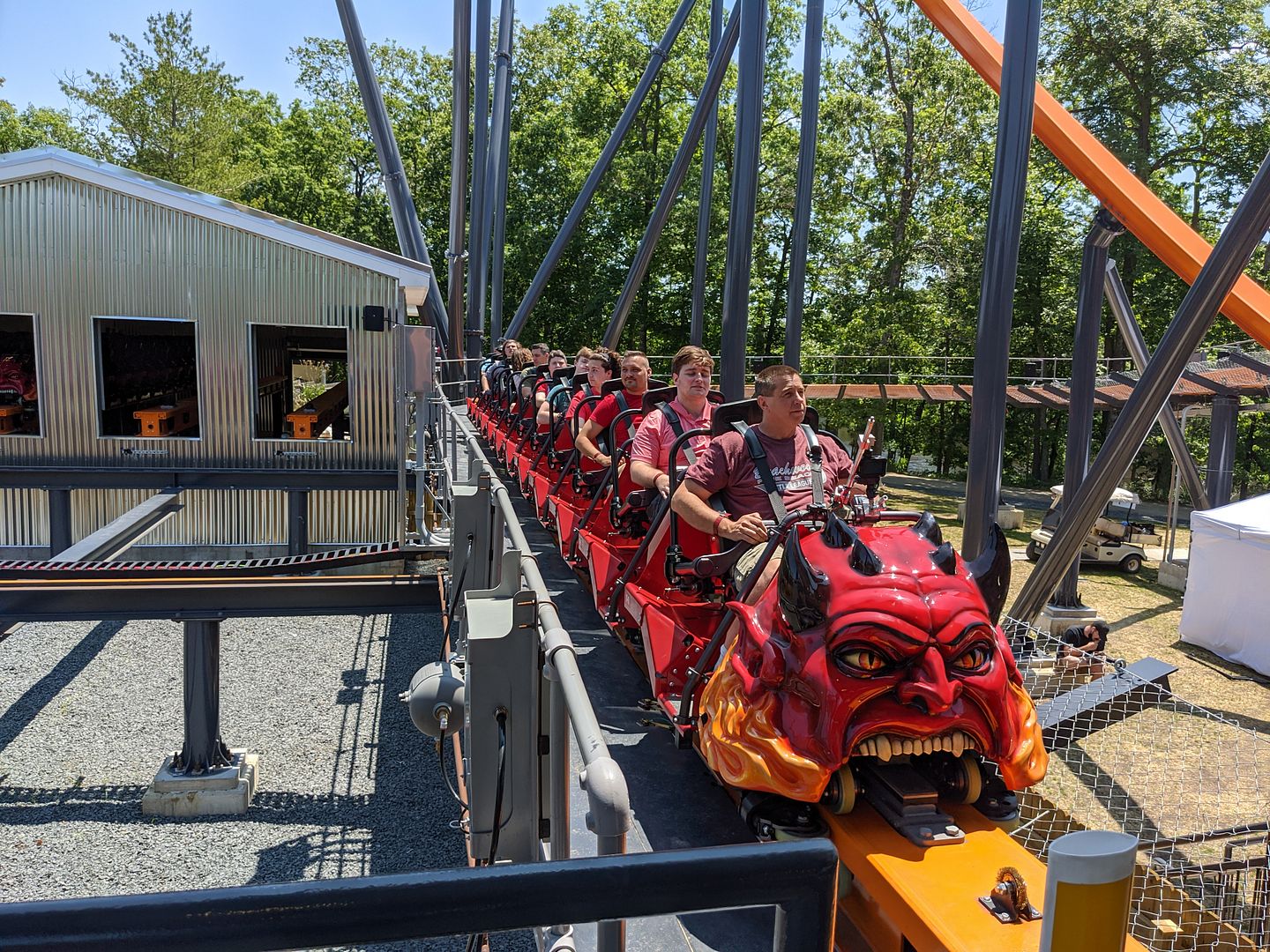 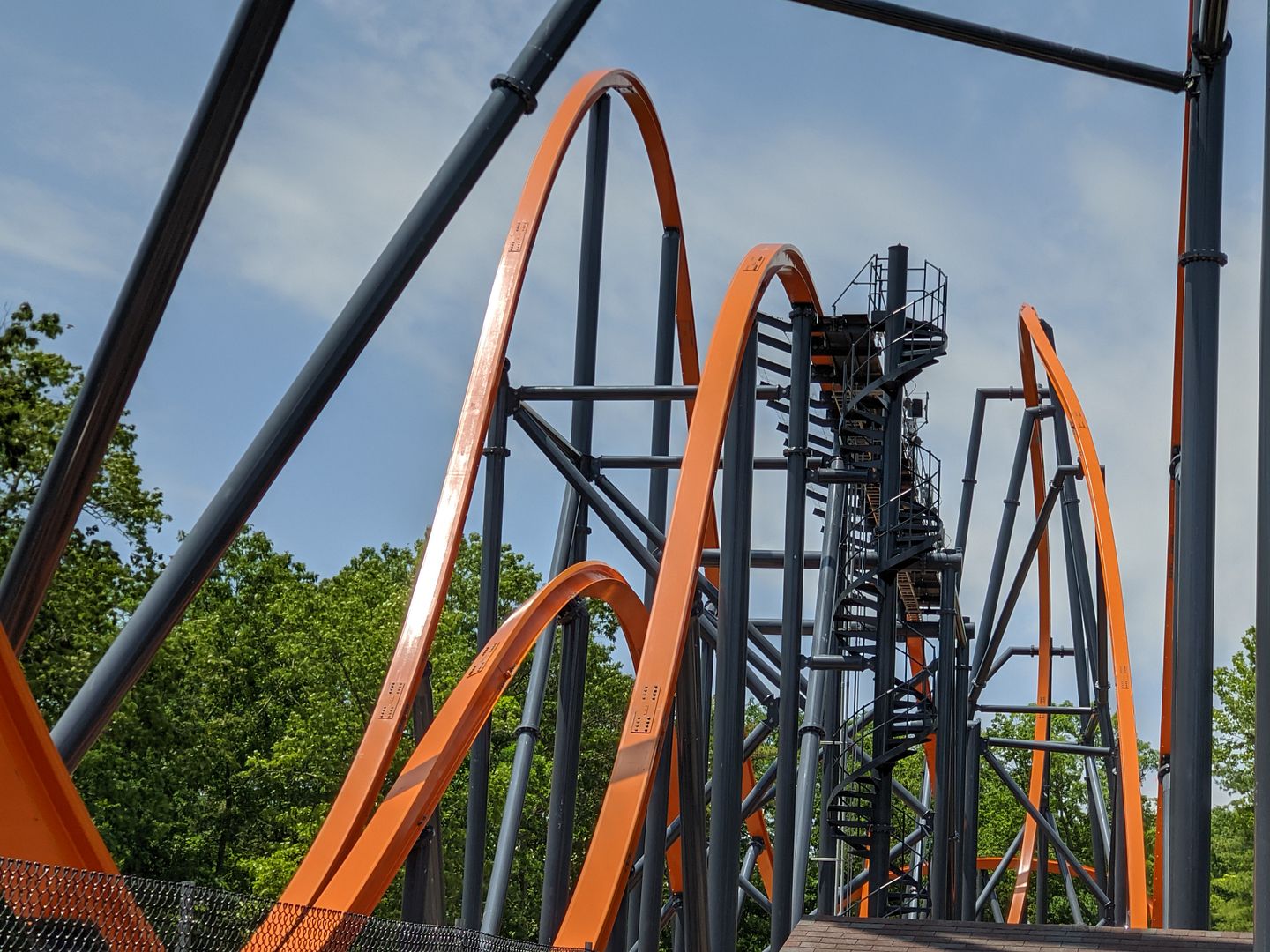 As to the ride experience, this was not my first time riding a single rail coaster. I’ve ridden Wonder Woman Golden Lasso Coaster at Six Flags Fiesta Texas, another RMC creation, and was interested to find out how Jersey Devil compares - but more about that later. Let’s concentrate on Jersey Devil. The first thing that differentiates it from most coasters – with the exception of wild mouse and similar rides - is that the train does not stop for unloading and reloading, so that riders must board while the train is in motion. This means that the ride ops have to be quick in pushing down the restraints. I must admit that at the age of 69, I had some difficulty stepping into the car on the first ride, as it’s necessary to step lively, although this resolved on subsequent rides. The train does stop when it reaches the bottom of the lift hill. From there it ascends 130 feet before plunging precipitously and the drop is nothing short of awesome. Equally awesome is the dive loop which follows. 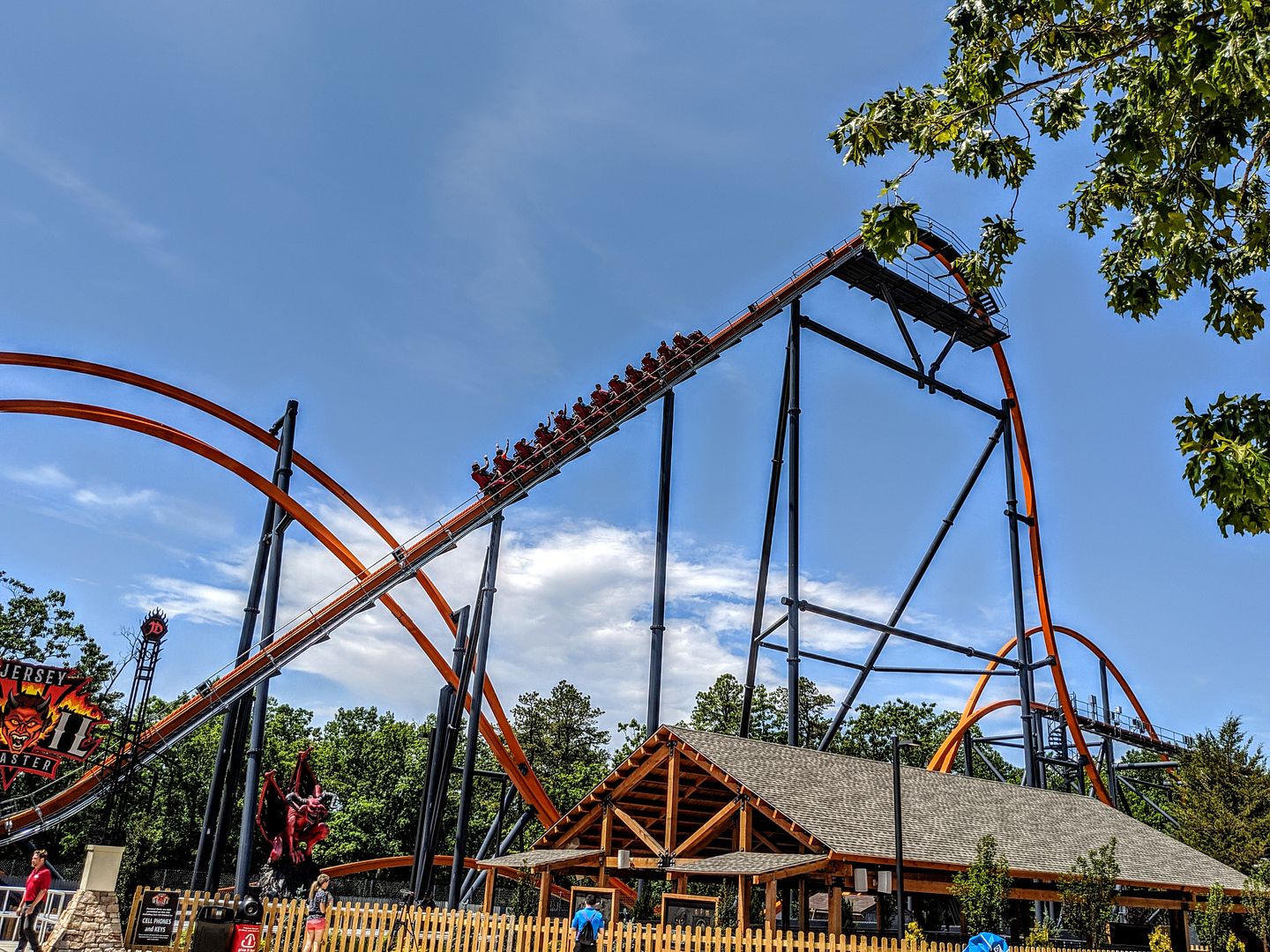 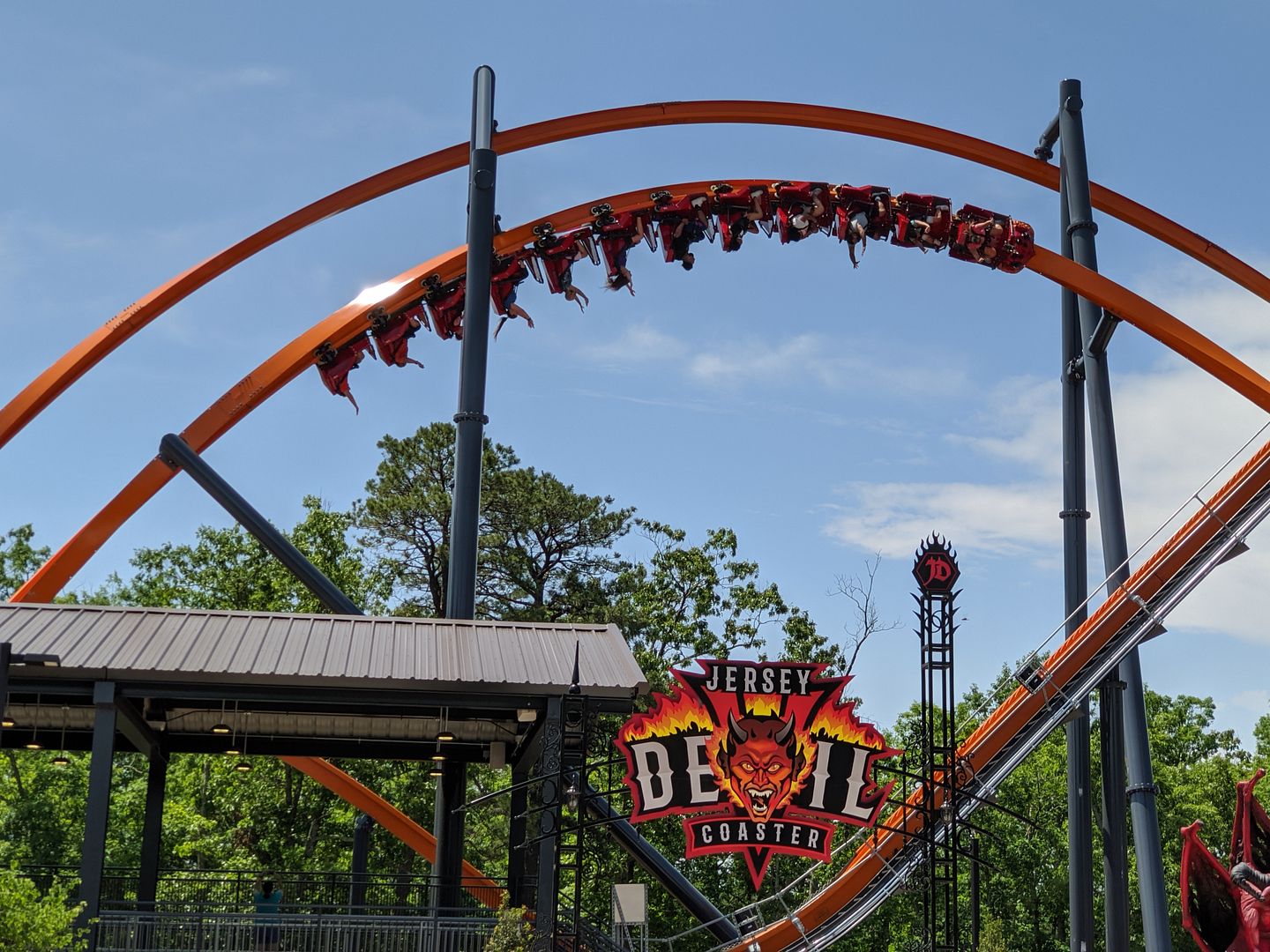 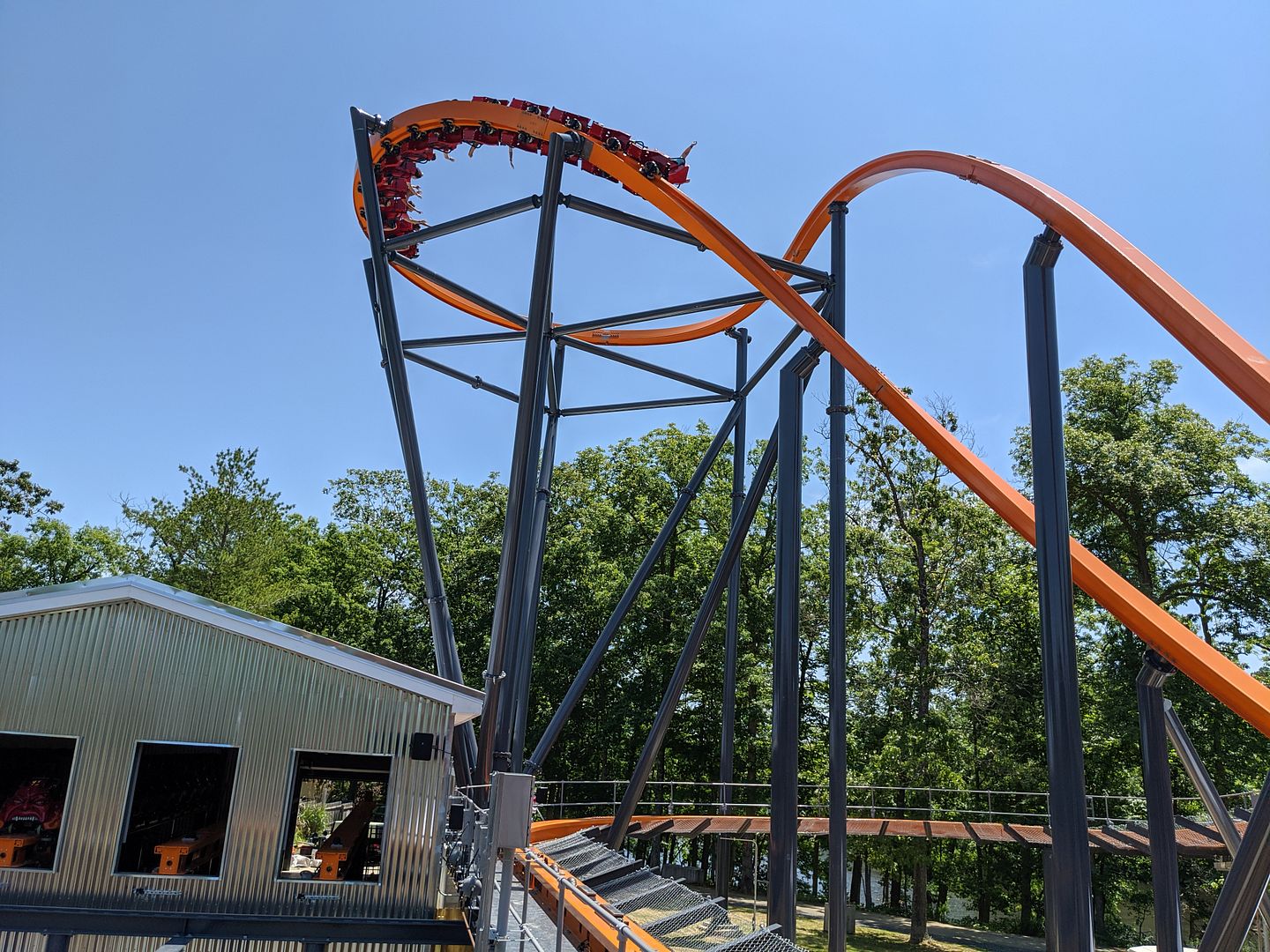 The ride features airtime hills – yes, there is airtime! – along with a number of twists and turns. I found the inversions delightful and especially liked the fact that the zero-g roll and zero-g stall are parallel to one another. It’s a pretty lively ride and I wouldn’t hesitate to call it exhilarating. I rode it twice in row one and once in row nine; I found the airtime and overall ride experience to be better in row nine. While it’s not a monster coaster like some others in the park, it offers enough thrills to be well worth riding.

And getting back to Wonder Woman, I think that Jersey Devil is the better coaster. It’s a later, more comprehensive model and a good fit for the park.

As a daily lurker, I want a TPI shirt

I'm a big fan of Railblazer at California's Great America, and hope to see the bigger model at Magic Mtn before long. Load sounds really good for JD. I was really worried about capacity on RB, especially since CGA ride ops aren't exactly renowned for speed and efficiency. I will state that the park has done a great job of getting their best people running RB, though, so they keep it moving. These ride are Really Fun!

As with many newer attractions at Six Flags Great Adventure, my biggest worry with this coaster is the line and efficiency of operations. Considering the limited capacity and the novelty of this ride being the only one on the East Coast, I expect lines to be slow moving and well in excess of 60 minutes on most days.

This does look like a fun and unique experience with oodles of airtime as one would expect from an RMC. However, there also appear to be a few jolts and sudden changes of direction that may be uncomfortable to some. I've noticed on just about every RMC I've ridden there's at least one of these unexpected jolts. I definitely look forward to riding this later this summer, but hope that the lines are not ridiculous to get a shot at taming this devil.

Looks like like a decent coaster but not enough to get me back there. The last time I went to this park was in 2018, I did 5 SF parks (including GADV) and they were all terrible experiences. From what i've been seeing in recent TRs they haven't gotten any better so I am still holding off on going back to any for now.

RE the capacity I was at Silverwood on Monday and Stunt Pilot had a pretty long line and that's at a small park in the middle of nowhere, so yea this will definitely get a very very long line.

By the way, here’s the link for the shirts: https://shop.spreadshirt.com/themepark/

I'm somewhat optimistic about throughput despite the limited capacity. Considering that Wonder Woman at Fiesta Texas has a capacity of 8 riders and one less train than Jersey Devil, I find JD to be an improvement. Even prior to loading, WW requires riders to stand in circles numbered from 1 to 8 whereas JD has a free-flowing queue. Fahrenheit at Hershey, like JD, has a capacity of 12 riders but takes much longer to load, resulting in long waits. It will be interesting to see what happens when JD is running all 4 trains. Yesterday only 2 were running and there was downtime, which was to be expected until they iron out the kinks. Comically, my 1st ride on JD was on the train without a camera. I said hey, where's the camera? and they put me on the next train. And Russell, you got that right about jolts & sudden changes of direction. For me this is one of the things that made the ride so much fun but I suppose it's not for everyone.

This exact model will be built at Magic Mountain for next year.

Thank you for sharing this wonderful ride information of the Six Flags Great Adventure is an amusement park in New Jersey. I think it's a very dangerous roller coaster but it's an enjoyable ride for adventure lovers. I love to play this roller coaster game online, As well as, I played lots of online games and win money. So I suggest those people who are interested to play money-making games, So you can Click Here to get parx sportsbook review and bonus code that can help you to make money by playing online games. Have a good day!

All Hail VelociCoaster, the New Queen of Thrill Rides