June 24, 2021, 11:58 PM · The Warner Bros. Studio Tour Hollywood reopens to guests Saturday, and the studio has made some big changes during the more than one year it has been closed.

The tour has moved across the street to a new building, topped by a multi-level garage that provides ample covered parking for tour visitors. It's a short elevator ride down to the tour's new lobby, which includes an expansive Warner Bros. Studio Store. The store is open to the public without purchasing a ticket to the Studio Tour. 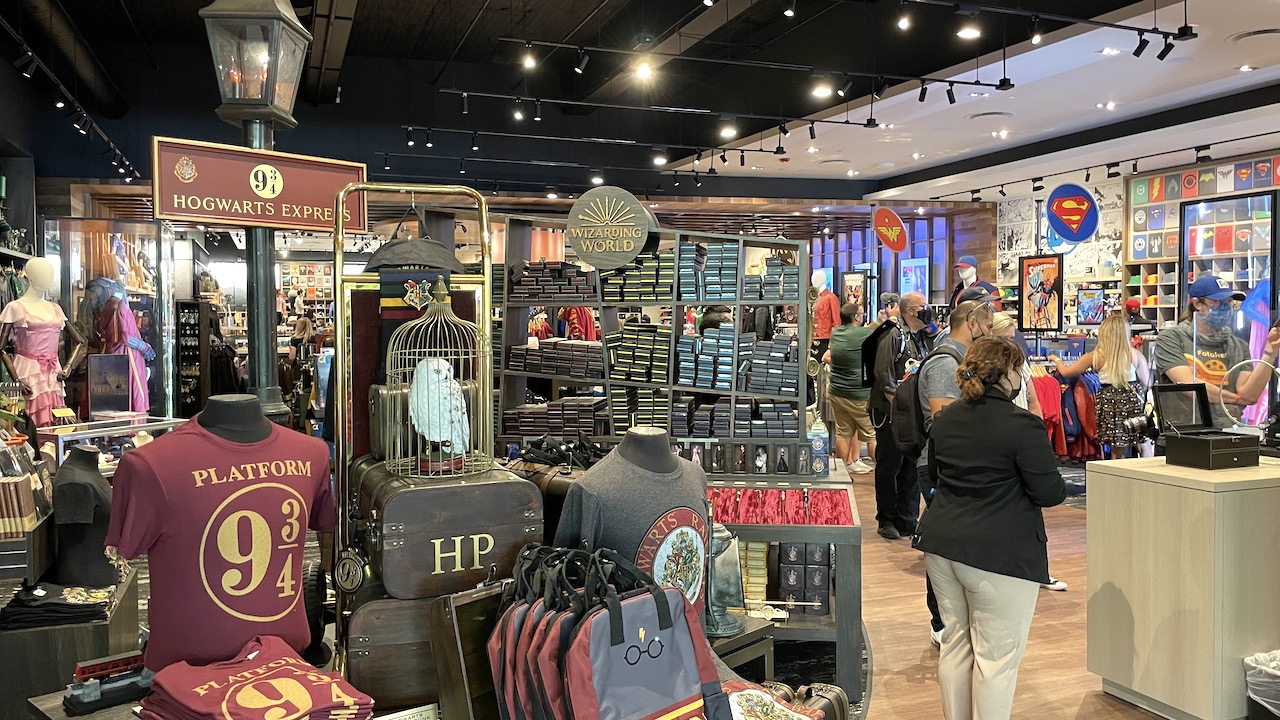 The tour itself kicks off in the new Storytelling Showcase, where exhibits provide an introduction to the nearly 100-year-old studio and an overview of its legacy.

From there, guests hop aboard the familiar trams for a ride around the studio's backlot with one of the tour guides. The hour-long trip takes visitors past many of the versatile outdoor sets on the lot and can include stops inside some of the famed Warner Bros. sound stages, depending upon production schedules.

Along the way, trams will stop at the tour's Stage 48: Script to Screen walk-through experience, which guests can take in at their own pace. Additions to Stage 48 include an iteractive video demonstration of Foley sound effects and a DIY automated dialogue replacement [ADR] booth. Here's your chance to record your voice over Daniel Radcliffe's in a Harry Potter scene. 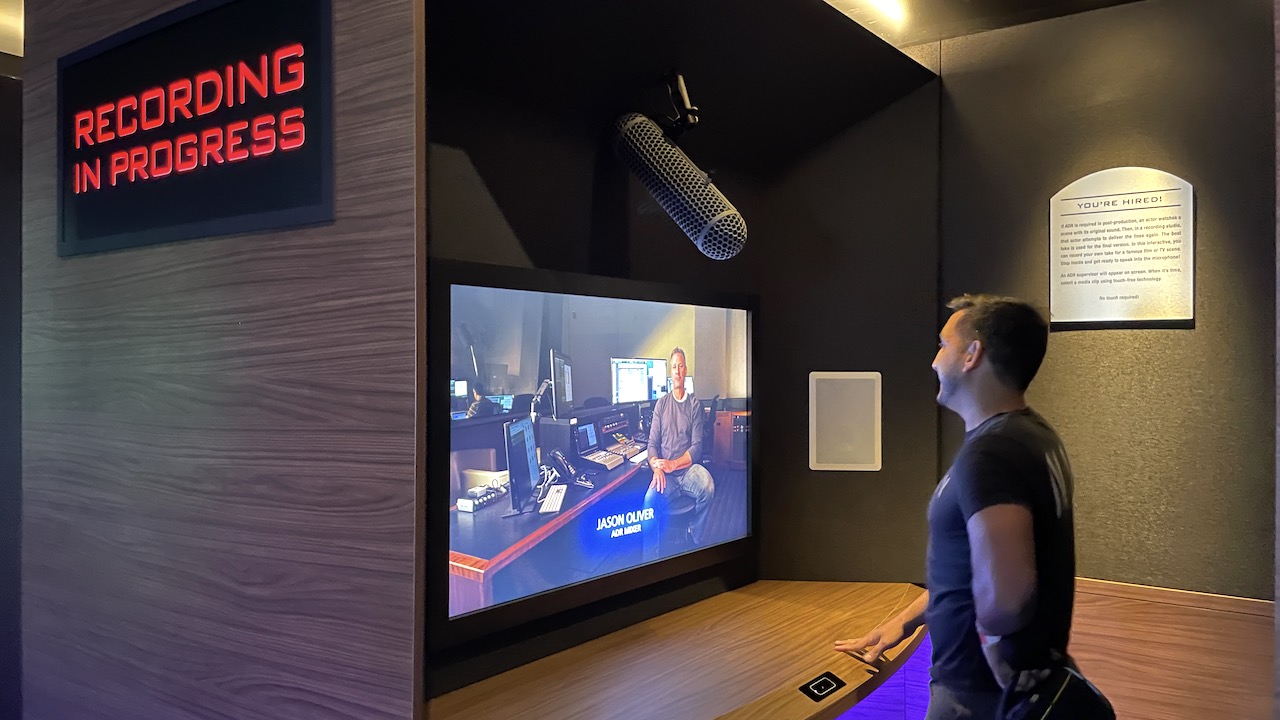 But the big change at Stage 48 is the expansion of the Central Perk Cafe and the transformation of the former gift shop into the Friends boutique. The expanded menu includes corned beef melts, pizza wedges, hot dogs, fries, and an assortment of salads, hot and cold sandwiches, and Central Perk coffee with new Friends character-inspired beverages. Desserts include New York style cheesecake, Central Perk cupcakes, and Rachel's Thanksgiving trifle (without the meat). 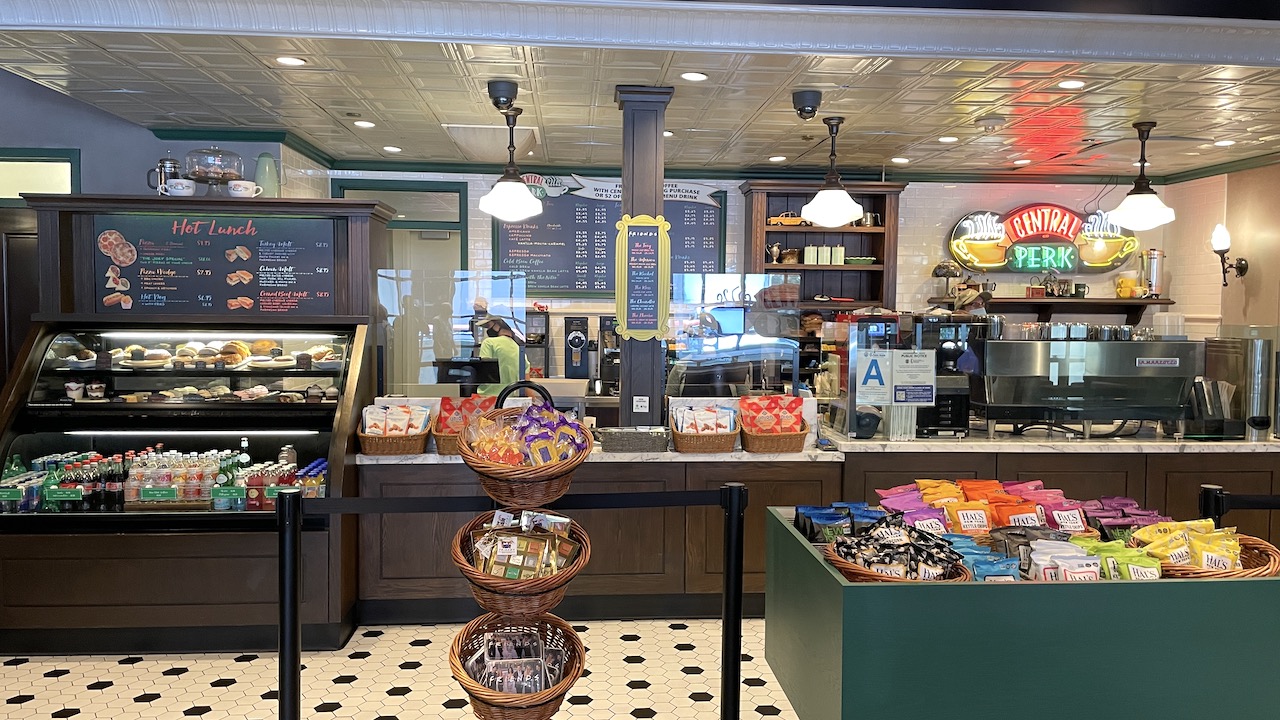 Once you've gotten your food, guests are welcome to step over into the Friends boutique and eat on the famous Central Perk couch, or in Monica's kitchen, the living room, or Joey and Chandler's apartment. For today's press event, Warner Bros. welcomed Maggie Wheeler, who played Janice on the sitcom, back into Monica's kitchen to talk about her time on the show as well as the new exhibit.

After you're done at Stage 48, it's back on the next tram for a return trip to the main building for the tour's new finale, Action and Magic Made Here.

The walk-through includes props, costumes, and photo ops of recreated sets from DC super hero and Wizarding World films. DC displays include Jared Leto’s Joker and Margot Robbie’s Harley Quinn costumes from Suicide Squad, the Lasso of Hestia from Wonder Woman 1984, the Batmobile from Tim Burton’s original Batman, the Tumbler from The Dark Knight, and the Batwing from Batman v. Superman. On the Harry Potter side, you can crawl into Harry's bedroom under the stairs at Number Four Privet Drive, whip up a brew in a Potions class, learn to duel with wands and even take part in the Hogwarts Sorting Hat ceremony. The tour concludes with a final treasure room that includes some of the studio's Emmy and Oscar awards.

Studio tours, including Warner Bros.', long have provided Los Angeles area residents a convenient place to steer visitors who wanted to "see Hollywood." (Unless you don't like said visitors, in which case you would direct them to the actual Hollywood.) But much like movies about the movies, studio tours are Hollywood productions about Hollywood production. If a studio tour faithfully recreated the process of making a movie, you would be sitting around for weeks watching a bunch of bored-looked people film short scenes that look nothing like a motion picture, following by months in a darkened room watching other people hunched over computer monitors transforming that raw video into what you eventually will gawk at in a theater.

The new Warner Bros. Studio Tour recognizes that what movie fans actually want is a closer connection to that movie magic. On the tour, you not only can see for yourself the sets where beloved movies and TV shows were filmed, you can now insert yourself into iconic scenes through the abundant photo ops on Stage 48 and the Action and Magic Made Here finale. Yes, if you want to learn a bit about how this stuff gets made, your tour guide shares insight, and the Stage 48 exhibits provide an engaging overview of the basic steps. But Warner Bros. understand that most fans are going to take selfies with their Central Perk cups on the Friends couch instead.

So it delivers. Heck, with the Sorting Hat, dueling, and potions class interactions, Warner Bros. Studio Tour Hollywood comes through with some of the experiences that Harry Potter fans have been asking of The Wizarding World of Harry Potter at Universal Studios Hollywood, less than three miles away. The attractions complement one another nicely, should you be looking for an extra helping of magic on your next trip to southern California.

Tickets are available online for $69 for adults (ages 11 and up) and $59 for children ages 5 to 10 at wbstudiotour.com. Advanced reservations are required.

Bonus: Warner Bros. brought Wonder Woman director Patty Jenkins to the tour lobby to talk about the changes on the tour as well as a bit about the making of the Wonder Woman films.

Wait, the WB Studio Store is now open to the public?! Hey Disney, you should open your Disney store at the Studio lot to the public(Especially since Disney Stores across the country are being shut down).

So, in addition to a $69 admission and numerous upcharges at the end, this tour is now going to dump guests at a cafe for 15 minutes in the middle to mull around trying to entice them to buy some food. I despise tours that do this by using bathroom breaks and planned stops to get customers to open their wallet for food/drink during a tour. It's one thing to have a snack bar or restaurant at the beginning or end of a tour, but to take advantage of the captive audience by dumping them into a restaurant for a planned stop on a tour is exploitative.

Some of the new "experiences" at the end of the tour (Sorting Hat, Wizard Duel, and others) sound cool, but will guests be able to experience them without being coerced into purchasing photos? When we did the WB Tour in 2019, some of the employees were extremely aggressive in selling the upcharge photos, and there were roaming employees ensuring that no one was snapping pictures with their personal cameras of the sets, even if they weren't taken from the prime angle of the studio's setup (especially important for the Hobbit's forced perspective sets or the Harry Potter green screen set). While you could participate in the activities without purchasing the photos, some of the employees running the stations made it pretty clear that you shouldn't step up if you had no intention of purchasing a photo at the end. Even the photo-op with the Oscar was odd because the employee would let kids hold the statue for a quick photo, but if an adult wanted to hold it, they had to pay an upcharge. It was a very awkward situation that just left me with a bad taste in my mouth about the experience, on what was generally a good studio tour. With such a high "get in" cost, you would think WB would not need to sift more money from guest's wallets with all of these upcharges.

FWIW, I believe this tour is still part of the Go LA Pass which also includes USH admission if you get a 3, 5, or 7-day pass. Also, there's free 3-hour street parking on West Riverside Drive, which is an easy walk to the tour entrance, for those that don't want to pay to park in the garage.

I’m old enough to remember when the Universal Studios Tour emphasized the movies created on the lot and the movie making process, as opposed to these days, when it’s all about the rides and the photo ops; that’s why I was so happy to take the WB Studio Tour years ago, when the tour groups were small, they ran you around the lot to various locations and sets, and the emphasis was on film history and the movie making process. I’m disappointed to see WB has retooled their tour to make it more about photo ops and retail, too. I guess I’ll have to visit Sony or Paramount for their tours, or wait for the Academy Museum to open.

Disneyland Has Recalled Less Than Half Its Cast