Avatar Is Coming to Another Disney Theme Park

September 15, 2022, 6:34 PM · Walt Disney World opened its Pandora - The World of Avatar land at Disney's Animal Kingdom in May 2017 [Walt Disney World soars to new heights with Pandora - The World of Avatar]. Since then, Disney has bought 20th Century Fox, giving Disney greater control over the Avatar franchise, which will be bringing its long-awaiting sequel, Avatar: The Way of Water, to theaters later this year.

But Disney has not moved to bring Avatar to another one of its theme park resorts around the world. While Disney has not revealed plans to duplicate Florida's Pandora land elsewhere, this month it will be bringing Avatar to Shanghai Disneyland in the form of a six-month, immersive exhibition.

Avatar: Explore Pandora will open September 22 in Shanghai Disneyland's Tomorrowland, welcoming guests from 10am to 5pm daily through March 2023. Produced by Disney Location-Based Experiences with James Cameron and Jon Landau’s Lightstorm Entertainment, the exhibition recreates Pandora through a 1,400-square-meter environment, highlighted by a six-meter tall Tree of Voices. 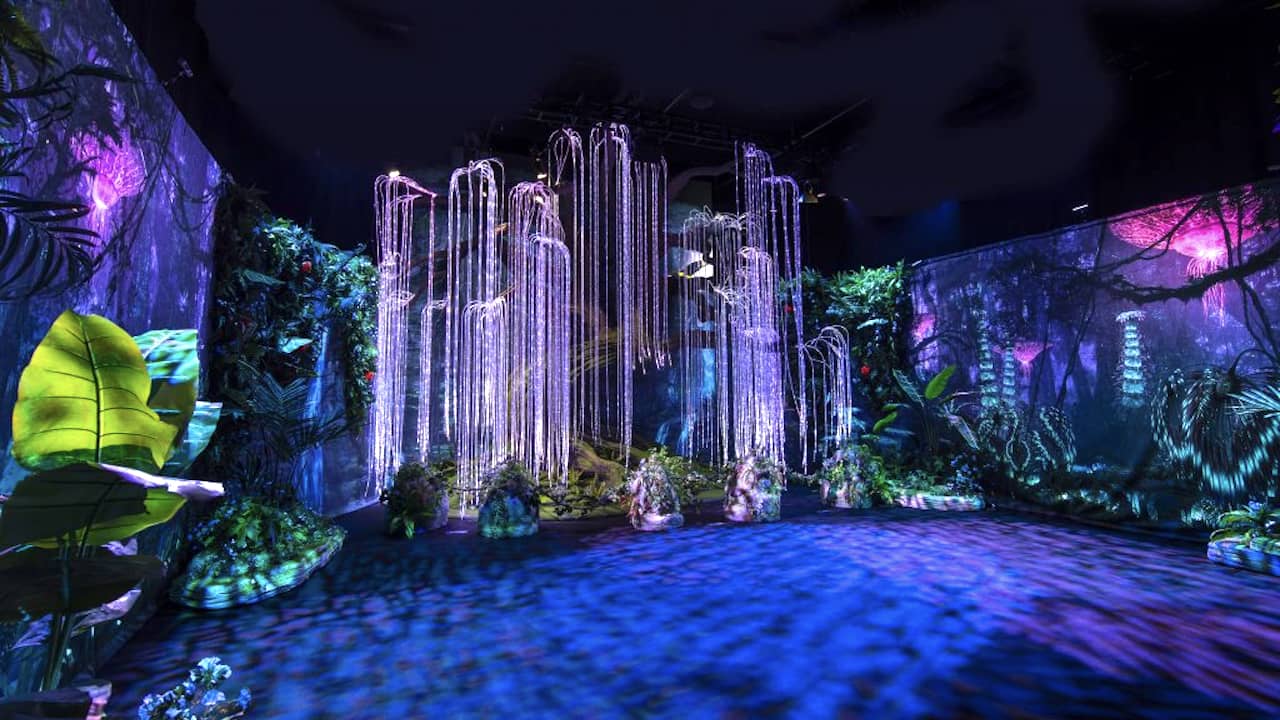 As suggested by the photo above, the exhibition will recreate the bioluminescent environment that has made Disney World's Pandora land so compelling in the evenings. Others sites in the exhibition will include the Amplified Mobility Platform (AMP) suit simulator, sculpts of mountain banshees and other creatures, as well as an interactive opportunity to be "Avatarized."

And, yes, there will be plenty of merch for sale, too, including Na'vi plush and "adopted" Banshees.

"and boy, we'd love if y'all come see our film this winter!"

On the flip side of that coin I’m actually pretty excited to go back to that world. Take my damn money already Mouse! (Shakes fist at sky and opens wallet in supplication)

My guess is that WDI hasn't figured out a way to weave an Avatar land/attraction into a Disney park in Asia, where the original film is immensely popular. Given the rerelease of the original film and coming sequel, this temporary installation is probably being used as a test to gauge how popular Avatar would be in the parks and if it would be worth it to wedge the IP into one of the Asian parks.

"Avatar: Explore Pandora" is new in Shanghai, but was in Chengdu in April 2021 [1]. It looks to be the same as the "Avatar: Discover Pandora" traveling exhibit which I visited in Taipei in 2017 [2] -- based on the list of attractions. There's a third name, "Avatar: The Exhibition," which shares the logo and has a blank website [3]. (It lists Lighstorm, 20th Century Studios, Cityneon and Victory Hill, but not Disney.)

The IP was licensed by Lightstorm and 20th Century Studios, but I surmise the construction, beast-sculpture and interactive elements were by "Beast Kingdom" (for "Discover Pandora") and "Cityneon" (for "Explore Pandora).