November 4, 2022, 11:14 AM · Over the past 10 years, Universal Orlando has been growing its footprint in Central Florida as the success of its theme parks - primarily driven by the popularity of the Wizarding World of Harry Potter - has spurred expansion of the resort. In addition to a new water park (Volcano Bay), Universal has added five new hotels supplementing the original three on-site resorts (Hard Rock Hotel, Portofino Bay, and Royal Pacific), with more anticipated when Epic Universe debuts in 2025.

On our recent trip to Central Florida, we spent a night in one of Universal Orlando’s newest hotels, Dockside Inn and Suites. Opening at the end of 2020, Dockside marks the completion of the Endless Summer Resorts (Surfside Inn and Suites opened in the summer of 2019), located across I-4 from the rest of the current hotels and theme parks, which is a similar distance from the future location of Epic Universe.

Like the other hotels at Universal Orlando, Dockside Inn and Suites is managed by Loews. Universal’s Endless Summer Resorts represent the company’s biggest investment into more reasonably priced lodging, with rates that are competitive with nearby chain hotels such as Hampton Inn, Doubletree, and Hyatt Place/House. The introduction of these new hotels gives Universal three tiers of hotels that are somewhat analogous to the Value/Moderate/Deluxe resort levels offered at Walk Disney World with Dockside/Surfside comparable to Disney’s “Value” resorts (Pop Century, Art of Animation, and All-Star Resorts). While all of Universal Orlando’s resorts are typically priced lower than their Disney counterparts (with the unmatched perk of Unlimited Universal Express given to guests staying in the deluxe resorts – Hard Rock, Portofino Bay, and Royal Pacific), Dockside and Surfside are the first Orlando theme park resorts that are priced in line with (and sometimes cheaper than) value-priced off-site chain hotels.

So, how does Universal’s most competitive foray in the Orlando hotel market measure up?

Universal’s Dockside Inn and Suites is divided into two massive three-winged towers featuring more than 2,000 rooms. Each tower has its own pool and adjacent parking garage ($15/night) and share a central lobby/reception building with a sizable gift shop, Starbucks, and quick serve restaurant (Pier 8 Market). 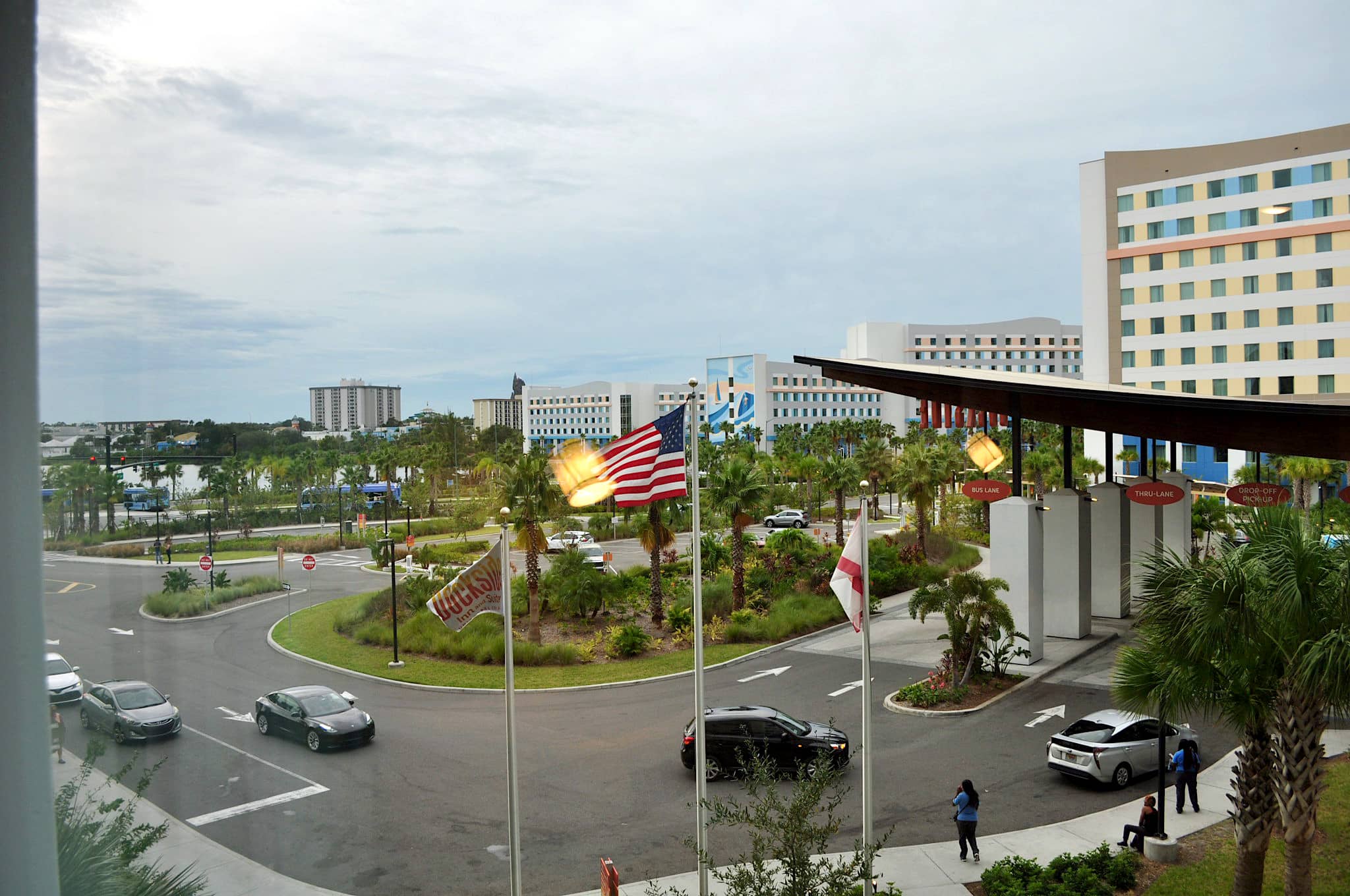 The design of the resort is generally compact given the number of rooms (unlike expansive properties like Caribbean Beach or Coronado Springs), but guests could still find themselves taking long walks getting to and from different parts of the resort - like to the park buses, parking areas, and Pier 8 Market - depending on where your room is located. However, unlike WDW’s value and moderate resorts, all the rooms at Dockside (and Surfside) have interior carpeted hallways with covered exterior hallways linking buildings/wings. That gives Universal’s resorts a more luxurious feel to its Disney Value counterparts and more in line with the off-site hotels immediately around Universal Orlando.

When we booked our stay at Dockside, we reserved a standard room, which features two queen beds. However, we were surprised to find ourselves in a two-bedroom suite when we entered our room following a day at Volcano Bay. 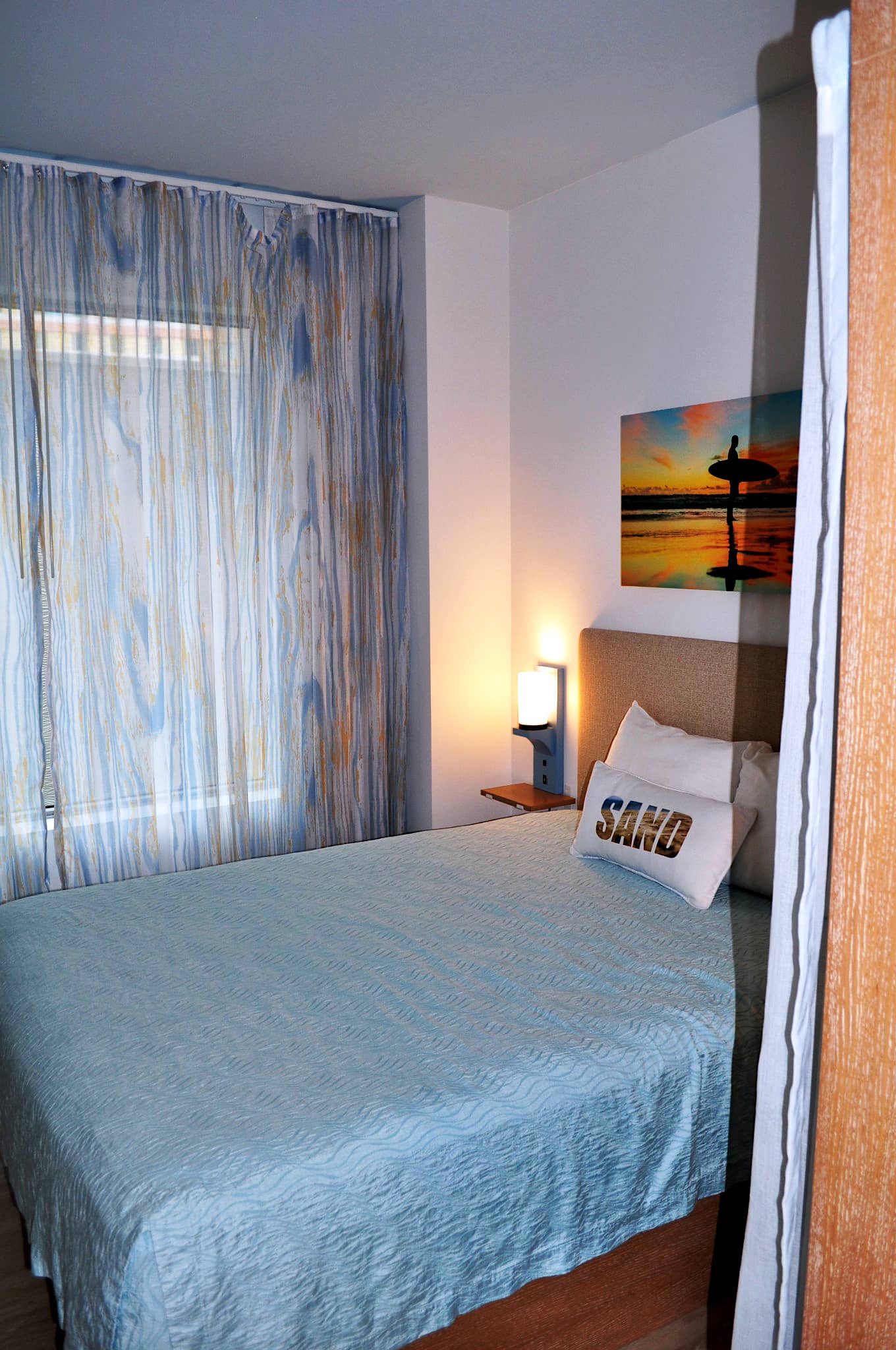 The layout of the two different room types is pretty similar, with just with a small kitchenette (with sink, microwave, and dining table) and second bedroom added to the suite. 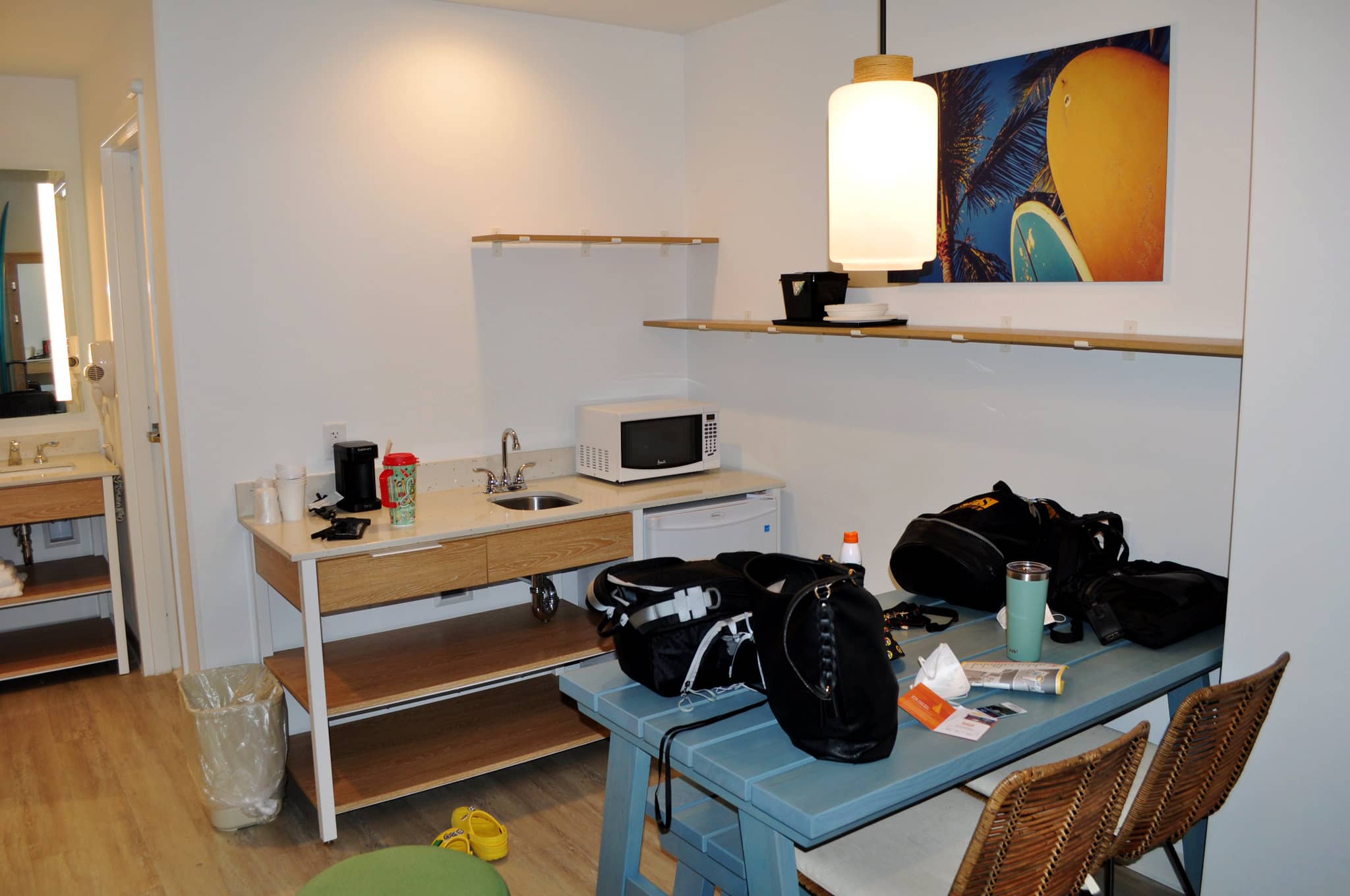 The styling of the rooms feature generic beach theming (more nods to the East Coast than West Coast) with hard laminate flooring throughout. 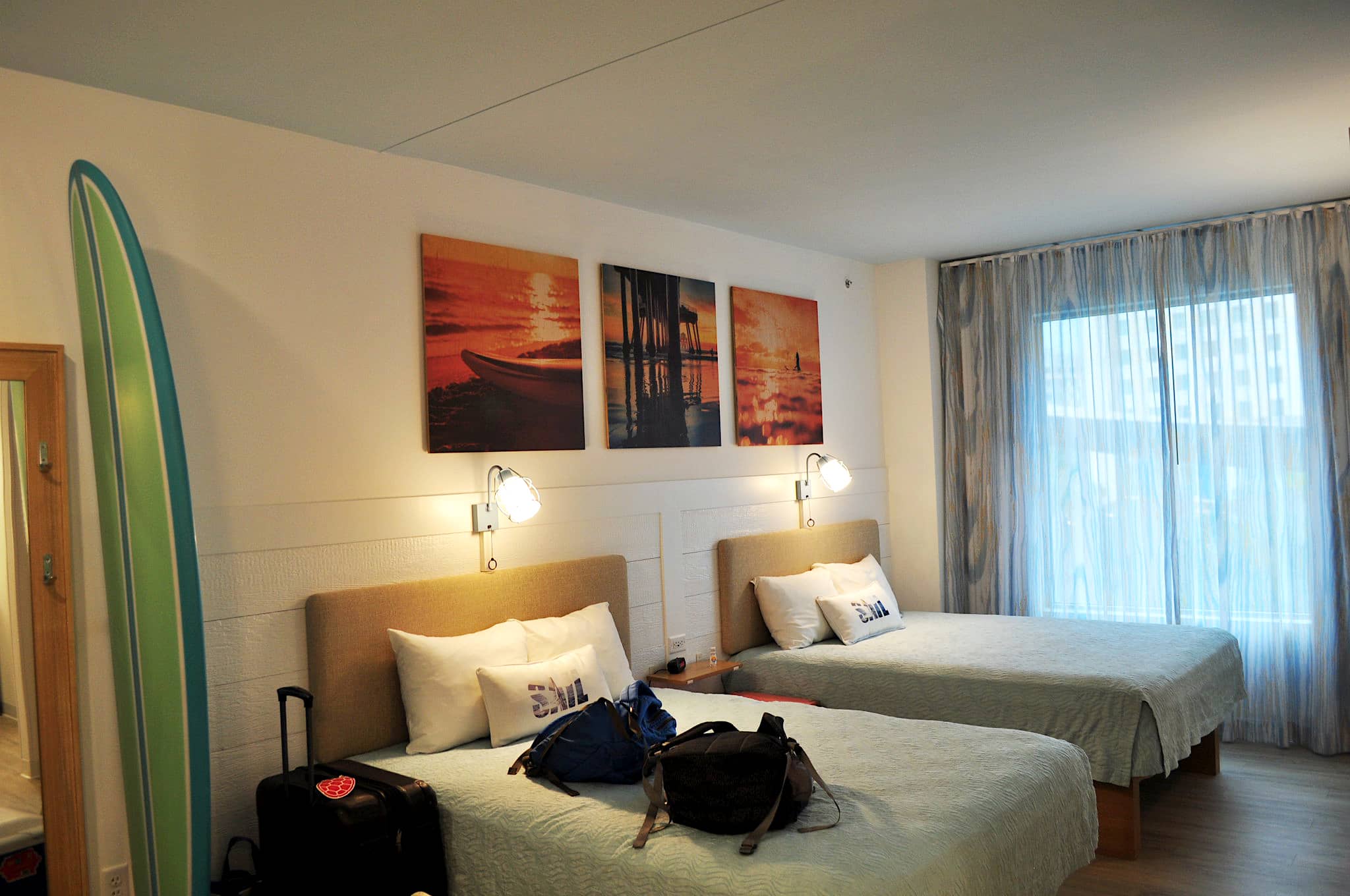 I’m still mixed about the industry’s increasing reliance on hard floorcoverings since they can be cold and hard (both on the feet and the overall ambiance of the room), but WDW has similarly removed most carpeting in their Value resorts, and it’s certainly easier to clean and maintain a hard floorcovering over carpeting. 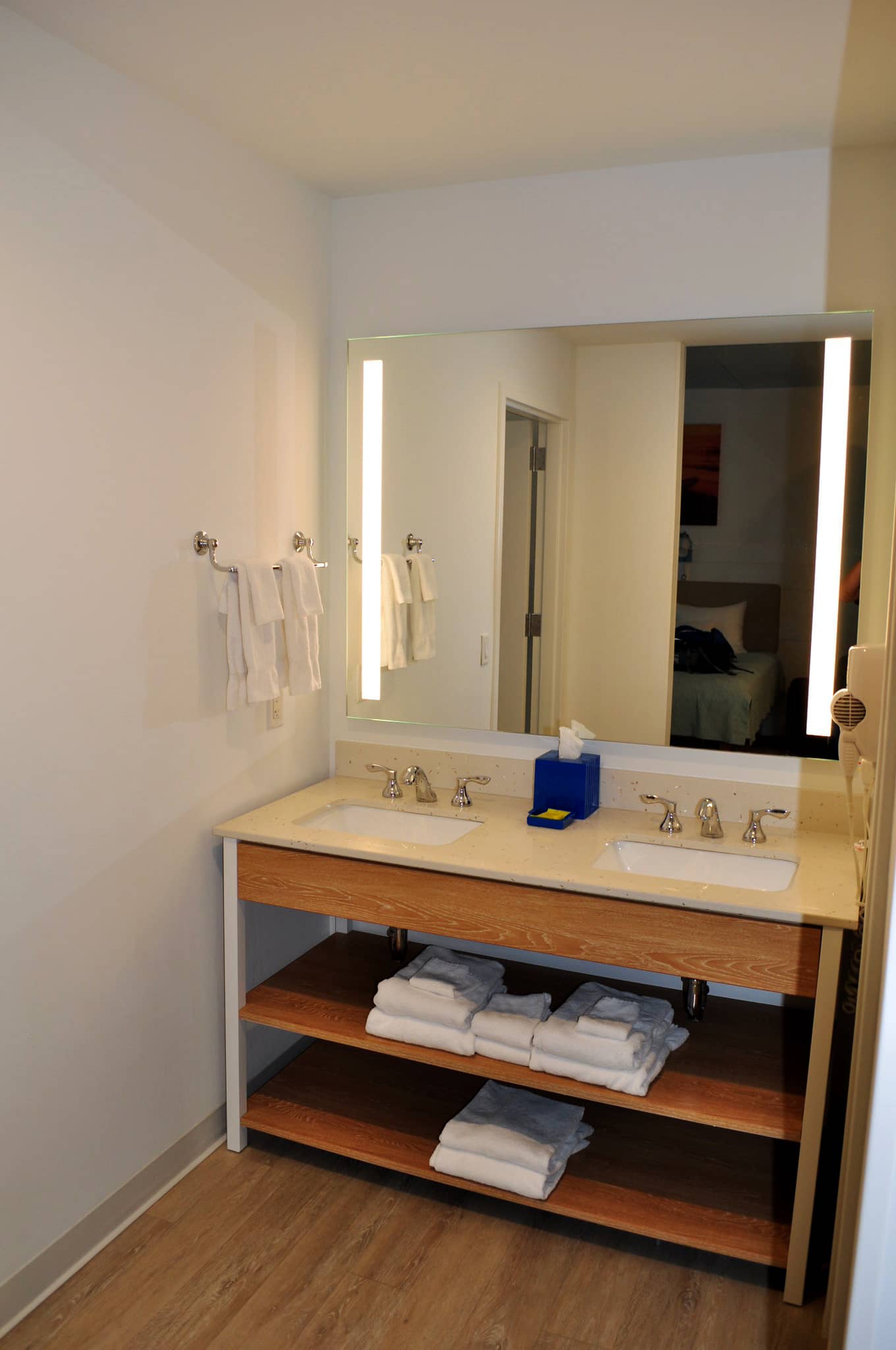 Being a newer hotel, Dockside rooms are equipped with plentiful USB plugs and modern flat-screen televisions (standard rooms have one TV, while suites have two), though the TVs did not have a sleep timer – a feature we commonly use. There are some clever design elements in the room, including small shelves throughout the bedroom and kitchen areas - perfect for those refillable cups, wands, cameras, and other smaller items you want to keep out, so they’re not forgotten on your way to the parks. There are also clever spaces under the ends of the bed frames to tuck away your suitcases if your stay is long enough to warrant unpacking into the dresser drawers and wardrobe. We did not notice any excessive noise from neighboring rooms over our one-night stay, but with the hard floors, ample hard surfaces, and vaulted ceilings, the room did have a bit of an echo.

The generic surf theme extends to the rest of the resort, but it’s relatively subdued compared to WDW’s Value resorts, which I would describe as loud and borderline gaudy. The pools are very nice with a more natural curvy shape than you find in the generally rectangular pools found at WDW Value and Moderate resorts. Like other theme park hotels, the pools have a daily schedule of activities, plenty of lounge chairs, and poolside bars for guests wanting to spend time relaxing away from the theme parks. 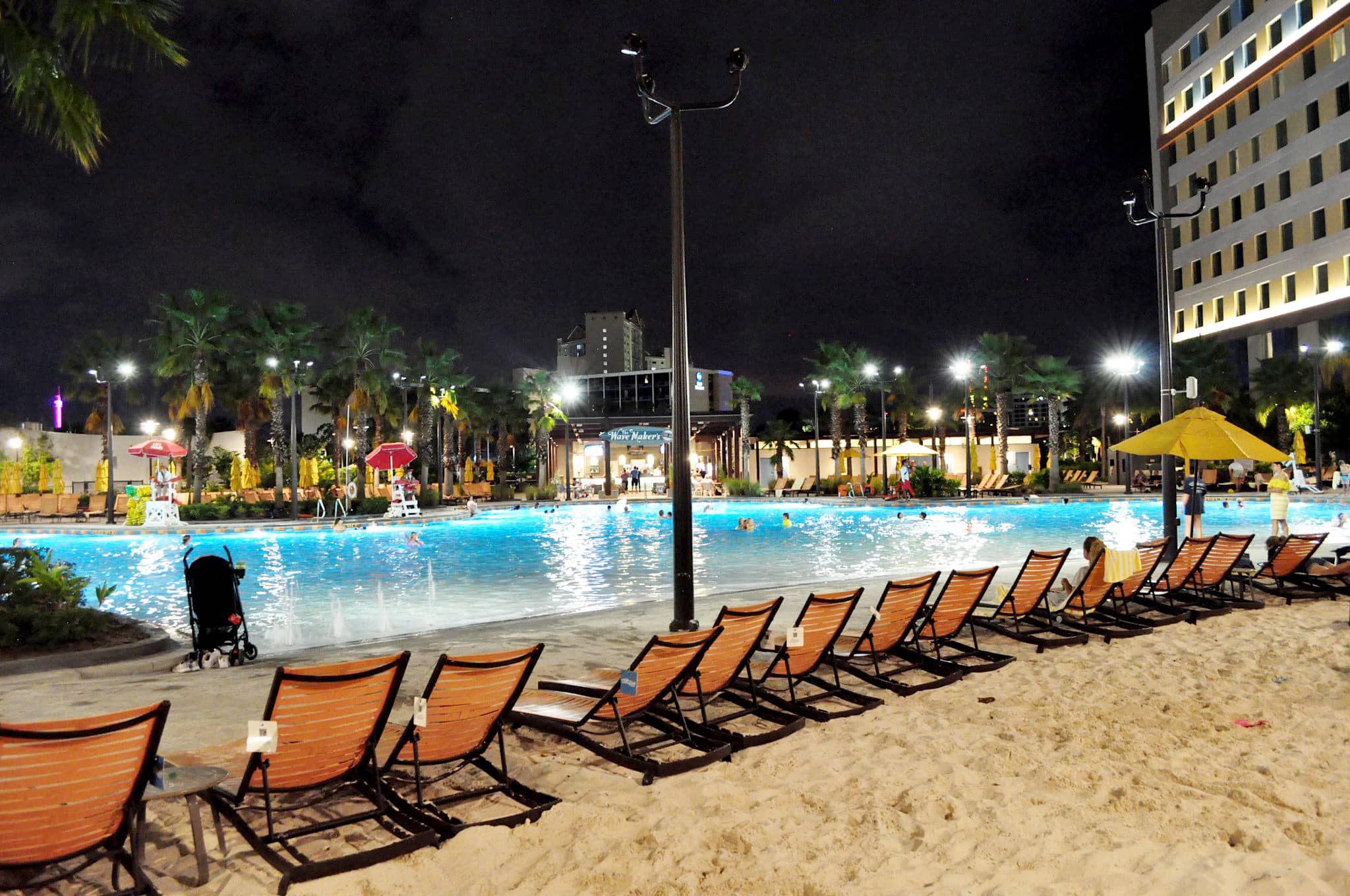 Dockside’s main lobby is cozy with lots of different seating areas around a super-sized Starbucks. 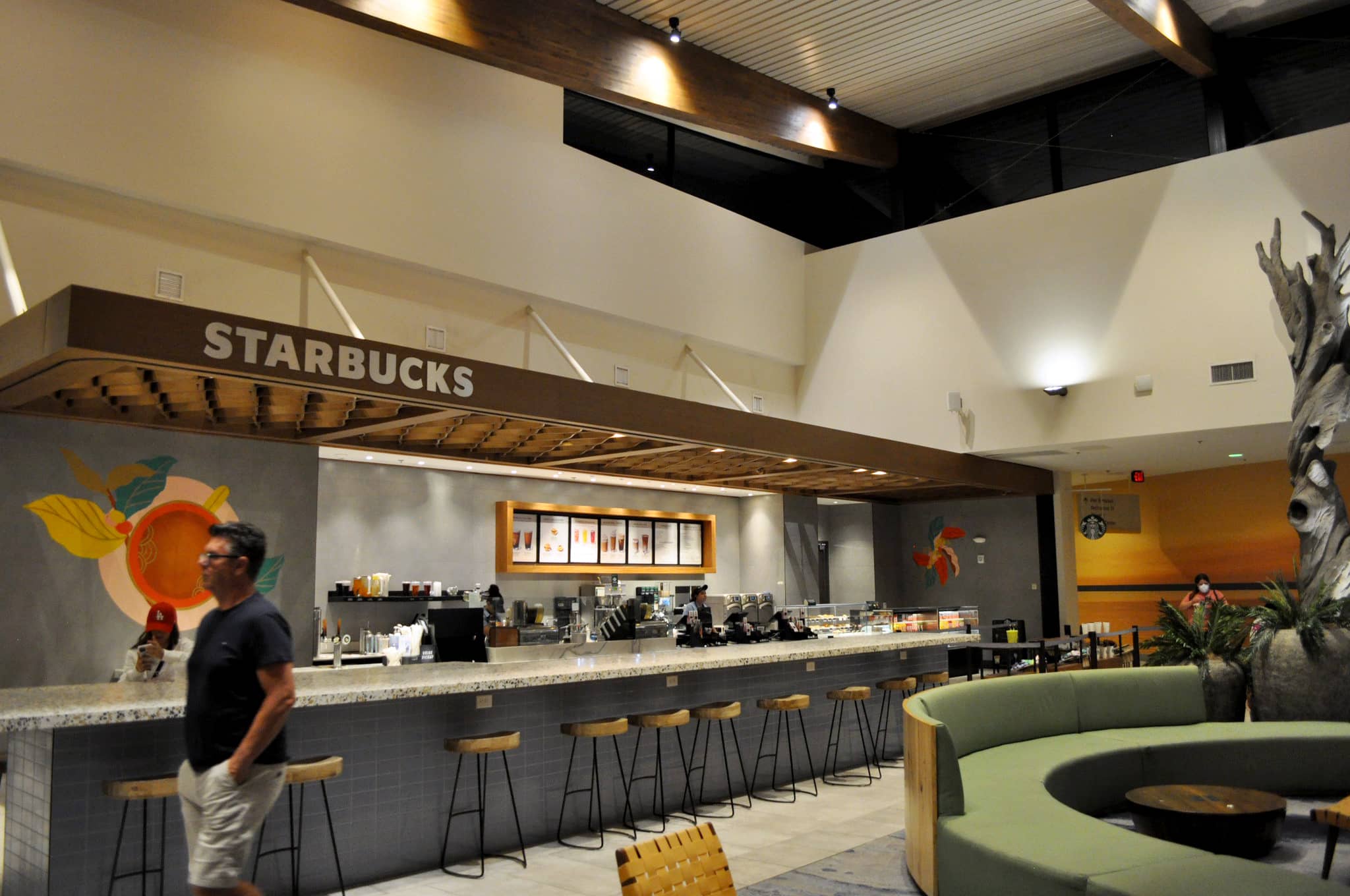 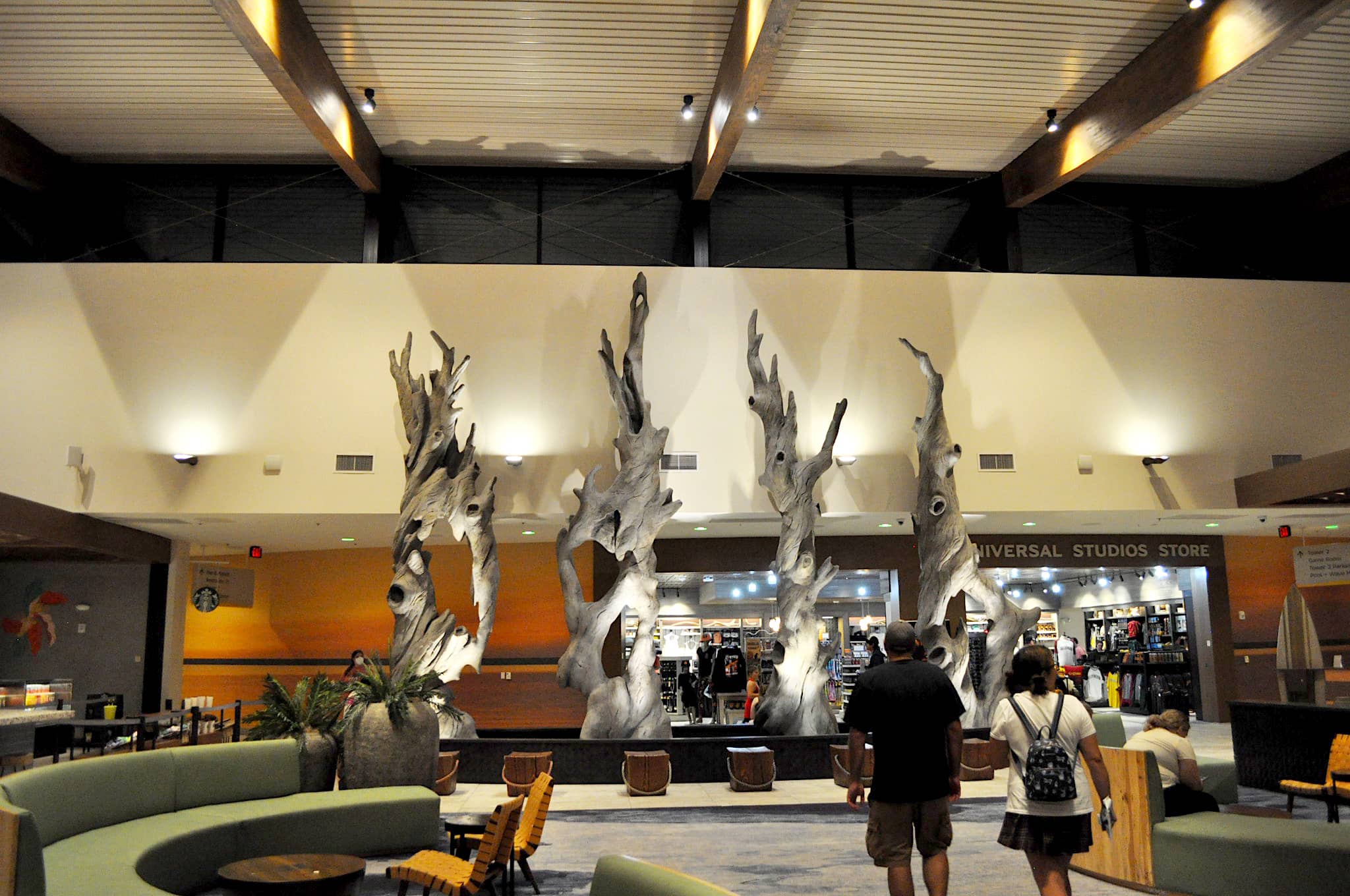 While we didn’t dine at Pier 8 Market, the cafeteria-style eatery looked pretty similar to counter service options you can find at WDW Value and Moderate resorts. However, if Pier 8 doesn’t meet your needs, there are a number of restaurants within a reasonable walking/driving distance, most located along International Drive, with CityWalk a short bus ride away. 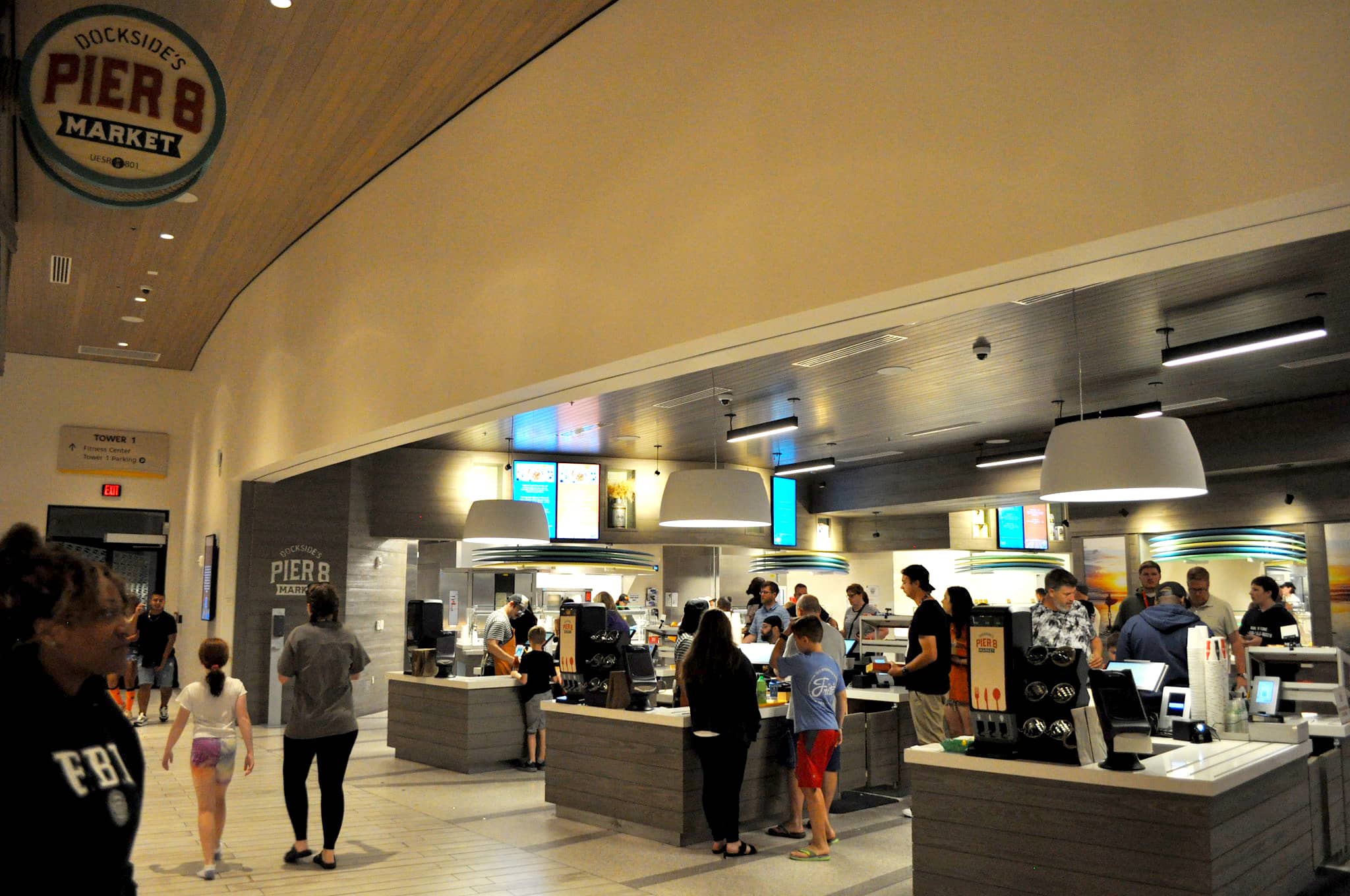 Universal’s Endless Summer Resorts might not have the proximity to the parks and CityWalk of the other on-site resorts at UOR, but they offer a value unmatched in the market. Rates at Dockside and Surfside are typically 25-30% less than WDW Value Resorts, and sometimes even cheaper than nearby off-site chain hotels. When you consider the free on-site transportation and early entry to the parks, Universal’s newest hotels are an incredible deal in a saturated market.

When Epic Universe opens, Dockside and Surfside will actually be closer to the new theme park than any other current Universal hotel, and the resorts’ proximity to I-4 make them convenient for other Orlando-area attractions, including WDW. While we ended up moving to Royal Pacific Resort the following night to take advantage of that resort’s Unlimited Universal Express, we absolutely would stay here again and highly recommend Dockside Inn and Suites to others looking for inexpensive lodging while visiting Universal Orlando and even other Orlando-area attractions.

I've never stayed at a Universal Resort (though I have been to all of them many times as I do walks with friends to get exercise), but my one memory of going into one of the rooms was when they were doing employee previews of Sapphire Falls. I went to visit someone in one of the guest rooms and pulled to open the door to the restroom and the door fell off the hinges. He was like "yea...the place was built really quickly" haha. By no means is this an indication I don't like the resorts or think they cheaply built (though they probably are) it was just a funny moment.

I stayed at Surfside last New Year's Eve and it was really nice given the value status. The buses on the way back to my hotel room were also practically empty. I highly recommend it!

In my experience, Universal's hotels provide a far superior value to anything at Disney, with Endless Summer the cheapest of the bunch. That said, I did have problems with noise coming from adjacent rooms when I stayed at Surfside last year, making me unlikely to book Endless Summer in the future. (Thin walls = lower prices.) I'd rather pay a bit extra (but still less than anywhere at Disney) for Aventura or Cabana Bay.

But if your budget is tight, bring a pair of earplugs as insurance and enjoy Endless Summer.

Funny timing — I just booked a room at Cabana Bay after coming *very* close to snagging a room at Endless Summer for next September. They've got a deal going on right now for 25 percent off the rack rate at their value and value plus resorts, for those looking to get ahead of things for next years Horror Nights (halloween is forever, after all).

I ended up going with Cabana Bay because it's an easy walk to Volcano Bay and the rest of the Universal Orlando Resort, but the temptation to save an extra couple hundred bucks at Endless Summer was tempting. If I was staying for longer than five nights, or if I was visiting more than Universal on my trip, I'd be more tempted to give this a go.

The lazy river at Cabana Bay was also a factor. Thanks for the write-up!

We did consider booking at Cabana Bay since our primary motivation for this particular night's stay was to have early entry to Volcano Bay, and with Universal Express worthless at the water park, staying at Royal Pacific a second night would have been superfluous (ultimately, we ended up staying in 4 different hotels across our 5 nights in Central Florida). However, Cabana Bay was over $50 more than Dockside when we were searching, so we decided to go with Universal's newest hotel. Even though we didn't spend a ton of time here, I wouldn't hesitate staying at Dockside again if presented a similar value proposition.

However, if we're visiting the theme parks, Royal Pacific will always be our go-to because of the complementary Universal Express (typically being the cheapest of the 3 Deluxe resorts at UO). Even though our night at Dockside was about a third of the cost of our night at Royal Pacific, that savings cannot match the value of the UE perk - though we did feel Universal Express has slightly declined in value since our last visit in 2017 with much longer waits for attractions and the 2 top attractions (Velocicoaster and Hagrid's) both not available on UE (Gringott's was the only ride not on UE in 2017). I'll also note that the bus rides to and from Volcano Bay (and probably CityWalk and the theme parks) are a bit circuitous, but no more so than you'd find at WDW. Pop Century and Art of Animation obviously have the best transportation setup of the WDW Value resorts because of the Skyliner, but if you're going to MK or DAK, you still have to get on a bus (or walk through EPCOT and take 2 different Monorail trips to get to MK). The location of the older Universal resorts will always have the advantage of being able to walk or take a leisurely boat ride to the parks, but once Epic Universe opens, even guests at those resorts will have to get on a bus to get to the newest theme park (and guests staying at the hotels adjacent to EU will need to bus to IOA and USF).

In the end, I think the Endless Summer Resorts (Dockside and Surfside) are perfectly positioned ahead of Epic Universe and present visitors a value that can be difficult to pass up compared to other options in Orlando.

Thanks for the descriptive review, unfortunately this really looks way too familiar to a college dorm vs a Universal property hotel, regardless of its tier status. Seems like they missed a few opportunities with all of the bland and empty sight lines. Forgive me, thats my interior designer in me talking. Outside of that, the lobby looks pretty decent.

Great write-up, Russell. My wife and I stayed at Dockside last November, and she had the same comments as Robert about noise coming from the room next to us. Otherwise, we really liked the hotel. I loved the driftwood theme in the lobby. Pier 8 Market had a nice variety of foods to eat (especially for that level of hotel). We're heading back to UO in a week and staying at Aventura this time. I booked really early in the year when rates were cheap.